14 Things to Know Before You Go to China 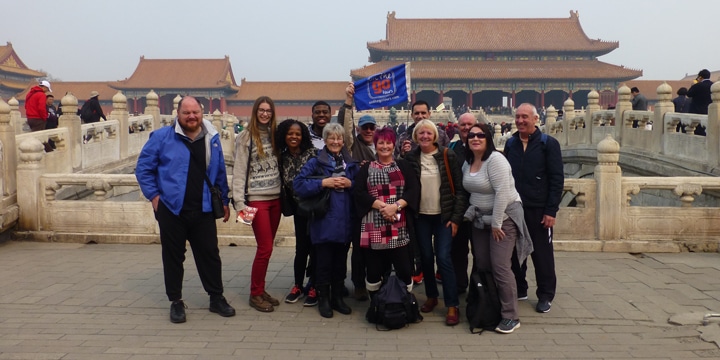 China will amaze you. It’s a land of contrasts. The new and the old. Cities that have been occupied for 3000 years contrasted with new cities that didn’t exist three years ago. It’s a communist country that thrives on the free enterprise system—especially when you’re bargaining for items in the street markets.

I recently completed a nine-day On The Go Tours itinerary titled Great Wall and Warriors. I’m a fairly experienced traveler. I’ve been from Saipan to Saigon, the upper Amazon to the lower Serengeti. I’ve swum with the sharks and run with the bulls— but nothing prepared me for China. Whatever preconceptions you might have of the country, put them aside.

A few tips you should consider before you go to China:

1. Consider going with a tour company
The best way to visit China is with a tour group. In my experience, there really isn’t another viable option unless you’re traveling with a person conversant in Chinese. If you think you can open a phrase book at a restaurant and rattle off an order, think again. That’s where a tour guide comes in. Not only do they act as your interpreter, but they also look after all the details that can derail a great vacation: problems with rooms, special medical needs, booking side tours, finding the best places to eat, tipping local guides and drivers, and—most importantly—doing and seeing things that aren’t in any guide book.

2. You must get your visa in advance
If you’re going to be in China for more than a couple of days, you’re going to need a visa—and you’re going to have to get it before you arrive. It’s not the sort of visa you can get at the airport when you arrive. You can apply for it online and it will set you back about $150. When you sign up for a tour, the tour company will usually send you the documents (your hotel and airline confirmations ) you’ll need to apply with.

3. Money…
The Chinese currency is called the yuan renminbi. Generally it’s just referred to the yuan. At this time it’s about seven yuan to one US dollar (up-to-date exchange rate here). There are lots of banks in China. The bad news is not all of their ATMs accept all North American cards. I tried my Scotiabank card at three different banks before I gave up and used my TD card—which worked on first try. The lesson is to take at least two different bank cards and let your bank(s) know you’ll be using them out of country.

Don’t plan on changing money at the bank unless you have lots of time on your hands. Several members of our tour group had problems with their cards and needed to change currency at the bank. They were looking at between 30- and 45-minute waits just to get to a teller.

There is a fair amount of counterfeit money floating around China—mostly small bills like 10-yuan notes (about $1.50). The best way to avoid getting hit with these fakes is to pay with exact change or close to it. If you do get the occasional fake ten-yuan note, don’t fret it; even the locals get the odd one. Look at it as a souvenir.

4. Smog is real
Smog is a major problem in China and not just in major cities. On bad days it’s said that breathing the air is the equivalent of smoking 40 cigarettes! One solution is to wear an air pollution mask while you’re there. Don’t worry: You won’t look like a dental hygienist on a lunch break. Lots of people—not just tourists—do. Here’s an excellent article on choosing the right one.

5. The weather can be unpredictable
In the summer it can be hot, with temperatures of over 100ºF (40ºC)! In winter it can get as cold as 4ºF (-20ºC). I was in China at the end of March and encountered sleet in the morning and sun in the afternoon. So hope for nice weather—but be prepared for cold or rain. Bring a good plastic poncho to go over your jacket.

6. Food…
I love Chinese food! So it surprised me that several on my tour didn’t like it—or at least “real” Chinese food. If you don’t like Chinese food, many American fast food chains have locations in the major cities so you’re not totally out of luck. In most places you’ll be given chopsticks. In larger restaurants they’ll find a fork for you if you (or your tour leader) request one. In smaller places or street stands they won’t have forks, so I traveled with a few plastic (so they don’t set off screener alarms) knives, forks and spoons in my day pack.

Generally, the food is safe. But I still suggest taking Dukoral, an oral vaccine, which protects you against traveler’s diarrhea as well as cholera. I also carry some ciprofloxacin (Cipro) and Imodium in my pack—just in case.

7. Bring toilet paper
Toilet paper is generally not available anywhere but your hotel room, so make sure you carry some with you when you’re out and about. You also might want to carry hand sanitizer and napkins, as well. They’re handy if you’re buying any street food.

8. Internet is better with a VPN
Using the internet in China is a challenge as the government monitors it. A number of popular websites such as Google, Facebook, YouTube, and Twitter are blocked by “The Great Firewall of China.”

9. Unlock your cell phone
Your cell phone will almost certainly work in China. If your phone has been “unlocked,” you can buy a 3G basic voice/data sim card for about 66 yuan ($10 US). You’ll still have problems with sites being blocked when you access the internet on your phone, but, as mentioned above, a VPN should help.

10. If you get lost…
Take a few business cards from the hotel lobby desk that have the address of your hotel both in Chinese and English. If you’re lost or want to take a taxi back to the hotel, you can just hand the card back to the driver. I’m told if you’re lost, the police will actually drive you back to your hotel. I haven’t tested this out.

11. Bring some souvenirs
Bring some small souvenirs from home. You can pick up lapel pins or keychains at your local dollar store. If someone is particularly nice to you on the street or in a restaurant, you can give them one. It was amazing to see how much this small gesture was appreciated. They’d insist I pose with them for a selfie, and instantly became my best friend.

12. Security
Get used to having your backpack scanned so many times that it glows in the dark—not just in airports, railway and bus stations, but in all major attractions. Make sure there’s nothing in it like a pocket knife or rocket launcher that might set off the alarm.

13. Know the traffic rules
Being a pedestrian in China is downright scary. Traffic may be far worse in other Asian cities but at least there are rules about crossing streets—namely, once you commit to walk across the street, keep going, don’t stop, and the traffic will flow around you. This won’t happen in China; they’ll squash you like a bug.

Another hazard to watch out for is the electric scooters. They’re everywhere, and because they’re electric they’re silent. You don’t hear them coming. You can also get clobbered by right-turning traffic. In China, like in many cities in North America, drivers are allowed to turn right on a red. But unlike in those North American cities, Chinese drivers don’t stop before turning. They just whiz around the corner as you’re about to step off the curb.

14. Bargain in the markets
If you’re buying things in the markets, such as the Pearl Market in Beijing or the big street markets in Shanghai, you’re expected to bargain. Your guide can generally tell you what the items are really worth. Once you begin a dialogue with a vender, there’s a strong chance you’ll end up buying it. Remember, they’re experts at this, and you’re not.

So a few tips: Starting prices are generally high—very high—and sometimes as much as ten times the actual value! So start low and then work up from there. If they won’t move on the price, walk away. They’ll usually chase you with a more reasonable offer. If not, you’ve established what the rock bottom price is. You’ll probably find the same item at the next stall and be able to bargain a reasonable price.

For more China: A Quick Guide to Suzhou, the “Venice of the East”

For more on China with On The Go Tours, visit onthegotours.com/China.