4 Days of Golf in the Tar Heel State

So say the later lines of “Hark the Sound,” the University of North Carolina at Chapel Hill’s alma mater—and as a Tar Heel myself, so say I. I studied journalism and great basketball at the school between the fall of 2006 and the rise of 2010, which by alma mater logic entitles me to an eternal home in North Carolina, even as the miles I travel beyond Franklin Street pile up. Born, bred, dead.

But I’m not dead, so why did it take me so long to get back to the Tar Heel State? Three years removed from graduation—and just as UNC baseball and Danny Green are heating up—I finally found the time to leave the great white north for the summery weather and heavenly barbecue I’d missed so much. And in the northern Outer Banks (the OBX, in car sticker context), it turns out that the golf is something to be missed as well. Why? How about a quick five reasons:

1 The beauty of the Outer Banks – The famed coastal scenery of the Outer Banks plays extremely well as golf course putty. The designers tasked with shaping it into playable holes did a commendable job incorporating the area’s distinct vibe into their work, particularly at the Currituck Club and Nags Head. The vistas, the vegetation, even the rainbow-spotted vacation homes aglow in the salt-tinged sea air—the really great OBX holes (and there are many) really feel like they could be nowhere else.

2 A challenge for every golfer – Between the five main golf courses in the Northern Beaches of the Outer Banks, there is a worthy adversary waiting for visiting golfers of all skill levels. Most noteworthy is the contrast in fairway widths. In order from widest to narrowest, that means more difficult plays in narrowing from:

3 Value for your green fees – For the quality of play you’re being offered, the OBX five offer pretty reasonable green fees, which themselves can be chopped further down with the purchase of a package through OBX Golf. Here’s a quick glimpse at prices in the peak of summer, which starts in late June at all five:

These may not be home course rates (especially at the Currituck Club and Nags Head), but you’re not at home, are you? As I’m not convinced that argument makes sense, I’ll supplement it with praise for the quality of play you’re paying for (especially at the Currituck and Nags Head). Plus, outside of the cresting mid-summer tourist wave, prices drop, and weekends and twilight hours offer further discounts. Check out full pricing details for each embedded in the links above.

4 The wind – There’s a lot of it, make no mistake (the National Weather Service actually recommended the area to the Wright Brothers for their experiments in flight because of its extreme winds). And wind can make golf difficult, so why is this a plus? The way I saw it, the challenges introduced to your game by Outer Banks’ winds (which average close to 14 mph) are part of what give these OBX courses their character—not unlike the famously gusty links courses in British Isles. In a game so grounded in the struggle of man against nature, it seems only right that different regions should come at your game with an arsenal of challenges true to their geography. Windy conditions are the OBX at full-strength—which makes victory even sweeter or defeat more justifiable (“It was the wind!”).

5 Convenience – Not only do all five OBX courses (plus two more, represented as numbers 2 and 7) fit on the same map, but it’s also a small map! The Pointe, the Carolina Club and Kilmarlic are practically visible from eachother’s tee boxes, and the desire for greater challenges at the Currituck Club or Nags Head requires only a half-hour drive across the scenic Currituck Sound (by way of the Wright Brothers Memorial Bridge). Whether you want to come for the golf and stay for the rest, or vice versa, your tee times won’t pull you far from your other plans—or your rental home.

The northern Outer Banks
The Outer Banks of North Carolina blanket a nearly 200-mile stretch of barrier islands just off the state’s Atlantic coast. Map-wise (and this is a good map), they run thin and smooth to the effect of appearing man-made—almost as if some early Tar Heels saw a need for more clear definition to the state’s otherwise-rugged eastern edge. With all those miles of beaches come countless beach communities, each fitted with varying degrees of vacation-worthy beaches and infrastructure.

The Northern Beaches, however, are where the golf is (unlike the South Carolina coast, which is loaded with courses top to bottom)—and the golf here is at least five reasons worth of good. In Currituck and Dare Counties, which hosted my return to the Tar Heel State, you’ll find much more than golf at your disposal, including:

The Carolina Club, Grandy, NC
With the cheapest green fees in the OBX upper echelon, the par-72 Carolina Club is logically a favorite among local sticks (or as the website will tell you, a “Locals’ Choice”). To my eye, there were a few exceptional holes, highlighted by the 7th and its spectacular island green, but most hovered around the “good” mark—which for the “Locals’ Choice,” especially, is really pretty exceptional.

There’s a fair amount of water spread around this 18, but it’s rarely very aggressive, apparently more content with inciting the flash of a camera than the splash of a golf ball. In fact, my lies at the Carolina Club were almost exclusively great, which is a nod to the conditioning as much as anything. Apparently, that’s what can be expected when management’s other hand is in sod farming.

The Currituck Club, Corolla, NC
Like his father and brother before him, Rees Jones is an eye-catching name in the world of golf. At the Currituck Club, the master designer has left his signature all across this remarkable course, which was my favorite of the three I played.

One by one, the holes here (particularly on the front nine) channeled the soul of the modern Outer Banks with the mastery of their maker, with distracting vistas (of both the Atlantic and Currituck Sound), tall grass, bridge-laden marshes, and animal life all in abundance. People even get married on the 7th hole, presumably in response to its stunning location and not careless golf bets.

Though it was not the only one to feature colorful vacation homes on its property, it featured them best, and I would point to the bowl-like, par-3 11th hole (perhaps my favorite on in the OBX) as exhibit A. The wind played tough, but not too tough.

Kilmarlic Golf Club, Powells Point, NC
From its championship tees, the par-72 Kilmarlic Club is listed at 6,560 yards, a number that by itself might make this Tom Steele 18 sound like an easier play. Well, not really. The two-time host of the North Carolina Open and current home of the OBX/ODU Intercollegiate (won by Georgia Southern last year) is a challenge worthy of top golf talent, and its tight fairways do most of the damage.

If you’re up for the challenge, you’ll be rewarded with more than a few clever, oak-, pine- and dogwood-lined holes, including the par-5 12th. And as it is the newest of the area courses (it opened in 2002), it offers great facilities and the opportunity to rent a cottage (the Kilmarlic Club Cottage) right beside the first hole. 215 Westside, the club restaurant, and bar, is outfitted with a great Bloody Mary and killer BBQ pork nachos.

If not for Andrea…
Unconcerned with my expiring schedule in the Outer Banks, Tropical Storm or something Andrea marched on through towards the end of my stay. The rain she brought with her shut down my golf game, which meant I was forced to save two of the five courses for next time. Still, a lead on both:

A few post-round eats
There will be plenty of suiters for your appetite on the Northern Beaches, where the seafood in particular is fresh and plentiful. Here’s a quick list to get you started:

Where to stay
Most of us know that beach houses are the accommodation-of-choice in the Outer Banks, and options are available in practically every shape, size, and color you can dream up. The Kilmarlic Club Cottage can even put you a front door away from the first tee. But there are alternatives, and the Sanderling Resort is as good an alternative as they come.

The recently renovated property is itself just a warm and breezy walk (over a dune) from its own Outer Banks beach—not to mention two pools, a spa, fine dining, luxurious rooms, and a gorgeously simple, all-pervasive aesthetic. Its a four-diamond option, and it deserves it—if only for its eggs benedict breakfast at the Lifesaving Station (restaurant).

Helpful tip: Does a golf massage sound like a real thing to you? Well, at Kathleen Hahn’s (she’s great) AQUA Restaurant & Spa, it is, and it really is worth checking out. The treatment is strategically designed to revitalize your most important golf spots (shoulders, forearms, back), and it did—my terrible shots felt great the day after my hour at AQUA.

Even if you pass on the golfer’s massage, don’t forget that it’s a restaurant, as well, and is idyllically nestled against the water. Grab some drinks, play cornhole (they have it), whatever—the vibe is amazing. 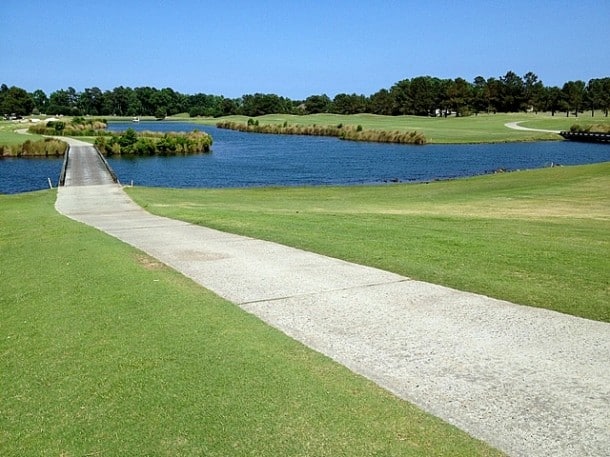 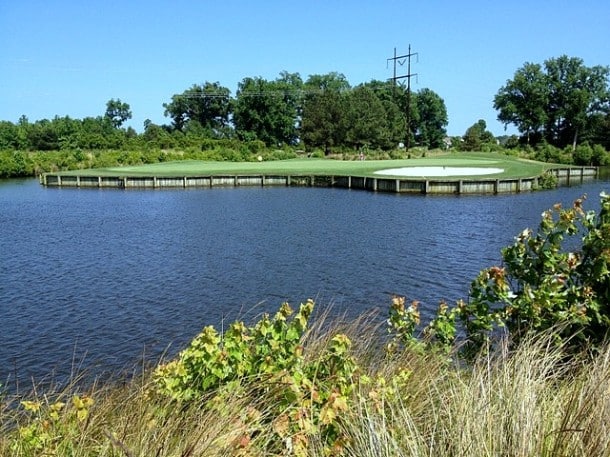 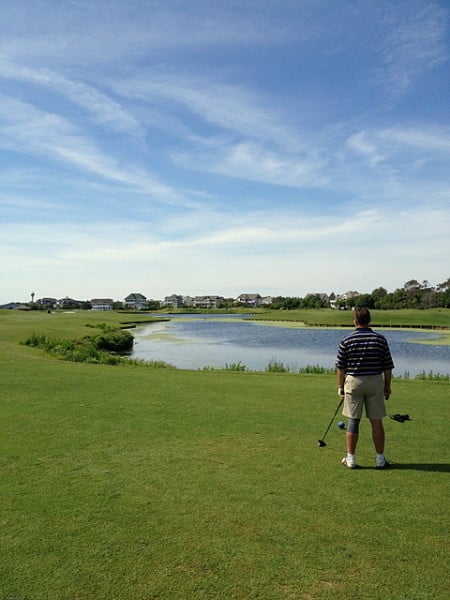 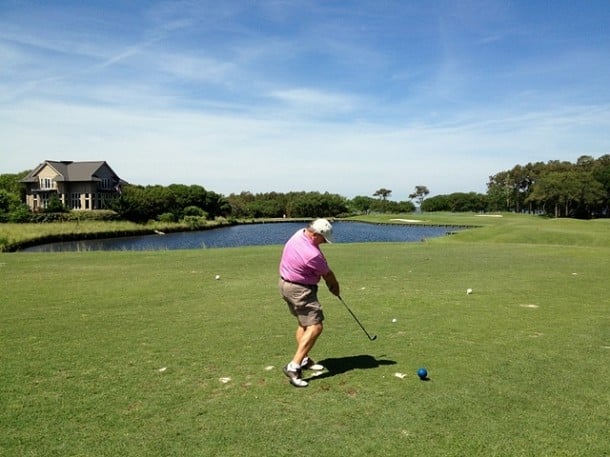 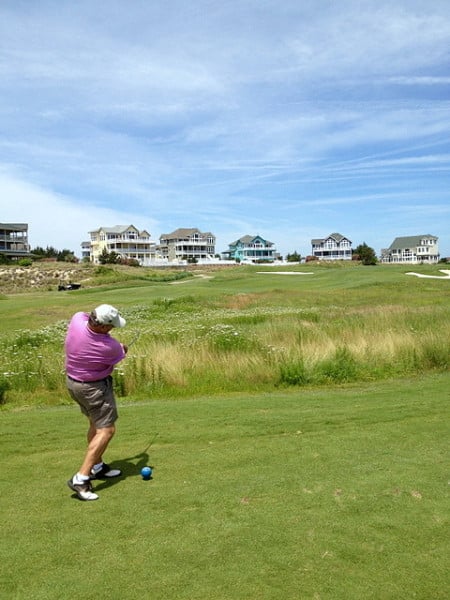 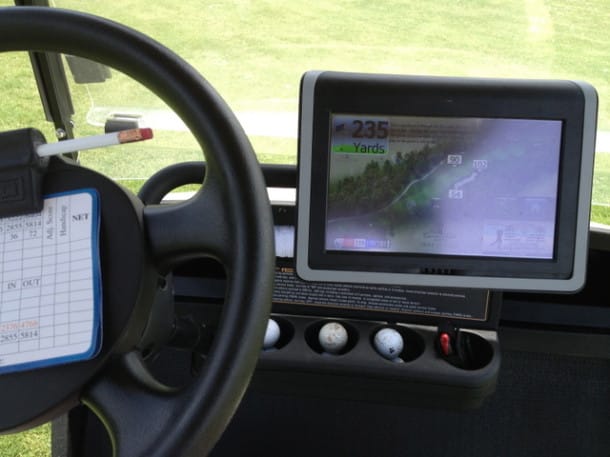 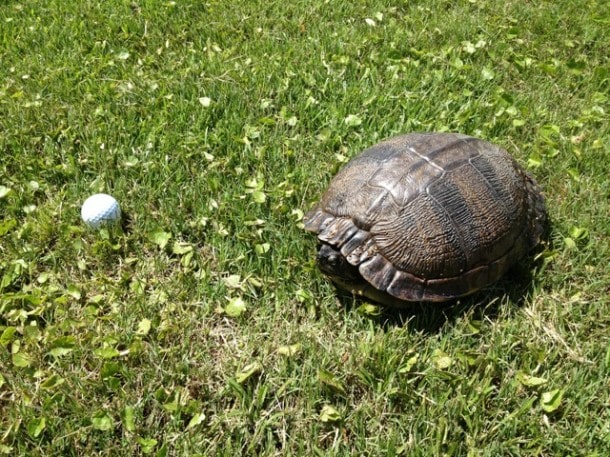 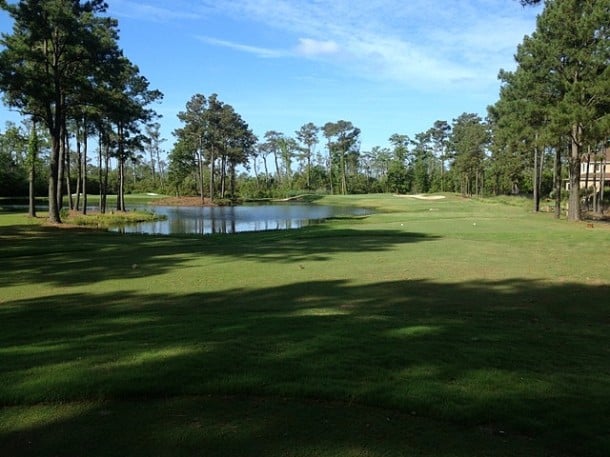 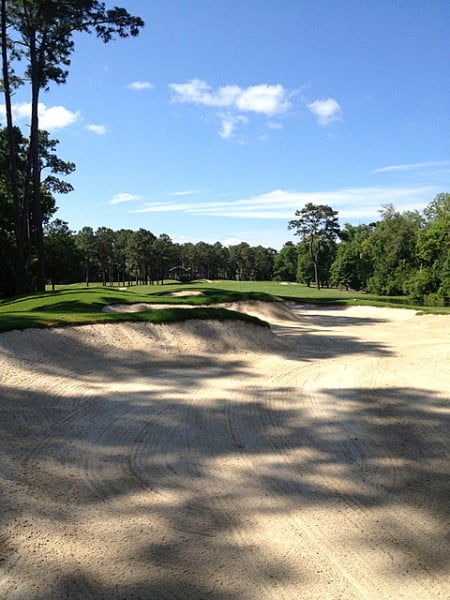 Good lie for me 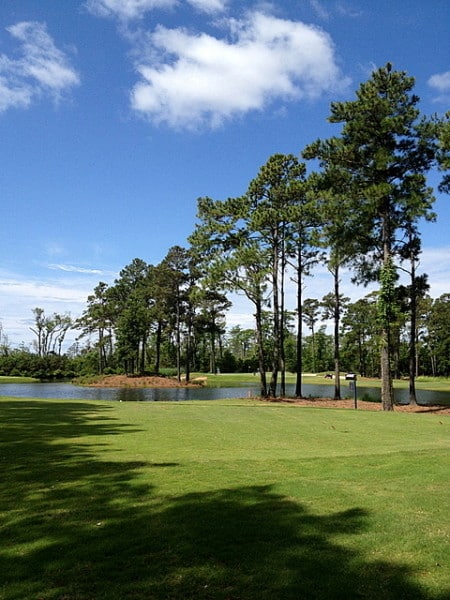 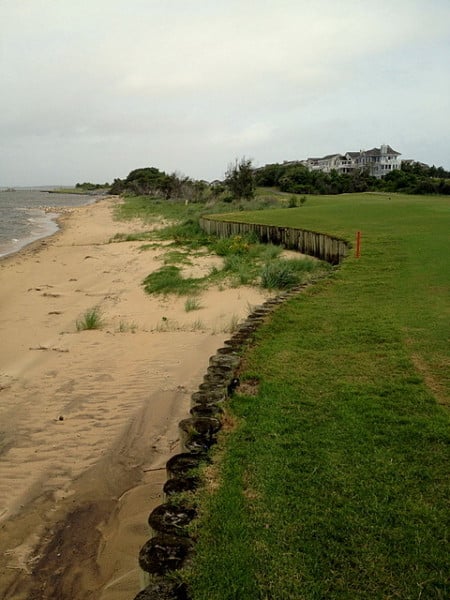 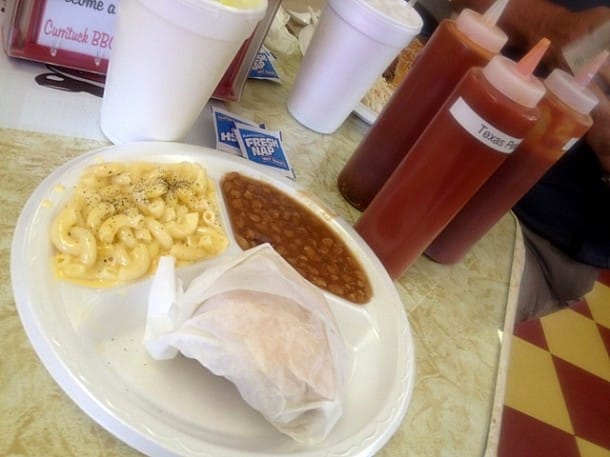 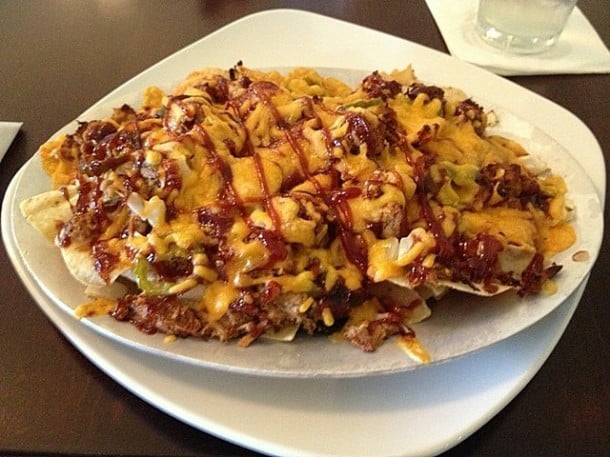 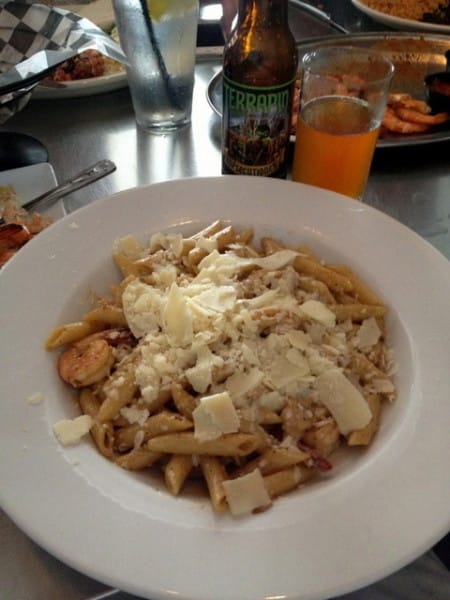 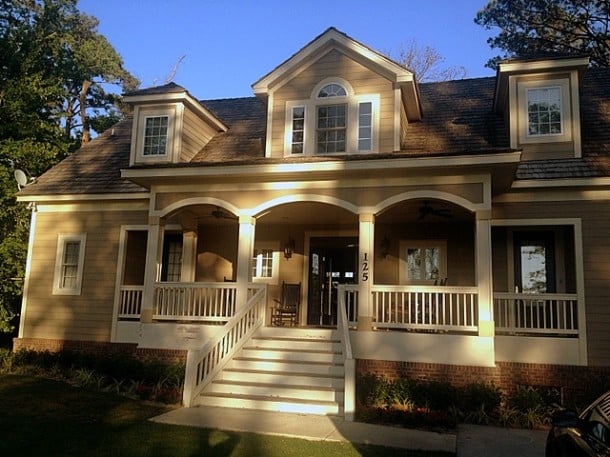 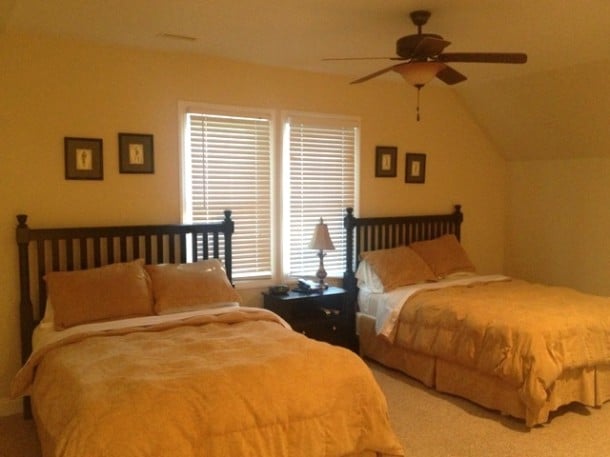 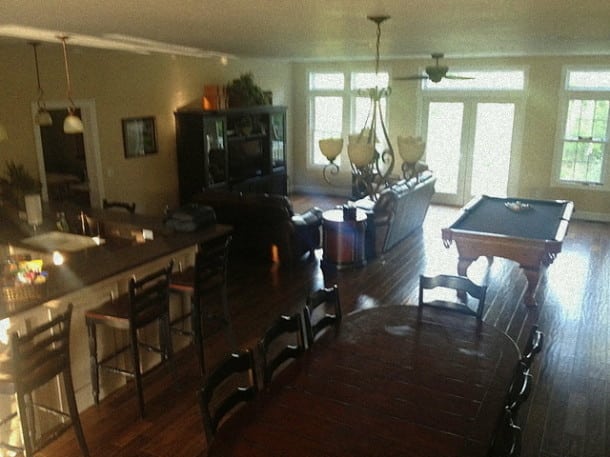 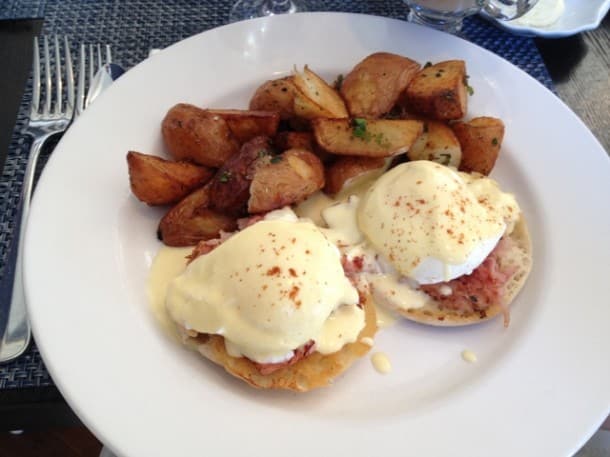 Eggs benedict at the Sanderling