Baker Vail grew up wanting to escape New Jersey from an early age. Her first escape was to Manhattan. After graduating with a BFA from the School of Visual Arts, she worked as a professional photographer for many international magazines and advertising agencies. Over the years there have been many wonderful forays to foreign lands. Currently, she lives in Rowayton, Connecticut and works as a map illustrator. Her work can be seen at smallworldmaps.com. To quote Baker, "Making maps is a dream job. It's like I get to travel somewhere new every day."

I’ve always loved university towns, and New Haven is no exception. New Haven is well known as home to Yale University and thus a lively cultural center has sprouted up around it. It’s one of Connecticut’s larger cities, and worth a visit. Here’s why:

Getting there
By car: New Haven sits along the coast of the Long Island Sound off I-95, making it accessible by car, but you don’t need a car once you’re there.
By train: $30 gets you a round-trip ticket from Grand Central Terminal in Manhattan to New Haven in under two hours, with several stops along the way to jump on if you already live in Connecticut. And it’s only a ten-minute cab ride from Union Station to downtown. Have them take you directly to your hotel or New Haven Green on Chapel Street if you’re day-tripping it.


Tip: New Haven Restaurant Week will be running November 2-7, at rates of $18 for lunch and $32 for dinner. Restaurants participating in this event are marked with an asterisk (*) below.

For the kids
Yale Peabody Museum of Natural History (170 Whitney Avenue; 203-432-5050)
Most known by the public for its Great Hall of Dinosaurs, which includes a mounted juvenile Apatosaurus and the 110-foot (34 m) long mural “The Age of Reptiles,” it also has permanent exhibits dedicated to human and mammal evolution, wildlife dioramas, Egyptian artifacts, and the birds, minerals and Native Americans of Connecticut.
Hours: Monday through Saturday 10:00 am to 5:00 pm; Sunday Noon to 5:00 pm.
Admission fees: $9 for adults; $5 for children ages 3-18.

A little New Haven history
New Haven was founded in 1638 by English Puritans and laid out according to what is now commonly known as the “Nine Square Plan,” which involved a clear central space (New Haven Green) with eight squares around it. The downtown area is now centered around the 16-acre green and is the resting place for 5,000+ souls who succumbed to various iterations of influenza in past centuries.

New Haven is full of firsts, including: 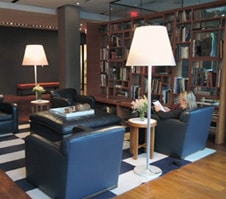 is the “smart” choice if you’re after stylish accommodations in New Haven. And not only because it’s a block away from the Yale School of Architecture and Yale Repertory Theatre, but also because of the comfy rooms and attentive service. The location is ideal for experiencing New Haven on foot.

Each guest room features a comfortable leather chair and reading lamp, extended window-facing work surface, a lofty feather-topped bed, iPod music dock, and an extra large shower (no bathtub). The comfy lobby is outfitted with soft lounge chairs, an array of periodicals and a floor-to-ceiling bookcase filled with a selection of books chosen by the Strand Book Store. There a the wonderful destination restaurant Heirloom right off the hotel lobby. (203) 503-3900

Tip: Guests can request FREE tickets to Yale Repertory Theatre and sports tickets for Yale games by asking the front desk. Subject to availability and on a first-come, first serve basis.

See, weren’t you smart to come to New Haven?

1 Comment On "A Fall Weekend in New Haven, Connecticut"

This past weekend, we celebrated Memorial Day in the United States. It’s my favorite weekend of the year and there’s no other place I’d rather be than in Connecticut with my family…

Stickball After the Rowayton Memorial Day parade, my friends and I headed to the Community Center field where we play our annual stickball game. Growing up, we played every day in… 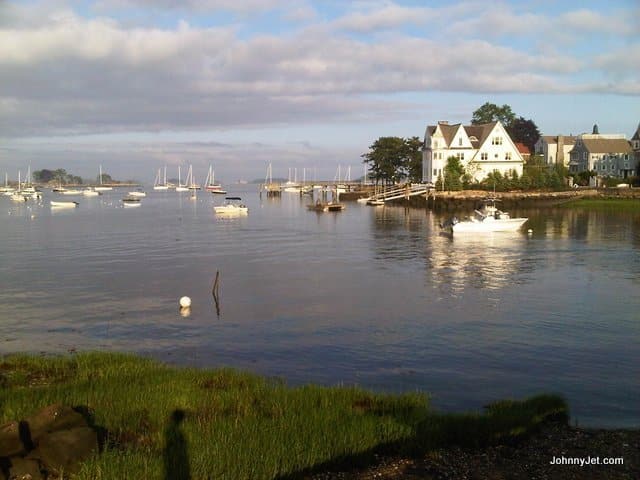 Anyone with ties to Rowayton knows that there’s no better time of year to come back than Memorial Day.