This is the first part in Laura Pedrick’s four-part photo journey through South Africa. Part 2 will be live tomorrow.

If you’ve ever dreamt of visiting Africa, why not make South Africa your destination of choice? Of the 54 countries that make up this vast continent, South Africa has the distinction of having the third-largest economy and its southernmost city of Cape Town holds the number-one spot for tourism. It’s vibrant, it’s versatile, it’s contemporary, and with the dollar being so strong, it’s got great value for the money.  It’s one of the most desirable destinations in the southern hemisphere.

Though there are a gazillion places to go and things to do in this modern country, I’ll speak to my own personal experience of having visited two of the three iconic destination cities this summer—Johannesburg and Cape Town (the third is Durban)—as well as a few outlining regions: Clarens in Free State, the wine country of Stellenbosch and the safari grounds of Thornybush Private Game Reserve.

Getting to South Africa
First things first. The flight—it’s long (15 hours), so be prepared. South African Airways flies non-stop from JFK to Johannesburg every day for roughly around $1,200. For US or Canadian passport holders, no visa is needed nor is there a vaccination requirement. Its currency, the Rand, is about 14 to the US dollar, which continues to increase in value. And if you intend to rent a car be advised that it’s left-hand driving.

After retrieving my bag at Johannesburg’s Tambo Airport, I meet up with two other travel writers who were also invited on this twelve-day press trip sponsored by South Africa Tourism. We connect with our driver and tour guide, Bongani of Tourvest Destination Management and he takes us to the Maslow Hotel where we’ll stay our first two nights. My first impression of Johannesburg during the half-hour drive is how modern it appears, and that there is new construction and signs of a healthy economy everywhere—except for the shanty towns surrounding the city.

Since we check in late morning, my intention is to stick it out until evening—no sleep for the weary—and resist the urge to take a nap. But that doesn’t mean that I can’t relax with a 90-minute “African Goddess” facial at the hotel’s Africology Spa. So after quickly refreshing in my swanky suite on the top floor, I head to the spa and blissfully go catatonic for a spell. Junior suite at the Maslow is 2,408 Rand (about $172 at the current exchange rate).

Johannesburg
My first full day in this bustling city begins with a visit to Alexandra, an outlying township whose population of approximately 176,000 consists of government housing and shacks. 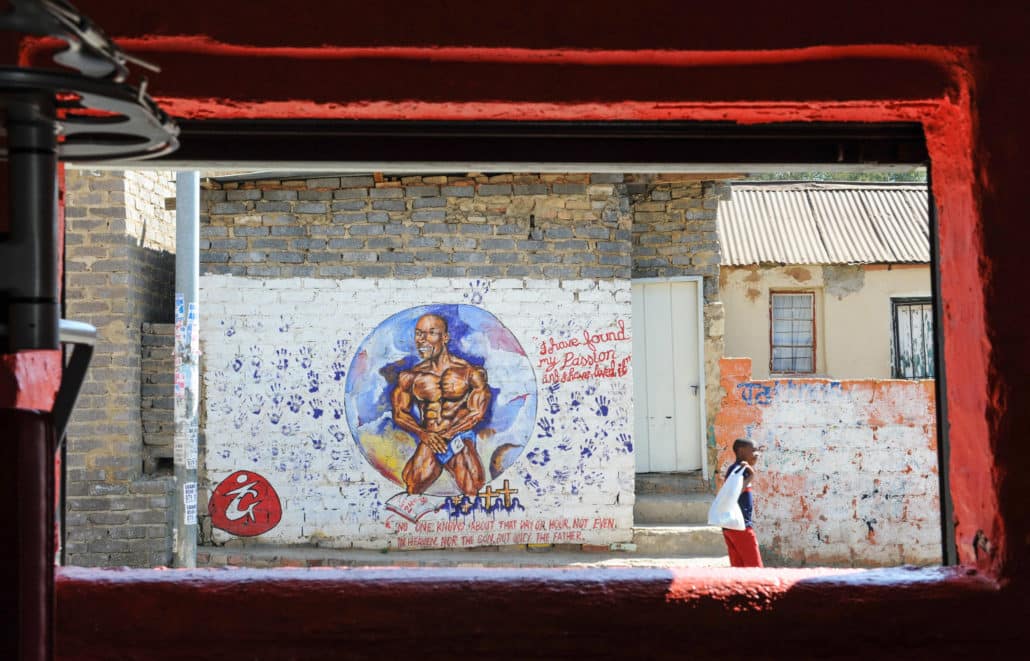 Our introduction is through the Maboneng Township Arts Experience, an initiative, established in 2001, that enables buyers and art enthusiasts to come see exhibited works in the homes of local artists. Those who can’t get their works displayed in a formal gallery can get exposure and potential revenue from the sale of their works as well as fees from the tours themselves.

This tour, as given by Asandra with Tours 2.0, takes us to the homes of Siphiwe Ngwenya, the founder of MTAE, and Tumi Masite, a physically imposing yet soft-spoken man who in addition to creating vibrant, energetic paintings runs a popular bodybuilding gym out of his home. 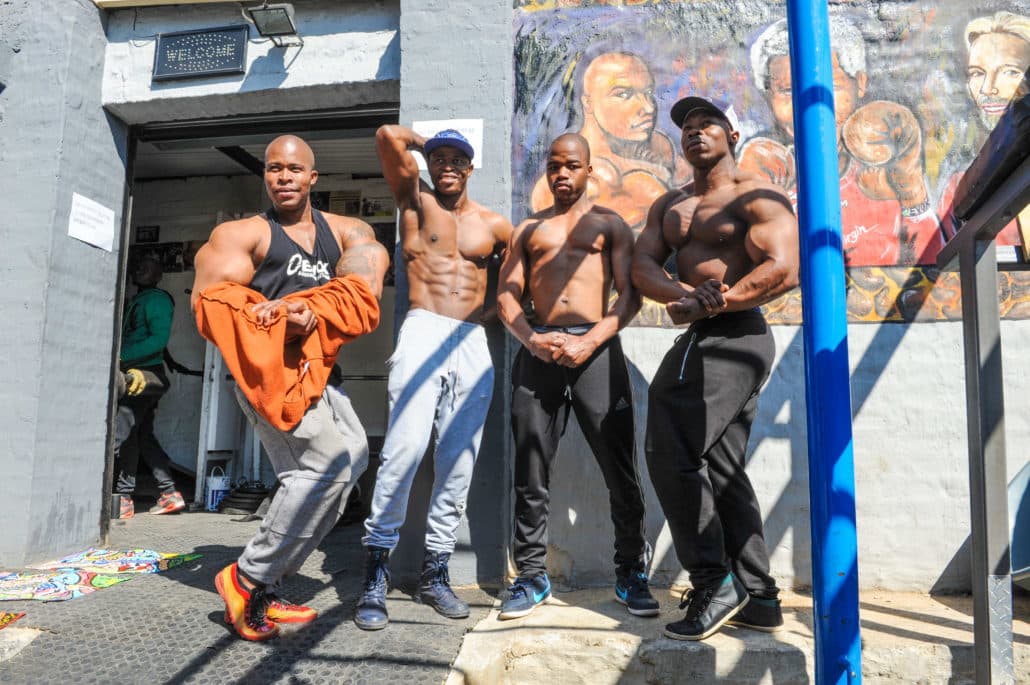 As we look at recent works that he displayed for us on the ground in front of his grandmother’s house, men nearby lift weights and pose nearby.

Next up, lunch at Joe’s Butchery, the township’s most popular barbecue, or braai as it is better known. Customers have the option to buy uncooked meat or have it braaied to take home. There’s also casual seating and on Sundays live music helps pack the place from 10 am to 9 pm.

Heightening our Alexandra lunch experience are Willy’s colorful stories about near-encounters with Nelson Mendela and his passionate opinions about local and national politics. Until meeting Willy, I didn’t know that President Zuma had five wives! When asked how long Zuma has been in office: “He’s been president since he avoided going to jail the first time!”

Closing out the day is dinner and a standing-room-only live performance by Shabaka and the Ancestors at The Orbit jazz club in Bramfontein, a central suburb of Johannesburg, known for being an arts and entertainment hub. And wow, what a treat! A soulful and mesmerizing set that addresses racial injustice and channels light from the elders, hence the title of their latest album “Wisdom of Elders.”

Our third and last day spent in Johannesburg begins with an educational tour at SAB, the Willy Wonka of all beer factories given its sheer size and imagination. World of Beer is an impressively detailed interactive trip through the history and culture of beer in South Africa that ends with a tasting of SAB’s “power brands.”

Minus the consumption of alcohol, the tour is appropriate for children. Cost of a tour: about $11 (includes tasting AND vouchers for two more beers).

With a slight buzz on from all that beer, we’re grateful that Bongani can drive our van to Market on Main, a new initiative that provides a creative space in the city that celebrates urban lifestyle, the sale of works by local artisans and designers, and regional foods.

The actual location is a restored and repurposed nineteenth-century warehouse situated in the Maboneng precinct, east of downtown Johannesburg. It’s open from 10 am to 3 pm every Sunday.

Note: Get the Mandela app
If you choose to make a Mandela pilgrimage, South African Tourism has created a great app that can help you customize your journey.

Mandiba’s Journey includes maps, photos, audio and many other features. We did not make that a major focus, but nevertheless we encountered many Mandela stops along the way, including a brief visit to his presidential home in an affluent part of town.

For more on travel to South Africa, visit southafrica.net.

3 Comments On "A Photographer's Journey Through South Africa, Part 1: Johannesburg"