This is the third part in Laura Pedrick’s four-part photo journey through South Africa. Part 4 will be live tomorrow.

We fly to Cape Town by way of Bloemfontein, about a three-hour drive from Clarens. The flight (one hour and 45 minutes) takes us over the country’s Central Plateau (also known as the Great Karoo), a semi-desert scrubland that seems to go on forever. Descending into Cape Town feels like landing in an oasis; noticeably more green, it’s a tidy, colorful city edged in blue where the Atlantic meets its white sand coast. Nicknamed the “Mother City,” Cape Town served as a refreshment stop for merchant ships in the mid-seventeenth century as they were en route to pass the treacherous Cape of Good Hope.

We check in at the Southern Sun Waterfront Hotel, a 537-room resort that is conveniently located in the downtown business district.

It has all the standard amenities you’d expect in a modern four-star hotel: pool, spa, fitness room, restaurant and location just a short drive from the Victoria & Alfred Waterfront, where we plan to have a sit-outside lunch while taking in the spectacular views of Cape Town’s famous Table Mountain on one side and Table Bay on the other.

The V&A Waterfront is home to more than 80 restaurants and countless retail stores and entertainment venues. 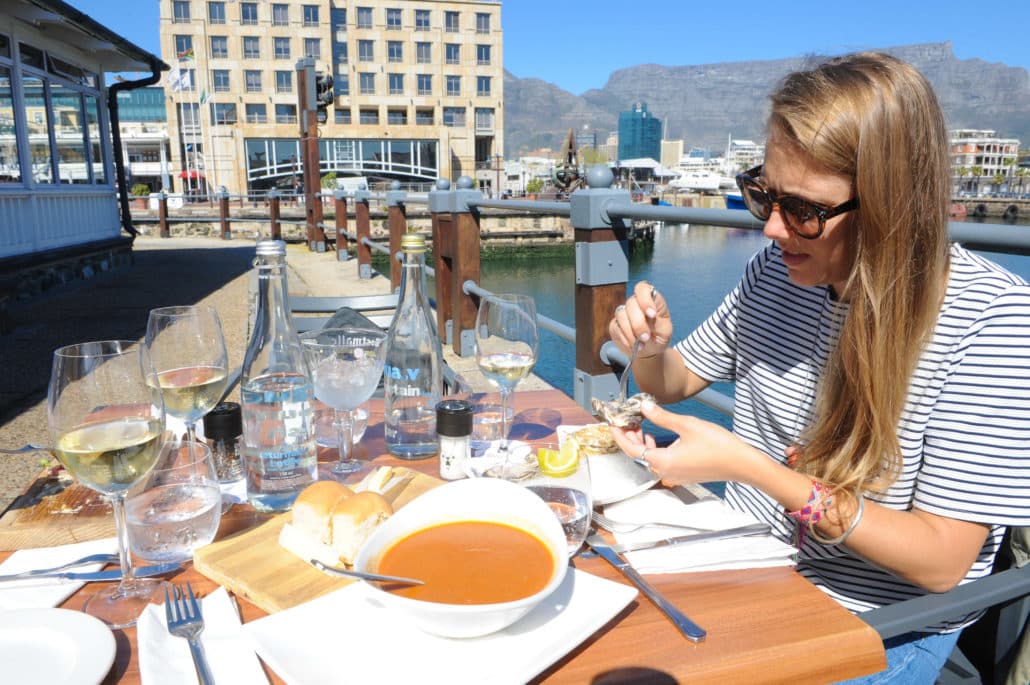 At Den Anker, we enjoy oysters prepared in beer and lobster bisque while watching boats sail into the 150-year-old working harbor. The Mediterranean climate is a relief compared to the fleece-wearing weather we just left.

If you’re going to do one thing in Cape Town, it has to be taking the gondola up to the 3,500-foot summit of Table Mountain, the country’s most famous landmark.

Recently renovated cable cars can bring 65 visitors at a time to the top while rotating 360 degrees during the five-minute ascent.

The view of Cape Town and this continent’s southernmost coast is breathtaking. Also in clear view is Robben Island, site where Nelson Mandela served 18 of  his 27-year prison sentence under apartheid.

What I could’ve done without, however, is getting a near-heart-attack every time I saw someone take a selfie outside of the protective barriers. Come on, people!

On our way back to the hotel we stop briefly at the famously hyper-colored neighborhood of Bo Kaap, established in 1834 when Muslims were released from slavery.

It’s unclear why exactly they began painting their homes and mosques with vibrant colors but it’s a tradition that has drawn visitors for many years.

You can’t fully appreciate Cape Town without exploring the Woodstock art district and a great way to do this is begin with a street art walking tour.

A guide leads us down alleys and back streets that showcased incredible graffiti art, from four-story pieces that covered entire buildings to little installations tucked away in dead-end alleys.

Having an expert identify the artists and the meanings behind their works made this a satisfyingly immersive experience.

The cultural revival that is uplifting this area includes bringing in some of the country’s best chefs. We were lucky to meet one of them, Karen Dudley, owner of The Kitchen.

This neighborhood eatery is wildly popular and is standing-room-only when we stop in for lunch. Well worth the wait.

For dinner we return to the city center and visit Ash, a trendy new restaurant with an open kitchen atmosphere and meat prepared in the old tradition of charcoal cooking.

Before turning in for the night we pop in at The Gin Bar, a hidden little gem which makes the best gin cocktails in the city.

Another Cape Town must is spending several hours touring the Kirstenbosch National Botanical Garden. It is considered to be one of the most beautiful and greatest gardens in the world.

With Table Mountain’s majestic backdrop, the 1,300-acre sanctuary grows and maintains over 9,000 of South Africa’s 22,000 indigenous plant species. The entrance fee is just over $4 and only $1 for children.

On our last day in Cape Town, we take a 30-minute drive to Stellenbosch, a picturesque village that is one of the oldest historically preserved towns in the country.

We schedule a “Classic Cape Cuisine Walk” with Bites & Sites Cultural Food Tours that includes visits to the town center, historic sites, sampling of traditional Cape food, and a wine-tasting.

Highlights of our journey were Schoon—a collaboration of artists and artisans under one roof—Eikenboom Butchery, Brampton Wine Studio, and the lovely Oude Werf Hotel, the oldest hotel in South Africa. For this tour, the cost is about $35.

On the outskirts of Stellenbosch is Vergenoegd, a charming Dutch gabled roof wine estate, which is the only vineyard that I’m aware of that ceremoniously parades a thousand ducks past visitors twice a day.

The ducks play an important role in pest control efforts, eating snails and other harmful bugs in the grape fields.

Seated outside we enjoy the smell of sea air from nearby False Bay while sampling some of this vineyard’s finest wines.

After checking in at the Evergreen Manor and Spa, an establishment that describes itself as a luxury guesthouse with character, we leave for a home visit and dinner in the township of Kayamandi.

This is a suburb of Stellenbosch that was established in the 1950s to house exclusively black laborers working in nearby farms.

Our lovely host, Nocawe, invites us into her grandmother’s home for a meal that begins with boiled sheep stomach (interesting) and Amagwinya (deep-fried fat cakes) and some chicken brai.

After desert she lets us sample some beer that she’s in the process of brewing in her kitchen.

We return to the charming Evergreen Manor late in the evening, sleep hard, and then rise very early to catch our flight out of Cape Town to Hoedspruit, our final destination in South Africa—for SAFARI!

In part 4, tomorrow: Safari with just a touch of luxury.

For more on travel to South Africa, visit southafrica.net.