A Spring Trip through Israel, Part 3: Tel Aviv and Jaffa

It’s not surprising to learn that Israel is a mix of old and new. Millennia of history have gone to create a surfeit of not only written history from ancient times but also a fair share of ruins and relics from thousands of years ago.

In Israel, these elements co-exist with contemporary cultural attributes like skyscrapers, freeways, cutting edge architecture, and the latest in digital technology, to name a few. The point was made especially clear on a drive north from the Negev (in Part 2) to Tel Aviv on a superhighway that would be the equal of an American interstate. As we sped along past citrus groves and fields of green, our guide pointed east to the Elah Valley and the town of Gath, home of Goliath.

It was strange to recall the vivid Biblical story of how the young shepherd slew the giant with a mere slingshot while we sat in a form of transportation undreamed of by the ancients. Tel Aviv is yet another example of the old meeting the new. Founded by Jewish immigrants in 1909, Israel’s second-largest city and its high-rise hotels straddle the coastline then abruptly merge into the old port of Jaffa, which dates back to settlements established around 7,500 BC according to some accounts. From my room on the 18th floor of the urbane Dan Panorama Hotel, I could see from my balcony the old port bathed in floodlight as the last rays of the sun lingered over the Mediterranean. The sight was so beautiful that it nearly took my breath away.

After an extraordinarily bountiful breakfast buffet at the Dan (I got to try my first taste of shakshouka, a delectable Middle Eastern egg dish), I joined a group for a guided bike tour of the city flat enough to make riding a piece of cake. We picked up ours at a nearby rental station that charges by the hour with numerous drop-off stations located around town.

Cycling through the Bauhaus neighborhood along the spacious Rothschild Boulevard, one of Tel Aviv’s major thoroughfares, is easy and pleasant with plenty to see starting with the 1909 Eliassen House, built by one of the city’s 60 founding families. Tree-lined with bike lanes running through the grassy center of the street, Rothschild Boulevard is also home to Israel’s Independence Hall and many top-rated restaurants. It also leads to the Charles Bronfman Auditorium, home to the Israel Philharmonic.

Rabin Square
Another stop on our tour, Rabin Square, is the biggest public square in Tel Aviv, a large expanse of paving stones, a koi pond and fountain that’s illuminated at dusk. On the northern end of the square, a monument marks the exact spot where Yitzhak Rabin was assassinated as he was exiting City Hall in 1995.

Jaffa: 10,000-years-old?
On our ride to Jaffa, we skirted the Mediterranean along the 10-mile long promenade that straddles the beaches on one side and high-rises on the other. We had to share the Tayelet, as the promenade is called in Hebrew, with other bicyclists, joggers, swimmers, walkers, and people on Segways, but luckily March, the time of my visit, is still off-season for beach-goers, so the crowds weren’t that disruptive.

Near the entrance to Jaffa, the port where Jonah was supposed to have boarded a ship before his encounter with the whale, we returned our bikes at a drop-off station and then headed into the historic port city on foot. An even earlier account than the Jonah story marks Jaffa as the place where Perseus rescued Andromeda, a tale obviously taken from Greek mythology.

One of the town’s lofty outcrops of stone rises to 130 feet, which gives Jaffa a commanding view of the coastline and, therefore, considerable military significance, especially in earlier times. Alexander the Great saw its strategic importance and stationed troops here, and Arabs, Crusaders, Ottomans, and Napoleon all took turns seizing the town. Biblically, Jaffa is significant as the place where St. Peter raised from the dead the widow Tabitha and still retains the house where he had a dream that suggested he spread the Gospel to the gentiles.

Arab landmarks include the Mosque of the Sea and the fishermen’s port. Parts of the Old Town have been restored to provide a romantic charm for those strolling its picturesque streets, lined with boutiques, restaurants, art galleries, theaters, and sidewalk cafes. One not-to-miss vista is at the top of Summit Park overlooking the coastline and Tel Aviv to the north.

Last day in Israel
On my last day in Israel, I joined a Segway tour of the city that included another drive along the promenade, then dropped in at the Tel Aviv Museum of Art, a modernist building devoted to both contemporary and classical art and the home of one of the world’s largest collections of Israeli art.
The collections hold everything from earlier works by Van Gogh and Pissarro to modern pieces by the likes of Chagall, Archipenko and Pollock. The new Herta and Paul Amir Building, which opened in 2011, is visually stunning and was described by The New York Times as “a Rubic’s cube doused in bleach.”

In retrospect, I consider my seven-day, first-time visit to Israel a nice blend of old and new, of city and rural, of Biblical and secular. Starting in Jerusalem (Part 1), a cosmopolitan treasure, the itinerary headed south to the Dead Sea, Masada and the Negev for some outdoor recreation and stunning scenery (Part 2), and finally culminated in Tel Aviv, known for its culture and spirited nightlife, and Jaffa, beautiful and romantic in its ancient setting. It was an unforgettable trip.

Israel: Your eat, play and stay travel guide and Where to stay in Tel Aviv + 10 notes on travel there. 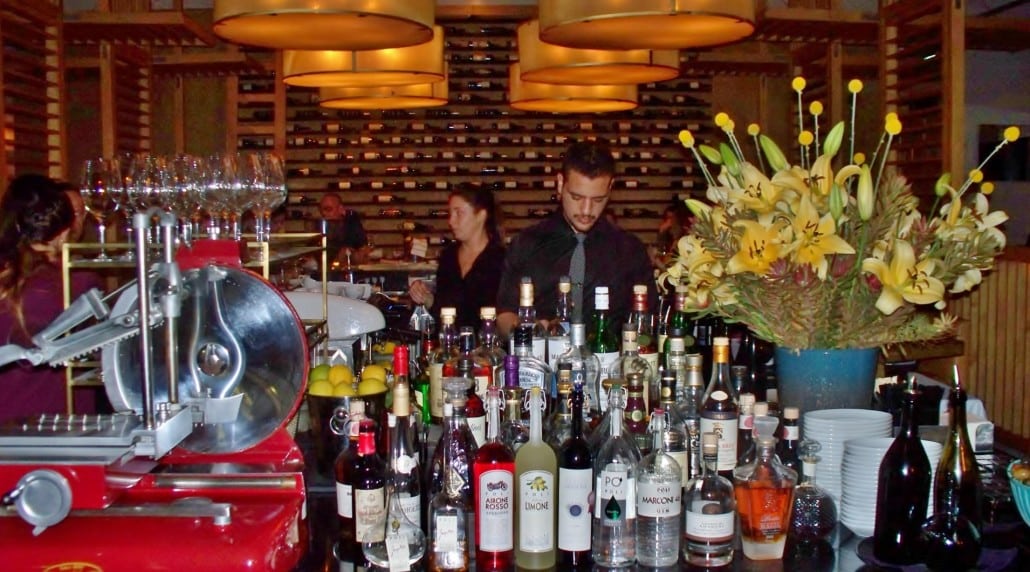 The bar at Herbert Samuel restaurant in Tel Aviv 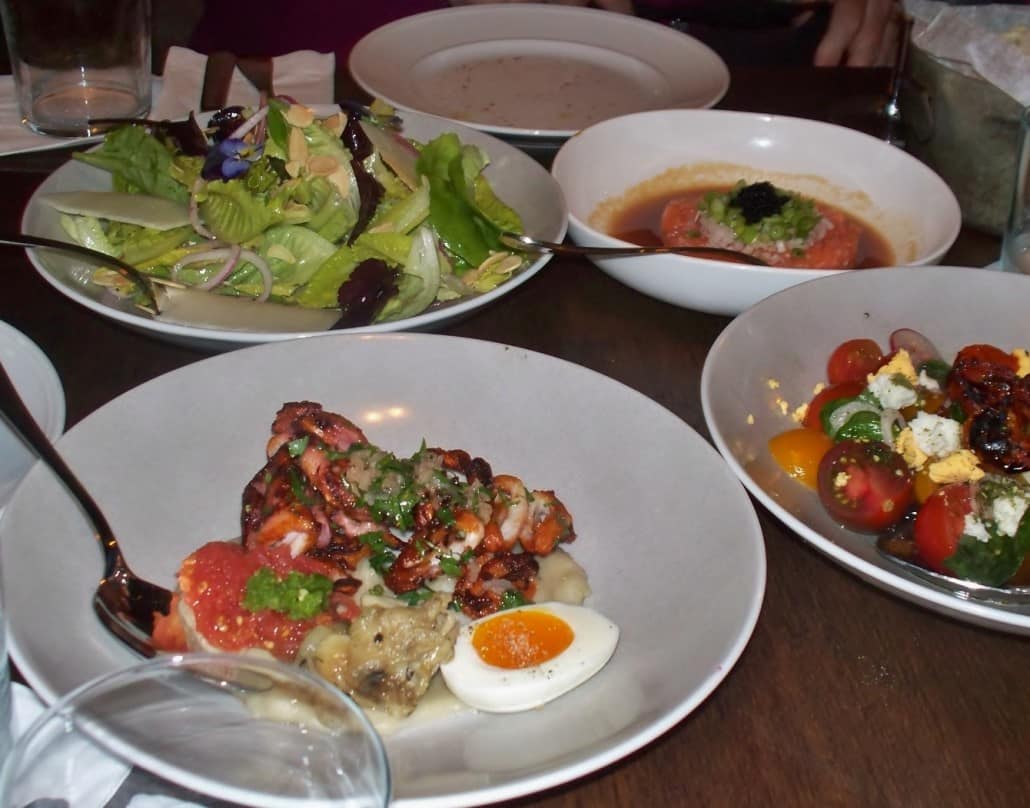 Several of the shared dishes at Herbert Samuel 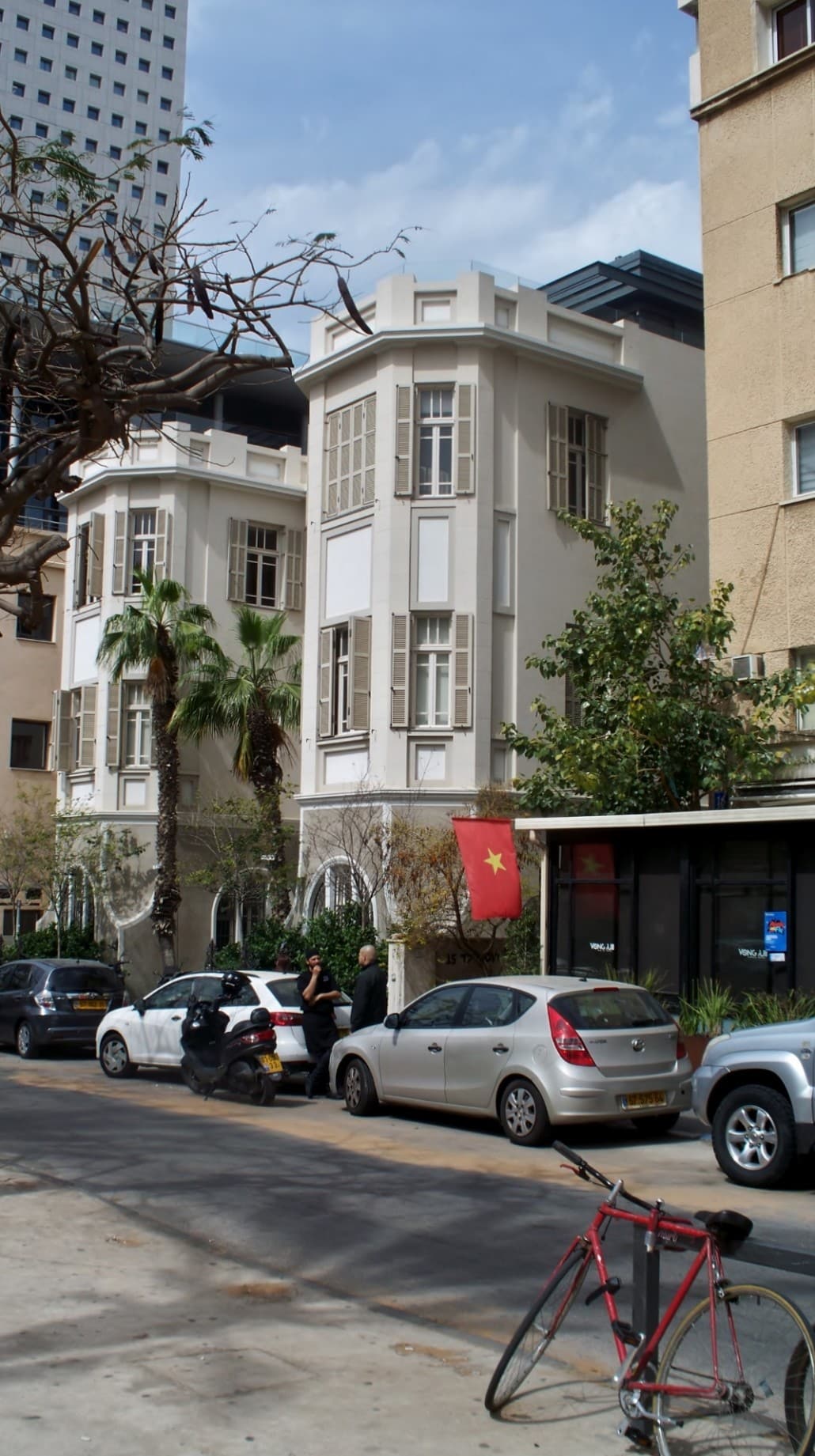 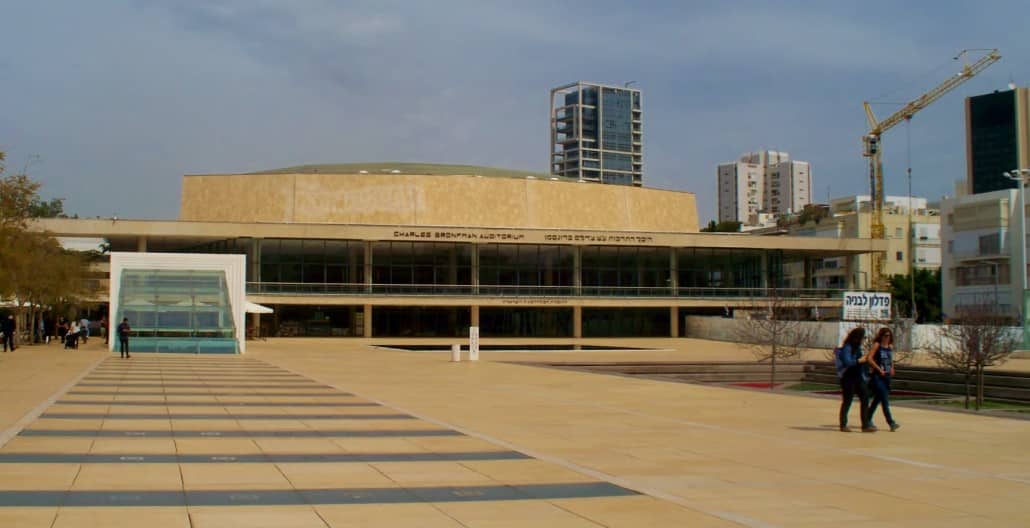 Along the beachfront in Tel Aviv 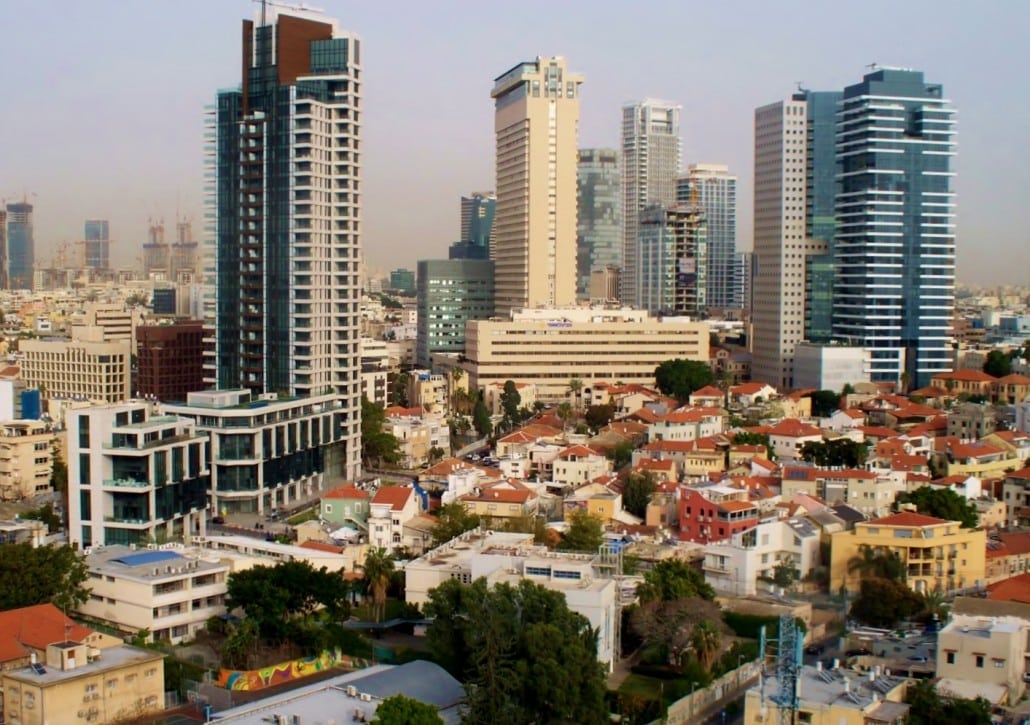 The entrance to Jaffa 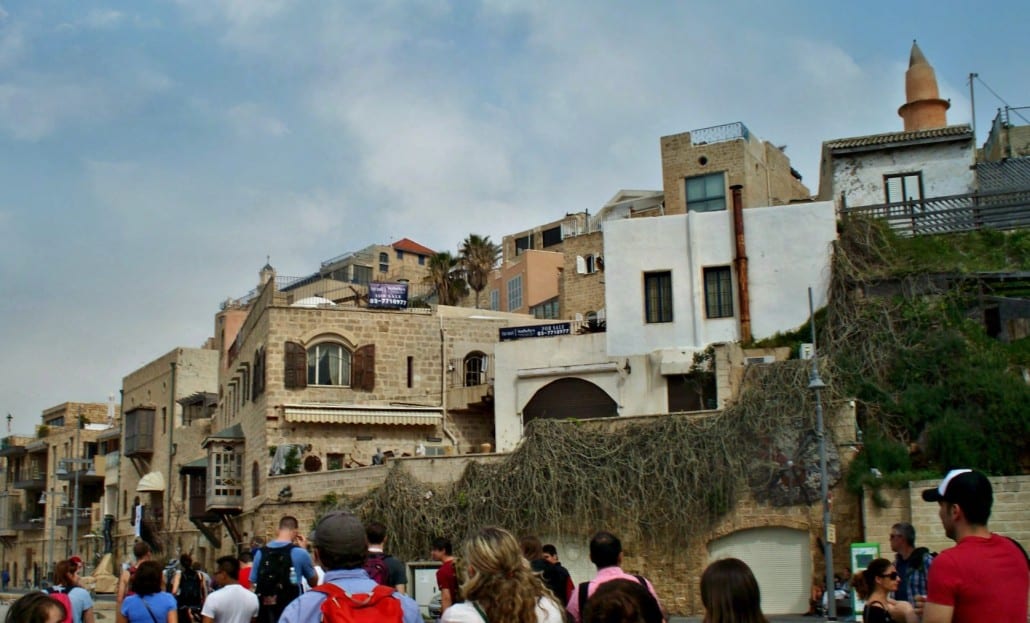 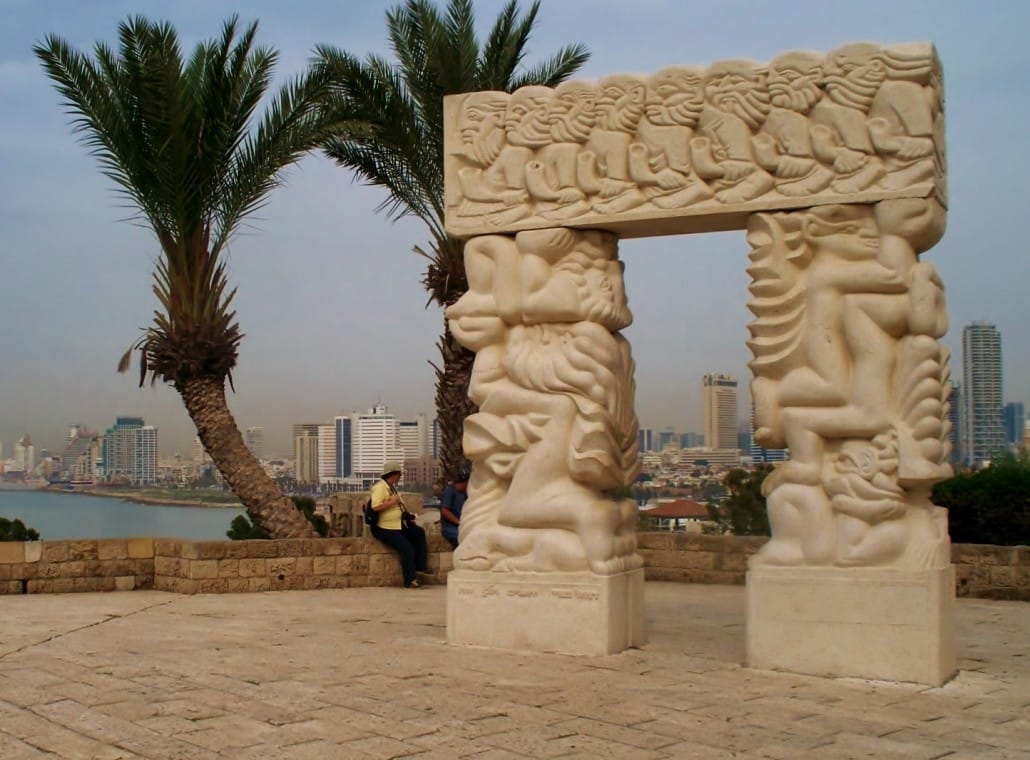 The Performing Arts Center and the Cameri Theater in Tel Aviv 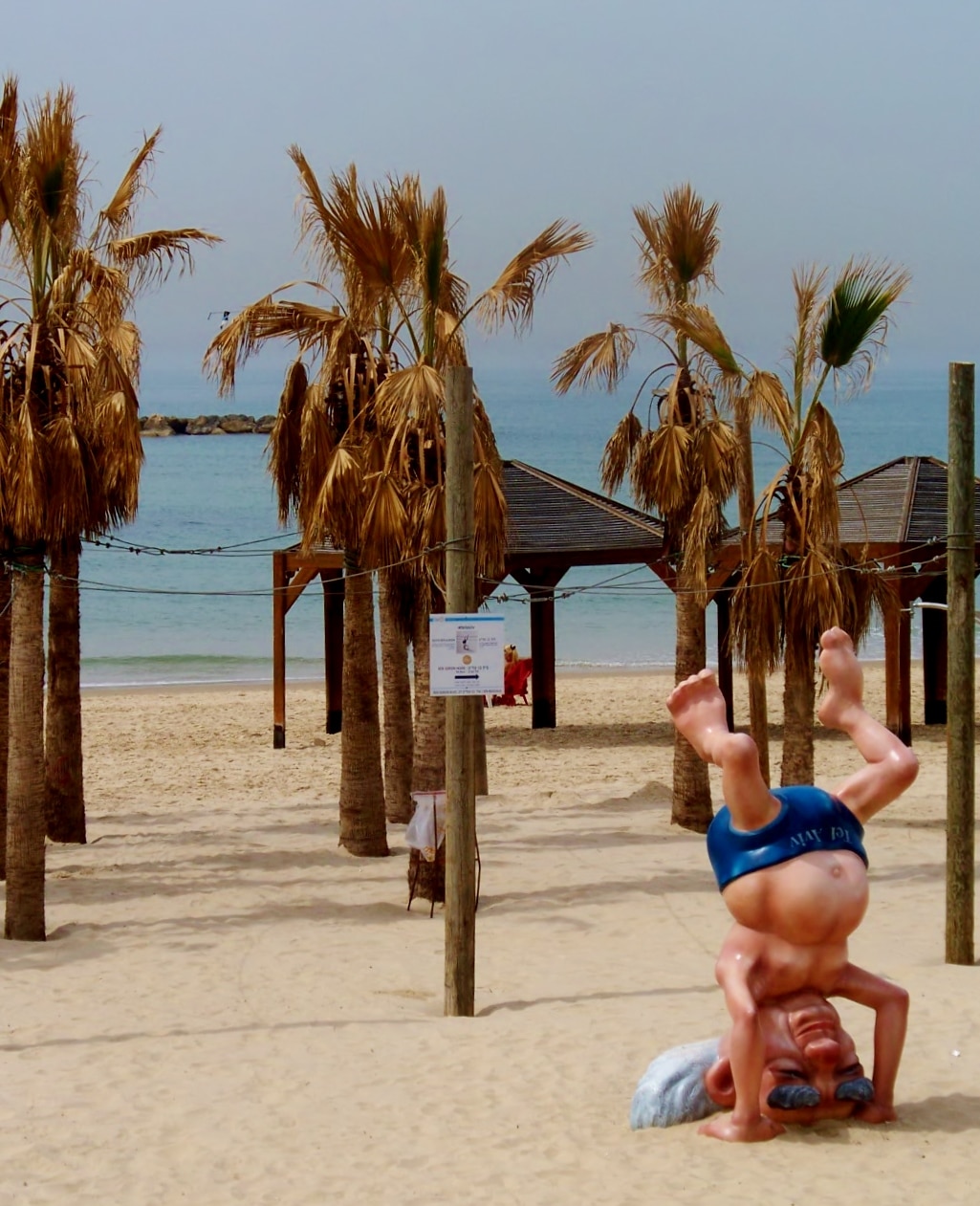 0 Comments On "A Spring Trip through Israel, Part 3: Tel Aviv and Jaffa"