With endless opportunity for winter adventure Le Massif de Charlevoix and Hotel La Ferme in Quebec embody everything you can ask for in a ski resort, right down to the guided luge tour.

Imagine if one of the co-founders of the famed Cirque du Soleil purchased a ski resort and turned it into one of the most returned-to ski destinations in the world, transformed one of the largest farms in the area into a unique hotel experience, and restored a light tram line to the ski resort while all along supporting local artisans and the community. Well, one of them did and his name is Daniel Gauthier. He bought Le Massif in 2002 and has made it one of the most unique ski destinations I’ve ever been to.

Where is Le Massif de Charlevoix?
Le Massif de Charlevoix is located roughly an hour northeast of Quebec City, where it overlooks the St. Lawrence River. The mountain itself boasts the highest vertical drop in eastern Canada and east of the Rockies (770 m or 2,526 ft). There are 52 trails covering 307.6 acres with backcountry treeskiing for all levels and an amazing guided luge trail. It’s also the training ground for much of the Canadian National Ski Team. Ticket prices vary based on your age but for the 18-64 bracket, the price for a day pass is $75.

Backcountry skiing
Skiing in the backcountry at Le Massif is an unforgettable experience. With a guide you’ll bound through waist-deep powder through lines of trees with no other skiers around. There are wide, easier tours and more advanced tours for those looking to challenge their skills. Costs are $129 with a day lift pass and $69 for just the backcountry. You get there via a snowmobile or a snow cat and the ride itself is an experience.

Guided luge rides
The guided luge ride is put simply as a must. It lasts about two hours with a break at the midpoint to warm up and have a cup of hot chocolate. It takes you along a groomed treeline trail throughout the mountain and overlooks the St. Lawrence River. The cost is $35.95 for children ages 10-17 and $39.50 for ages 18+. It’s fantastic and incredibly popular, and it requires a reservation so be sure to call before heading there. If you’re a guest at Hotel La Ferme you have first dibs on reservations. This comes in quite handy when the mountain is busy.

Snowmobiling
If you’re into snowmobiles like I am, the guided tour through the mountains of Charlevoix is waiting for your arrival. Located at The Fairmont Le Manoir Richelieu (about 45 minutes from the Hotel La Ferme), it provides an awesome opportunity for winter adventure. You can either go at it alone or with a guide but either way it’s a win-win situation. I recommend the guided version as it allows you to see all the best spots along the way. Rates for one person are $145 for two hours and for two people it’s an additional $16. For a guide, the price is an extra $48. There are many different pricing options so be sure to check the website (above). All prices include insurance and the gear you’ll need to keep warm. It’s fantastic.

Cross-country skiing and snowshoeing
For the crosscountry skiers and snowshoe adventurists out there. there’s a ton of opportunity for you, as well. At Sentier des Caps, you can rent both cross-country skies and snowshoes and hit the trails running through some of the most beautiful scenery around. For the cross-country folks out there you’ll have 27 km of perfectly groomed linear trails and for the those looking to do some snowshoeing, there’s roughly 40.3 km of ground to cover. Ski, shoe and pole rentals will run you $19.50 for a full day and for snowshoes, $13 per day. The cost to enter the trails is $16 per day for skiing and $8.50 for snowshoeing. There are also family packages and half-day rates available for both.

Aprés ski
The aprés ski at scene Le Massif is also great. From live music, DJs spinning, broadcast hockey, and karaoke to the list of great locally brewed beer, the pub at Le Massif draws the post-ski crowd and doesn’t come up short. It’s a perfect way to end the day before heading back to Hotel La Ferme only to have some more.

The hotel
In the center of Baie-Saint-Paul, Charlevoix, Hotel La Ferme is located on the shores of the St. Lawrence River and has 145 rooms and lofts spread across five buildings on the property. Once the location of one of the largest farms in the area, the property was purchased by Gautier with the intention of creating a hotel within the original farm structure. After a fire burned the farm to the ground, a new hotel had to be built and Gauthier did so in the footprints of the original farm, using much of the reclaimed wood that survived the fire.

Rooms
Every room at the Hotel La Ferme is full of character, personality, and charm. With seven different types of rooms to choose from and prices ranging from $89 to $379 per night (Canadian dollars), there’s something for everyone at the hotel. As the hotel puts it best, the rooms offer “cozy comfort, streamlined design, and furnishings that are trendy yet sophisticated.” As I would like to put it, “they’re awesome.”

Spa Du Verger
The Spa Du Verger is located in the hotel and is the perfect way to finish your day after hitting the slopes. Whether you choose the Swedish massage, Ebb & Tide hot shell massage or take advantage of the thermal experience, you’re sure to be relaxed and ready for what tomorrow brings. There are several great packages to choose from but to give you an idea, an hour-long Swedish massage, a 30-minute facial luminous, and a healthy snack will run you $155 and for two people to experience just the thermal experience it’s $60. This also includes two robes, two reusable water bottles, and two healthy snacks.

The best way to explain the thermal experience is as a sequence of transitions between soaking in the spa hot tub and dropping yourself in a shockingly cold body of water. Several times. It may sound crazy but you feel quite invigorated and relaxed afterward. Following your time spent back and forth between the bodies of water, you head into the spa for some time in the sauna and steam room. There’s also a crushed ice machine that you use to massage your muscles. It’s awesome.

Food and drink
The three great spots at Hotel La Ferme offer perfect ways to start your day with breakfast, have a quick bite and glass of wine by the fire after skiing, or wrap things up with a fantastic farm-to-table dinner. Restaurant Les Labours is the main dining spot at Hotel Le Ferme and also serves as the location for breakfast. Le Bercail is located on the main floor of the hotel and is a great spot for one of their fantastic pizzas from the wood-burning stove or a glass of wine/beer after hitting the slopes. Cafe Du Marché is the on-site coffee shop and home to the many art openings held at Hotel La Ferme.

If you’re like me, food is an integral part to the success of any vacation. With that being said, the food at Hotel La Farme is fantastic! Farmed, caught or raised locally, the food is fresh, colorful and plated with brilliance. Les Labours Executive Chef Sulvain Dervieux delivers a seasonal, fresh, and thoughtful menu that will leave you coming back for more. There’s a reason its reservation book has little space available, and it’s the food, ambiance, and service. Dervieux also oversees the menu for Le Bercail and all of the on-site catering as well. In additional to the 5-star menu, the restaurant has the wine list to accompany your palate.

Ice skating
Ice skating is available at the Hotel La Ferme and the location of the rink is perfectly located just steps outside the hotel. The best part is that there’s no need to bring skates. Just simply head over to the front desk, tell them your skate size and they’ll provide you with a pair of skates.

The Rossignol Experience Center
If you don’t have skis or a snowboard it’s no problem, as the Rossignol Experience Center at Le Massif has you covered. In no time the pros will have you fitted and ready for the slopes. While most resorts provide old run-down skis or boards, the REC carries top gear for all levels. I opted not to bring my gear and was fortunate enough to be outfitted with the Rossignol Super 7 Ski Series and loved every minute on them. There are many variable costs to renting gear to suit your needs but all items are posted on the Le Massif site and the staff is on point and very helpful.

The tram
The ski-in/ski-out of the Hotel La Ferme is made possible by the light tram that brings you to the base of Le Massif de Charlevoix. It takes about 30 minutes along the St. Lawrence River and drops you off at the station located at the base of the mountain. From there a gondola picks you up and takes you to the top of the mountain. It’s a great ride and the cost varies with your age group but to give you an idea, for ages 26-64 the cost is $20 roundtrip. The best part is the lockers the hotel provides for all of your gear. Located at the light tram station, the lockers have individual heaters for your gloves and boots. Every night the hotel turns them on so when it’s time to head back to the mountain they’re all warm and dry.

Home of Cirque Du Soliel, Baie-Saint-Paul is a city in the province of Quebec, Canada, and is also home to Hotel La Ferme. It’s a quaint, self-sustaining community that also provides much of the goods for the hotel, including artwork by the locals. The streets are lined with locally-owned shops.

Getting there
Getting to Le Massif de Charlevoix is in many cases easier and takes less time than the trip to most ski resorts here on the east coast, and it’s certainly easier than flying out west. I flew from New York and the flight time was roughly an hour and fifty minutes to Quebec City. From the airport, the drive takes just under an hour and is one straight road that leads you to both Le Massif de Charlevoix and Hotel La Ferme. Kudos to the above picture from Air Canada for helping me on my way. 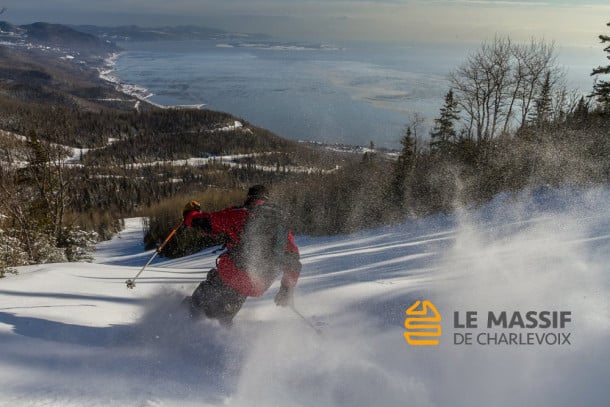 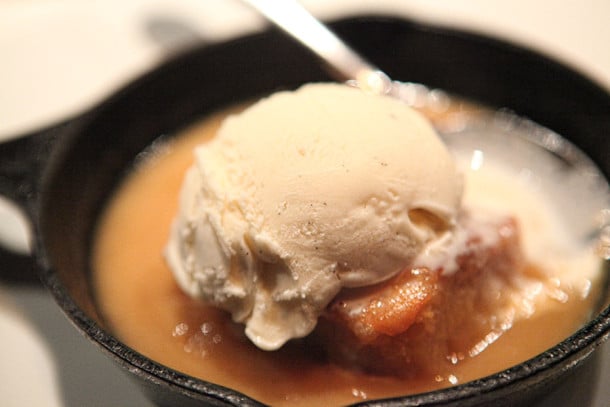 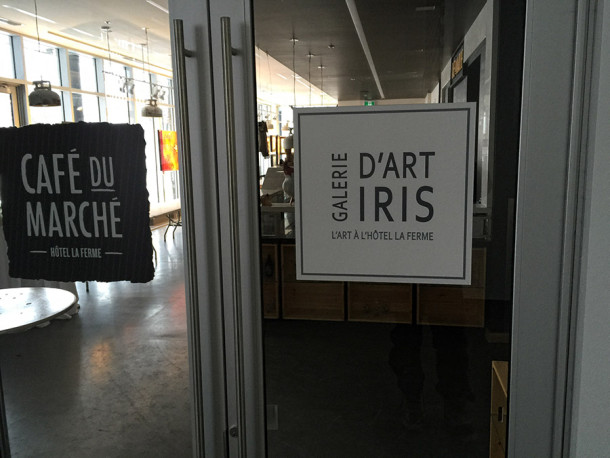 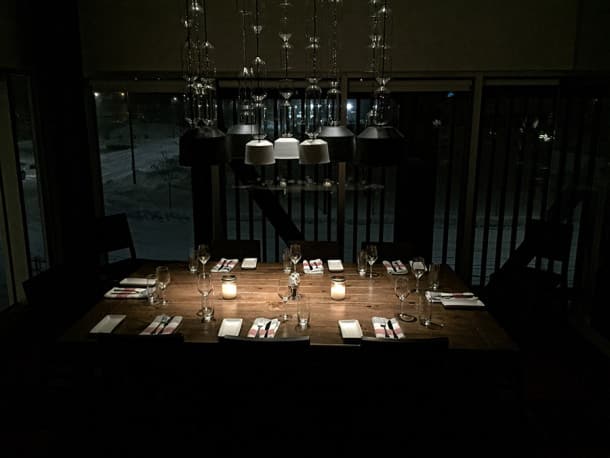 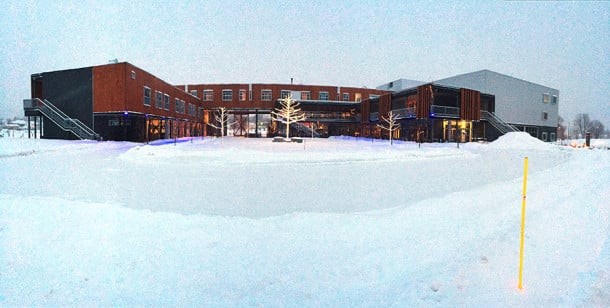 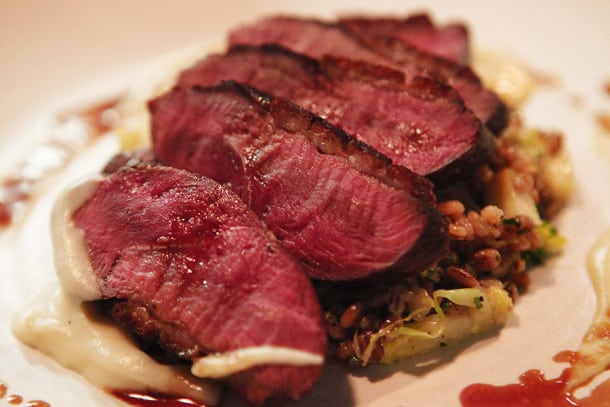 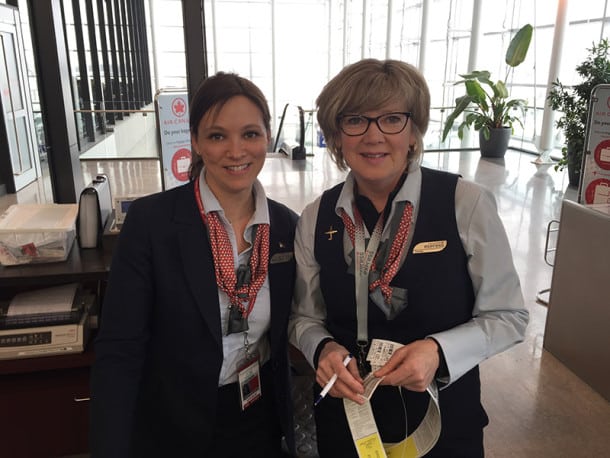 The amazing team from Air Canada 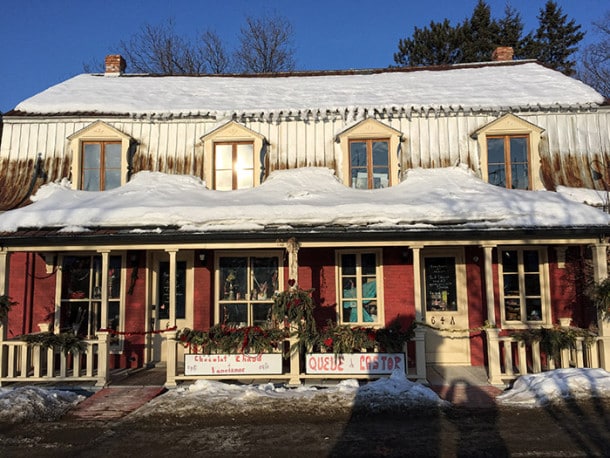 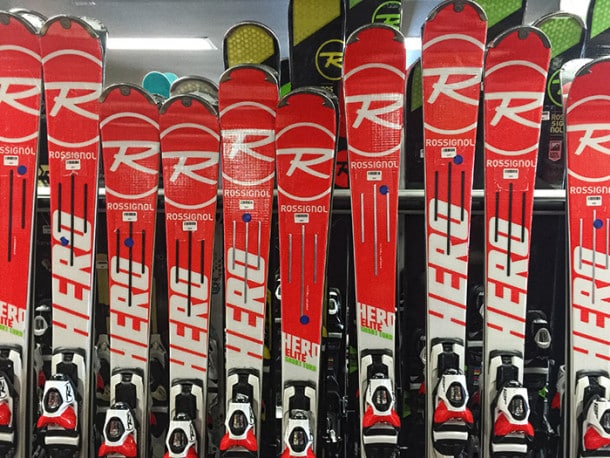 Rentals at the Rossignol Experience Center 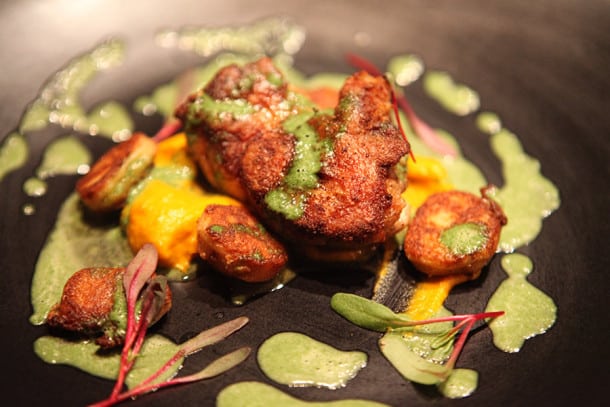 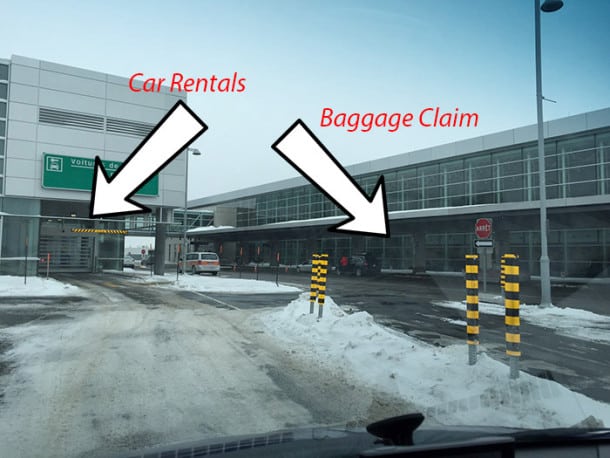 Renting a car at the airport 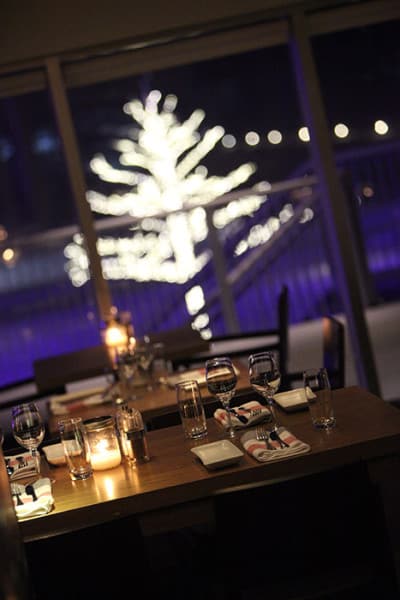 Eating at the hotel

The light tram from Hotel La Ferme to Le Massif 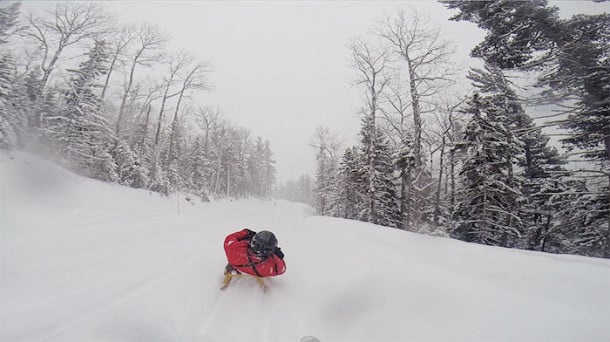 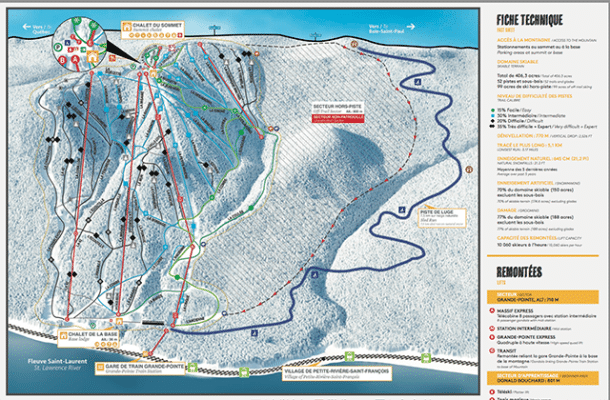 Guided skiing in the backcountry 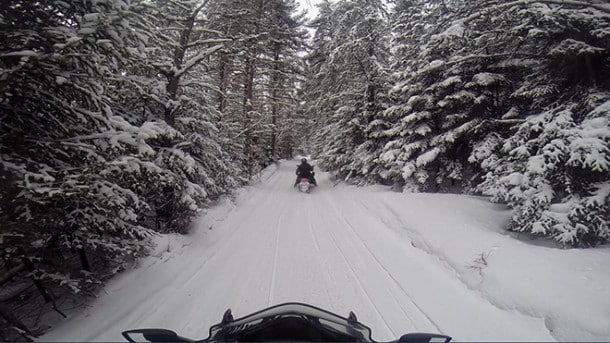