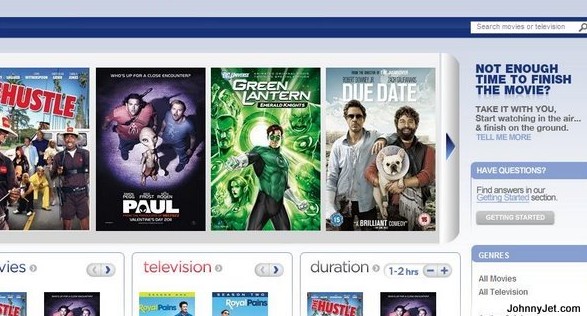 Greetings! I finally christened my new passport, and Canada took the prize as being the first stamp. I hope it fills up with some sexier destinations, but for now, Canada will do. This week summer has officially come to an end in the Northern Hemisphere (boo!), and I already experienced the fall chill in New York, Connecticut, and now Toronto. For those following me on Facebook and/or Twitter, then you know on Friday I flew from L.A. to JFK on American to test out their new entertainment-on-demand product. It’s cool because you can rent TV shows and movies for pretty cheap. I have all the details and also included my top five New York City tips. Check it out!

BACKSTORY
When American Airlines asked if I wanted to check out their new entertainment-on-demand product, I wasn’t going to say no. First of all, I was planning on going back East to visit my dad (I visit him at least once a month), and there’s nothing like a free ticket. Second, I’m a big fan of technology and ways that will create a better passenger experience and make the flights go by quicker (at least mentally).

I was booked on American Airlines flight 2. It departs Los Angeles (LAX) at 9:25 a.m. and is scheduled to arrive in New York’s JFK at 5:59 p.m. I set my alarm for 7:30 a.m. (I live close to LAX), and when I woke up I discovered I had an email from American (I signed up for their alerts) that my flight was running an hour and 10 minutes late. I was happy because that meant I got to stay in bed longer instead of pacing around the gate area. NOTE: American also left voicemails for all customers, but those came in much later than the email/text. My seatmate who didn’t register for email alerts said she was already on the way to the airport when she received her voicemail. TIP: Sign up for flight alerts–they are free and can save you lots of aggravation. Here’s American’s link

RANDOM OBSERVATION: On the way to LAX I asked my taxi driver (as I always do) if he thought the economy was picking up. “Slowly but surely,” he said, which I find has been the overall consensus as of late. Let’s hope it’s true.

This was my first time flying American out of LAX in a few months so I got to experience their new setup for security. I gotta tell you, it was a pleasant experience. Especially for the priority security line, since it took me just four minutes to clear. When I asked the TSA agent if it was always like this he said, “No, but it is 75 percent quicker than the old setup.”

We ended up taking off at 11:14 a.m., and shortly after the pilot got on the horn and said arrival time was showing 7:25 p.m., but I had already logged on to Gogo’s inflight Internet and the first site I checked (as always) was the airline’s website to find out our arrival time. AA.com was showing 7:21 p.m. and Gogo’s Flight Tracker stated 7:11 p.m. I thought that was weird, so I decided to test all the sites that I know about and this is what I found: Flight Explorer 7:01 p.m., Flight Stats 7:21 p.m., and Flight Caster 7:21 p.m. My unofficial winner is Flight Explorer, because I got talking to the flight attendants toward the end of the flight and asked if they could get an updated time of when we were going to land. They came back and said the pilot said he was flying at the highest possible altitude and he put the pedal to the metal so we were getting in early at 6:55 p.m. But AA.com was still showing 7:21 while Flight Tracker had 6:55 p.m. Moral of the story: When I go to pick up friends at the airport I will use Flight Tracker to determine the actual time.

RANDOM AIRLINE TERM: While chatting up the flight attendants I learned the term “plucker.” I’m not sure if it’s just American or all airlines, but when American has a lot of flight attendants working a flight like the LAX-JFK route (there were nine FAs) they have one help the gate agents with boarding. I guess she got “plucked” from the plane to work the gate.

A couple months ago I attended the Gogo press conference at their headquarters in Chicago where they announced their new streaming video service. I thought it was cool and was excited to test it out. This is what I found on my American flight:

For starters, most of the American flight attendants didn’t even know the service was available, and when I told them they were excited because they said whatever keeps passengers busy is better for everyone. Amen, sisters. Customers don’t need to pay Gogo’s Internet fee to use the streaming video service. (By the way, on this route I noticed Gogo raised their Internet access prices a couple dollars to $14.95. That’s a little steep in my opinion, and that’s probably why I didn’t see many passengers in coach using it on the five-hour flight.) FYI: If you buy online before your trip I see they still offer it for $12.95.

Right after we took off, American played a short video on the overhead screens about the Gogo Internet service but it didn’t mention anything about streaming video. The only way passengers would know about it is by reading the pamphlet in the backseat compartment that mixed in with the safety card, food menu, barf bag, and Sky Mall and American Way magazines. Another way passengers would learn about it is if they logged on to the Internet and surfed around some of Gogo’s free offerings (they don’t charge the $14.95 for several websites, including AA.com). But if I were Gogo, I would update the video advertisement and educate the flight attendants to help spread the good word.

After reading the pamphlet I learned that the service is currently not available for iPads, iPhones, or any other smart devices, just laptop computers. And when I first logged on I was using a Safari browser and received an error message stating: We’re sorry for the inconvenience, but we have not yet created a version of Gogo Inflight Entertainment for your current configuration, but we will support them in the future.

Please use one of the supported operating systems (OS)/32-bit browser combinations in order to continue (NOTE: 64-bit browsers are currently not supported):

After I logged in using Internet Explorer it worked, but after I plopped down the money with my credit card it stated that I needed to download a viewing widget. Luckily, it took only a minute or so to do it and according to my Norton Protection Software the widget was safe. BTW: American is charging 99 cents per TV show and $3.99 per movie. All you need to do is create an account or log in (if you already have a Gogo account), enter the form of payment, and click “rent.” All major credit and debit cards are accepted. According to American’s press release, with the purchase of a TV show or movie through Oct. 15, customers will also receive credit for a free Internet session to use on a future flight. I got the credit via email four days later so that’s a great deal even if you don’t want to watch a TV show.

Also according to American’s press release, “The inflight library features more than 100 movies and TV shows from major Hollywood studios”. But on my flight there were only 20 TV shows (10 episodes of 30 Rock and 10 episodes of Royal Pains) and 21 movie choices: Arthur, Due Date, Ghost from the Machine, Green Lantern, Emerald Knights, Harry Potter & the Deathly Hallows Part 1, Hot Fuzz, Jane Eyre, Nanny McPhee, Paul, Red Riding Hood, Sanctum, Serenity, Something Borrowed, Sucker Punch, The Adjustment Bureau, The Eagle, The Hustle, The Interpreter, The Kingdom, Unknown, and White Irish Drinkers.

I rented the first episode of 30 Rock since I had never seen it (it’s really well done and funny), and after a couple seconds of playing it paused. I thought for sure the service was going to be like trying to watch a YouTube video on a slow connection, but after I pressed pause and waited for a few seconds the video worked like a charm and it didn’t time out the rest of the way. You can view the video in a small screen or full. What’s also nice is that “movies and TV shows will remain accessible for viewing after the customer has landed–movies for 24 hours and TV shows for 72 hours. Unexpired rentals will be available for playback on the ground by using the same device and browser used onboard.”

Currently this entertainment-on-demand product is the test phase and only available onboard AA flights operated with Boeing 767-200 aircraft, primarily transcontinental flights between New York (JFK) and Los Angeles and between JFK and San Francisco. However, American Airlines is expanding it to approximately 400 Wi-Fi-enabled aircraft by the end of 2012. In addition, the streaming video product will be installed on more than 90 Super-80 aircraft before the end of 2011.

In summary, I found the service to be a great option for travelers who don’t want to be prisoners to the airline’s ancient overhead movies, and I think the price is right. The only thing it needs is more movie and TV choices which are to come. For more information, visit aa.com. 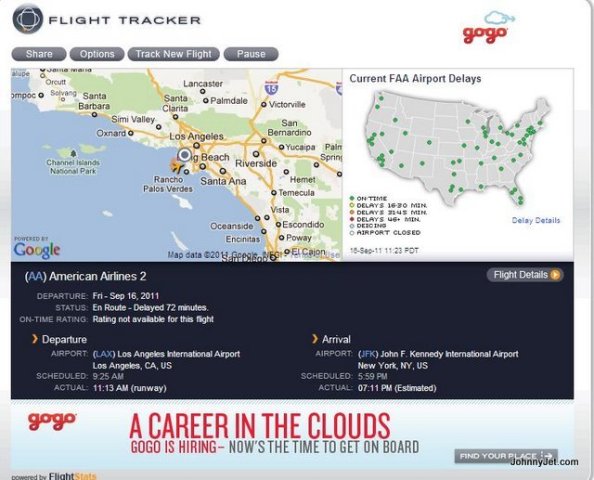 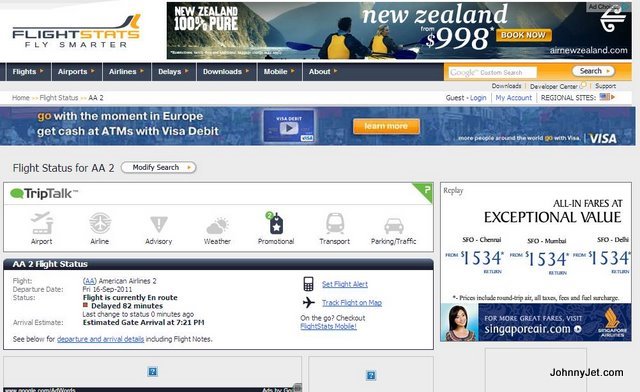 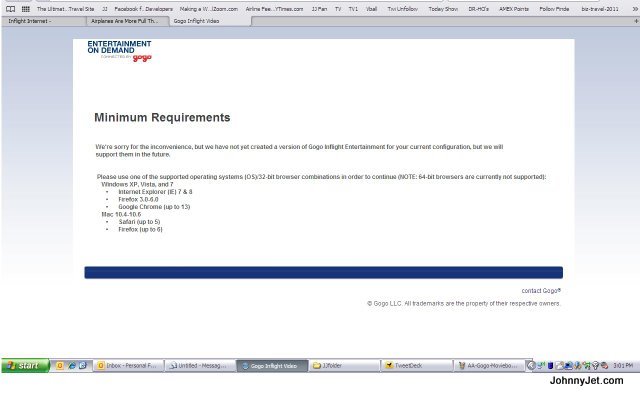 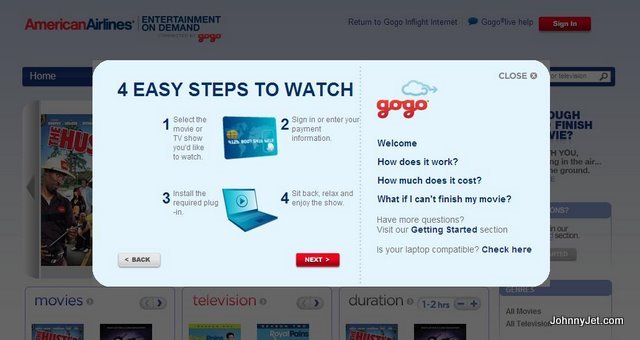 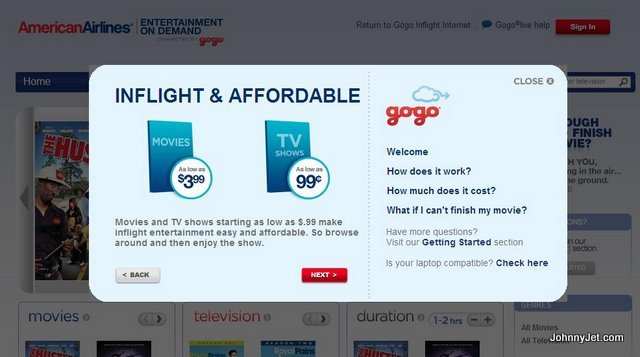 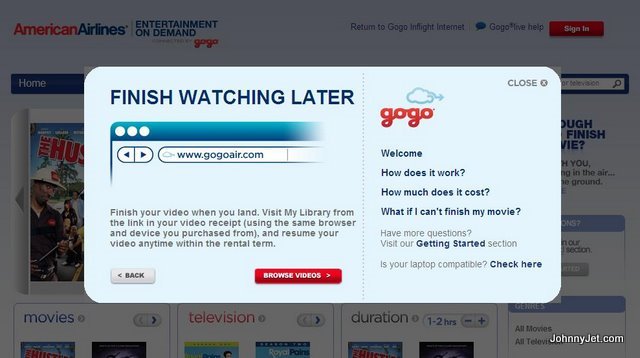 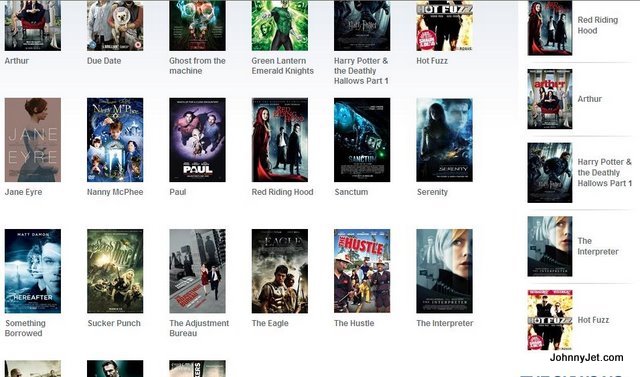 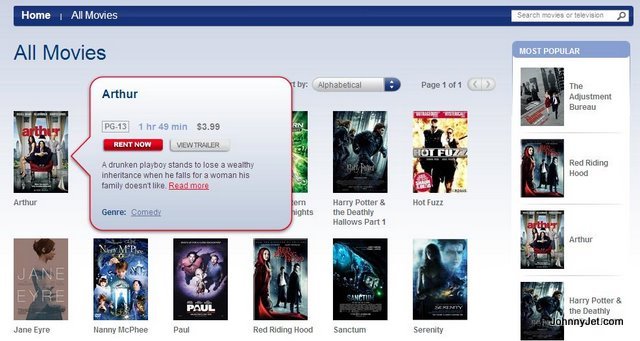 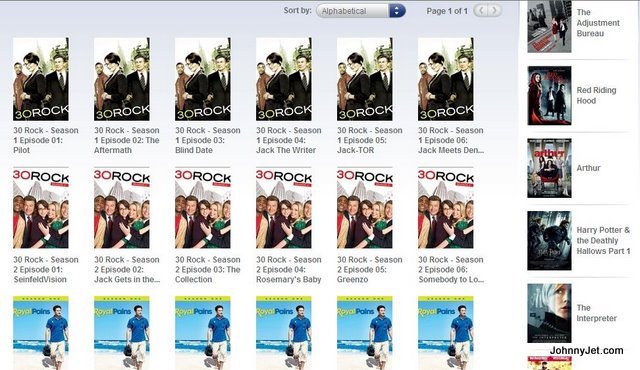 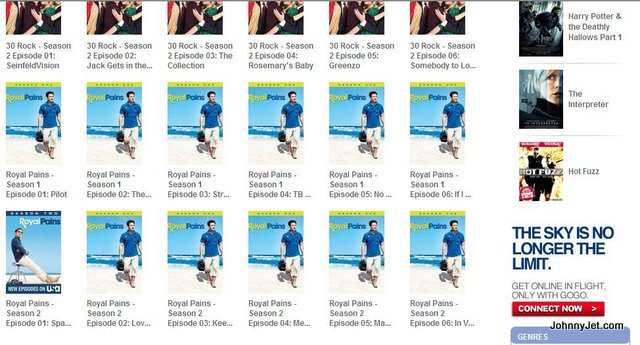 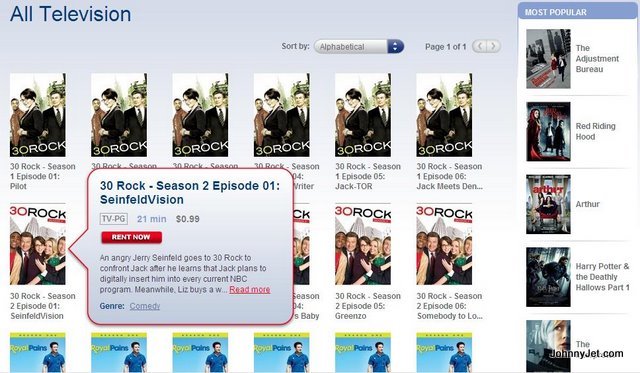 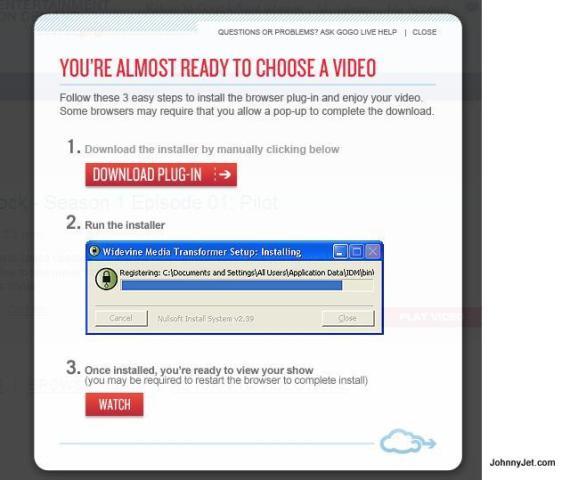 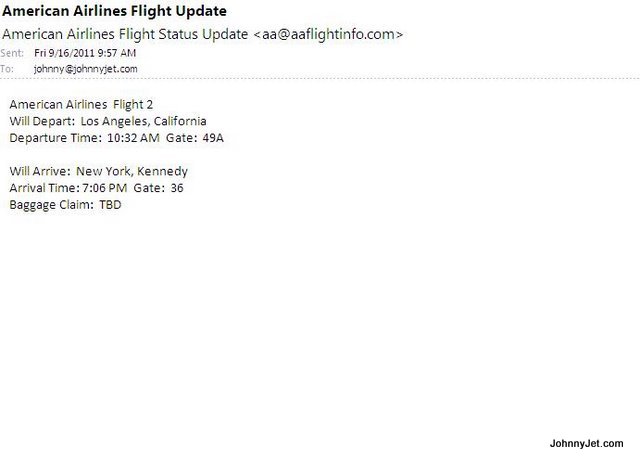 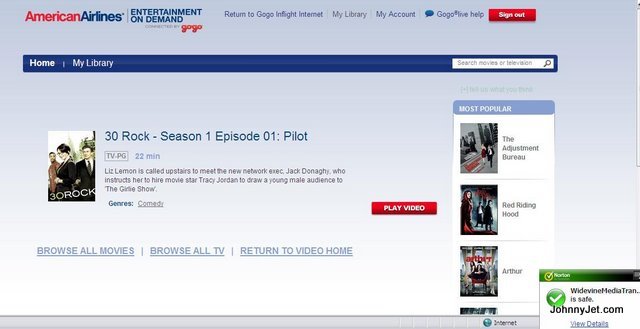 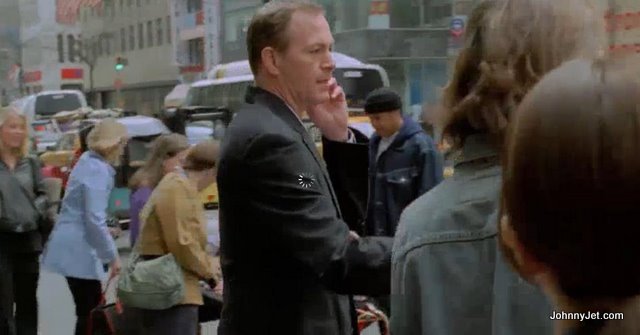 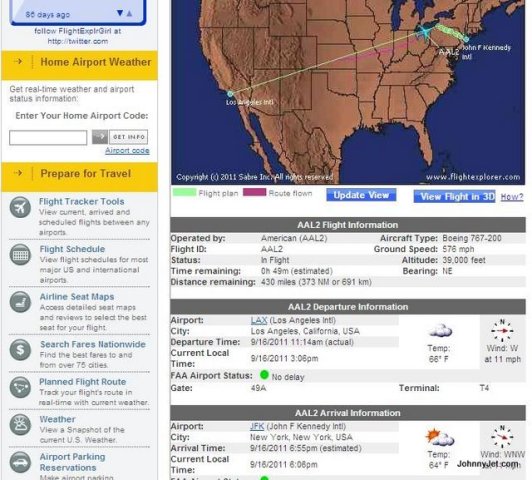 Note: This trip was sponsored in part by American Airlines.