During the pandemic, we saw some of the most outrageous behavior at U.S. airports and on airplanes. Most of it seemed to happen at either Miami International Airport (MIA) or on flights to or from Miami. Do you remember the video of the Rocky-style fight that happened at an American Airlines check-in counter? 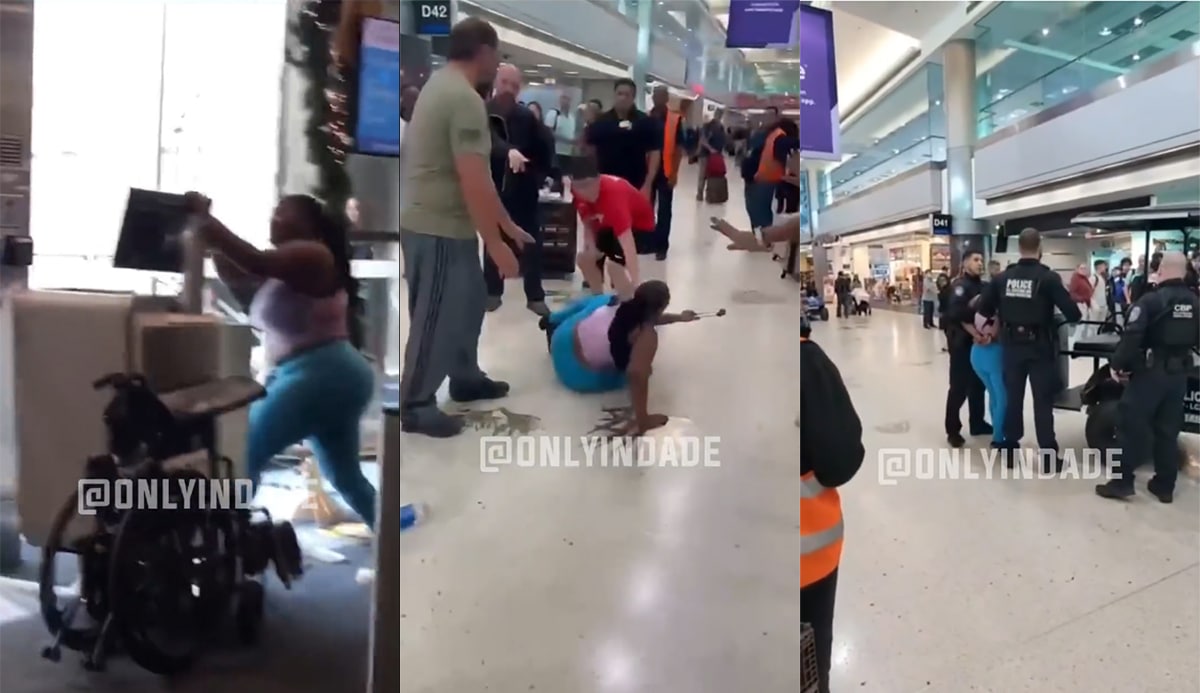 Or when passengers were brawling with a police officer and it almost led to a riot and not because he pulled his gun out. Watch that video here.

Or when this irate man threatened gate agents, punched a passenger and kicked a defenseless ‘Wet Floor’ sign.

I thought all of those situations were bad. But what took place recently at MIA’s Gate D39 made all of those incidents combined look like child’s play. Seriously. This traveler, an Alabama resident who was heading to New York City, absolutely flipped her lid. In fact, I nominate her as the most disgruntled airline passenger of all time. And that’s saying something.

Multiple videos were posted (embedded below) by various witnesses so we have different angles, and you’ll see what I’m talking about. She rips multiple screens, printers and monitors off of the gate agents’ desks and even throws the monitor at the agent and hits her. It amazes me it took so long for security to arrive. This is not the first time I’ve asked: Where the hell is Miami Airport security?

I couldn’t make out what the irate passenger was saying but, according to Gary Leff, “She appears to be screaming that someone should find her children. It seems she was traveling with kids and lost track of them.” I feel bad for her kids because what took place was complete chaos. Not to mention, how does what she’s doing actually help to locate her missing kids?

RELATED: Wild Video: The Craziest Thing You’ve Ever Seen on a California Freeway … And That’s Saying Something

According to WSVN (local Miami news), Camilia McMillie, 25, “took her frustrations out on a gate agent when she couldn’t find her two children after they had walked off to use the bathroom.” They also reported, “The employee is said to be OK and has some bruising on her right shoulder area. Police also told 7News that the outburst left around $10,000 worth of damage to American Airlines’ property in its wake. McMillie was booked into jail later that night on an aggravated battery charge, among others. She appeared in court on Wednesday morning.” She is being held on $4,500 bond.

Unfortunately, I witnessed an incident firsthand in MIA a year and a half ago, when I escorted my dad to California so he could hug his grandkids for the first time in over a year. I wrote: “Miami Airport has some real interesting characters, especially three young women in their early twenties who everyone could hear almost got in a fight near Café Versailles. Then they came strolling through our gate area screaming profanities with their masks off and two little kids (around four) following close behind. I couldn’t keep my mouth shut so I yelled at them to watch their language around little kids. That’s when a woman said, “Those are my kids!” So I said, “What a great role model you are.” She then started calling me a white man and some obscenities but kept walking. When they reached the end of the E Gates, they made their way back, still screaming at the world and at me and anyone who looked at them. Not one MIA or AA employee said a word. It was like they’re used to it.”

I know the pandemic has left many people stressed and on edge but come on, people. Get your act together. Now that the mask mandate is over and the virus is getting under control, we have to do better.

One commenter, @josie_halles is more understanding, tweeting: Airport meltdown scenes are often in Miami. As someone who had to fly in and out of MIA frequently, I can understand where’s she’s coming from. Worst airport in the US.

Airport meltdown scenes are often in Miami. As someone who had to fly in and out of MIA frequently, I can understand where’s she’s coming from. Worst airport in the US.

That may be the case but worst airport in the world or not, nothing, in my opinion, excuses this kind of behavior.