An Aruban Hotel to Treasure

There’s an outcrop of the Netherlands, about 70 square miles, from which you can see South America if you stand in the right spot. Contrary to geographic intuition, fewer than 20 miles stand between the two—between Dutch sovereignty and a particularly peninsular slab of northern Venezuela—a distance close enough that in the planning stages of my visit it was seriously suggested that I kiteboard between the two.

Aruba—it of the world-class kiteboarding—is this 70-square-mile, Venezuela-neighboring Dutch outcrop. Nearly 5000 miles and eleven flying hours from Amsterdam, Aruba remains a constitutionally subordinate territory of the Kingdom of the Netherlands that hangs out leisurely in the Caribbean Sea. It’s like a Caribbean guest house for the entire Dutch population and whichever international friends know to ask for the keys.

Granted the keys to explore with my pal Brooks, I found the Dutch Oranje to be flattering against the island’s lapping, turquoise waters and white sand beaches, which is of note in a region clamoring for distinctions beyond those in room quantity. Dutch-driven standards, for example, demand a quality in hospitality, food and safety not available on neighboring Caribbean islands, and the Aruban lingua franca, papiamento (which it shares with Bonaire and Curaçao), is a blend of Dutch, Portuguese, West African languages, and Spanish.

The island’s geology, free of any Dutch connection, was similarly exceptional. Aruba is arid, bald and raw—true to its age, I was reminded by a visiting professor I met there—unlike other, greener islands like Cuba and Hispaniola. The topography wears the scars of its violent formation, of land newer to the Earth’s surface, and a mighty wind (though it is outside the hurricane belt) and negligible rainfall (our three days notwithstanding) help keep the vegetation thin. It’s sculpted sand dunes and unusual rock formations surrounded by powdery, Caribbean beaches.

Very memorably, the “One Happy Island” has a character all its Caribbean own, and a populace eager to engage first-timers—but no one element defined Aruba quite like Boardwalk Small Hotel Aruba did.

Down a very missable driveway to the right off Aruban artery L.G. Smith Boulevard are 14 private casitas, the entirety of the Boardwalk occupancy. Each one features unique interior design, a fully-equipped kitchen, a common area, and a furnished patio with a charcoal BBQ and hammock. From the outside the casitas, all recently renovated, are wound up and around each other, draped by palms, so that the entire place seems to huddle together around the heated pool at its heart.

The intimacy is structurally sound, but only to complement what is achieved by the hotel’s personnel, a team led by proprietors Kimberly and Stephanie Rooijakkers.

To the visiting eye, the Aruban-born twins appeared to be Dutch-speaking Belgian expats. The real story has them leaving Aruba at age six for Belgium, where they resided until a return visit to Aruba in their formative years inspired them to plant their livelihoods in their vision of Aruban hospitality. Manifested in the house-made iced tea waiting in our fridge the night we arrived, and the papaya-based “pika” hot sauce we were gifted, and the proprietors’ own engaging presence hour-to-hour, that vision is something to be celebrated.

Rarely in my travels has a hotel felt so much like home, so immediately. By day, Kimberly and Stephanie lent their time and sensibilities like lifelong friends, once over smoothies. Returning at night, by giant rental truck, granted us a homely satisfaction regardless of the hour. Mornings were spent leisurely on the patio with the option of a delivered breakfast (here are the options; the Go Local, for $13, was nice). We never got to use the BBQ, but the thought to provide us with charcoal, local seasoning and a few local recipes went appreciated every time we passed our haul entering or exiting the kitchen.

Tip: Our rental truck was provided by Amigo Car Rental, just a few minutes from Boardwalk.

Tip: The Super Food supermarket closed at 8 pm on paper, but in our one experience arriving at 7:50 pm was far too late. A full team of guys blockaded the revolving door to the supermarket to keep hopefuls like us from getting in. Leave yourself plenty of time before close.

A search for prices (using April 13-14, 2015 as a sample date) returned a difference of only ~$16 a night between Boardwalk (starting at $265 a night) and the beachside Marriott across the road (representing chain hotels; starting at $249 a night). Wrapped in that price, the Boardwalk package is worthy of most any Caribbean ambitions.

Aruban treasures
All stays at Boardwalk Small Hotel Aruba come with what’s called an Aruba Treasure Box, a Boardwalk original. The box—a literal wooden box—will be waiting in your casita upon your arrival stuffed with a selection of Boardwalk-approved local activities, dining options and more. Culled from preferences you’ll have indicated online, it’s just another arm of the effort to inform and see through the best possible Aruban guest experience as more than just idle hosts.

Here’s a quick list of some of the treasures we found in Aruba—some facilitated by Boardwalk and some not:

1. Jolly Pirates (Boardwalk)
Just a good time. You’re on a reimagined pirate ship parading between three of the best snorkel spots in Aruba, one of which features a sunken WWII ship (Antilla). The bar is open and included for the duration of the sail (though the alcohol is watered down), and the “the bartender is the most important man on the ship” jokes are flying. It’s that kind of environment, hilariously and openly transparent with its tourism-reactive intentions. It also ends with a half-hour or so on the ship’s rope swing, by which a guy in our group lusting for a backflip was shown no mercy.

2. Massage (Boardwalk)
Brooks, I hope you enjoyed this. I had to work during our scheduled massage time with Boardwalk’s on-site legend, a possibly French guy named Flo, so Brooks took the full hour. He decided after that it had been the best massage he’d ever received. Through Boardwalk, Flo will come to your casita or take care of you in the garden.

3. SUP Yoga (Boardwalk)
Boardwalk’s list of yoga partners/options is fairly comprehensive, but I can only speak to the experience that awaits with SUP—stand-up paddleboard—yoga. I’d only done yoga once before this trip and it was on solid earth, so an hour on the board was exhausting—but the right kind of exhausting. Rocking about 50 feet offshore, tethered to a line so we didn’t float away, we took instruction from a yoga celebrity (and great person) while trying not to tumble out of enlightenment into the water. Tough, but very cool.

4. Rock climbing and dune walking in the north
No structure here. We hopped in our truck and headed north on L.G. Smith Boulevard a few miles to the top of the island, where we parked (by California Lighthouse) and followed wild dunes and dry brush to the water. The rocks at the water’s edge bloomed high into some unusual formations, good for climbing, and we met a couple that may well have met in the first internet chat room.

5. Rum shops
Not unique to Aruba (more Caribbean), but worth checking out if you can find one. Rum shops are open-air bars born of a time when lower- and middle-class workers wanted a place to socialize after their shifts. Bodegas would sell cheap bottles of rum to these workers, who would then hang out drinking it, still in their clothes from the day. Mostly according to an older guy I talked to at a rum shop, the rum shop tradition eventually evolved into a number of all-inclusive, bar-style, open-air drinking establishments—and that number is shrinking quickly. In fact, we went to the closing of one by Boardwalk, which was wild.

6. Red Sails Catamaran Sunset Sail (Boardwalk)
This felt a little like the evening, dressed-up version of the Jolly Pirates cruise. It was tamer, and groups (mostly couples) were more buttoned up, but the bar here also served unending, diluted (less so) cocktails for the full 5:30 pm – 7:30 pm Sunset Sail ($49). The route takes you down and back up the coast, along which the evening breezes and sunsets are unreal.

7. JETLEV (Boardwalk)
Somehow the second time I’ve done this, but just as bananas. Check out the video above that Brooks shot using Hyperlapse.

Tip: As a Red Sails experience, JETLEV water jetpack takes place at the Red Sails pier, which is a 15-minute walk from the beach closest to Boardwalk (outside the Marriott). Make sure to account for the time it takes to walk there.

Aruba: at once an alternative Caribbean option and as safe a holiday choice as there is in today’s congested and dynamic travel market. More information on Aruba is available here. 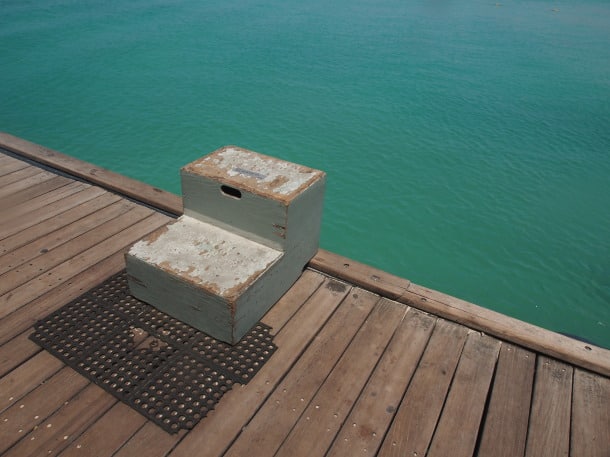 Aruba and the Caribbean Sea 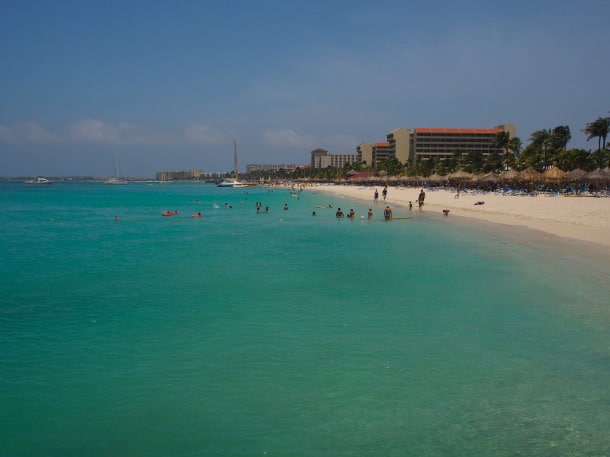 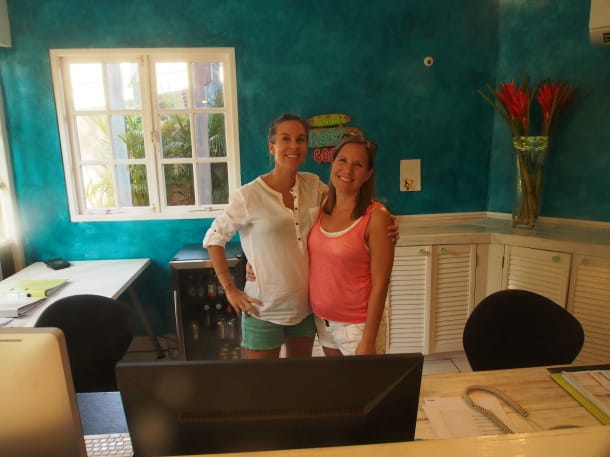 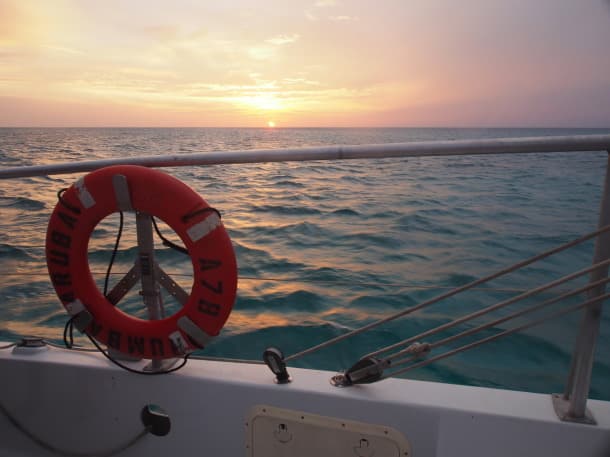 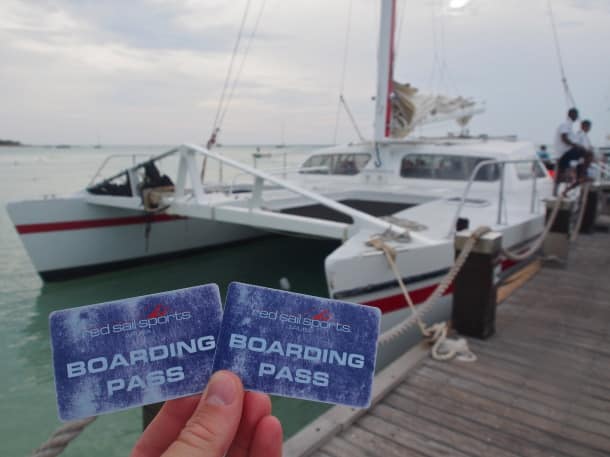 Preparing to board the Sunset Sail 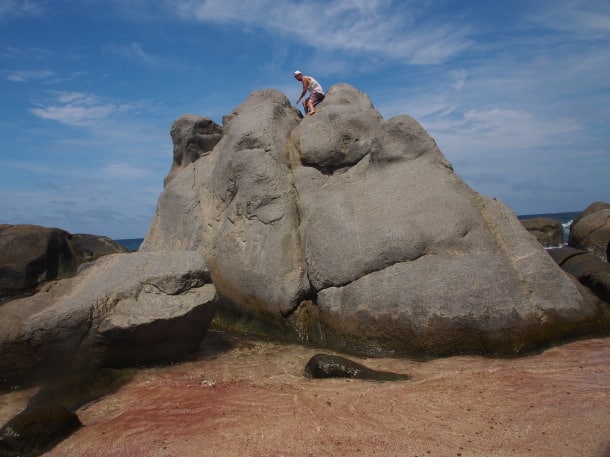 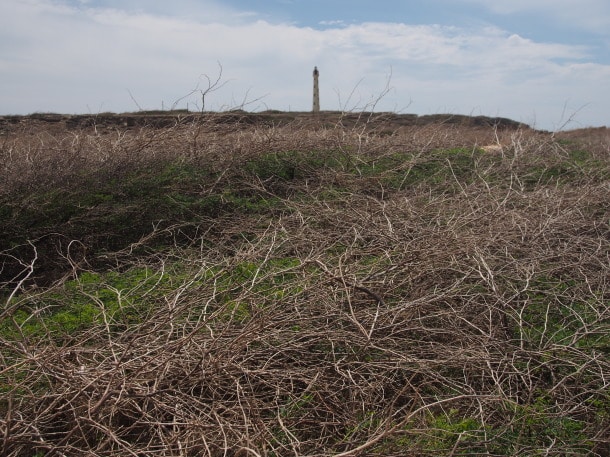 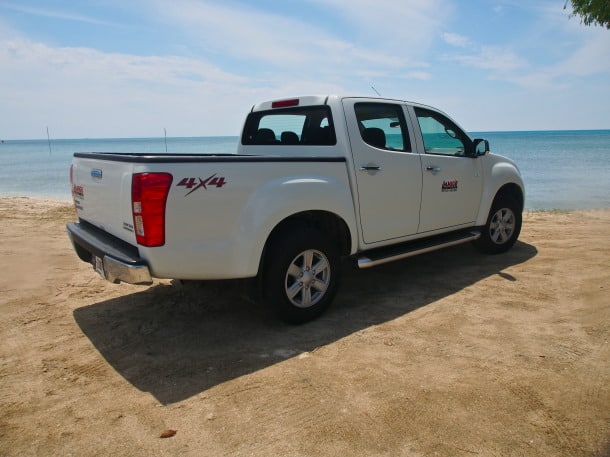 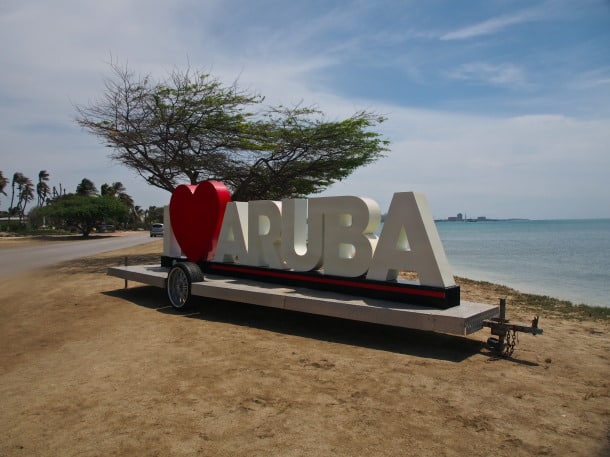 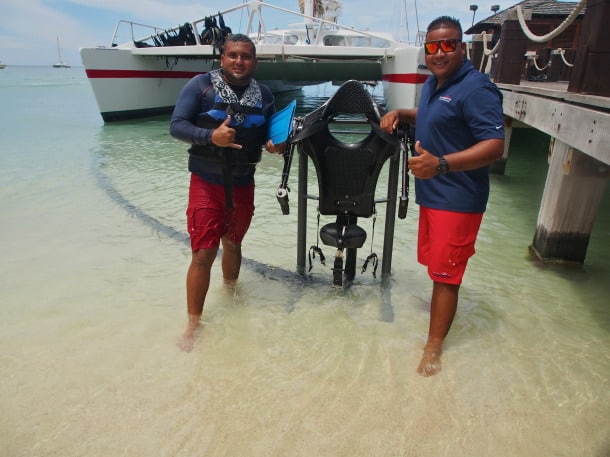 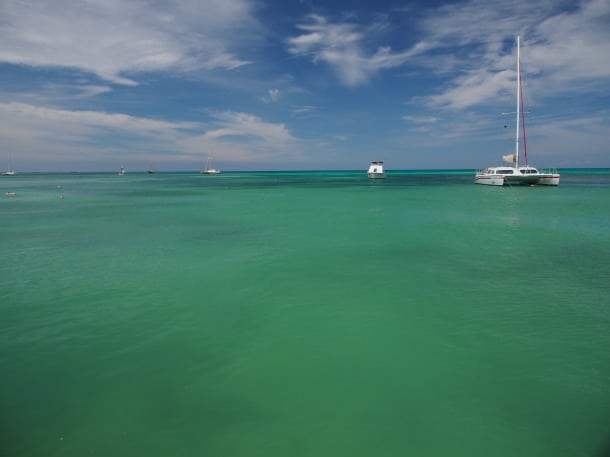 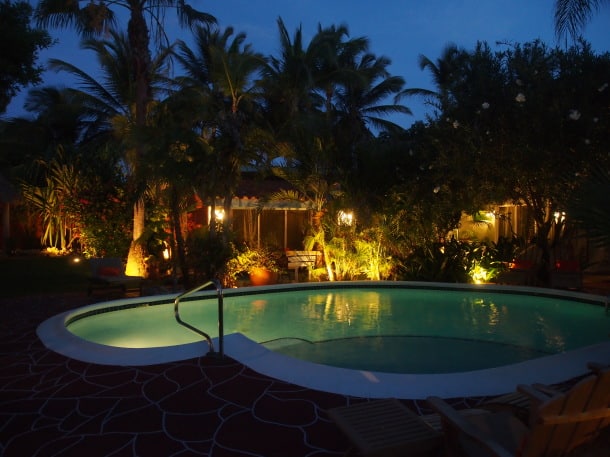 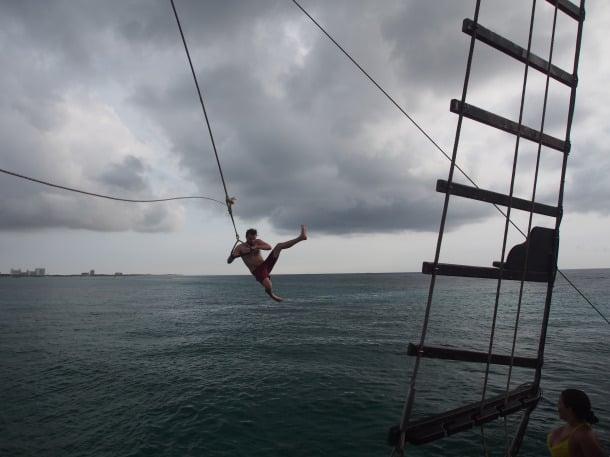 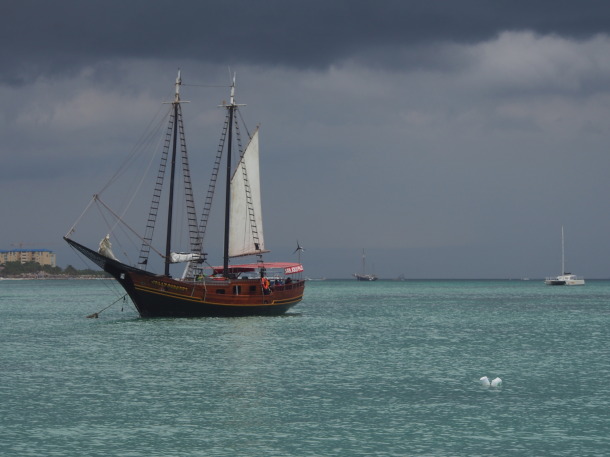 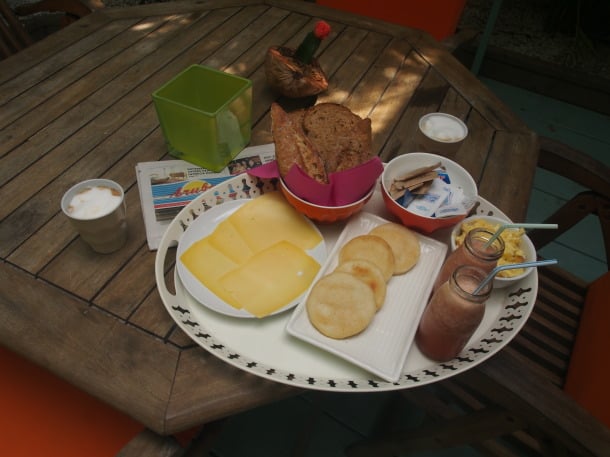 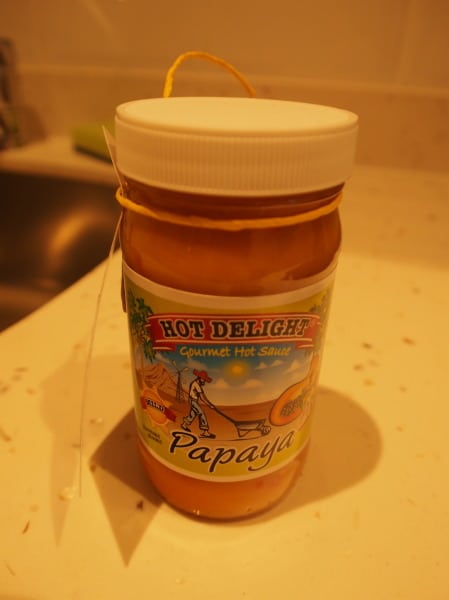 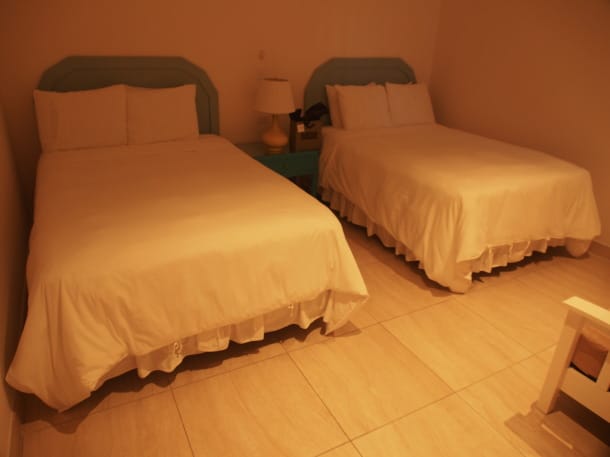 Bedroom in our casita at Boardwalk Small Hotel Aruba 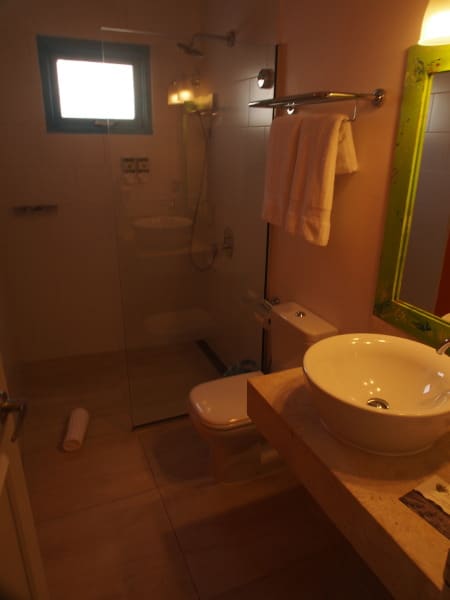 Bathroom in our casita at Boardwalk Small Hotel Aruba 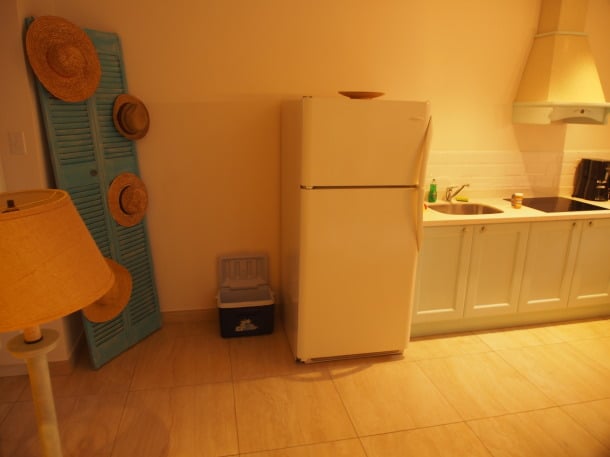 Kitchen in our casita at Boardwalk Small Hotel Aruba 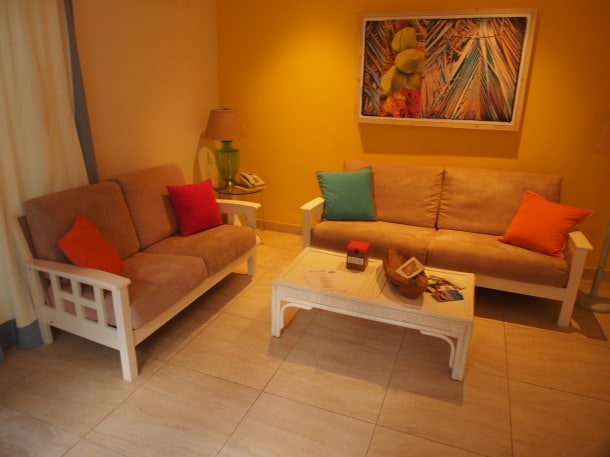 0 Comments On "An Aruban Hotel to Treasure"