Ask a Pilot with Spencer: What’s Up with Cockpit Windows?

From a young age, Spencer has been fascinated by aviation. And as his aviation career took off, that passion has turned into a love for all things travel. Adventurous and always taking the road less traveled, he seeks travel that changes his perception of the world. Highlights from his journey include visiting Chernobyl in the Ukraine, skydiving in Switzerland, and SCUBA diving in Colombia. Spencer is currently a pilot for a major airline and resides in Redondo Beach, CA.

In our Ask a Pilot series, pilot Spencer Marker answers one of your aviation-related questions each week (picking up this week after a short baby-related break). See past installments here and submit your own to [email protected]hnnyjet.com.

Hey Spencer, why do some airplanes have so many cockpit windows? Does it get distracting?

Hey, Pete. That’s a great question and, truthfully, one that I thought about as I was growing up. Especially since some airplanes seem to have a hundred windows on the flight deck, and some have as few as four. Some small airplanes only have one (just like a car)! In the end, the number of windows in the cockpit is dictated by two things: pressurization and the age of the airplane. I’ll explain.

Pressurization
Each time an airplane takes off and lands, its cabin is pressurized to allow the aircraft to fly where it’s most efficient—high altitude—while also maintaining an atmosphere in which its occupants can continue to breathe normally.

This is accomplished by bleeding pressurized air from the engine (before it’s mixed with fuel and ignited, obviously), conditioning it to a comfortable temperature, and pumping it into the cabin of the airplane. In turn, the body, or fuselage, of the airplane is sealed, creating a pressure vessel. By pumping air into a sealed vessel, the atmospheric pressure is increased. This allows jets to fly at high altitude while maintaining a breathable environment for passengers. Pressure is regulated by allowing some air to escape in a controlled manner out of the back of the airplane. These valves ensure the structural integrity of the airplane, while keeping everything comfortable for our guests.

Sounds pretty simple, right? I mean, it’s the same principle we use every time we inflate a balloon. But unlike simple pressure vessels like balloons or propane tanks, airplanes require windows, doors, access panels, and countless systems to make them work. So how do you make a fuselage that holds pressure while still being functional?

With doors, there are a couple options. First, you can make them bigger than the hole they’re filling. This is called a plug door. On these type of doors, the pressure of the airplane actually presses the door into the frame, ensuring a seal. Airplanes like the 737 and MD-80 series employ these type of doors. Or you can equip them with extremely strong latches with additional backups. Airbus A320 and Boeing 747 cargo doors are configured this way. Both work well.

Windows proved to be slightly more challenging for engineers. Before the advent of modern, pressurized airplanes, passengers had grown accustomed to the spectacular views out the windows as they soared through the sky in unpressurized transports. When adding windows to a pressurized airplane, engineers had to cut holes in the aluminum skin—which was also acting as a pressure vessel—to accommodate them. Even then, they weren’t fully aware of what stresses a pressurized jet airplane would encounter in flight.

This would be the downfall of the first purpose-built jet transport: the deHavilland Comet. The Comet employed square windows, as had been used in previous unpressurized transport aircraft. The problem occurred when the fuselage was under pressure; the corner of the Comet’s square windows endured extra stress. This led to fatigue cracks in the aircraft’s aluminum skin. Eventually, these cracks resulted in the catastrophic failure of the airplane’s fuselage as it flew. Taking lessons from the Comet, designers around the world swapped square windows with circular or oval-shaped windows. This way, there would be no weak areas where cracks could form.

Designers also knew that for the pilots to see properly (which is important), they would need tons of windows. They also knew these windows needed to be structurally strong to endure not only the demands of regular cabin pressurization, but also potential bird-strike hazards. The windows themselves are double-pained, roughly two-inches thick, thermally heated, and very heavy.

Modern airplanes
Over the years, the need for complex cockpit window arrangements has declined. This is due in part to advances in construction materials and the rigidity of advanced cockpit windscreens. Today, the Boeing 787 employs just four windows. The Airbus A220 (formerly the C-Series) does the same.

A spectacular example
There are some fairly spectacular cockpit window examples. My personal favorite is the Ilyushin IL-62 (seen below). This airplane was developed in the Soviet Union as its first long-range jet transport. 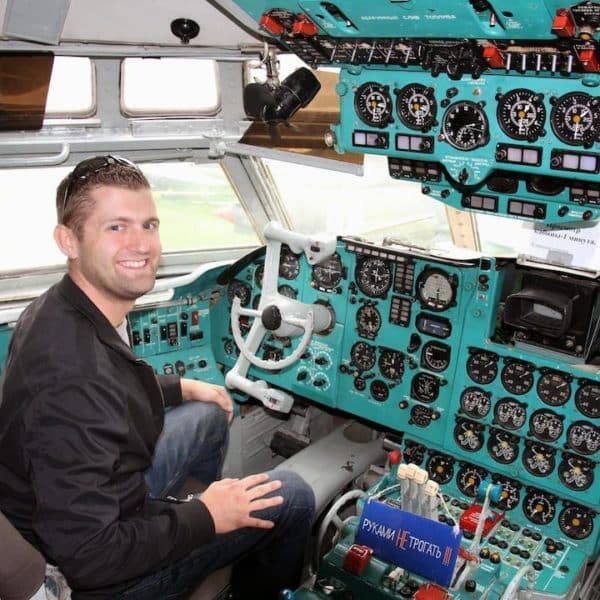 The arrangement of the engines on this airplane is unusual in that all four are mounted on the fuselage, like on a MD-80 or CRJ. However, what’s unique is that the cockpit windscreen is composed of no less than 18 individual panes. I’m certain there are other unusual cockpits out there, but this is my favorite.

To sum up
Thanks again for the awesome question, Pete. I like to say everything in aviation is done for a good reason, and this is just another example of that. The pilot’s ability to see is critical in ensuring a safe flight, but also important is the ability of the airplane to pressurize normally. This way our guests stay comfortable and happy. So in a form-follows-function scenario, you get the cockpit window layout you see today. And no, the structure around the windows isn’t distracting. After a while, you hardly notice it!

Thanks again for the question. Do you have a favorite airplane with a unique cockpit window arrangement? If so, let me know in the comments below! And remember, if anyone has a burning aviation question or something you would like cleared up, drop us a line at [email protected] to get your question featured in an upcoming Ask a Pilot column.

In our Ask a Pilot series, pilot Spencer Marker answers one of your aviation-related questions each week. See past installments here (this is the first week!) and submit your own`to…

Ask a Pilot with Spencer: Do Pilots Sleep During a Flight?

In our Ask a Pilot series, pilot Spencer Marker answers one of your aviation-related questions each week. See past installments here and submit your own to [email protected] The question Does the…

Ask a Pilot with Spencer: How Do You Become an Airline Pilot?

In our Ask a Pilot series, pilot Spencer Marker answers one of your aviation-related questions each week. See past installments here and submit your own to [email protected] The question How do…