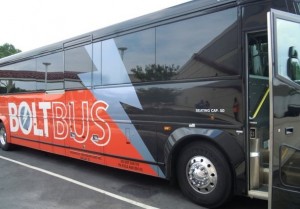 On Saturday I was planning on flying from Washington, D.C., to Toronto, but my sister called and said my dad wasn’t feeling great. So I canceled my plane ticket and did some research on getting to New York so I could see my dad. This is what I learned: Airfares between the two cities are ridiculously expensive, especially last minute: $382 nonstop and $262 with a stop (12-hour travel time). Even if the tickets were $50 I wouldn’t have flown since you have to go out to the airport; deal with security, delays, and boarding chaos; and then arrive to an airport miles away from the city.

My first choice was the train since it’s the most reliable and comfortable; has the most legroom, biggest seats, a dining car, and electrical outlets; and departs and arrives in the center of the cities. But Amtrak’s last-minute fares were expensive too: $134 for the regular train (takes 3 hours and 25 minutes). Taking the Acela Express (2 hours and 45 minutes) was $229. Note: There was a regular train for $78, but it left at 3:15 a.m.

I then looked up bus fares. While I was in D.C. I kept seeing Bolt Bus, Mega Bus, and Greyhound drive by with big signs implying they are cheap, so I checked them out (there are other companies too). When I logged on to their websites I discovered they really are cheap.

My first choice was Bolt Bus because most of my friends/followers on Twitter expressed their love for them. Bolt had buses departing every 30 minutes and last-minute fares for as low as $17.50, but the mornings were all sold out, so I looked at Mega Bus. Mega had last-minute fares as low as $15 but the first available bus wasn’t until 11:30 a.m. Since Bolt Bus had one leaving at 1 p.m. and Mega’s trip duration was 15 minutes longer, I figured I would go with Bolt.

Just for the fun of it I logged on to Greyhound Express (Note: when I did a search for regular Greyhound, not Express, travel times were twice as long and expensive). Greyhound Express had buses leaving every 90 minutes and starting at $19 with a travel time of 4 hours and 18 minutes. I was tempted to go with them, but since I wanted to try Bolt Bus out I gave them my credit card. Bolt charged a $1 transaction fee, so the total for a one-way ticket to NYC was $20. TWENTY DOLLARS! Isn’t that insane? You can’t take a taxi 5 miles for $20, yet you can take a much more comfortable bus 225 miles. Makes no sense, but I’m not arguing.

By the way, I could’ve rented a car, but didn’t even bother looking at those prices since I was just one person and knew the drop-off fee would be ridiculous. If I were traveling with three other people I possibly would’ve, but with bus prices so cheap and gas prices so expensive, why bother?

Here’s my tips and observations from the Bolt Bus Trip
–Bolt Bus leaves from the upper parking lot of Washington, D.C.’s Union Station. Mega and Greyhound don’t leave from here.

-To get to Union Station I was going to take the Metro near my hotel, but the ticket agent said, You can pay $1.85 to go one stop, but if I were you I would walk. It’s just five minutes away. It turned out to be about 12 minutes, but I’m glad I walked since I got to see the neighborhood and stop at one of the restaurants I passed. I bought a meatball grinder from Pot Belly ($4.85), which I later shared with my seatmate. One thing is for sure: sharing a meal with a stranger (or at least offering) breaks the ice.

-It was my first time in Union Station, and it really is beautiful. I’m so glad I got to see it (but Grand Central blows it away in terms of beauty).

-My ticket was for 1 p.m., but since I didn’t have a printer I went up to one of the Bolt Bus agents hanging out near the buses and told him my dilemma and he asked if I had my confirmation number. I just showed him my email receipt from my Blackberry, and he said, You can get on now. I said, But I’m on the 1 p.m., not the 12:30. He said, You can take this one if you like–it’s leaving now. I asked if I would get a better seat if I waited for the 1 p.m., but he said that bus would probably be late so I should go now. I did. When I got on the bus I was expecting to be stuck in the last row, but I wasn’t. The first row had a vacant seat and so did the third. I took the third since I could stick my carry-on bag somewhat under it (my bag was too big, as there isn’t the same amount of room as there is under plane seats).

-My seatmate was a Congolese guy who turned out to be really nice. He works for a nonprofit Congo organization and travels between NY and D.C. at least once a week. He almost always takes Bolt Bus, and he taught me a few tricks. One is that he chooses a seat in the first eight rows because they have electrical outlets, and two is that if you want to get an “A” boarding pass, all you need to do is register with Bolt Bus Rewards Program. I hadn’t registered so I had a “C” card. I guess they board like Southwest Airlines. FYI: I just registered (after the trip) and it took 60 seconds, so it’s worth it.

-We left on time.

-It took 20 minutes for us to get out of D.C. and onto the thruway.

-The bus only had four empty seats out of 50.

-You can purchase tickets online until three hours before departure (for example: they stop selling the 3 p.m. bus at 12 p.m.).

-They don’t oversell their schedules, so they guarantee you a seat provided you arrive a minimum of 15 minutes prior to the scheduled departure.

– Five minutes prior to departure, any unclaimed seats are released to walk-up and standby passengers. I should’ve shown up for the 9 a.m.!

-The seats recline but they don’t give you that much legroom.

-There’s not a lot of room for overhead space, so big bags need to go below the bus (no charge).

-There is a toilet on board.

-No dogs, cats, birds, or other animals can be transported (except service animals).

-Our bus driver was an excellent driver and had a personality like Cuba Gooding Jr.–he kind of looked like him too. What was annoying is that he was using a Nextel phone that’s like a walkie talkie. Their initial sound needs to be eliminated, but I appreciated the fact that he was in constant contact with the drivers in front of and behind him to find out about road conditions. He made a detour but we still got stuck in traffic twice due to accidents.

-The driver also played soft music. I was just three rows away and it sounded like it was coming from a passenger’s headphones–it wasn’t loud enough to enjoy.

-I learned we were on a 45-foot bus when the driver was ragging to his colleague about a local D.C. bus driver who parked in two lanes: “He said you know that bus driver ain’t no bus driver and he’s just in a 35-foot bus, not like our 45 foot.”

-Two different cars lost their tied-down luggage. That was the cause of one of our delays as cars had to swerve out of the way of a suitcase.

-We took a 15-minute break in Natch, Delaware, at their incredible one-year-old (it opened June 28, 2010) Welcome Center. It’s located on the Delaware Turnpike part of I-95 between Exit 1 (Rte. 896) and Exit 3 (Rte. 23). The 42,000-square-foot rest stop has 21 fuel pumps and a bunch of restaurants including Baja Fresh, Brioche Dorée, Burger King, Cinnabon/Carvel, Famous Famiglia Pizza, Popeye’s Chicken, and Starbucks. There’s also Z Market, Postcards from Delaware, and iShades shops. (Delaware has tax-free shopping.) What I appreciated the most was no line for the bathrooms–they had plenty.

-The trip took 5 hours and 30 minutes thanks to traffic.

-We traveled five states in five hours–not bad for one day.

-To get to Connecticut I took Metro North ($9.25) from Grand Central Terminal. Trains leave every hour.

-My dad’s doing much better, thanks for thinking of him!