Bosnia-Herzegovina & Croatia, part 3: Mostar and Ston, on the road to Split

This is the third installment in a six-part series following JohnnyJet.com writer Cynthia Cunniff through her experience of touring Bosnia-Herzegovina & Croatia with Insight Vacations. Head back to the series home page for the full experience or jump straight to:

The city of Mostar in Bosnia-Herzegovina is set up for tourists. There’s specified public parking a short walk from the ancient stone streets of its center and the bustle of shops selling scarves, handcrafted jams, honey, gelato, and trinkets.

Mostar’s main attraction is the Stari Most Bridge that bisects the old town. It’s comprised of stones worn slick from the wear and tear of visitors making their way up the hill to cafes and lookouts over the cliffs of the Neretva river.

Stari Most means “old bridge,” but unlike most of the town, the bridge is new—as its 427-year-old predecessor was blown to bits by the Croatian army during the last war. It was rebuilt in the early 2000s using stonework recovered from the riverbed. Once the bridge was completed, the tradition of locals diving off of it for money—dating back to 1664, when someone first took note of divers using the bridge in this manner—continued being an attraction.

The beauty of Mostar is in the architectural details of cross-cultural living, its cobbled streets, and the tiny alleyways that lead to lush views over the river and forests.

A delicious stop in Ston, Croatia
The city of Ston, Croatia, was a lunch stop with Insight that included getting in a boat set in glowing turquoise seas and being taken to the heart of an oyster farm. At the oyster farm, the farmer pulled in his haul in front of us and deftly shucked fresh oysters for the group to try.

I love oysters, but I have never had one of the caliber we experienced that day. The richness of the Dalmatian coast and Adriatic resonated through that one beautiful oyster. It’s said that Napolean fell in love with them—and if you can please a French palate, you’re doing ok.

The oyster was a highlight but was a teaser to the array of seafood on offer at Bota Šare restaurant, where we dined al fresco and enjoyed each other’s company with the ocean as a backdrop.

Ston is also known for its massive 4.3-mile wall that acted as fortification and can be seen arching over the hill as you enter the town. Built in the 14th century to protect the highly valued salt mines from invaders, they can be hiked, but they’ll probably test your cardio endurance.

Not your ordinary rest stops
One of the things I enjoy while traveling with Insight Vacations is the stops that inevitably await on the way to the next stay. Sometimes, it’s a farm stand overlooking a vast valley with grown figs, citrus, and countless other produce, and others it’s a beautifully appointed gas station rest stop that’s not only clean, but also full of local treats and even full-on fresh food cafes. On this tour, once again, even the gas station stops were a far cry from what we’re used to in the US—where you can only pray you don’t get dysentery from using the restroom.

The ride on an Insight tour is full of eye candy. It was hard to believe the beautiful views from the simple farm stand stop, which was also the perfect place for foodies to pick up some farm-to-table jams, oils, honeys, spices, and compotes to take home.

A fluffy, doe-eyed dog named Ivan (owned by the stand proprietors) fetched tangerines his master threw, waiting patiently for each toss. The entertainment was highlighted by the beautifully prepared dried fruits and nuts grown in the valley below, arranged by Insight as a gift for us. 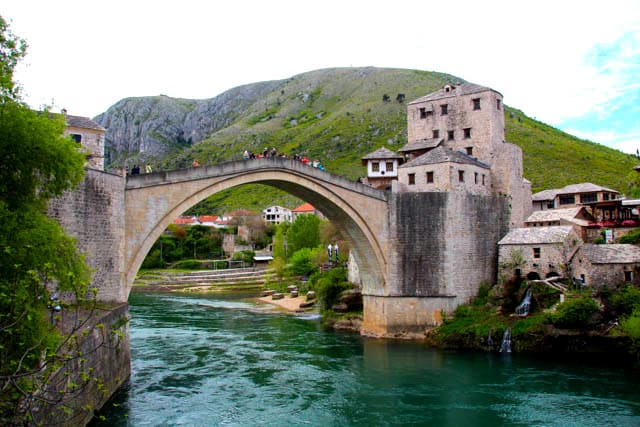 Stari Most Bridge in Mostar, Bosnia-Herzegovina 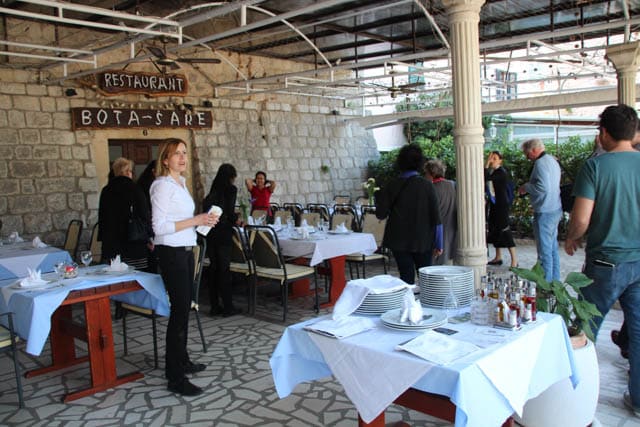 Preparing for a seafood feast at Restorani Bota Šare in Ston, Croatia 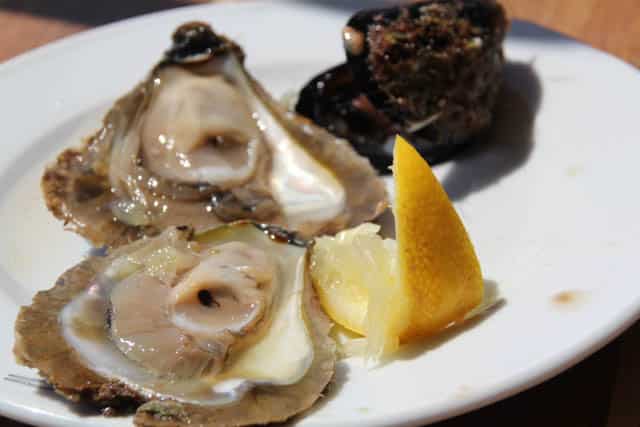 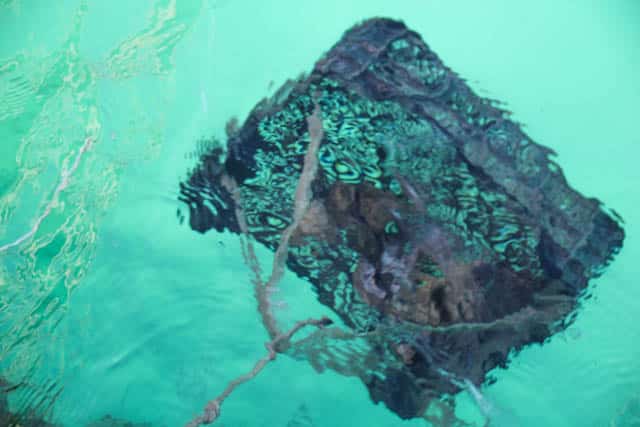 Delicious oysters pulled up to be shucked and immediately eaten 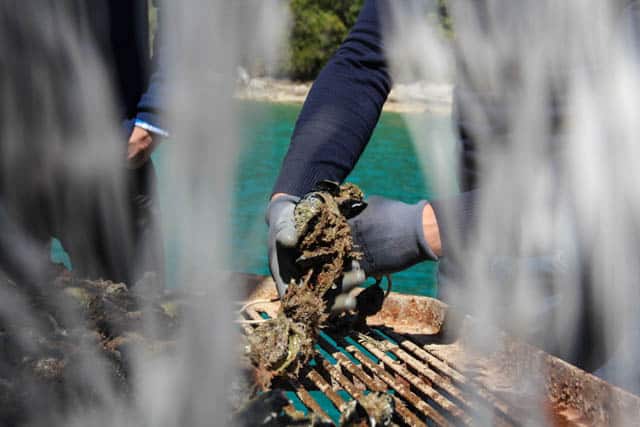 Farmer taking oysters off the line in Ston, Croatia 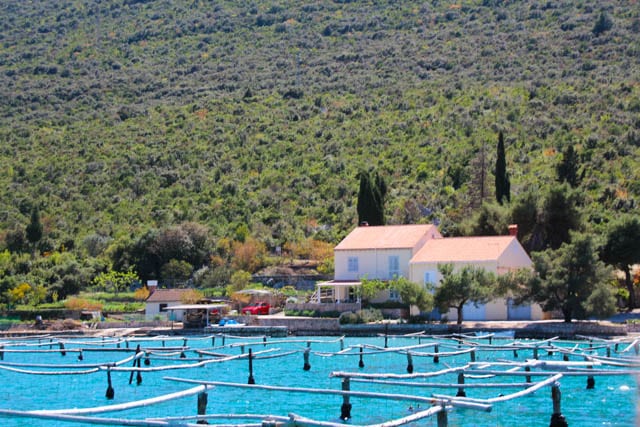 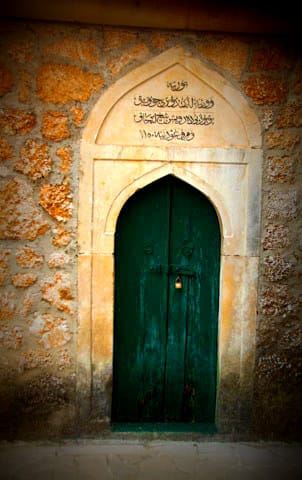 A doorway in Mostar 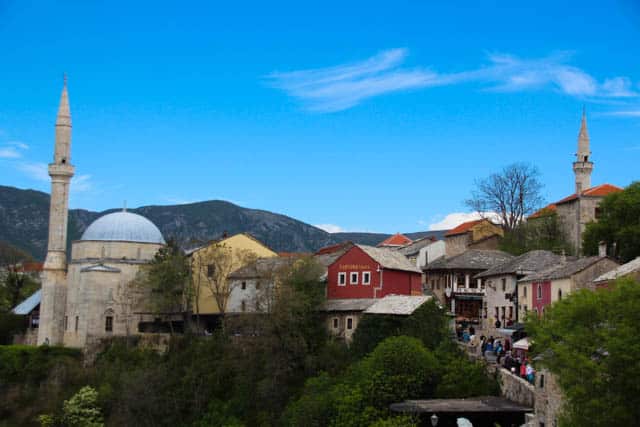 The old part of Mostar: shops, sweets and trinkets 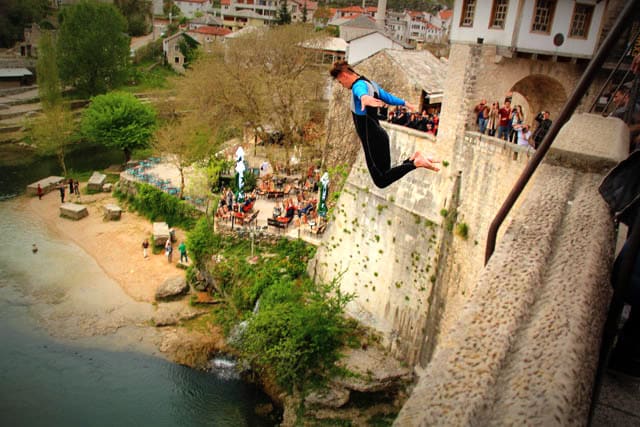 For 20 Euros professional divers will jump off the Stari Most Bridge in Mostar, Bosnia-Herzegovina 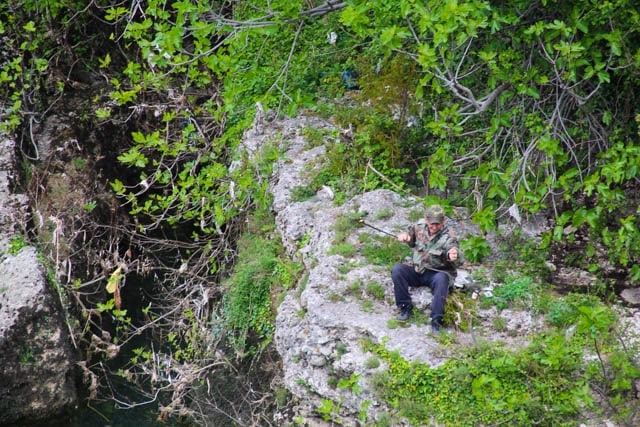 On the banks of the Neretva in Mostar 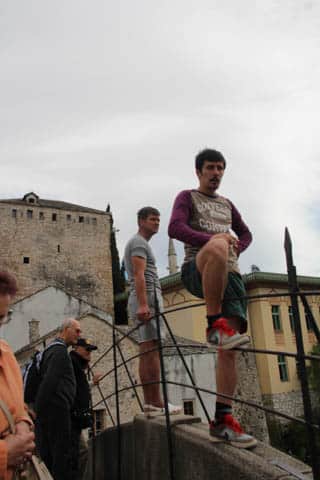 Waiting for tourists to pay them to jump 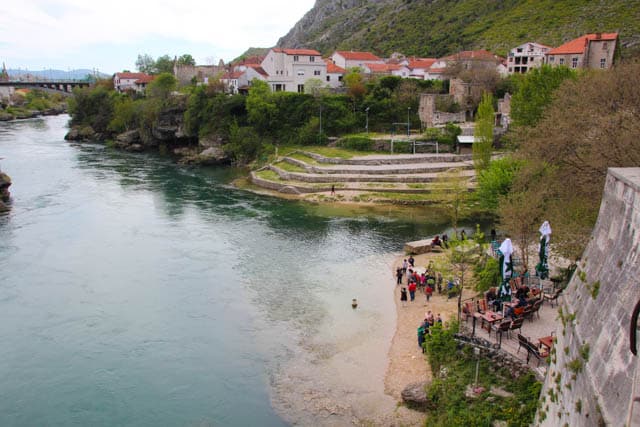 Under the Stari Most Bridge 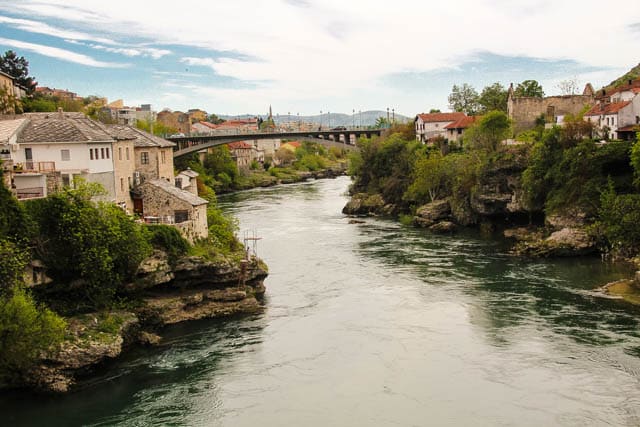 Mostar sits on either side of the river Neretva. This is the view from the famous Stari Most Bridge.

4 Comments On "Bosnia-Herzegovina & Croatia, part 3: Mostar and Ston, on the road to Split"