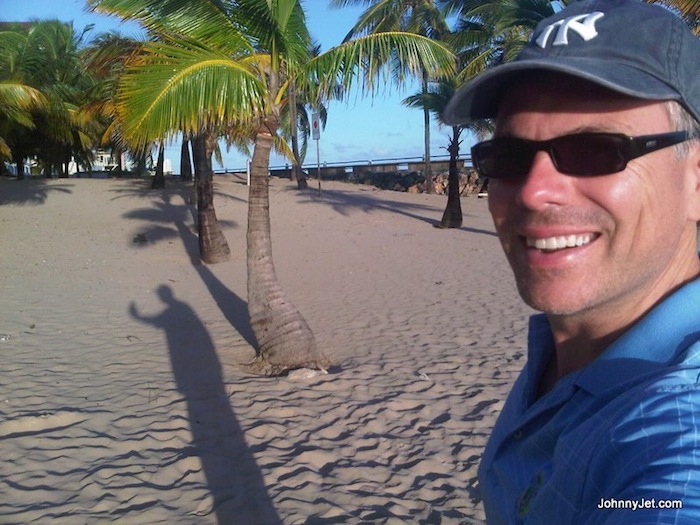 I left off last week from Delray Beach, Florida. From there I drove with my buddy Kerry Morrissey to Hollywood Beach to attend a few Phocuswright parties. Phocuswright is a huge industry conference with the who’s who in travel. Since I was taking an early flight to the Caribbean the next morning I couldn’t attend, but I was able to see a bunch of friends and make new ones at some of the opening-night parties. I dropped by the Trippy.com and TNOOZ parties as well as the TravelZoo Awards.

Hotel Urbano
My buddy Kerry is the PR director for Ocean Properties, who own and/or manage 120 hotels around North America. I’ve written about a bunch of their properties in the past, including the Delray Beach Marriott, Hollywood Beach Marriott, The Albuquerque Hilton, Vancouver Holiday Inn, Harborside Hotel in Maine. Their newest is Hotel Urbano in Miami, which is a boutique property with just 65 rooms. From the outside it doesn’t look like much–it used to be a Hampton Inn–but when you walk through the front door, you know you are in something a lot hipper than a Hampton Inn. Unfortunately, I only spent 10 hours there because I had an early flight (FYI: Miami International Airport is just 10 minutes away) but I did check out the hotel’s great artwork (they change exhibitions every four months) and learned that the rooms (and bed) are really comfortable. They have free Wi-Fi, heavy room doors so you don’t hear the hallway traffic, and clean bathrooms. Hotel Urbano is right near the on-off ramp of I- 95 and has a stylish pool. Rack room rates start at $159.

Miami to San Juan
I was heading to the British Virgin Islands, and like most people, to get there I needed to go through Puerto Rico. I got upgraded on the 2-hour-and-12-minute flight from Miami to San Juan and was excited to take my seat in 3B, especially since I was hungry. I know, nothing like a fattening airplane meal, right? After I boarded, my feelings changed when I saw four uniformed Army soldiers walking past me to coach. I immediately got up and asked the flight attendant if I could give my seat to one of them, and she said I had to ask the Captain for permission. He was standing in the galley greeting passengers and he said I could, but I needed to wait until boarding was complete. So when it was done the flight attendant asked me which one I wanted to upgrade. I said she could choose, but make sure they are in an aisle (I’m an aisle kind of guy). The first soldier (I think a ranking officer) declined and deferred it to one of the younger guys sitting behind him. That kid didn’t say “you sure” twice. He darted up to first. Just like last week, he didn’t know it was me who upgraded him, but the flight attendants knew and sure were thankful. They treated me like a rock star, and the box of chocolates I brought them didn’t hurt.

San Juan Airport
We had a 90-minute layover in SJU and I learned their airport food is crazy expensive with not a lot of choices. I ended up getting a six-piece of chicken tenders that came with a few fries and a soda for $13.95! TIP: According to the gate agent, they offer better (including local) and cheaper food before security.

San Juan to Beef Island
American flies 64-seater ATR 72s. Usually, I choose to sit in the front of planes because it’s less bumpy and I can get off quicker, but on ATRs I always choose the last row since that’s where the only door is located. Fortunately, flight time to Tortola’s Beef Island on the uncomfortable bird is just 32 minutes, and if it hadn’t been for the nasty dirty, scratched old windows, I would’ve taken incredible pictures of the views.

In the BVIs they don’t process passengers too quickly, and even though I was first in line I still waited a good five minutes because they take the residents first. Residents have a separate line and there are just two agents working. Visitors need to fill out two forms for the BVIs and American ran out of the forms on the plane, so those who weren’t early in picking one up had to spend time filling it out in the airport. Tip: Always keep a couple custom forms in your bag if you frequent a destination.

Beef Island to Virgin Gorda Ferry
The good news is we were able to catch an earlier ferry (4:15 p.m.), so we didn’t have to sit around until 6 p.m. That made a huge difference–we were able to enjoy the scenery in the sunlight on the 45-minute ferry ride. (It was a one-hour ride on the return since we made a stop.) 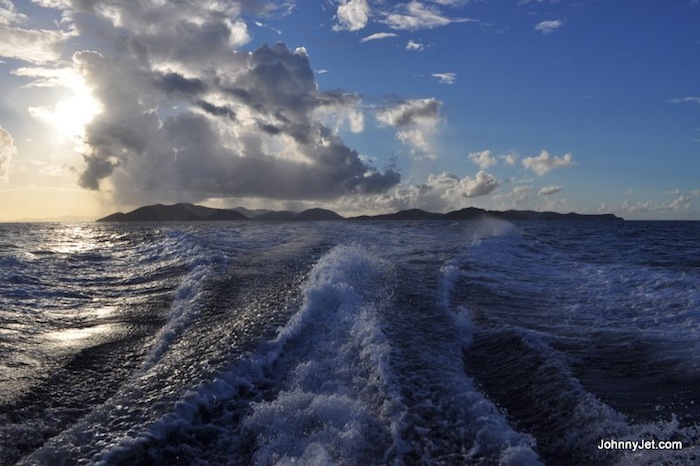 Leverick Bay Hotel in Virgin Gorda
Getting in early also meant we could check into our hotel and have dinner sooner. That’s a good thing, because finding someone who works at the Leverick Bay isn’t an easy thing. They don’t staff the reception, but luckily the woman in charge was nearby. She gave us our room keys, helped us load our bags into her truck, and drove them up to our rooms. She informed us the grocery store on property closes at 7 p.m. so we went to stock up on bottled water, ginger beer, and snacks. By the way, the store has quite the wine collection. The rooms at Leverick Bay aren’t anything grand, but they are of a good size and are fairly clean and comfortable. They have balconies, high ceilings, tiled floors, a ceiling fan, air-conditioning, mini-fridge, old TV, ancient small safe, and phone. Don’t bother calling reception because no one answers. I learned that the hard way when I misplaced my room key, but I got it opened thanks to the bartender who phoned one of the M.I.A. workers. FYI: Bring shampoo and conditioner, because they don’t supply it, but there are plenty of mini bars of cheap soap. Leverick Bay also has a Laundromat and free Internet, which is painfully slow except when everyone is sleeping in the middle of the night. Rates begin at $119 a night, but next time I will stay at Bitter End Yacht Club or possibly Saba Rock.

About the British Virgin Islands
This was my first time to the British Virgin Islands (BVIs) and I was surprised to find that they deal in U.S. dollars and have electrical outlets that fit our plugs. I also learned there aren’t that many workers that are originally from the BVIs working there; most of them are from the other Caribbean islands. But all the people were friendly and the waitress at our hotel restaurant touched my shoulder whenever I said something funny–including a wise crack on how could they not offer dessert. Other notables: I didn’t need a sweater as the temperature ranged from 78F to 86F, but you do need bug repellent–especially after it rains (they sell it at the local grocery store).

Saba Rock
The Restaurant at Leverick Bay is mediocre, so for something more special (and dessert) eat at Saba Rock, which is literally a restaurant (and hotel) on a rock. They provide a free on-demand ferry for guests/patrons, which was about a 15-minute ride from our hotel. At Saba Rock we sat outside and enjoyed our food while staring up at the stars or at the silhouettes of the huge tarpon circling the underwater lights set up near the dock. 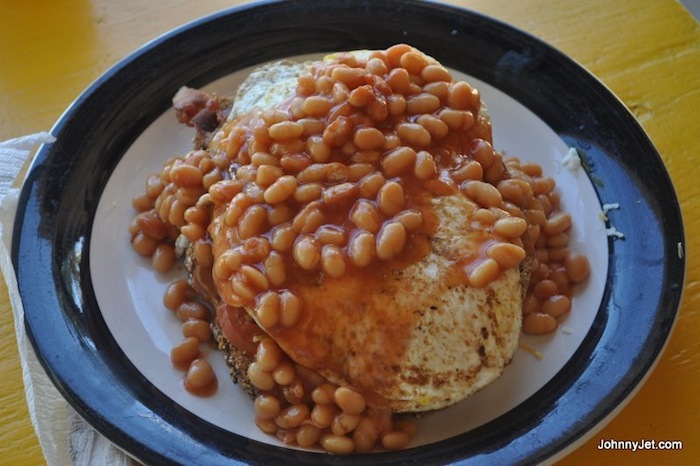 Trellis Bay Cyber Café
Speaking of food, on the morning of our departure, instead of eating a crappy breakfast sandwich from the hotel’s grocery store–which is the only breakfast offered at Leverick–we waited to eat until we got back to Beef Island. After our ferry arrived we loaded our bags up in the waiting taxi (free ferry for passengers) and checked in for our 1:05 p.m. American Airlines flight, paid our departure tax, and then walked the few hundred yards back toward the dock to eat at the Trellis Bay Cyber Café;. It’s a great place to spend a three-hour layover and I was happy to pay the $5 charge for two hours of Wi-Fi ($10 for 24 hours) and order some food from the owner. I believe the owner’s name is Jeremy; he’s an English grump who needs to work on his people skills, but at least he makes a pretty good omelet ($11.75). He also needs to lose the techno music. 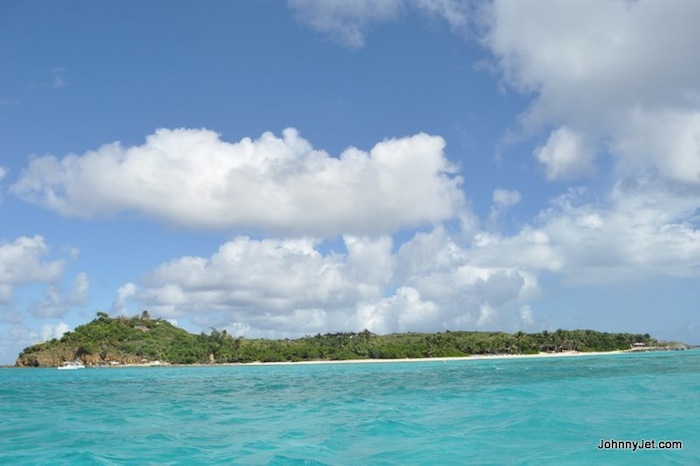 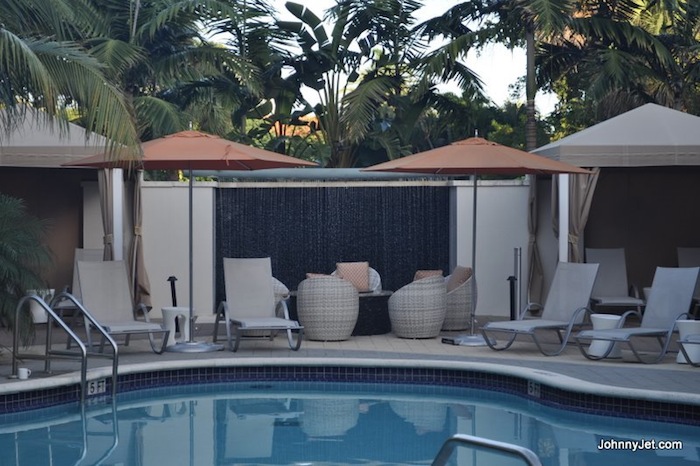 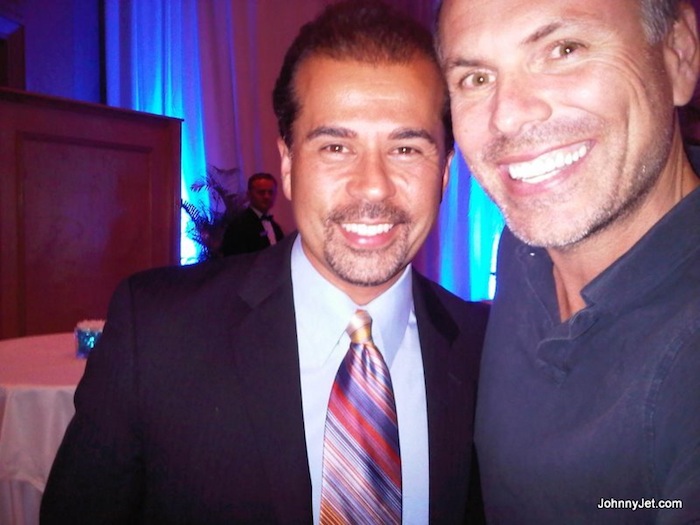 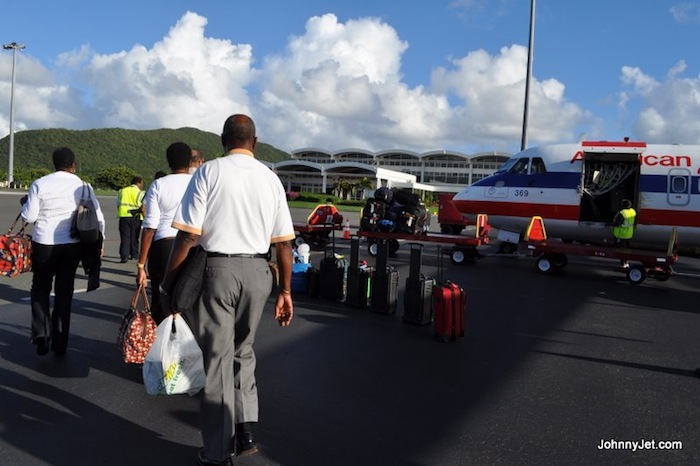 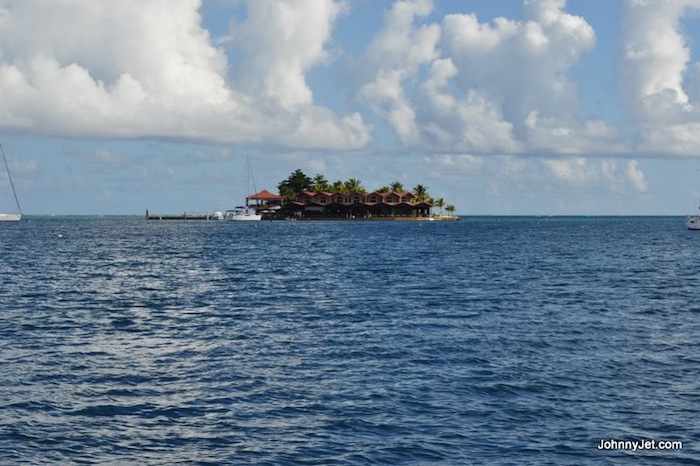 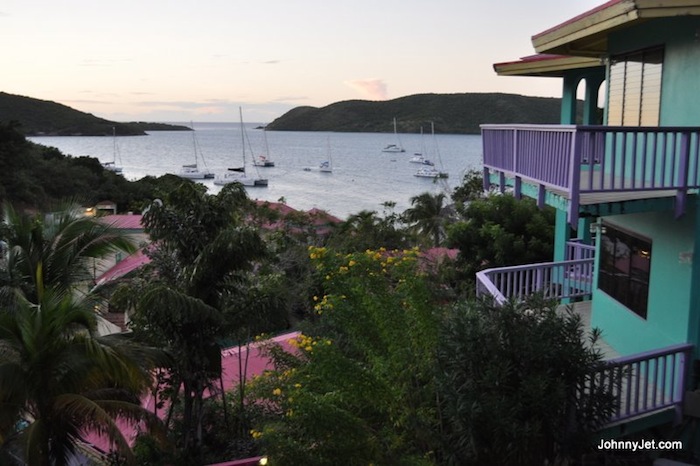 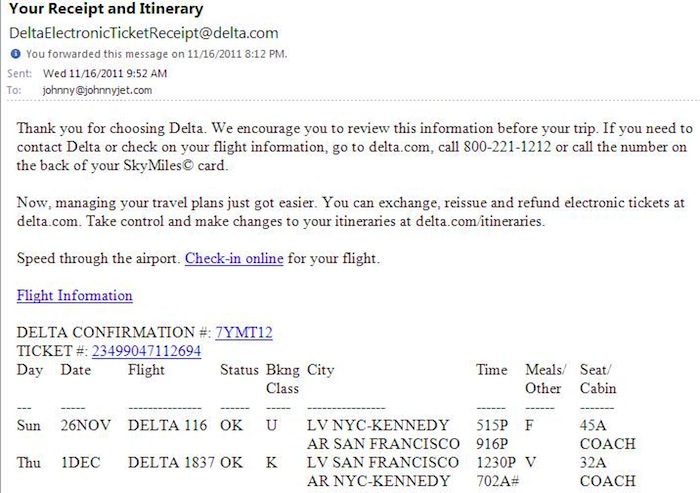