Greetings from 36,000 feet! If you recall on November 1, I wrote a tip titled “LAX-Departing Flights May Not Serve Food for a Week in Wake of Listeria Outbreak.” I published this post within an hour of the news breaking that passengers should bring food on their flights out of LAX because American Airlines had fired their catering company, Gate Gourmet. 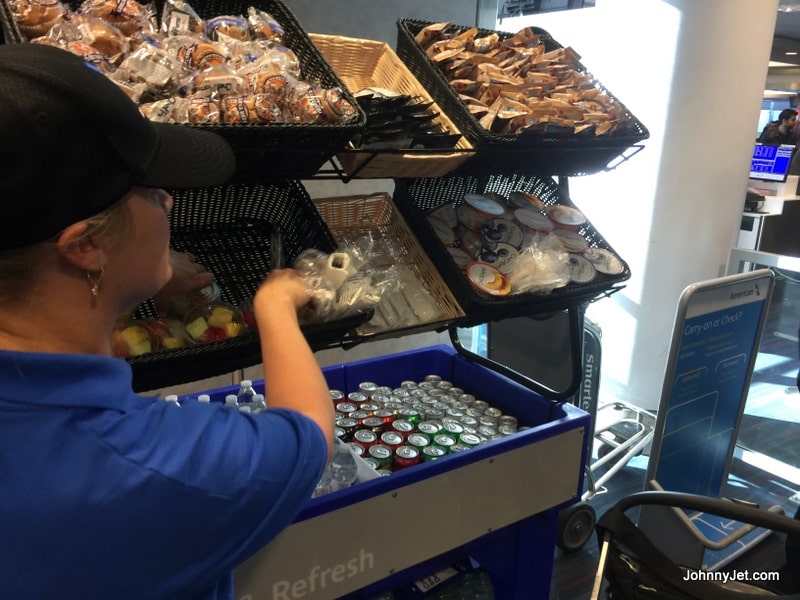 Supposedly, it was only going to last for a week or so while they worked on finding a catering alternative. Natalie, Jack and I flew on November 8 from LAX to Nashville on American and the gate agents made an announcement that there would be no food on board and suggested passengers buy their own or grab one of their snacks when boarding. The airline had a push cart by the door with an employee making sure each passenger grabbed no more than one snack. The choices for our morning flight were: fruit cup, muffin, mixed nuts, granola bar or a yogurt and a drink. See photo above.

Then on November 14, American Airlines sent me this email: “On Wednesday, Nov. 1, we suspended using the services of one of our onboard caterers at Los Angeles International (LAX). With this change, we regret to inform you that we will have limited service at this time. We’re doing all we can to resolve this matter as quickly as possible to ensure your dining experience returns to our standard service levels. If your meal service is impacted, you will receive an electronic travel voucher for use on a future flight. Thank you for your understanding and patience as we work through this transition.”

I thought for sure I didn’t have to worry about my flight today (November 26) to Tokyo but yesterday American sent me a $200 travel voucher along with an email that said: “Here is the voucher we promised. It’s valid for one year from today and you can use it to purchase travel on American/American Eagle for anyone you choose. Ready to book your flights? Call us at 800-433-XXXX. If there’s anything further we can help you with, don’t hesitate to reach us via our online web form on aa.com. We’re here to help. Thank you for flying American Airlines!”

I was stoked to get $200 and was expecting food service in business class to just be cold sandwiches like I’d read in some other reports. But I was pleasantly surprised to find that everything seemed back to normal. The chicken entrée I pre-ordered back in late October was served and … actually, why don’t I just show you the photos so you can see what was served. FYI: There were no menus. 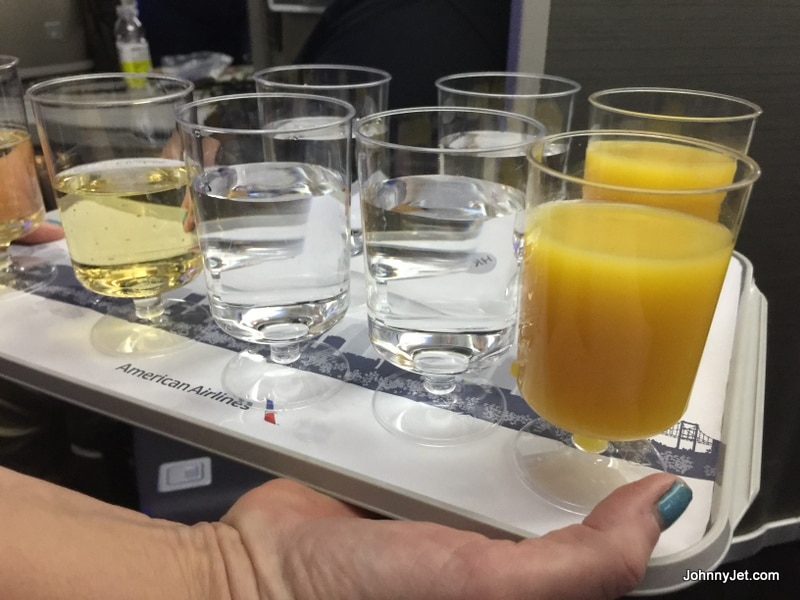 Pre-drinks were served. Choice of champagne, water or orange juice. 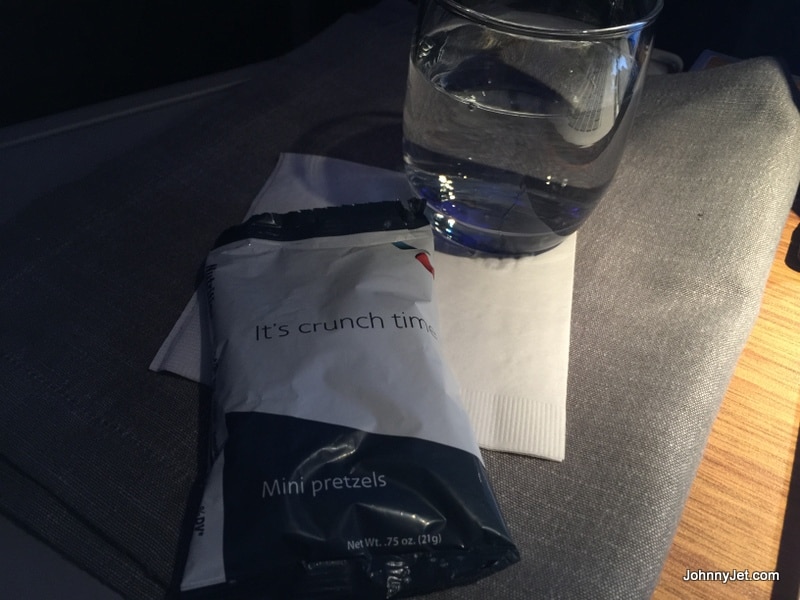 The drink cart came down the aisle right after takeoff (within minutes). No warm nuts just a bag of mini pretzels. 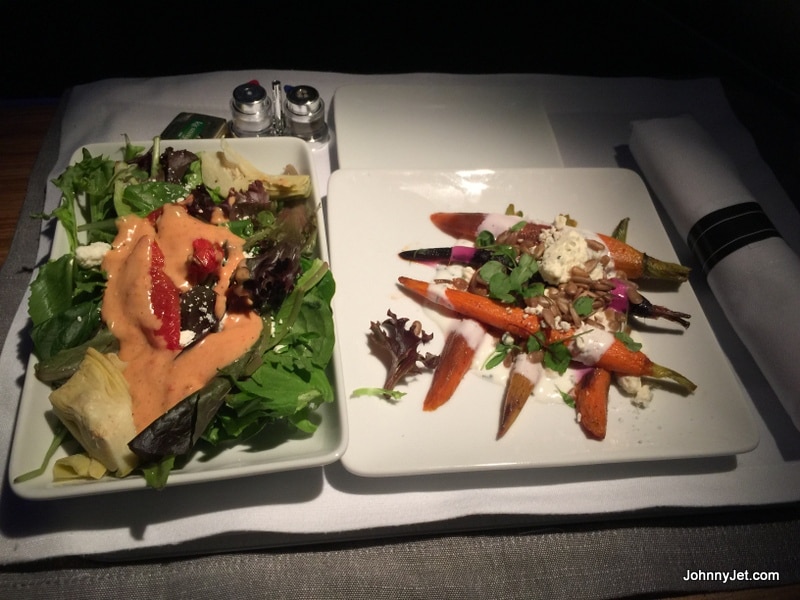 Appetizers were served. A mixed green salad with goat cheese and a plate of cooked carrots and beets with blue cheese. They also came around with the usual bread tray. Yes, they had pretzel rolls! 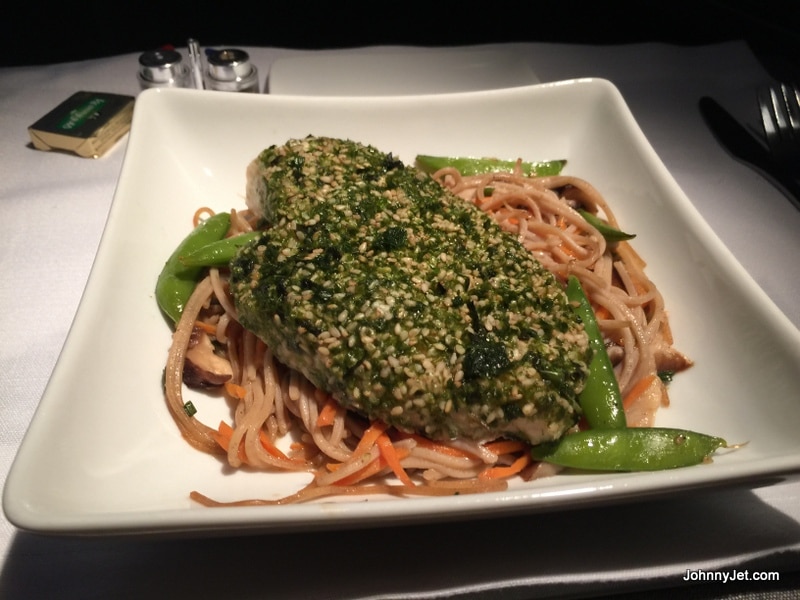 Dinner was served. I had the nori-crusted chicken with soba noodles and sugar snap peas. The only other option was beef. Usually, they have multiple choices including a fish and vegetarian option but they didn’t on this flight. 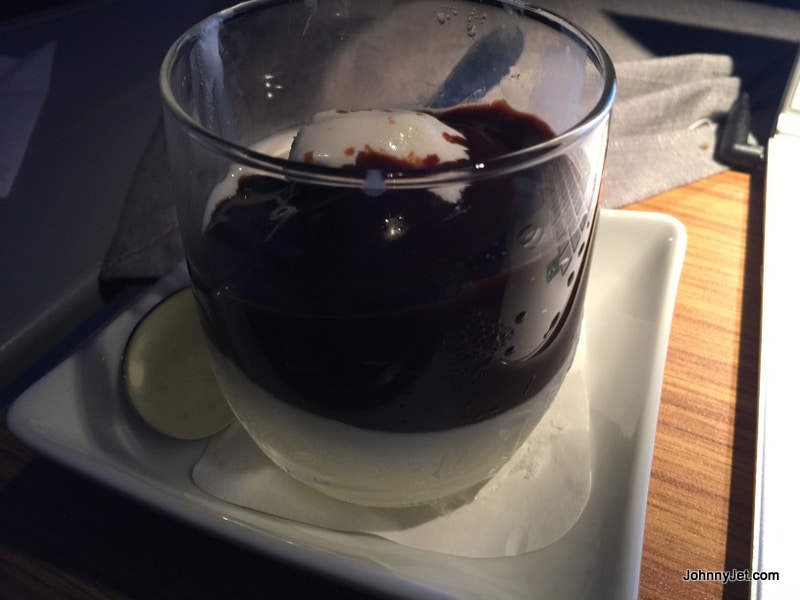 Then came dessert and a choice of chocolate mousse, an ice cream sundae or a cheese plate. You can see from the photo above what I chose. 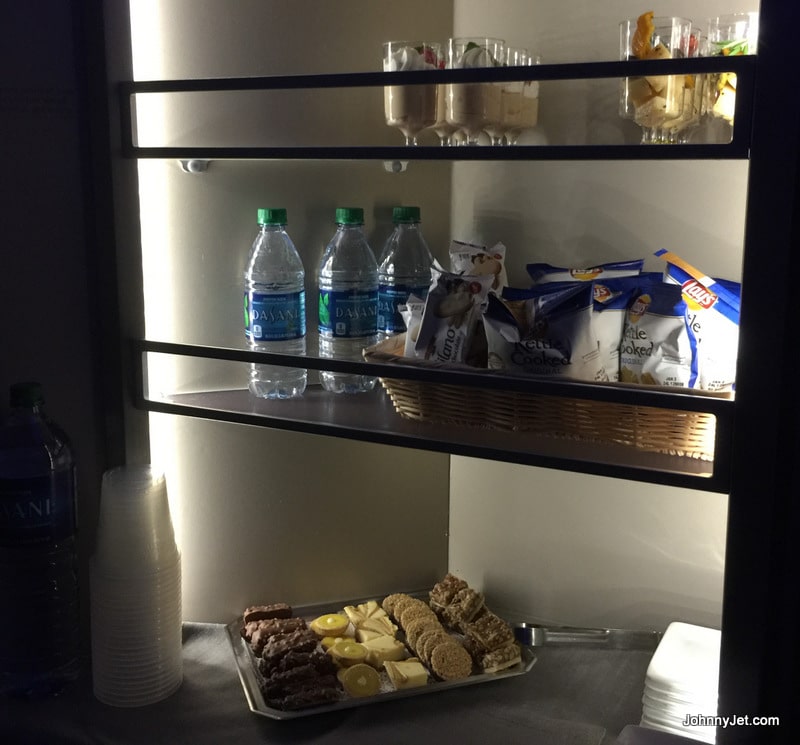 Then I passed out for an hour or so from my mini food coma and when I woke up to use the bathroom, I was pleasantly surprised to see that they had snacks (the nuts you get on flights to Hawaii), desserts (mousse and cookies), fruit salad and sandwiches in the galley set up. 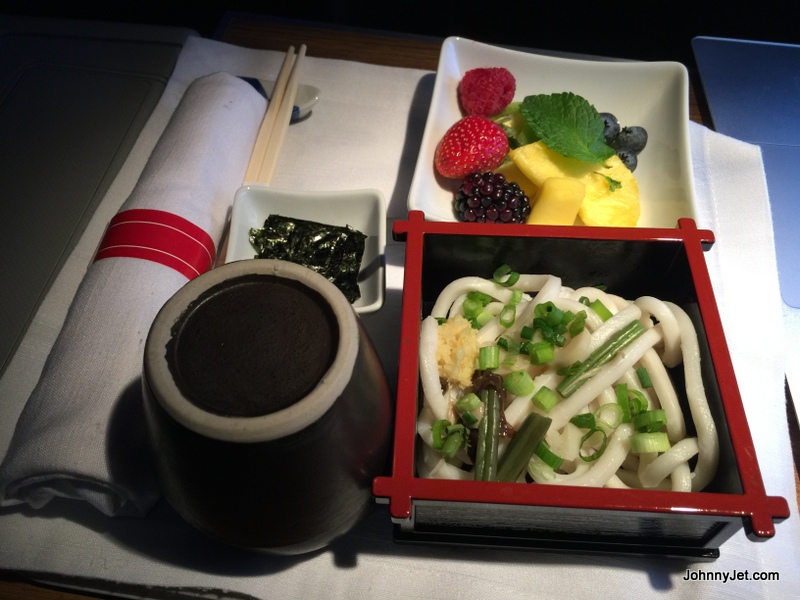 Five hours prior to landing the flight attendants asked if I would like a mid-flight snack. Choice was a roast beef wrap or cold soba noodles. I chose the latter and they’re we darn good and a beautiful presentation. 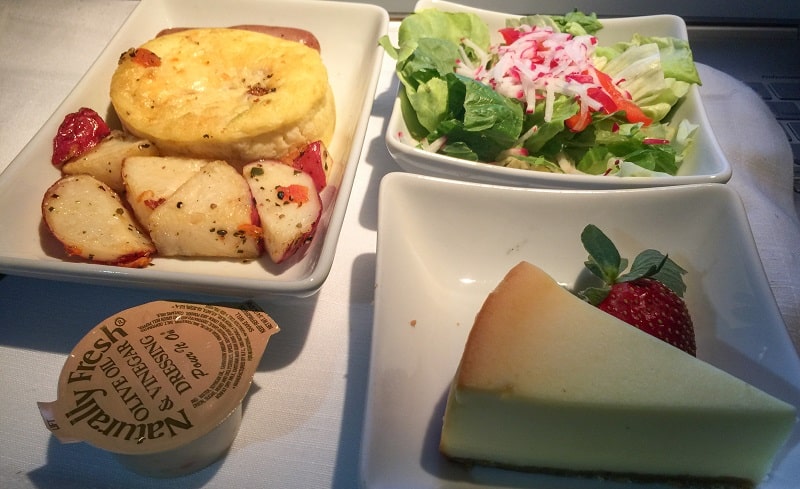 There was one more food service prior to landing (95 minutes out). Flight attendants came by with food cart then drink cart. Choice was teriyaki chicken or a quiche with sausage. I had the latter which was good  but not hot. Side salad with oriental dressing and Cheesecake on tray.

I spoke to the flight attendants and told them I was impressed that everything was operating like business as usual. They said, “Not quite,” and told me that it was a real mess when it first happened but that things are getting much better. They also said that supposedly, catering will be back to normal on November 28 and that all passengers in the business class cabin received a $200 travel voucher and economy class passengers received $100. “We lucked out,” I said. UPDATE: I’m on a AA flight now and the flight attendants told me that a new catering company was hired on November 27 and everything should be back to normal. They also raved about the new company. 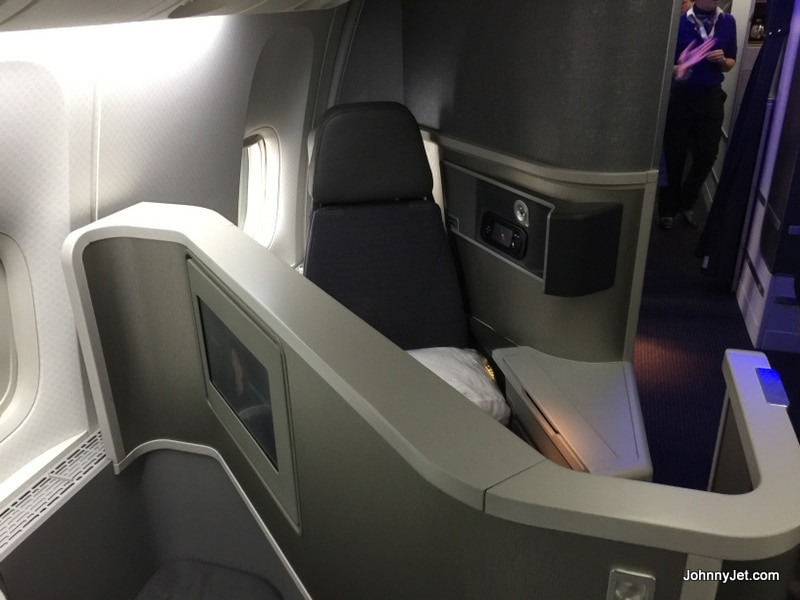 BTW: I’m on one of American Airlines’ 777-200s with their new business class interior and it’s really nice. There are 37 flatbed seats and I’m in one of the rear facing ones (7A). 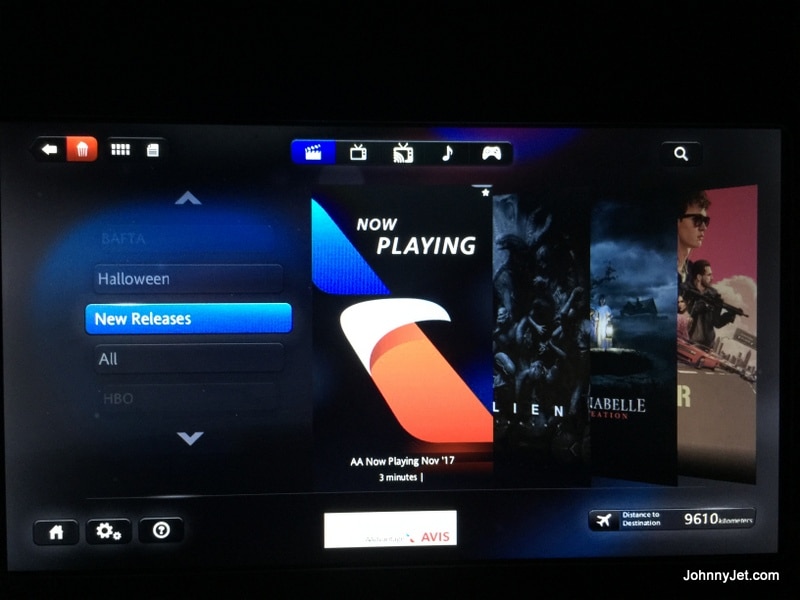 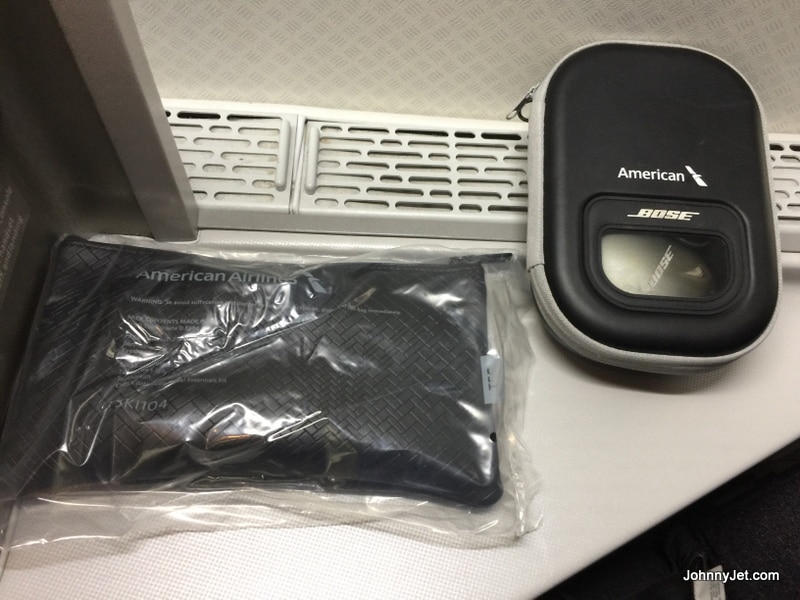 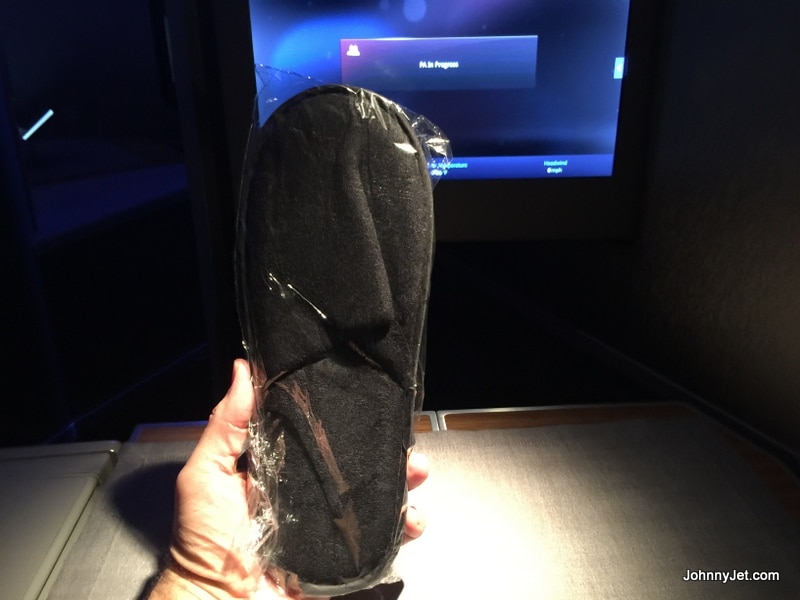 The only thing the seat lacks is storage and the foot fest is narrow, making it tight. It could be that I have size 13 feet but I don’t think so. They have amenity kits and slippers which you never see on U.S. carriers except on flights to Japan. 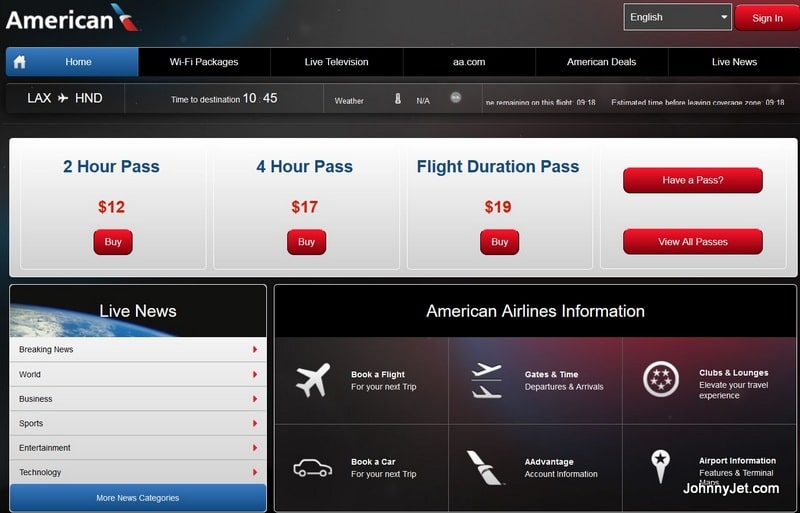 The WiFi works well and a pass for the entire flight is just $19. A two-hour pass was $12. 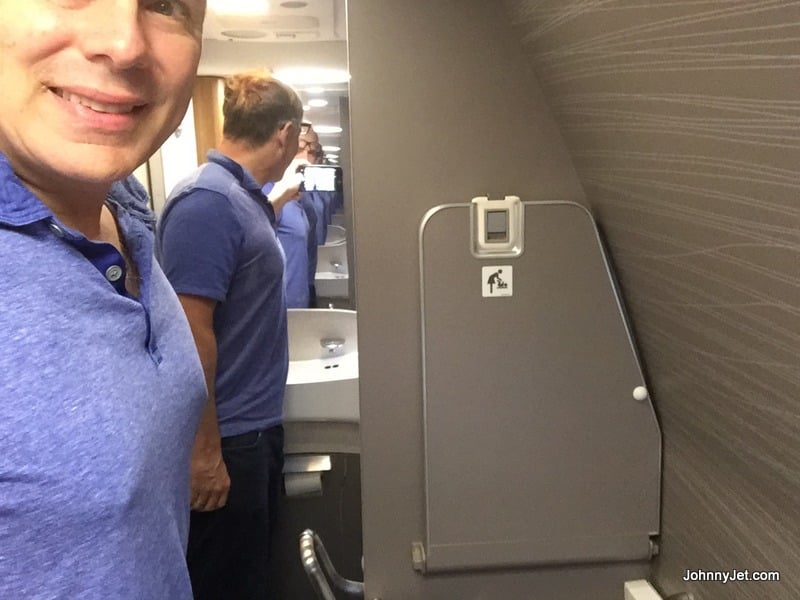 The bathroom is huge and has been redone too. 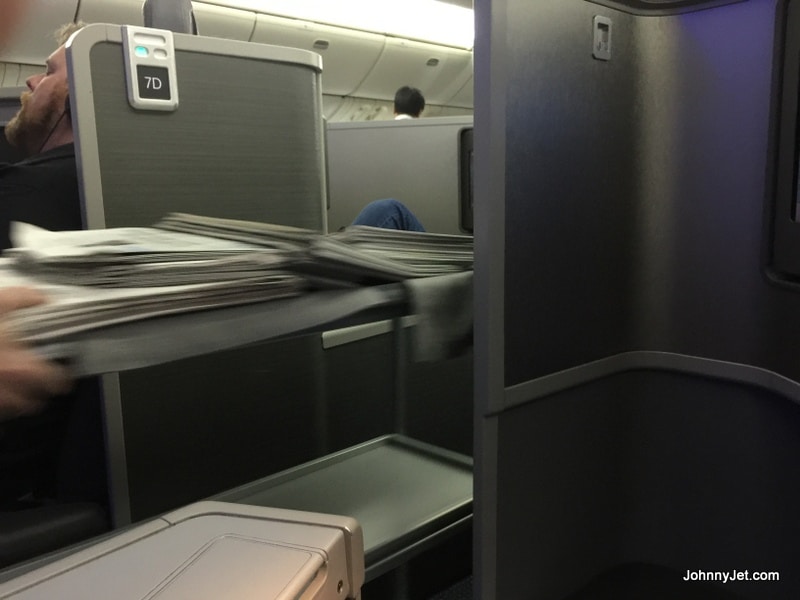 One strange thing: A flight attendant came down the aisle asking if anyone wanted old newspapers. The papers were dated Wednesday, November 22. Today is November 26 … that’s one I’ve never seen before!

Flight time is 11:16 and thanks to this great seat, the flight feels short since I’m getting so much work done, including writing this post.