There’s an unsolved mystery going on at Delta Air Lines and Atlanta Airport. Aviation insider xJonNYC tweeted a disturbing video with the caption: “Oh my. Anyone know when?” 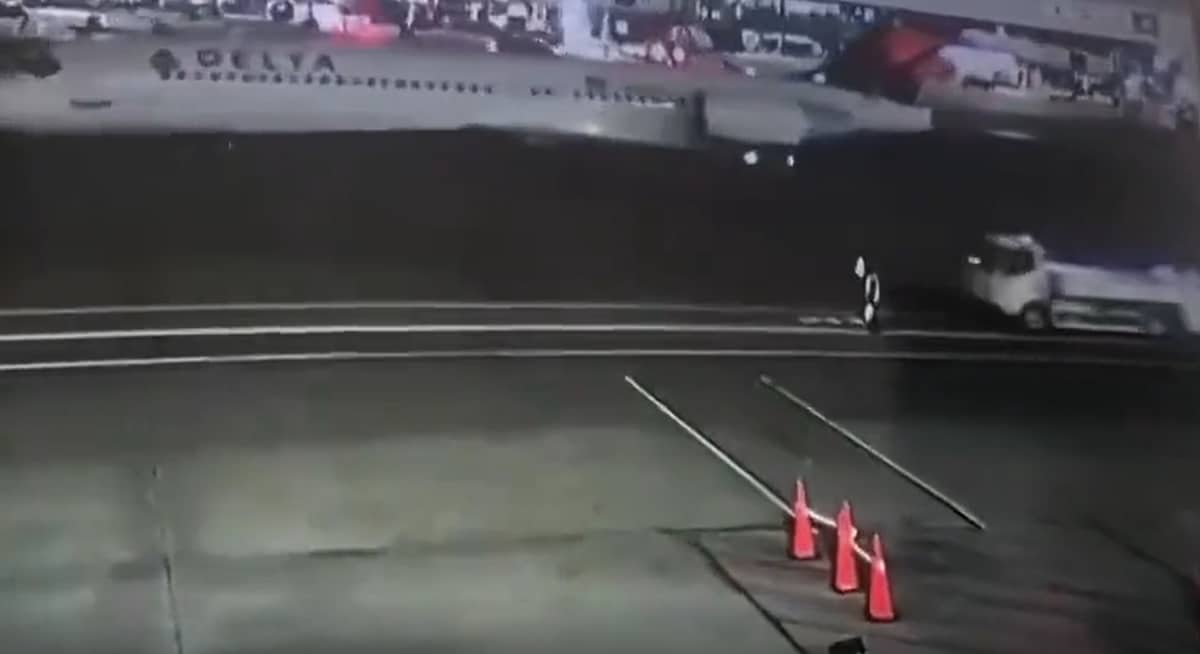 He followed up with a clearer video, which was obviously recorded by security cameras as you can see at the bottom of the computer: “C36 Jetbridge Service.” Jon tagged Atlanta Airport news.

WARNING: The video below is disturbing.

Followers were quick to comment, including Jamie Larounis, a travel industry analyst, who wrote what I was wondering: “What is that that was hit?” Jon replied: “looks like a person to me.”

It appears a ramp worker directing a Delta plane to the gate was standing with their back to the truck when it came cruising in and ran them over. It’s clear the driver did not see the person but quickly stopped after impact and other ramp workers ran to help.

In the video, there’s an announcement from who I’m guessing is a supervisor, saying: “Attention lav techs, lav techs, please watch your speed out on the ramp.”

After a quick search for lav tech, I found a job listing that states: “The Lavatory and Water Service Agent is responsible for servicing various aircraft lavatory and water systems.”

The driver was no doubt speeding and the poor ramp agent was completely blindsided. There’s been no mention of the incident on the news or the internet with the exception of Jon’s tweet.

Jon, wrote: “It looks like that delta 717 was about to pull into the gate. The clerk is marshaling them in”

I asked Jon where he got the video and commented that it’s shocking there’s no news about it. He replied with: “I’m quite surprised about that myself, although I’d tend to imagine only a couple more hours before it gets out more widely now that I’ve tweeted it. Like so many things, was sent to me anonymously from what seems to be a burner twitter account.”

Jon thinks it happened last night but you would think that news media would have broken the story if it was 24 hours ago. One of Jon’s many followers commented: “This is so weird. I was sitting in the sky club D concourse last night and saw ambulances at c gates last night and wondered what happened. We all decided it was Pax medical. But I bet this was it.” Jon replied to her with: “I bet that it was! Mystery solved– at least potentially. I cannot imagine this video is more than a day old (just based on my assuming it would be out there more.)”

Since nothing has been confirmed, this is a developing story. I will update it as soon as I hear details. Let’s just hope the poor ramp worker is going to be okay. I don’t know how that’s possible but I’m praying for them.

UPDATE: It looks like this story might have a Christmas miracle ending. According to @pbarbee: “A Delta buddy of mine told me she (amazingly) wasn’t killed, just a little banged up.”

UPDATE 2: According to a GoFundMe created by the victims mother, we know a lot more about what happened and when. “On Saturday, December 10 around 6PM, my daughter and second born was safely flagging an airplane in while working as a ramp agent for Delta Airlines at the Hartsfield-Jackson Atlanta International Airport. She was good at her job and did absolutely nothing to deserve this! Oblivious to the fact that her life would be forever changed in just seconds, Camdyn was suddenly and viciously struck from behind and plowed over by a lavatory waste truck. Despite being visible to airplanes in the sky, her orange vest and wands were somehow not visible to the careless driver. Believed to be dead and without breath, she regained consciousness and was rushed to Grady Hospital in Atlanta. Thank you, God, for sending my baby back to us. I now ask the community for your gracious support as we prepare for a lengthy recovery process. Thankfully, her spine was left intact, but Camdyn suffered many broken bones in her face, a fractured skull and a serious concussion. She has had difficulty finding her words and remembering things since the incident. We pray for a full recovery, but know that it will be a long one that will require much love, attention and support.”

UPDATE 3: The local news did an interview with the victim’s uncle which you can watch below:

4 Comments On "UPDATED: Delta Air Lines Ramp Worker Gets Run Over by Airport Vehicle at ATL"