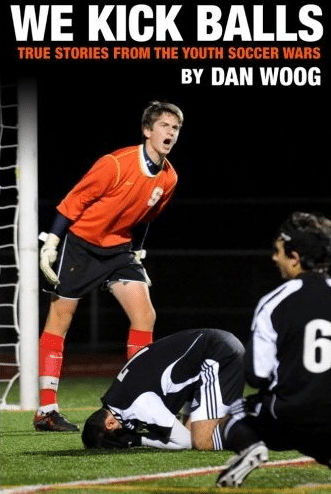 Dan Woog is a writer, award-winning soccer coach (and former Johnny Jet newsletter editor). His new book – We Kick Balls: True Stories from the Youth Soccer Wars – takes readers on a journey from Europe to Brazil to Australia, chronicling his more than 30 years as a youth and high school soccer coach.

According to Amazon’s book description: “He’s met incredible young athletes, forged lifelong bonds, and had them tested by too many deaths. He’s learned what makes teenagers tick. He’s learned a lot about life. And he’s learned even more about himself.”

The below excerpt from the book describes a trip near – and finally into – Barcelona. (We Kick Balls

is now available on Amazon.)

Barcelona came at the end of a long but delightful trip. We had a great home stay in Germany. We won the Italy Cup in the funky seaside resort city of Rimini.

Now we were staying on a college campus an hour north of Barcelona. Four boys shared suites, each with its own living room and kitchenette. But a college outside of Barcelona is not Barcelona. They were teenagers. They knew what lay beyond their kitchenettes.

On our second to last night in Spain, they pleaded their case. The soccer part of the journey was over; there was nothing to rest up for. Pleasepleaseplease couldn’t they have one night in Barcelona?

There was one small problem. The last train back stopped running at midnight – precisely the time the clubs flung open their doors. The next train – the first of the morning – left at 5 a.m. They promised to be on that one. They absolutely, positively would stay out no later than 5.

There was a time when I would have joined them in Barcelona, but that was back in the 20th century. I had stayed up late for two weeks, and we had a 4 a.m. departure the morning after next. I was not about to wait up all night for them. At the same time, it would have been unfair to prevent them from creating one final night of stories to bring home to their friends simply because I wanted some shuteye.

Against my better judgment, I agreed to their all-night trip to Barcelona. However, I set certain conditions. One was that they all carry train, city and area maps. The second was that they slip a note with their names under my door when they returned, so when I awoke I would not worry. And they always had to be with someone; there would be no going off alone.

The third condition was, of course, impossible to verify. For all I know they split up the instant they walked to the train station.

The first condition was met – sort of. Groups of boys entered my suite, earnestly pulled out their maps and demonstrated a passing knowledge of map-reading. Not until an hour or so after they left did I discover most of their maps still on my kitchen table.

At 2:30 a.m., my phone rang. It was the mother of a player. She needed to talk with him, to iron out details about getting home from the airport.

“Where is he?” she asked, logically enough.

“Well….they’re in Barcelona,” I said.

There was a pause.

“What time is it over there?”  I calculated quickly. It was 8:30 p.m. back in Connecticut.

There was another pause, far longer than the first. I held my breath.

Finally she spoke. “Wow!” she said in a voice far kinder than I had any right to expect. “I wish you were my mommy!”

0 Comments On "Excerpt from Dan Woog's "We Kick Balls""