A Short Guide to Experiencing Cherry Blossoms in Japan

Kelley is an award-winning TV personality, experienced travel journalist & social media influencer. Obsessed with world travel (and Indiana Jones) since childhood, she parlayed that passion into her career, starting at 19 as a National Geographic intern. She went on to be the Director of Tripfilms.com, and now she is the producer & host of several web series, which feature hotels, tours and destinations across the globe. Her shows focus on the local experience, the world’s best hotels and the best in every destination. Join her on her jetsetting adventures via Kelley Ferro’s YouTube channel, or her Instagram.

What makes pink flowering trees a travel phenomenon? I wasn’t sure I understood the cherry blossom frenzy that takes hold of Japan, D.C., and many other locations around the world, come spring. As I boarded my bullet train in Japan, headed north to Hirosaki Castle for this April festival, I was a little skeptical. I was traveling with a production team from CNN and our first stop was cherry blossoms. They were going to capture my reactions to the blooms and I was concerned I’d be underwhelmed. I just didn’t understand what made Japan’s cherry blossoms so special. Flowers are undeniably one of nature’s most attractive creations, but did I really need to see them in person? I soon found out the answer was yes.

There is so much to this Japanese cherry blossoms custom. Cherry blossom season attracts almost over three million visitors each year, and that number is rising annually. There are over 200 varieties of flower (shape, color and petals), but the most popular is somei yoshino, which has almost all white petals except for a hint of pink. All cherry blossom trees only bloom for a week or two, depending on the climate of their specific region. Hanami, Japanese for “cherry blossom viewing,” starts in the southern regions of Okinawa and gradually moves north as the season warms up, reaching Hokkaido around May. The entire season spans from late March to May, with festivals, parties, tours, and an influx of petal peepers from far and wide. 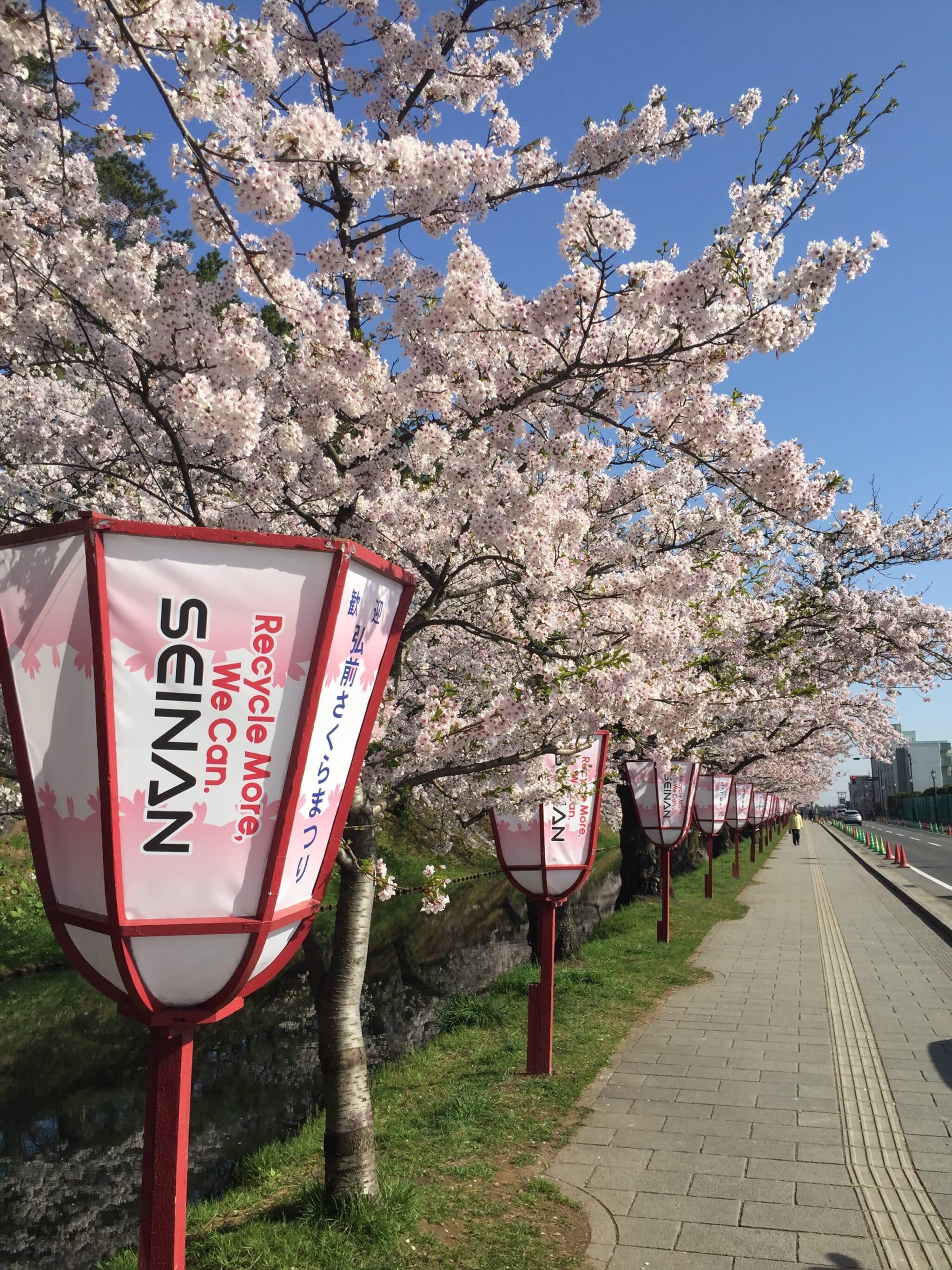 The tradition of viewing cherry blossoms is believed to have started in the Nara period (700s A.D.) as a way to celebrate the upcoming rice planting season. This custom gained popularity among emperors and royalty in the following Edo period, and they would celebrate with feasts and festivals under the sakura, or cherry trees. Soon, the common people adopted the tradition, having picnics and sake under the trees. By the early 1600s, the hanami was widespread across Japan.

Today, hanami is as popular as ever. There are full tours offering experiences at the best viewing sites and festivals in Japan (more on the best cherry blossom tours below). Though the sakura bloom throughout the country, there are certain areas known for their particular beauty as well as notable festivals, like:

But all this for a flower? Besides being lovely to behold, cherry blossoms only bloom for a very short window—around one to two weeks. This taps into the very Japanese appreciation for the fleeting beauty of nature. These blossoms are special because they are temporary and represent a new beginning. The falling petals have widely been referenced in Japanese poetry, songs and literature. They embody the nation’s cultural beliefs as well as history, which is in turn why they are celebrated.

Cherry blossoms at the Sakura-Matsuri festival in Aomori

We visited Aomori, a small town in the countryside of Tohoku that is home to Hirosaki Castle and the popular Sakura-Matsuri festival previously mentioned. This region is known for farming with the primary crop being apples. The locals are skilled at pruning apple trees to bear fruit year after year, and they have applied these skills to the cherry trees. Their techniques led to blossoms that produce five to seven floral buds, instead of the usual three to four. This increase in weight causes the branches to hang lower and the visual to be more dramatic. Starting with trees over 300 years ago, the area has since flourished and it was an obvious choice for our video shoot.

Hirosaki Castle is one of the highlights of this region not only for its cherry blossoms, but for its incredible architecture, historical significance and detail in landscaping. The park includes arched bridges, moats, shrines, carefully laid-out paths between the trees, and a front row view of Mount Iwaki. Its 150 acres include boat rental options and prime picnic spots. As we visited in late April, we hit it at its pinnacle—the height of cherry blossom season.

My first thought was that the blossoms looked like snow! Every branch was covered in snowy pink petals—so many that they resembled a thick layer of wintery powder. The ground was covered with fallen petals and there was a quiet to the park that reminded me of the softness just after snowfall. Intense pink hues ranged to almost white; it was a multifaceted sea of petals, in every direction. It was a magical labyrinth of quiet, sweet smelling blooms.

The cherry blossoms are the literal cherry on top of this exquisitely laid out park. As we walked down the entrance path, there was a multitude of other paths that I could take. I could cross over bridges, stroll along twinkling brooks or snake into a dense patch of blossomed trees. Each way we went, I felt completely surrounded by this world of flowers. Birds chirped in delight as the admiring people below spoke in soft tones. Clicks of the camera were among the only human sounds. Photos, video and words help to paint a portrait of the experience, but I have to admit it is best experienced first-hand.

We took photos, shot video and even talked to a group of giggling Japanese school children on a field trip. I saw young couples picnicking as well as multigenerational families spreading out blankets for their hanami. I realized that this ancient and temporary scene was a microcosm of the Japanese belief system and reverence for nature. The cherry blossom is a delicate flower, but combined with thousands of others, it has a tremendous impact. The act of admiring cherry blossoms is very simple, but it is only for a moment and that is why it is savored. 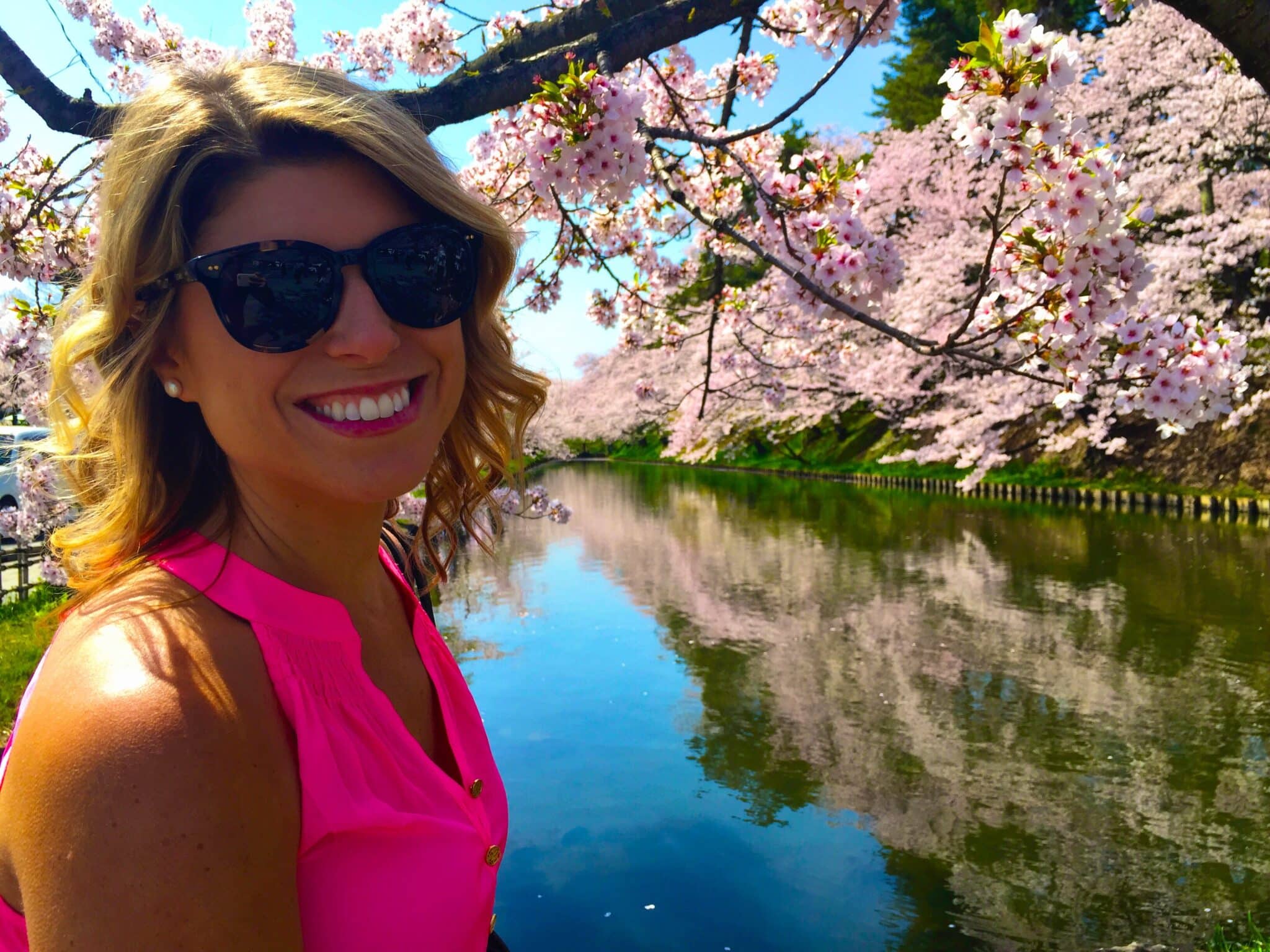 I left the park that day feeling very different about Japan’s hanami. I could see why it is a worldwide phenomenon, with another epicenter of cherry blossoms in my own country’s capital city. My first experience with the cherry blossoms has made me want to return so I decided to find out the best ways to do. Here is my guide to experiencing cherry blossoms for yourself.

A quick guide to experiencing cherry blossoms in Japan

When to visit: Spring (April-May)

Best itinerary
Though it is possible to do a cherry blossom trip on your own, if you want to see multiple sites and get more out of the trip, I’d suggest a tour. It is much easier to navigate in these rural areas that off the English speaking tourist path when you have a guide. Though Japanese people tend to be helpful if you need directions, a tour will really help you understand the intricacies. I always like to ask questions and hear more background about each location. You can research itineraries based on locations, length of time and other included experiences.

My recommendation for a tour group is the “Signature: classic Japan- Cherry Blossom Tour” offered by All Japan Tours, as it has glowing reviews from previous passengers. The tour takes 24 passengers to a variety of locations in Japan, starting off in Tokyo and stopping in Kyoto, Osaka and several more cities during the 14-day trip. On the cherry blossom trail, they hit a lot of the major sites including Matsumoto Castle, Himeji Castle and Ueno Park. In addition to the cherry blossoms, they offer cultural experiences along the way, like green tea ceremonies, calligraphy lessons, origami experiences, and even the floating temples of Miyajima Island. You can find more details on their itinerary here.

For more on seeing cherry blossoms with by All Japan Tours, see my tour here.