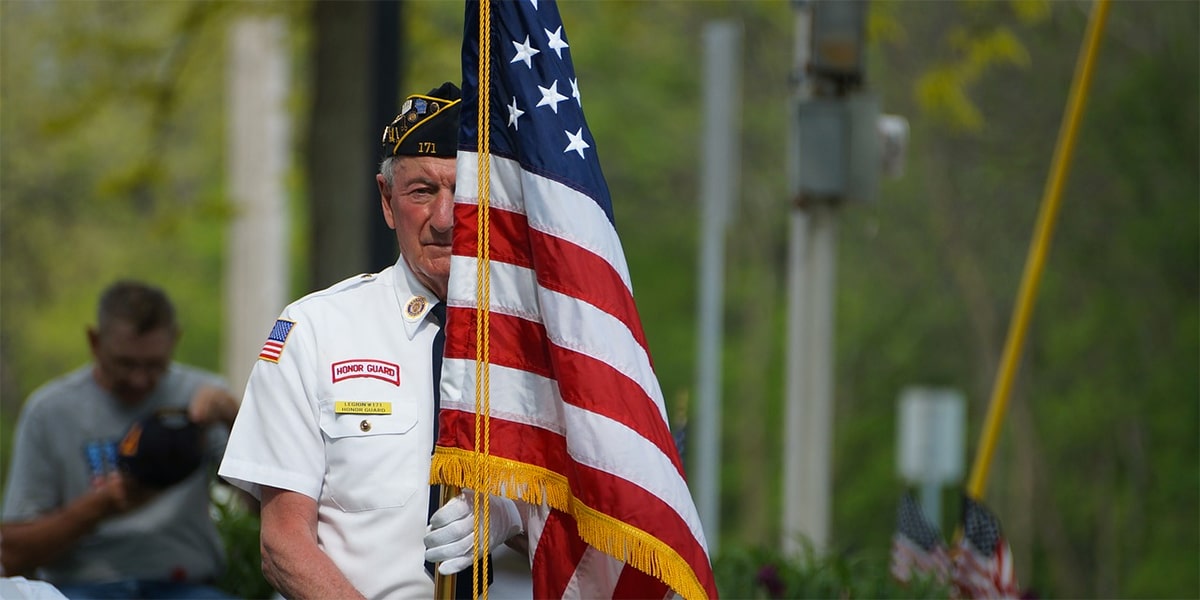 I can’t believe it’s been eight years since I flew home from Atlanta to Los Angeles on Delta with a fallen soldier on my flight. It was the most emotional flight of my life. You can read the story I wrote about my experience eight years ago here.

I wasn’t supposed to be on that flight. I was scheduled to fly a day earlier but I wasn’t feeling well so I postponed until the following day. Because of that, I didn’t get upgraded and I was stuck in a window seat. I almost always choose an aisle seat when in economy but everything happens for a reason. About 40 minutes prior to landing, the airline crew announced that there was a fallen soldier on the plane. Everyone stopped talking and you could only hear the roar of the engines. Because I was back there and in the window, I was able to witness something that changed me forever.

When I arrived home late that night, I was so tired and drained but I just had to write down what I had seen and experienced. I sat down at my laptop and wrote the story through my tears. That’s how emotional the whole experience was. I sent my story to my wife who was in Toronto so she could edit it (it’s nice to have a spouse that’s an editor) and she called me right away to say that my story was amazing. The best I’d ever written, she said.

I posted it on my website and shared it on social media. Next thing you know, the story went viral. My story was shared tens of thousands of times on Facebook. The video garnered millions of views. Yahoo called and asked if they could run it on their website because one of their writers was on the same flight and said that I perfectly captured the moment and how it felt to those on board.

I then flew up to Oakland to host a Twitter chat and meet my wife and I had producers and news stations calling and asking me to be on their shows. I woke up at the crack of dawn to be on CNN, CBS, FOX News and more. Even a crazy number of small affiliates ran their own stories about the piece.

I had friends I haven’t heard from in years calling me up because they’d seen my story. A producer from The Ellen Show asked if they could use my video and I received a hand-written thank you note from Chuck Hagel, the Secretary of Defense.

But despite all of that, the true highlight of the entire experience came in the form of a comment left on Yahoo. The comment, left by reader Indiana Joan, was liked thousands of times and makes me cry every time I read it. She wrote: “My brother spent his last day on earth, ironically on his 21st birthday in Vietnam. He wanted to serve his country proudly, just as this young man did. I am so grateful for this story. You see, my brother never received this kind of reverence. But when the passengers appreciate that one soldier for serving his country by giving his life, that soldier represented every soldier that leaves his life on the battlefield. My brother has finally received the honor through that young man who came home in a draped box with the colors of our pride, the Red, White, and Blue.”

Another wonderful comment was this one below, from the Los Angeles Fire Department (LAFD). Brian Humphrey reminds us that our freedom is not free. 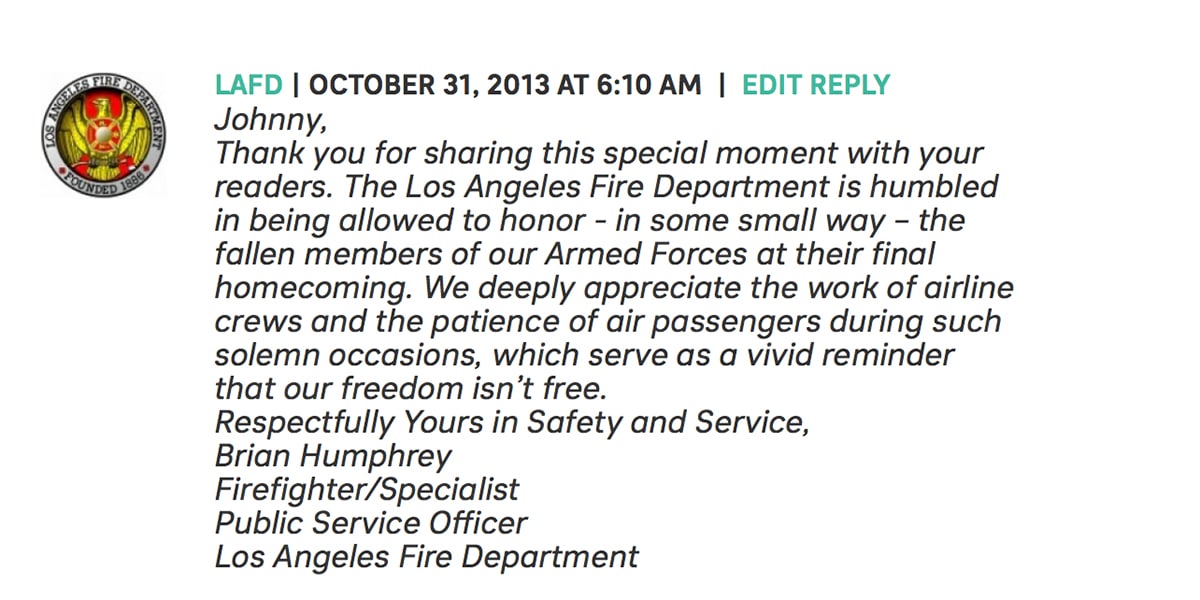 There was another fallen soldier on an American Airlines flight I took from Honolulu to Los Angeles last year. I didn’t write a whole post but I did write about it in my weekly newsletter, which can be found here.

The reason why I’m bringing up these special flights is not just because Veterans Day is today but also because recently, NPR ran a story entitled ‘This Is My Way Of Serving.’ How An Airline Worker Honors Fallen Military Members.

It’s the backstory of Brian McConnell, who “holds a job that many of us might not have even realized existed. He runs the Delta Honor Guard, a volunteer group with Delta Airlines started at Atlanta’s Hartsfield–Jackson Atlanta International Airport, that greets every plane that carries the remains of a fallen military member.”

You can read or listen to the three-minute story of him telling his wife what it’s like to serve on these special flights. These incredible airline workers are so important and special and it’s a shame that they don’t get more credit for the important work they do. Today is an important day to honor our veterans and those currently in service but every day, we should remember them and those, like the honor guards, who bring such dignity to our fallen military. Thank you, from the bottom of my heart.