One last Star Wars Weekend left: Tips on how to have the most fun

When I arrived, I was but a learner, now I am the master: How to have the most fun at Disney’s Star Wars Weekend

Not since the Star War Convention in Los Angeles had I felt the same excitement – the force indeed was strong at Disney Hollywood Studios this past weekend. Being a big Star War fan I wanted to do it all and I wanted to do it in style.  Meeting characters, getting autographs, seeing all the special shows, watch the parade and take tons of pictures required some planning.  Clearly, my regular Minnie Mouse ears or even my favorite tiara were not going to cut it.  So I decided it was time to check out what was left in the costume chest. After trying out a Jedi costume, and a Queen Amidala robe the Merida in me settled for the more practical Princess Lea outfit. Once a Princess, Always a Princess.

Park ticket in hand I was at the main entrance 45 minutes before the official opening time and headed over to the celebrity autograph FASTPASS area where I joined the long line of fans hoping to snatch a ticket to meet their favorite celeb. Unfortunately the ‘golden tickets’ are very limited and run out by the time the park opens. Diehard fans actually campout in the early morning hours to be first in line when the FASTPASS distribution starts at 6:30 AM. On the first day I got a ticket to meet with Dee Bradley Baker, the voice of Clone Captain Rex and Clone Commander Cody from Stars Wars: The Clone Wars.

On day two I got to meet with Ashley Eckstein, a Floridian whose father worked for Disney and who has been in the parks since she was 5 years old. Ashley, the voice behind Ahsoka Tano loves the event and told me that coming to Star Wars Weekend is her favorite event of the year. She actually started her carrier in entertainment as a dancer in the Hollywood Studios afternoon parade.

Most visitors however do not come to the event to grab a celebrity autograph. Like me they love to interact with Star Wars characters and I was relieved to see that I was not the only fan dressing up for the occasion, after all Mickey dresses up as a Jedi and Minnie’s attire looked a lot like mine. Meet and greet spots are set up in seven different locations throughout the park and so I set out to meet everybody’s favorite Wookiee, Princess Amidala, Princess Leia, Luke Skywalker and of course the bad guys Darth Maul and Darth Vader. Some characters share a meet and greet spot so always inquire whom you will be meeting prior to standing in line.

This is especially important as it will be difficult to explain to your kids why all those in front of you have met Jedi Mickey and why they will meet with Stormtrooper Donald instead. Cantina Band members, Stromtroopers and even Tusken Raiders are wandering the park throughout the day and interact with guests without standing in line.

Shows revealing the fascinating world of voice acting, special effects and the life and movie-making adventures of Star Wars celebrities are center stage at the Premiere Theater. Kids ages four to 11 can participate in a trivia game held twice daily at the main event stage under the Sorcerers Hat. Sign up for this “Padawan Mind Challenge” starts at park opening in front of the ABC Sound Studio. Another fun activity for kids is the Jedi Training Academy; a show held numerous times during the day next to the Star Tours The Adventures Continue ride. If train you must, sign up at the Epic Theater as you enter the park.

For me the 11 AM “Legends of the Force” Motorcade and Celebrity Welcome is the highlight of the day. All Star Wars characters are out in full force as they, together with the Florida Garrison of the 501st Legion, march from the park entrance to the main event stage. If like me you want to take lots of pictures you must claim a good unobstructed viewing point up to one hour before the parade. And as hundreds of characters, celebrities in vintage cars and a large group of younglings accompanied by a Jedi Master and lead by R2D2 march on Hollywood Boulevard I am transported to a galaxy far far away.

Darth’s Mall, in the courtyard behind the Rock ‘n’ Roller Coaster Starring Aerosmith, is Nirvana to all Star Wars fans looking for themed merchandise, specialty drinks, Darth Vader cupcakes, the D-Tech Me experience and much more. I did not get my likeness on a three-dimensional figurine nor did I have my image cast in Carbonite but I could not resist the Lightsaber umbrella, which undoubtedly will create for some delay upon passing security when I get back home. Inside the mall is the 17-foot-long rancor pet of Jabba the Hut, lovingly made by a fan, a great picture opportunity. The mall also has a character meet and greet where in a separate line one can meet Luke Skywalker, Princess Leia and R2D2 joined by C-3PO. The line is long at all times and I will have to return next weekend to get my picture taken with the droids. 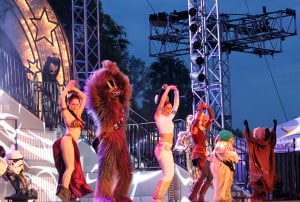 The last big event of the day is a hoot. At 8 PM Hyperspace Hoopla! gets under way at the Sorcerers Hat. It is a must see show and again if you want great pictures the only way to get a front stage spot is to be there an hour prior to the show. It is actually the perfect time to finally have that Darth Vader cupcake!

There is one more Star Wars Weekend  being held June 7 – 9, go check it out and May the Force be with you!

Where to stay:
Disney’s Yacht Club together with its sister property the Beach Club is located in walking distance from the park and has a breezy Nantucket and Cape Cod atmosphere. Prices start at $394 & tax and resort fees per room, per night.

Guests staying at the mid-priced Caribbean Beach Resort get to The Studios by Disney bus transportation. Room prices at the Mexican themed resort start at $191.25 & tax for a standard room per night.

The Disney value accommodation resort Pop Century is located near Disney’s Hollywood Studios on Victory Way near the ESPN Wide World of Sports Complex. In terms of layout it is almost a clone of the All-Star Resorts. Decorative touches make the difference as Pop Century draws its icons from decades of the 20th century. Bus transportation connects the resort to The Studios and prices start at $112.50 & tax for a standard room per night. 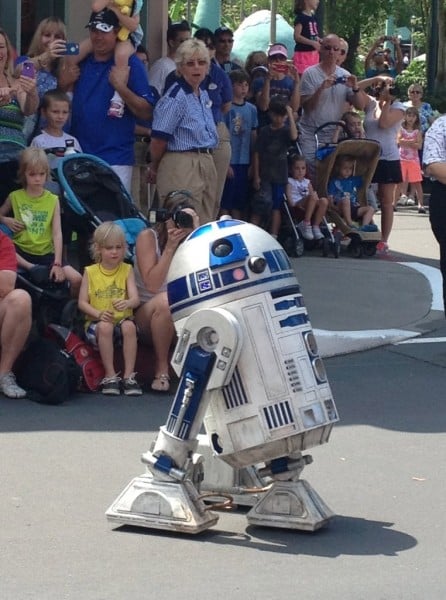 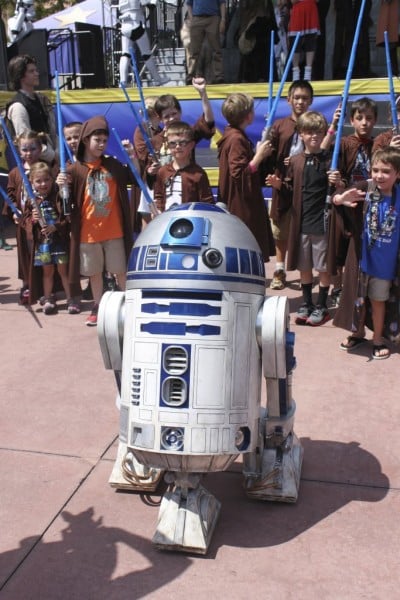 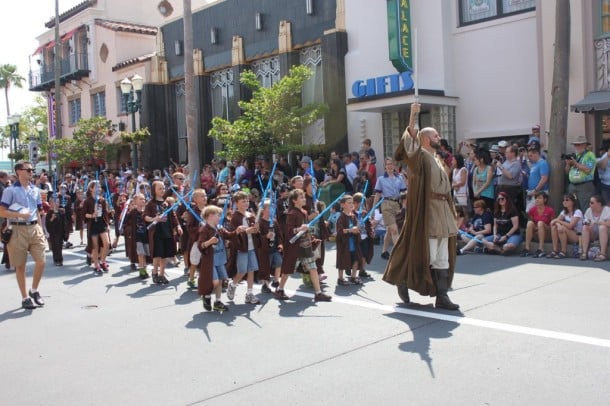 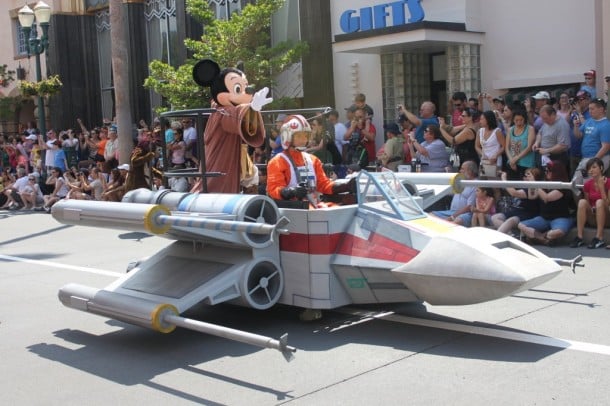 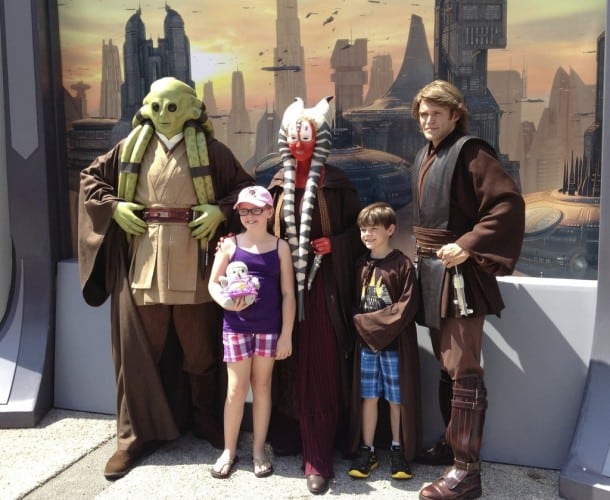 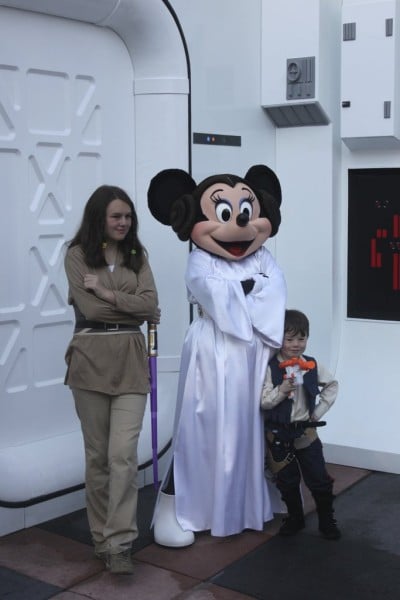 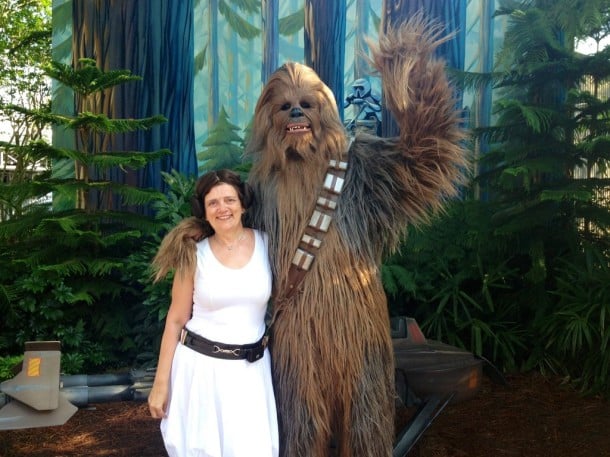 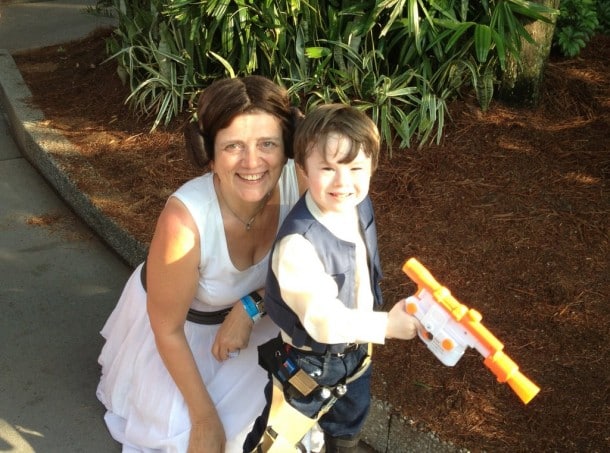 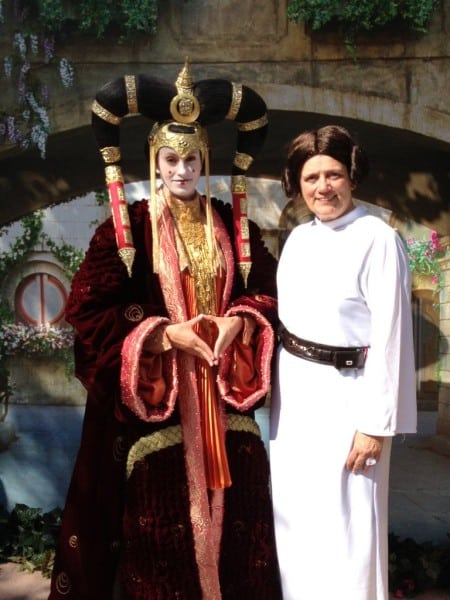 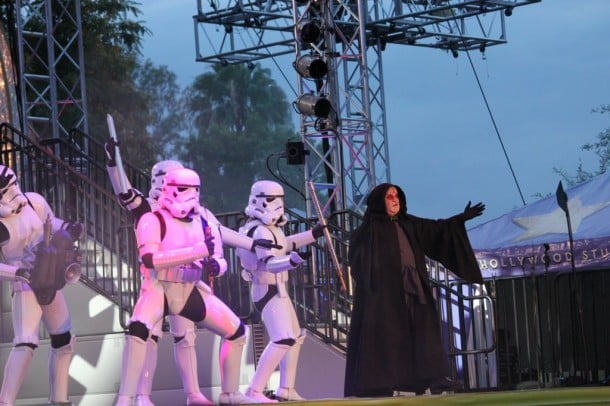 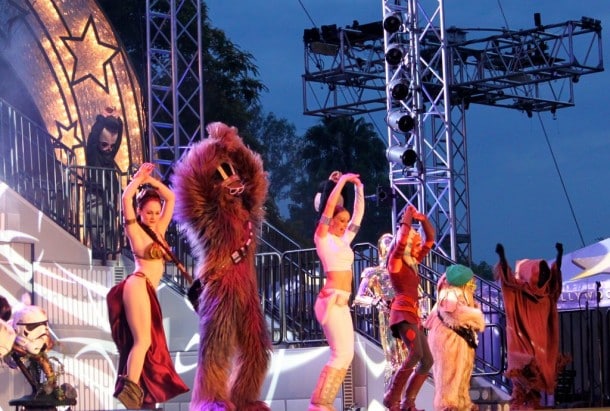 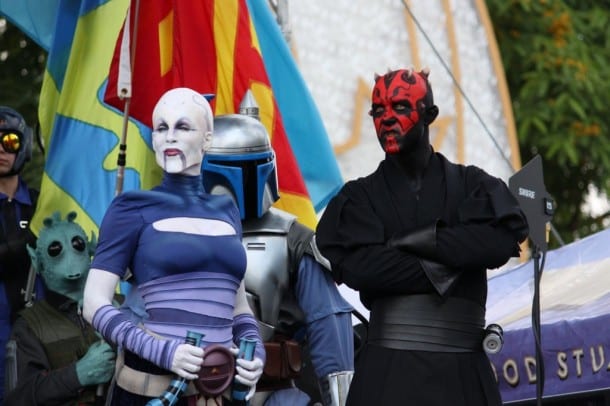 Darth Maul and A. Ventress during welcome 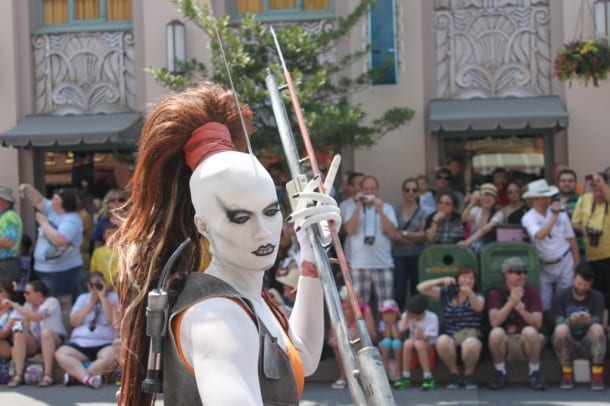 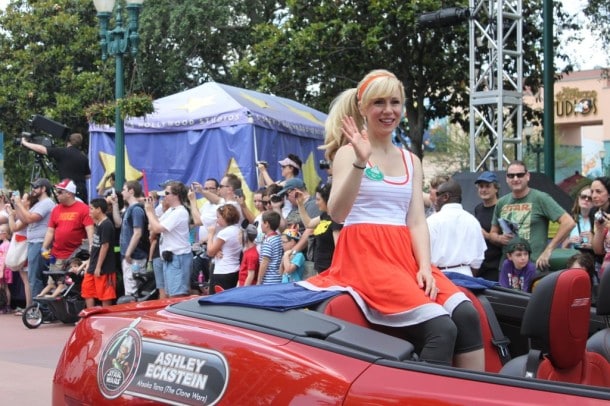 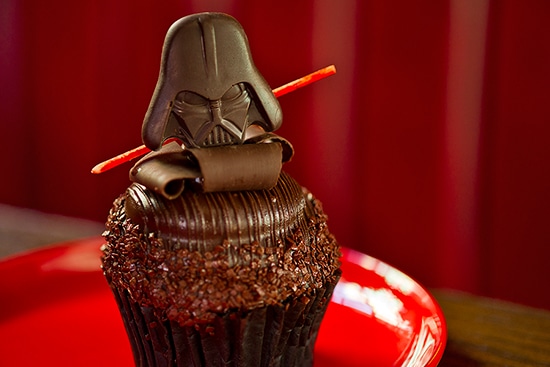 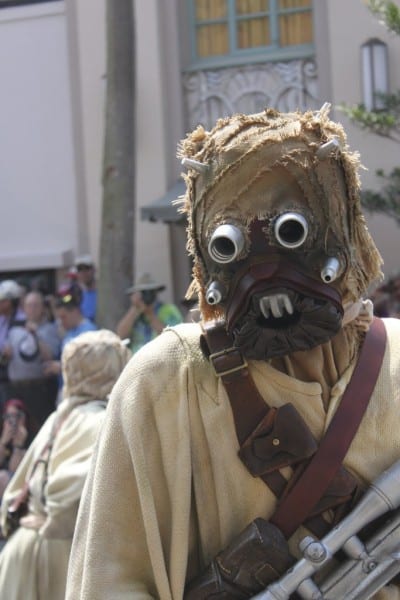 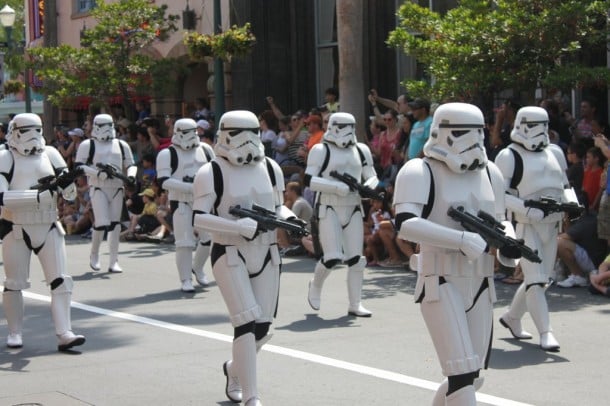 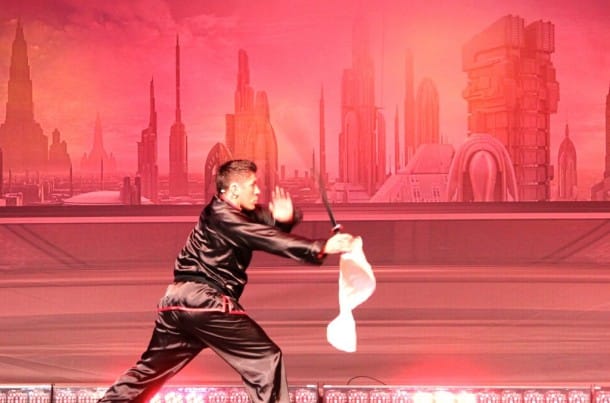 0 Comments On "One last Star Wars Weekend left: Tips on how to have the most fun"