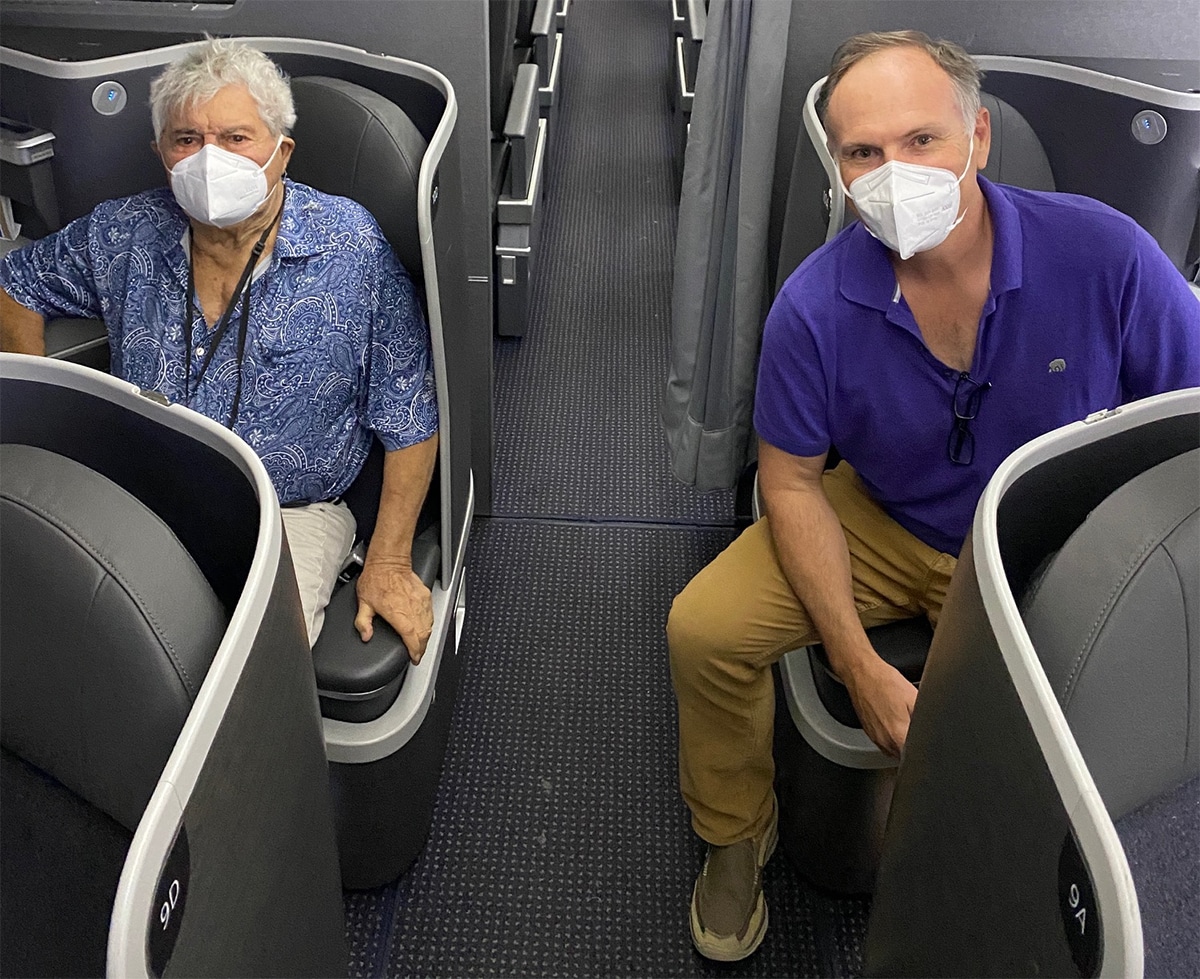 Yesterday, as I was getting ready to depart my dad’s senior home in South Florida for Miami International Airport, so I could bring him to back to California to see his grandkids for the first time in a year and a half, I saw the breaking news on TV. Per CNN: “If you are fully vaccinated, you can start doing the things that you had stopped doing because of the pandemic,” Dr. Rochelle Walensky, the director of the US Centers for Disease Control and Prevention (CDC) said Thursday, adding: “We have all longed for this moment when we can get back to some sense of normalcy.”

On Thursday, she went on to tell NPR, “Right now, we still have the requirement to wear masks when you travel on buses, trains and other forms of public transportation, as well as airports and stations.” The CDC will continue to update its guidance as the science emerges, she added. The CDC requires that masks be worn by travelers on all planes, buses, trains and other forms of public transportation traveling into, within or out of the United States and in U.S. transportation hubs such as airports and stations.

Personally, I think that if cases continue to fall and vaccination numbers rise, then airlines will end the mask mandate before September. However, I wouldn’t be surprised if they start it back up in the fall in fear of a surge in COVID-19 combined with flu season. I would be all for it.

RELATED: The 7 Dirtiest Things on an Airplane

During the five-hour and 11-minute American Airlines (AA) flight, I got to talking with one of the friendly flight attendants. I asked her if she’d seen the breaking news about the mask mandate. She said she had and that it’s going to make her job even more hectic. Why? Because, she says, passengers who are fully vaccinated will figure it’s safe to travel without a mask and though it may be, with no vaccine passport to prove people are vaccinated, there’s no way to tell who is and who isn’t. Her concern is that unvaccinated people who have been flouting the mask rules since the beginning will have no problem lying. In fact, I know some of these people.

If you’re flying or traveling on any mode of transportation for that matter, with the exception of a private car, don’t expect the mask rules to ease any time soon. I learned that on American, if they have to keep telling a passenger to wear their mask, after the third time, they’re required to report them. That’s when the airline will review the case and most likely ban them. If the passenger is abusive, then they will most likely be arrested and fined by the FAA, as two passengers were this past week.

Per the New York Times, “One of the passengers, a woman who was traveling from the Dominican Republic on a JetBlue flight bound for New York on Feb. 7, refused to comply with instructions to wear a mask aboard the plane, hurled an empty liquor bottle that almost hit another passenger, threw food and shouted obscenities at flight attendants, according to the F.A.A. The woman grabbed the arm of a flight attendant and hurt her arm, and she struck the arm of another flight attendant twice and scratched that crew member’s hand, causing the flight to return to the Dominican Republic, the F.A.A. said last week. It recommended a fine of $32,750 for the woman.”

Fortunately, everyone near us on our flight wore a mask, unlike my seatmate from the LAX-MIA leg of my journey the day before (here’s the story). Because I was with my 92-year-old dad, we boarded first (I’d prefer to board last during COVID-19). We sat in the last row of First Class on a 777-200, which I cashed in 20,000 miles for per ticket. FYI: There are two first class cabins on this aircraft and I tried to get the forward one but those seats were all gone. The reason why is because American and almost every airline using a widebody plane, boards from door two so if you’re in the first cabin, you get to take the exclusive left turn, while everyone else takes a right. That meant we had almost half the plane walk by us so I got a good look at everyone boarding and most wore their masks properly. Only a few had their noses exposed. BTW: Not many people wore face shields, which I was surprised to see.

However, at MIA, that’s a different story. Many people weren’t wearing a mask, many under the guise of drinking or eating, including the young woman sitting in the handicap section talking on the phone and casually sipping her Frappuccino. The wheelchair porter who was escorting my dad asked her to move in Spanish from the corner of the handicap section so my dad could sit there. She slid over two seats and kept yapping. It really bothers me when able people sit in a handicap section especially when someone rolls up in a wheelchair. 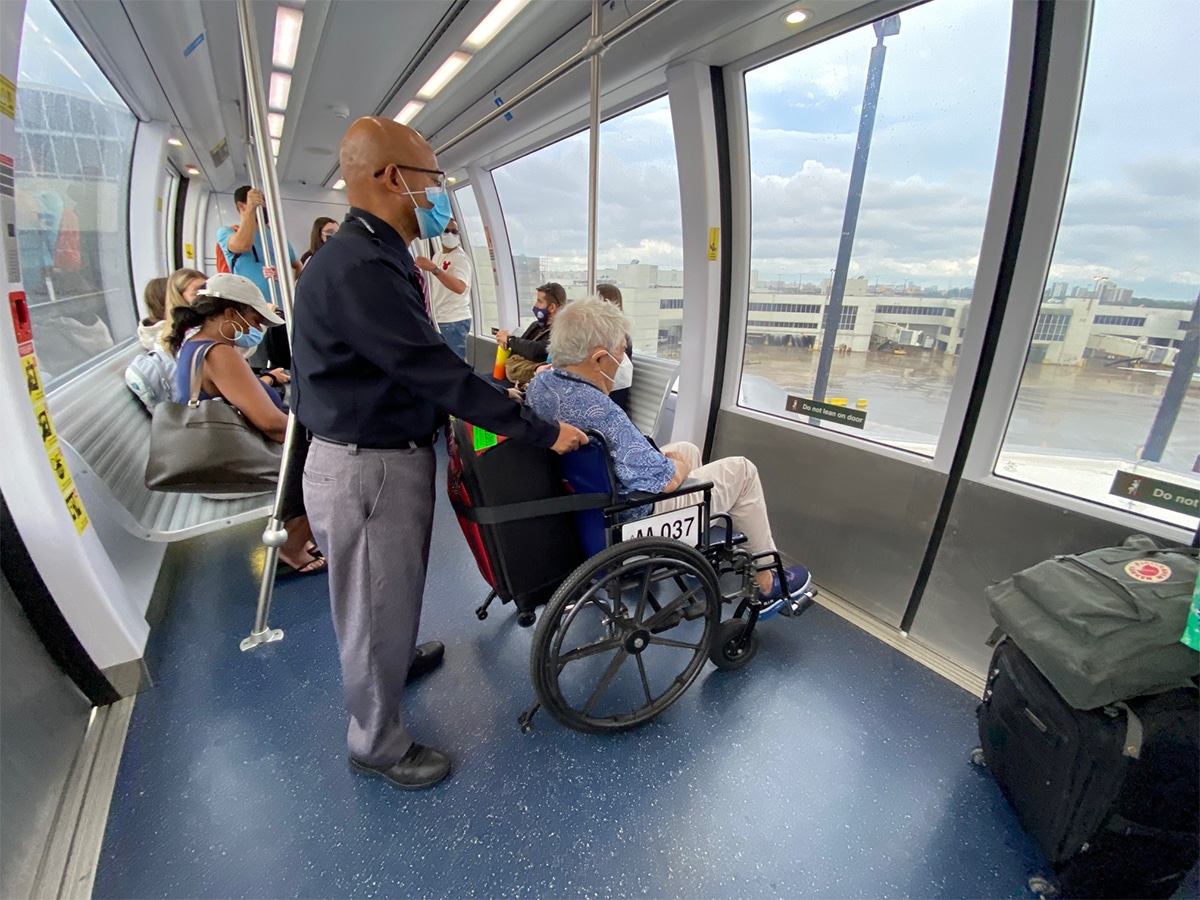 Speaking of wheelchair service: I was impressed this time with American’s service at MIA and LAX, unlike the last time I flew with my dad who is sadly really slowing down. Starting with when I booked our flight. In the past I had to call to request a wheelchair now American allows you to request one online.

When our Blacklane driver pulled in he said you get the wheelchairs from Door 1. However, they must’ve changed it because the AA porter at Door 1 said he could help us but it’s best to go to Door 3. When we pulled up to Door 3, I went inside and took a quick left to the sitting area where all the wheelchair passengers wait.

Last time, we sat there for a good 40 minutes before we could get a porter but this time, I checked in with the agent and when she assigned my dad a porter (the company is called Envoy), a nice man followed me to the curb and I helped my dad into the chair. The porter grabbed his carry-on and strapped it to the back of the chair and we were off. It was 5pm and our flight was at 7pm so I thought we could go to the lounge and check out their offerings (or lack of them) but unfortunately we were flying out of Miami’s old Terminal E, which requires a long walk and a tram. And the Admirals Club Lounge is temporarily closed in that Terminal. So is the lounge at D15 and the Flagship Lounge at D30. Only the Admirals Club is open at D30. Here’s more information on the lounges at MIA.

The best part of Terminal E is that there’s a Café Versailles, which offers solid Cuban food including hot meals, sandwiches and empanadas. I grabbed two ham and cheese empanadas and a side of sweet plantains for a total of $9.

The wheelchair porters drop passengers off at the gate and then they come back when it’s time to board. I didn’t want to leave my dad’s side since he can’t hear well so I didn’t go check out the Admirals or Centurion Lounge in the D Terminal. Instead, I stood next to him (I didn’t want to take a handicap seat).

I gotta tell ya: Miami Airport has some real interesting characters, especially three young women in their early twenties who everyone could hear almost got in a fight near Café Versailles. Then they came strolling through our gate area screaming profanities with their masks off and two little kids (around four) following close behind. I couldn’t keep my mouth shut so I yelled at them to watch their language around little kids. That’s when a rather large, Hispanic woman said, “Those are my kids!” So I said, “What a great role model you are.” She then started calling me a white man and some obscenities but kept walking. When they reached the end of the E Gates, they made their way back, still screaming at the world and at me and anyone who looked at them. Not one MIA or AA employee said a word. It was like they’re used to it.

The ladies obviously couldn’t find what they were looking for, which was either a fight or a Spirit Airlines flight to Riker’s Island.

I told the agent I hoped the weren’t on our flight but he didn’t respond. They weren’t, which is another reason I looked at almost everyone boarding.

FYI: One thing MIA needs to work on is refilling their hand sanitizer stations. They had a lot of them and they were all empty. I almost took video of people’s reaction when they kept trying to clean their hands.

When we landed, all the wheelchair porters were waiting with digital placards, including one for my dad.

Good To Know: Our Blacklane driver in Miami, who is from Cuba, says the best place is Havana Harry’s for Cuban food (food, atmosphere and price all great). He said the famous Versailles restaurant is good food but for older people.