Car insurance rates have been on the rise nationwide, and this has also held true for the state of Illinois. With the recent legalization of marijuana in Illinois, state auto insurance rates are expected to rise once again, based on data from 4 other states that have already enacted marijuana legislation. That said, rates vary widely based on the insurer, city/county, age, driving history, type of vehicle, and even credit score. 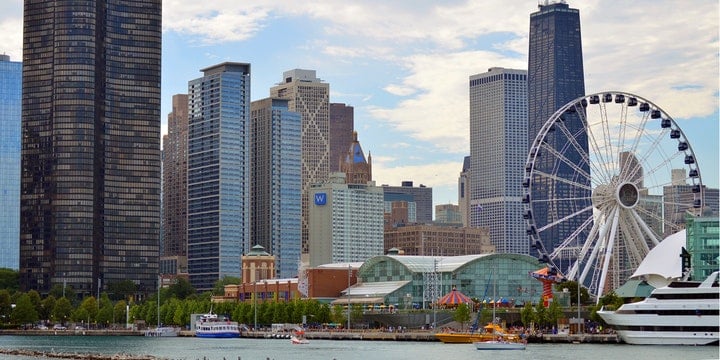 To get a clearer idea of how auto insurance works and how to find the most affordable rates in the state, let’s first take a look at how Illinois laws regulate drivers, their insurance, and their vehicles. Here’s our guide to Illinois auto insurance.

According to the Illinois State Bar Association’s Auto Insurance Guide, drivers must abide by the following regulations:

How Auto Insurance Rates are Determined in Illinois

As of the latest data, good drivers in Illinois pay an average of $1,462 annually for auto insurance or about $122 per month. Rates vary by the insurance provider, location, insurance type, and the level of coverage. However, these rates are also highly dependent on drivers.

When an insurance provider is calculating your rates, they will look at the following factors:

In any case, let’s take a look at some of the lowest auto insurance rates available in the state of Illinois:

It is important to note that the table above shows the average rates for the minimum coverage required by the state of Illinois. For standard or “full coverage,” the rates are significantly higher:

These are approximate rates based on statewide polling for 40-year-old men and women with good driving records. Naturally, individual rates will vary. Additionally, insurers like Country Financial and Farmers Insurance provide low rates for certain areas.

So, in order to get a better picture of Illinois auto insurance rates around the state, let’s look at how rates vary by city.

Aside from your driving history, your location is one of the most important factors when calculating the cost of your auto insurance. Population, crime rates, weather conditions, and cost of living can all affect the amount you pay each year. Individuals who live and work in rural areas typically have the lowest rates.

However, like the people in California (see the best car insurance rates for California if you plan on visiting), the majority of Illinois residents live in urban or suburban areas, where rates tend to increase.

The table below shows the average yearly auto insurance rates for 50 of the most populated cities in Illinois, in alphabetical order. These are approximate rates based on statewide polling for 40-year-old men and women with good driving records. Here is what the data shows:

Now, let’s take a closer look at the top-5 largest cities in Illinois and compare their respective auto insurance rates:

In Chicago, the average annual cost is $1,097 for minimum liability insurance and $1,740 for full auto coverage. However, as with most large cities, these prices can vary by district or neighborhood.

For example, residents of Forest Glen and Lincoln Park will likely pay higher auto insurance premiums than residents of Hyde Park or Washington Heights. Chicago has the 10th worst traffic in major cities in the US. Harsh winter weather only increases the risk of collisions.

As a result, premiums tend to be highest in Illinois’ largest city.

In Aurora, the average annual cost is $776 for minimum liability insurance and $1,365 for full auto coverage. As a suburb of Chicago, Aurora deals with similar weather conditions in the winter months. That said, the cost of living is significantly lower, which helps keep auto insurance relatively low compared to the state average.

Additionally, Aurora does not bring in as much tourism as Chicago, which means that traffic is not as much of an issue.

In Rockford, the average annual cost is $803 for minimum liability insurance and $1,399 for full auto coverage. According to accident report data, Rockford drivers are involved in collisions about once every 10 years, which is on par with the national average. This is a surprising statistic, considering that Rockford gets an average of 30 inches of snow every year.

One factor that keeps premiums low is the high-quality of roads in the city, with only 3% of major roads considered to be in “poor” condition.

In Joliet, the average annual cost is $827 for minimum liability insurance and $1,512 for full auto coverage. Joliet gets quite a bit of precipitation, with an annual average of 34 inches of rainfall and 23 inches of snow. Unfortunately, 67% of roads in the city are rated either “mediocre” or “poor,” which contributes to additional wear-and-tear on vehicles.

So, while traffic is not as bad in Joliet as many other cities in the state, weather and road conditions contribute to higher premiums.

In Naperville, the average annual cost is $736 for minimum liability insurance and $1,292 for full auto coverage. Naperville is another suburb of Chicago that sits between Aurora and Bolingbrook. Despite the high cost of living in this city, auto insurance rates are lower than the state average.

While the city is known for its good drivers, weather conditions, poor road conditions, and heavy traffic are all major concerns.

As you can see, there are a lot of variables that affect the cost of auto insurance in Illinois. Additionally, the figures provided above are averages based on adults with good driving records, so the exact rates you pay may differ.

Nonetheless, we hope that this information helps you when you’re ready to obtain a new policy or upgrade your current one in the state of Illinois.

If you’d like to learn more about acquiring auto insurance in your state, consult some of car insurance guides and resources. Additionally, if you’re looking for more information about Illinois auto insurance, consult the Illinois Department of Insurance today!