Interest in Cuba Travel Down in 2017

After the U.S. eased travel restrictions on Cuba, the Caribbean nation soared to the top of many travel lists (like #2 on NYT‘s 2015 list). People were excited to visit.

Now, however, it appears that excitement is fading. According to a study conducted by Allianz Global Assistance, just 40% of Americans are interested in taking a trip to Cuba. That’s down from 42% in 2016. A separate measure found that 76% of people polled were “unlikely to plan a trip to Cuba”—up 6% from 2016’s number.

Why the drop? The novelty of the new frontier is apparently wearing off, as 9% fewer people (26% of all polled in 2017) cited the eased travel restrictions as a reason to visit Cuba. And when asked about sources of anxiety regarding travel to Cuba, Americans showed that they are thinking less about safety and more about logistics and infrastructure—i.e. the capacity of the country to return a comfortable getaway for their travel dollars. As revealed in the study: 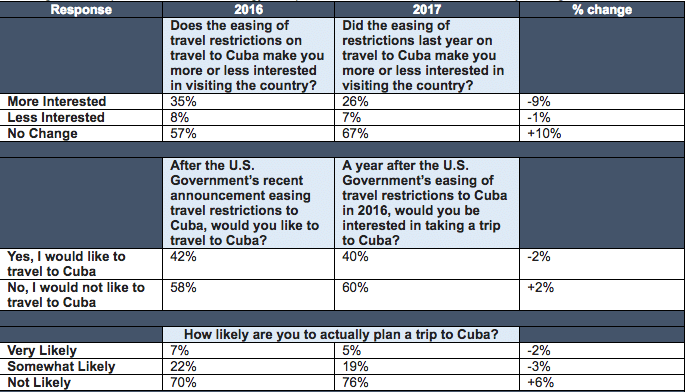 It was also revealed that 15% of Americans believe that a good travel insurance policy would make them more interested in visiting Cuba.

“Our survey found that merely two percent of Americans think they will go to Cuba in the next six months, two percent believe they will make it there by the end of 2017 and 10 percent think they will go sometime in 2018,” said Daniel Durazo, director of communications at Allianz. “Airlines continue to change their services to Cuba, while cruise lines are revving up sailings to the island. It will be interesting to see how this affects visitors’ interest.”