Is Airplane Air Really Cleaner Than the Air Inside Your House? TSA numbers jumped this past week and surprisingly again yesterday, when 950,024 people passed through security checkpoints in the U.S. It looks like they might break one million tomorrow or Sunday for the first time since March 16. Is it because people are seeing studies that suggest the air on airplanes is cleaner than the air inside your own house?

I was on a call with Boeing executives back in June for their Boeing Confident Travel Initiative Briefing. One of their main focus points was how clean the air is on their jets. If you click this link and scroll down to the second point, Airplane Cabin Environment, and click the third tab over, Airplane Cabin Environment (see screenshot below), you will see a video and their explanation on how it works. Here’s what they say: 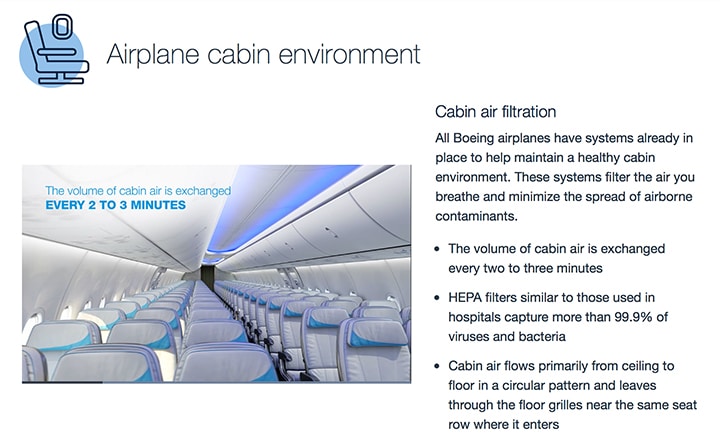 Cabin Air Filtration
-All Boeing airplanes have systems already in place to help maintain a healthy cabin environment. These systems filter the air you breathe and minimize the spread of airborne contaminants.

-The volume of cabin air is exchanged every two to three minutes.

-HEPA filters similar to those used in hospitals capture more than 99.9% of viruses and bacteria.

-Cabin air flows primarily from ceiling to floor in a circular pattern and leaves through the floor grilles near the same seat row where it enters.

RELATED: 12 Tips for Flying During the Pandemic According to TSA Federal Security Directors

U.S. Department of Defense and United Airlines study
Boeing is not the only one trying to communicate this. Yesterday, per Reuters, “the risk of exposure to the coronavirus on flights is very low, a U.S. Department of Defense (USDOD) study released on Thursday found, a positive sign for the airline industry as it tries to rebound from the pandemic’s crushing effect on travel.”

USDOD partnered with United Airlines to conduct the research over six months aboard Boeing 777 and 767 aircrafts. It involved 300 tests during 38 hours of flight time and 45 hours of ground testing. They said that “It was done by releasing particles the same size as the novel coronavirus across the entire cabin by section, each of which had 42 sensors representing other passengers who could potentially come in contact with the particles. Each test released 180 million particles – the number of particles that would be produced by thousands of coughs.”

The study also found that “when a seated passenger is wearing a mask, an average 0.003% of air particles within the breathing zone around a person’s head are infectious, even when every seat is occupied, it found.”

But keep in mind, “the testing assumed only one infected person on the plane and did not simulate the effects of passenger movement around the cabin.”

As CNN points out, “the study, which was released without peer review, did not take into account other ways that people could catch the virus on a plane: by people coughing or breathing directly on them, from surfaces or from confined spaces such as restrooms.”

I too have my doubts about the study, however I do think it’s worth noting that flight crew are not getting sick at an alarming rate. According to this ABC News article, Delta Air Lines CEO Ed Bastian said at the SAP Concur forum, “If the experience of flying was not safe, you’d expect our people to get sick. We track the health of our people. Our people are meaningfully less infected than the general population.”

CNBC Story: How Clean Is Your Flight?
On Thursday, on Shepard Smith’s new CNBC show, he aired a documentary entitled Air Travel in Turmoil. Shepard examined the effect the pandemic has had on the U.S. air travel system, and the millions of people who rely on it. But one of the segments was about how “airlines have gone to great lengths to highlight their cleaning and filtration protocols to regain the confidence of their passengers. Just how clean is your flight?” According to the documentary, thanks to the air filtration process on an airplane, which combines fresh outside air with HEPA filtered air, there’s an exchange of new air inside the cabin every two to four minutes. “The air in a modern aircraft is probably cleaner than the air in your own home,” atmosphere research travel analyst Henry Harteveldt says.

National Geographic’s Take
National Geographic also wrote a detailed story that does a great job explaining how clean the air is on your airplane. It concludes with this: “Turns out the best way to make the skies friendlier right now is to cover up your smile.”

In Conclusion
Obviously, the airlines and travel industry want to get the word out that traveling by airplane is safe. Their (and my) livelihoods depend upon the recovery of the travel industry. I do believe that the air on an airplane is cleaner than inside your house, but I still worry that I could potentially be seated beside or near to someone who’s not wearing a face mask (or not wearing one properly) and that I would catch the virus.

I think airlines have to make sure that everyone wears a face mask without the bogus extended eat and drink exceptions. Just as important, if the airlines test people with accurate and rapid results before they get on the plane (not the current 72 hours in advance nonsense), then we could see close to the levels of the 2.6 million people traveling through TSA checkpoints.

If I had to fly right now, I would either purchase a ticket at the last minute so I could check the flight load and/or fly one of the airlines that are blocking the middle seats.

How about you? Are you comfortable flying on a packed plane?

RELATED READING:
–7 Dirtiest Things on an Airplane According to a Flight Attendant
–How Travelers Can Get Free COVID-19 Testing
–The Best (and Most Incredible Smelling) Hand Sanitizer
–Travel Hack: Always Keep This In Your Toiletry Bag
–Best Face Masks for Flying During COVID-19

2 Comments On "Is Airplane Air Really Cleaner Than the Air Inside Your House?"