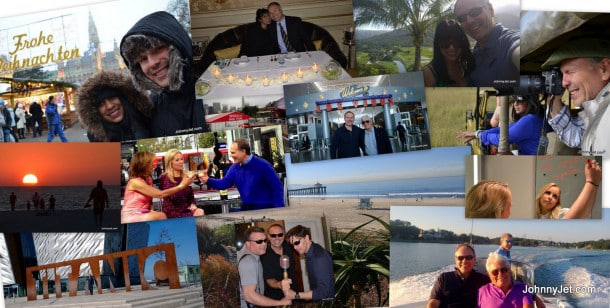 Every year, when I look back at my photo gallery, I pinch myself and shake my head in disbelief. All my travels feel like a dream, especially since I not only used to be afraid to fly but afraid to leave the house. Now, it’s difficult to keep me in my house for more than a week!

I had so many travel highlights this past year that I don’t even know where to begin so I’m highlighting them by the month.

January
I was bouncing back between California, Toronto, New York and Florida. I visited Florida a lot in early 2013 because my dad was living there and broke his back, falling on the beach. My favorite trip, besides spending time with him, was to Marco Island.

February
In February, I was in Las Vegas, Florida and California twice. I was even on the Today Show the same amount of time in three days – here’s one of those segments. Oh, and my favorite trip was probably to the Four Seasons Las Vegas.

March
I was slow to travel internationally in 2013 but I picked up the pace in March when I flew to Berlin via Zurich on SWISS to attend ITB, the world’s largest travel conference. On the way back, I spent a couple of nights in London at the new ME Hotel, where a welcome note was written with lipstick on the bathroom mirror, which was a first!

April
In April, I went back to Europe but this time with my beautiful bride. We spent three nights in Monaco and four nights in Paris at one of the world’s swankiest hotels … The Four Seasons Hotel George V. Another highlight of that trip was having three meals in three countries in one day.

May
My big trip in May was to Memphis to speak at the PRSA conference. It was my first time to Tennessee and I really enjoyed seeing some of Elvis’ hotspots like Sun Studios and Graceland.

June
June was my best travel month. I began the month flying to Southampton, England to attend the naming ceremony for Princess’ Royal Princess ship and the ship’s godmother was The Duchess of Cambridge, Kate Middleton. Then I met Natalie at Heathrow and we flew to Kenya to go on a Micato Safari. It was Natalie’s first time to Africa and my first time in East Africa. Highlights were seeing the Big Five, getting a first look at Richard Branson’s Kenya safari camp Mahali Mzuri and going on a hot air balloon safari in Tanzania.

And if that wasn’t enough, I then flew back to Europe and went on an eight-day Scenic River Cruise down the Danube. Insane!

July
On July 1, I flew to Toronto to celebrate Canada Day with my wife and then drove across the border to celebrate our Independence Day on the Fourth of July a few days later. My big trip was to San Francisco where I got to check out the America’s Cup pavilion.

August
In August, I chilled in California and Connecticut. The only trip Natalie and I took was a road trip to San Diego to attend GBTA and a Yankees game!

September
In September, I lived like a rock star. I flew Los Angeles to London on British Airways’ new A380 and got upgraded to one of their first class suites, then stayed at the Langham London. A few days later, I met my wife in Heathrow and we flew to Belfast so we could spend her birthday week in a country she’s always wanted to visit.

October
In October we traveled by train from Northern Ireland to Ireland and stayed at three swanky hotels. Our favorite was Ballyfin. We flew back to North America on a British Airways 787 – it was my first time on this new aircraft and it was pretty sweet. I later visited Mississippi for the first time to give a speech in south Florida. But my most significant flight in October was flying back to L.A. and learning that there was a fallen soldier on my flight. I went home and wrote a story and posted a short video about this incredibly emotional and moving experience. Both quickly went viral. Pretty much every media outlet picked it up and I did interviews for CNN, FOX, NPR … The video alone had over two million views on YouTube. It was also featured on the homepage of Yahoo and AOL. The response to this story was overwhelming and I was privileged to be among the passengers who escorted a fallen soldier home to his family.

November
I spent most of November on the West Coast. Highlights were going to Oakland and Sausalito to stay at Cavallo Point Lodge. But the real thrill was taking my dad to Las Vegas for his 85th birthday – we stayed at the Aria and he loved it.

December
In early December, my dad and I went back to Las Vegas – this time with Expedia to take part in one of MasterCard’s priceless moments. We got to play golf with a touring PGA pro! Then I flew to Toronto and a day later, Natalie and I flew to London for the night to see her family. The next day, we flew to Germany to board a Viking River ship to go on a Christmas market cruise. I was in four countries in four days and then three more countries the following few days (Austria, Slovakia and Hungary). We had an amazing trip, month and year and we finished it off in style … in Hawaii!

I look at these photos and reread the posts and I shake my head in disbelief. Never in my wildest dreams did I ever think I could turn my passion into my full-time job and I realize that without you readers, I would be nothing and none of this would be possible. So a heartfelt thank you, thank you, thank you for your support. I hope you have an amazing holiday and a happy New Year!

FYI: If you want to stay in the know, I now have two other newsletters in addition to my weekly one. Last year, I launched a Travel Deals newsletter to notify subscribers any time there’s a really good deal like last week’s fare from New York to Europe for $200 one-way (including taxes) and a few months ago, I launched a Daily Travel Tip newsletter. You can sign up to any or all of them here.