KLM is the First to Offer Customer Service Through LinkedIn 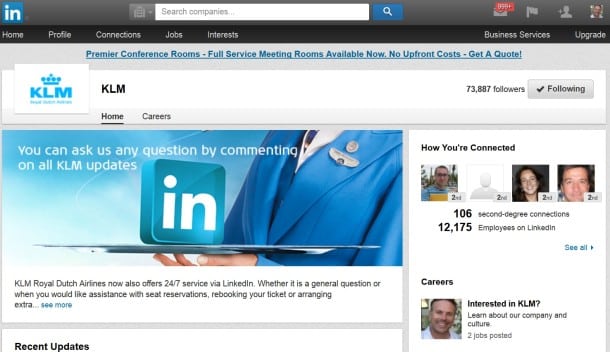 Effective today, KLM Royal Dutch Airlines will offer 24/7 service via LinkedIn. Customers can approach KLM with general and flight-related queries on topics such as seat reservations, rebooking a ticket or making arrangements for extra baggage. KLM is the first in the world offering service via this business-oriented social media platform.

“After Facebook, Twitter and VKontakte, adding service via LinkedIn is in line with KLM’s strategy to be where our customers are,” said Martijn van der Zee, Senior Vice President E-Commerce AIR FRANCE KLM. “LinkedIn attracts business people worldwide, many of whom regularly travel by air. This makes it an interesting platform for KLM.”

Apart from career opportunities, over 70,000 followers on LinkedIn currently already benefit from KLM’s business-oriented blogs and posts and extensive product information. By adding LinkedIn to its range of webcare platforms, KLM offers its customers even better service.

KLM has more than 10 million fans and followers on social media. KLM has more than 6 million fans on Facebook, and crossed the 1 million follower mark on Twitter last month. KLM receives more than 35,000 mentions a week on social media, around 4,500 of which are queries, which are handled by 130 service agents, who are available 24/7. Customers can contact KLM in one of ten different languages: Dutch, English, German, Spanish, Portuguese, Italian, French, Norwegian, Russian and Japanese.