If you’re following me on Facebook, Instagram, Twitter and/or Periscope, you know I was just in the Big Apple to speak at the New York Times Travel Show. I had an interesting week after sending last week’s newsletter and this is how it played out: 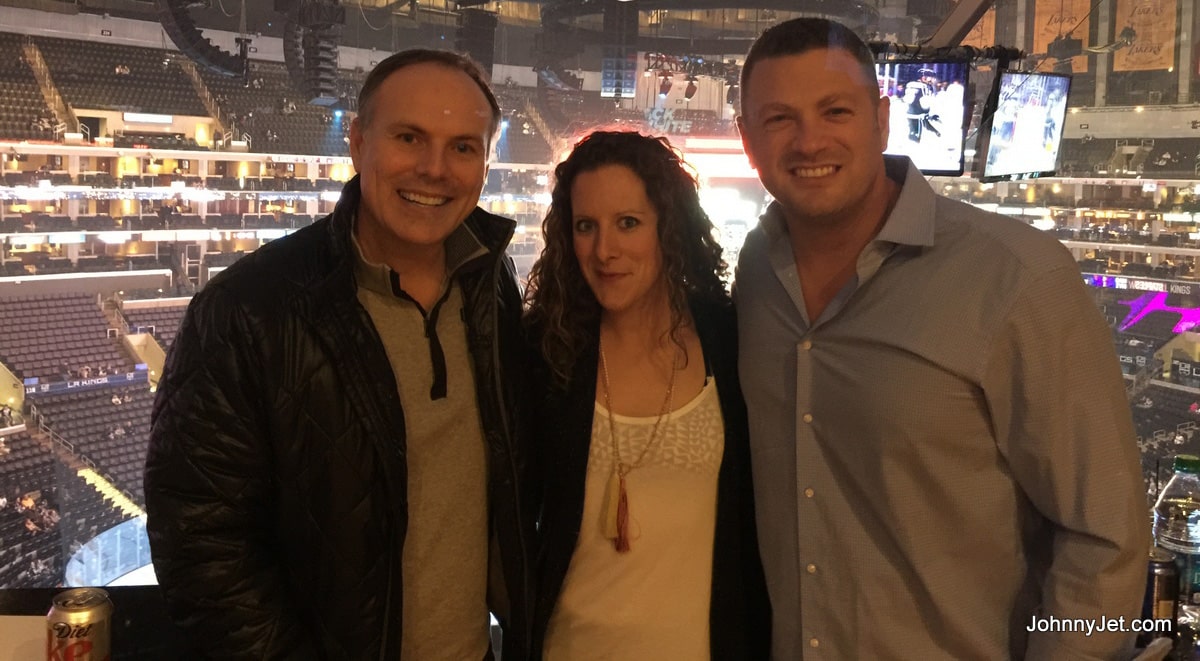 Thursday: L.A. Kings game
On Thursday night, Natalie and I went to an L.A. Kings game at the Staples Center since they were playing her beloved Toronto Maple Leafs. The fact that we were invited to watch it from a swanky suite by one of the Kings’ and my sponsors, Travel Alberta, made it an offer we couldn’t refuse! It’s such an amazing experience to watch a hockey game from the suites, especially when the host orders all kinds of food and brings around the incredible dessert cart. We left the game shortly before it ended since we had an early to flight to the east coast the next morning and we were beat from our trip to Hawaii. 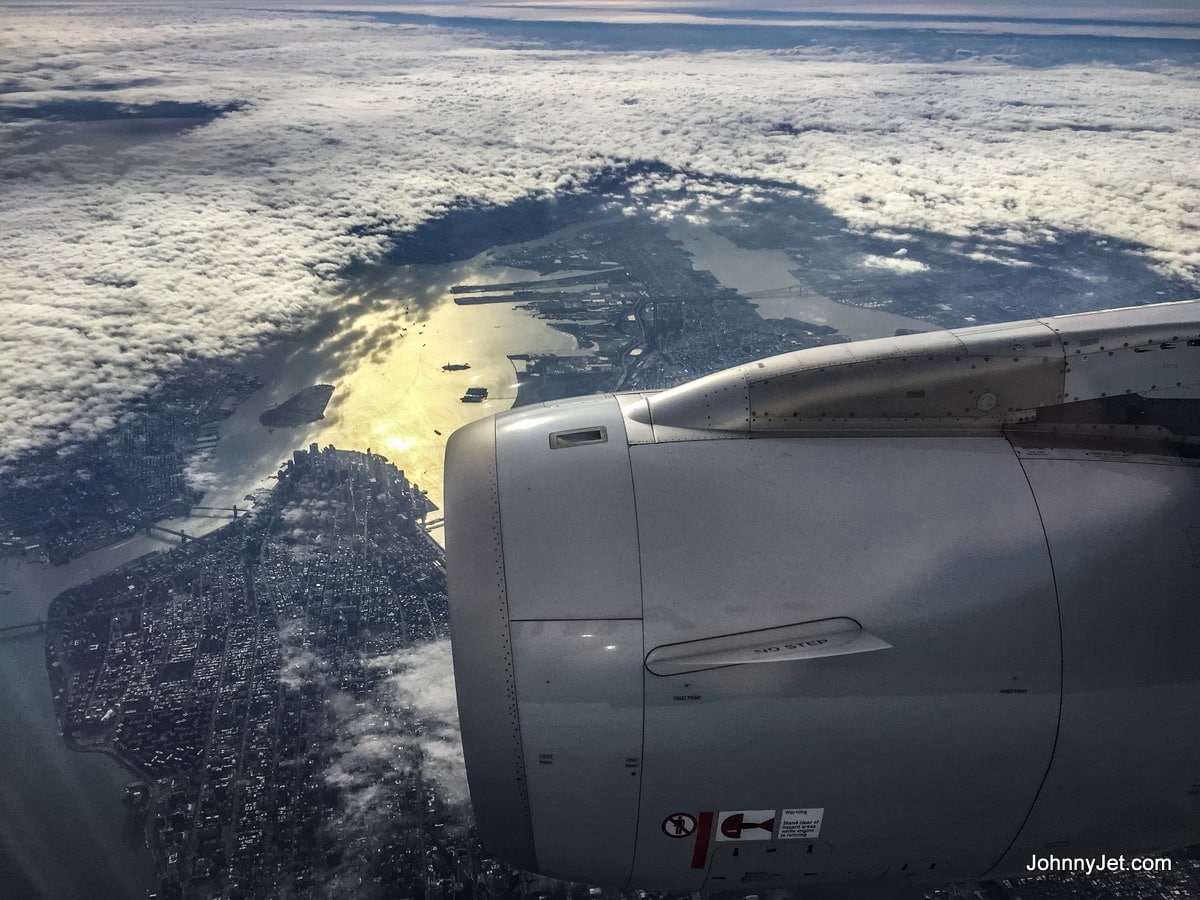 Friday: LAX to JFK
I booked our tickets months in advance to fly from L.A. to New York, arriving on Friday night. Then our longtime sponsor Allianz asked if Natalie and I could attend a special dinner. I was figuring dinner would be around 7:30-8 pm since many eat late in NYC and we got lucky because American Airlines changed their flight schedules. When an airline changes their schedules, even by just a few minutes, it usually allows you to change your flight without charge. That’s one of the advantages of booking early.

So I changed our 12 pm flight to 9 am. Then a few days before our flight, Allianz sent me their schedule and dinner was at 6:30 pm! We were scheduled to land at 5:30 pm so it was cutting it too close.

I’m Executive Platinum so I can change my flights for the same day within 24 hours for free. However, since Natalie is only Platinum and we weren’t on the same reservation number, they wanted to charge her $75. I could tell right away that the agent wasn’t friendly so I kindly said I would think about it and hung up. I then called right back and the next agent put us both on the 6am flight for no extra charge.

Why did I choose the 6 am flight over the 7 am or 8 am? Because I looked up the flight loads, specifically in business class and it had the most seats available which meant the greatest chance of getting upgraded.

Fortunately, I got upgraded in the middle of the night but when I called about Natalie, the agent said there was only one seat left and the agent wouldn’t tell us what number she was on the upgrade list. So we went to the airport and the agent said Natalie was number four on the list which meant there was no chance of her getting bumped up. I then had them tie her to my reservation since I have higher status and she jumped to number one! By the time we got to the gate, the upgrade had cleared. Score! American’s lie-flat seats on their A321Ts really make the four hour and 15 minute flight easy.

Tip: Of course, our seats weren’t together but it helped that she was in a window and I had an aisle so it makes it much easier to switch with someone. However, travelers are finicky and often don’t want to give up their preferred seats. 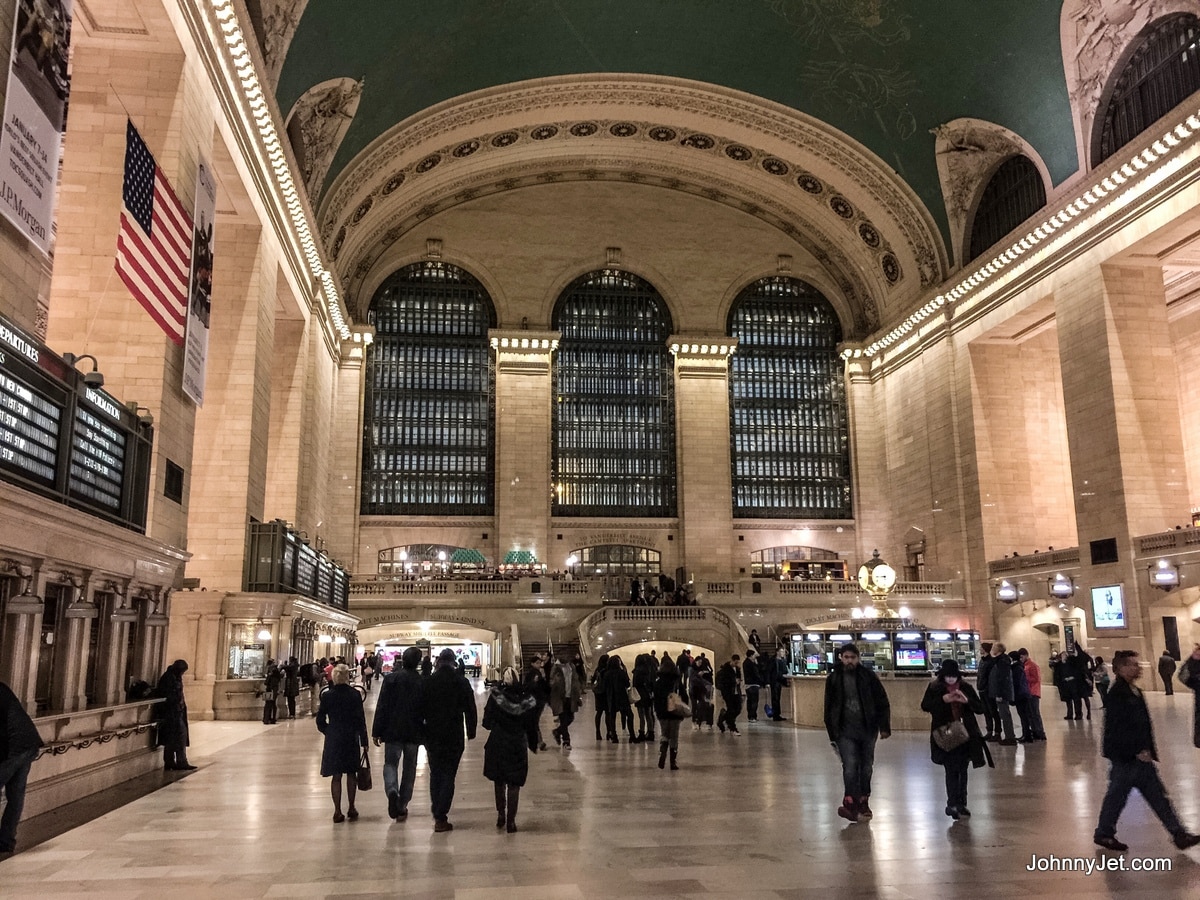 JFK-Manhattan
We each checked a bag this trip since I had presents to bring (cookies from Honolulu Cookie Company) and clothes for two climates. Normally, with carry-on, we would just jump on the AirTrain to Jamaica station ($5.50) and then either get on the E Train ($2.25) to 51st Street or the train to Penn Station ($11), depending on where our hotel was located. But since we had oversized bags, it was 2:30 pm and Waze was showing driving time into the city was 45 minutes, we took uberX. We had to wait seven minutes for the driver, which was kind of a pain since there was no line for the taxi but Ubers are more comfortable, the drivers are nicer and I have a ton of $15 credits (my code is uberjohnnyjet). Here’s more on Uber, including 10 tips to make it a better experience. 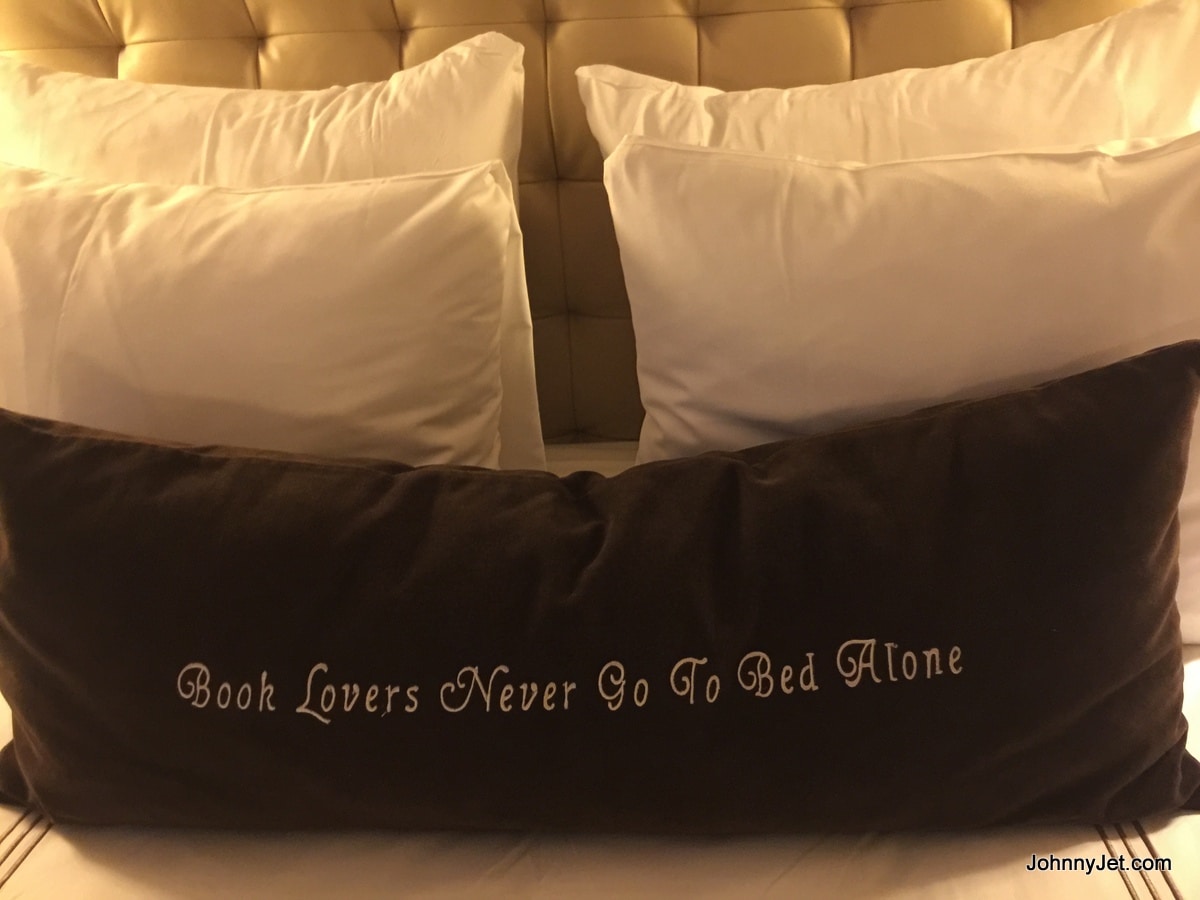 Library Hotel
While we were at the ILTM conference in Cannes last month, we met with the executives of the Library Hotel Collection. They have hotels in Budapest and Prague, a 404-room property opening soon in Toronto and several hotels in NYC. I’ve always wondered what their Library Hotel was like since it’s so unique—they have over 6,000 books throughout the hotel, including in the rooms. So we took them up on two free nights and paid for the third. Here’s my story. 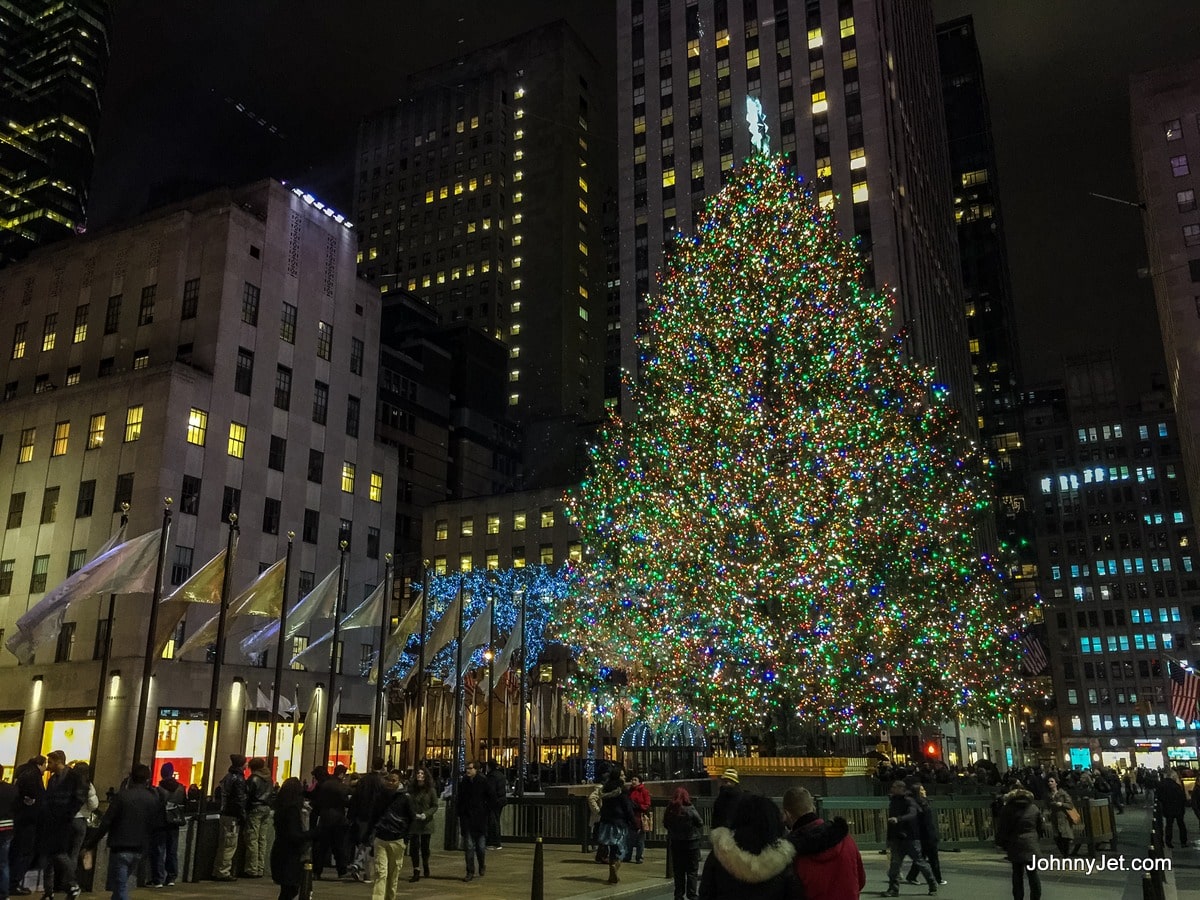 Rockefeller Center
Before we headed out to dinner, my sister Carol called to say she was walking up Madison Avenue. Our hotel was on 41st and Madison so she came by and said hi. Natalie and I then walked to dinner, which was on 52nd and Sixth Avenue. On the way there, we made a quick detour to Rockefeller Center (between 48th and 51st Streets and Fifth and Sixth Avenues) to see if the Christmas tree was still up. It was supposed to be down by January 6th but to our surprise, it was not only up but it was still lit and there were hardly any crowds. It was Natalie’s first time seeing it in person and she was stunned by its beauty. 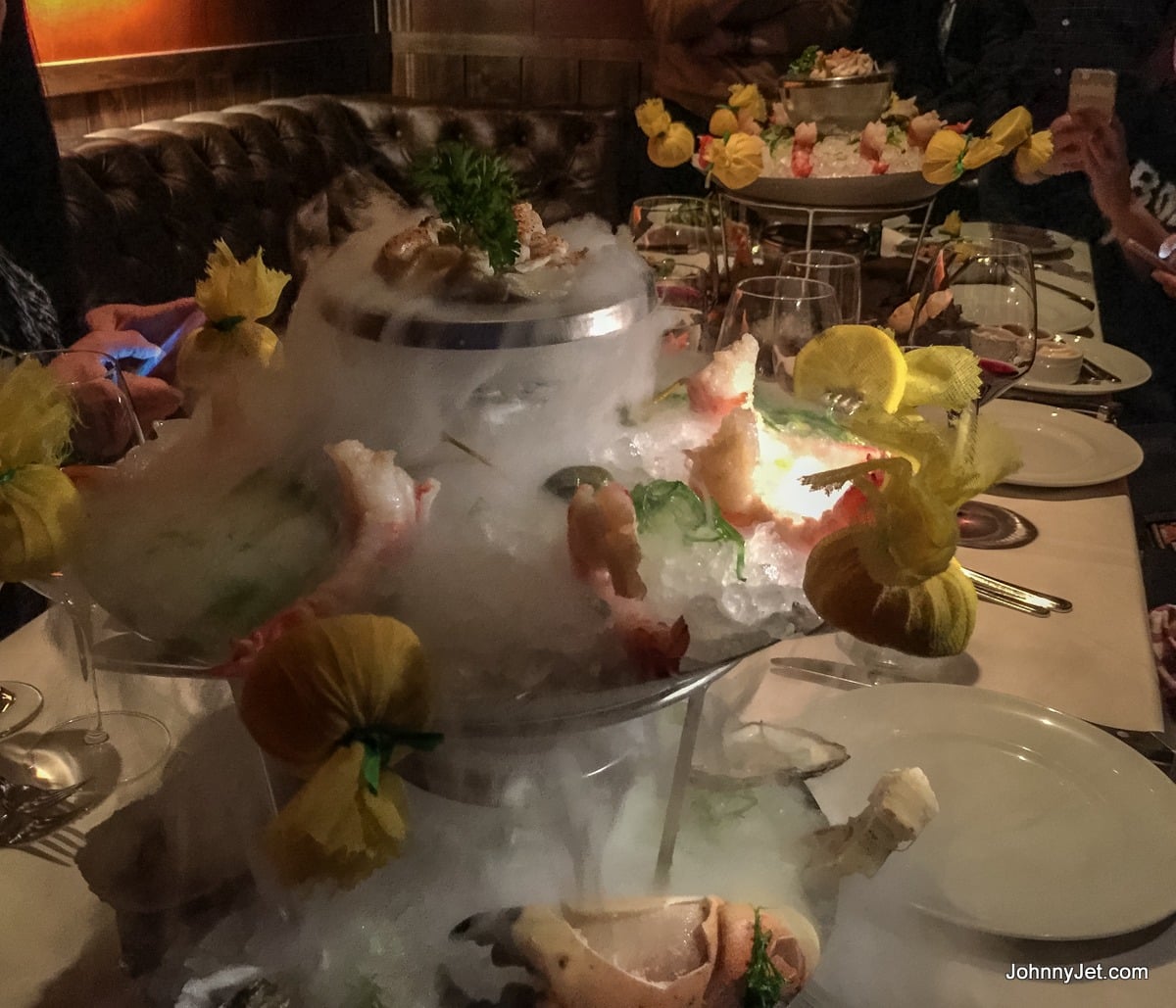 Allianz dinner
If you read my newsletters in early December, you;ll remember I kept plugging a contest hosted by Allianz (here’s my annual policy with them). They were giving away a trip to New York City for two but it had a twist. One winner would be a travel blogger, another a travel agent and the third, a regular traveler. Part of the prize was to have dinner with me and two of my colleagues; Lee Abbamonte, the youngest American to visit every country in the world, and acclaimed photographer Gary Arndt. We all dined at Mastro’s Steakhouse and Allianz did not hold back on the food. It was a feast for a king and a really memorable evening. 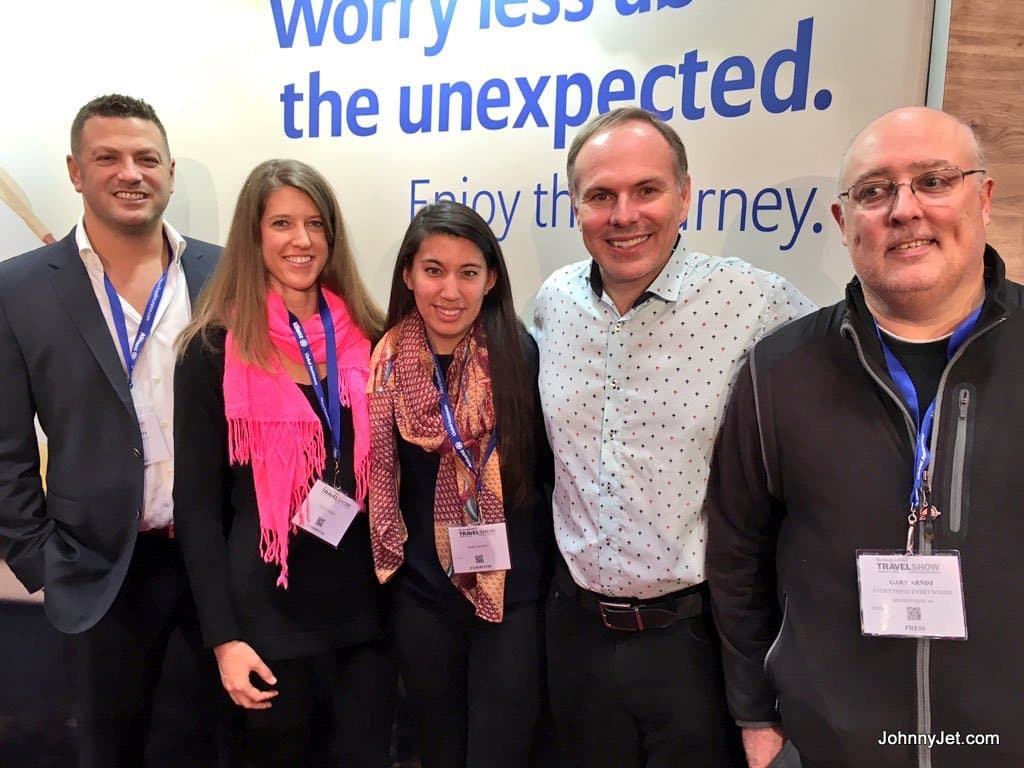 Saturday
On Saturday, I was planning to head out to Connecticut to see my family (I grew up 42 miles away from New York City) but I had too much work to do to prepare for my Sunday talk. Besides, my family and friends all said they were going to come see me speak so it would save me a trip. I headed to the show to see Lee speak and stop by the Allianz Travel Insurance booth. While there, I also called into Leo Laporte’s The Tech Guy show from the speakers room, which had surprisingly great Wi-Fi.

Hillstone Restaurant
That night, a group of friends and I went to dinner at Hillstone Restaurant. It’s the same owners as Houston’s and what I heard is that it used to be a Houston’s but they changed their name. New York has a law stating that if a chain has more than 19 restaurants, they have to put the calorie counts on the menu. Houston’s is known for its rich food and didn’t want to publicize the calorie counts, so they split their 38 restaurants into two brands, naming the other brand Hillstone. It’s basically the same look, feel and menu but Hillstone has a sushi bar. I don’t recommend it unless you live in NYC since the city has so many incredible non-chain restaurants. 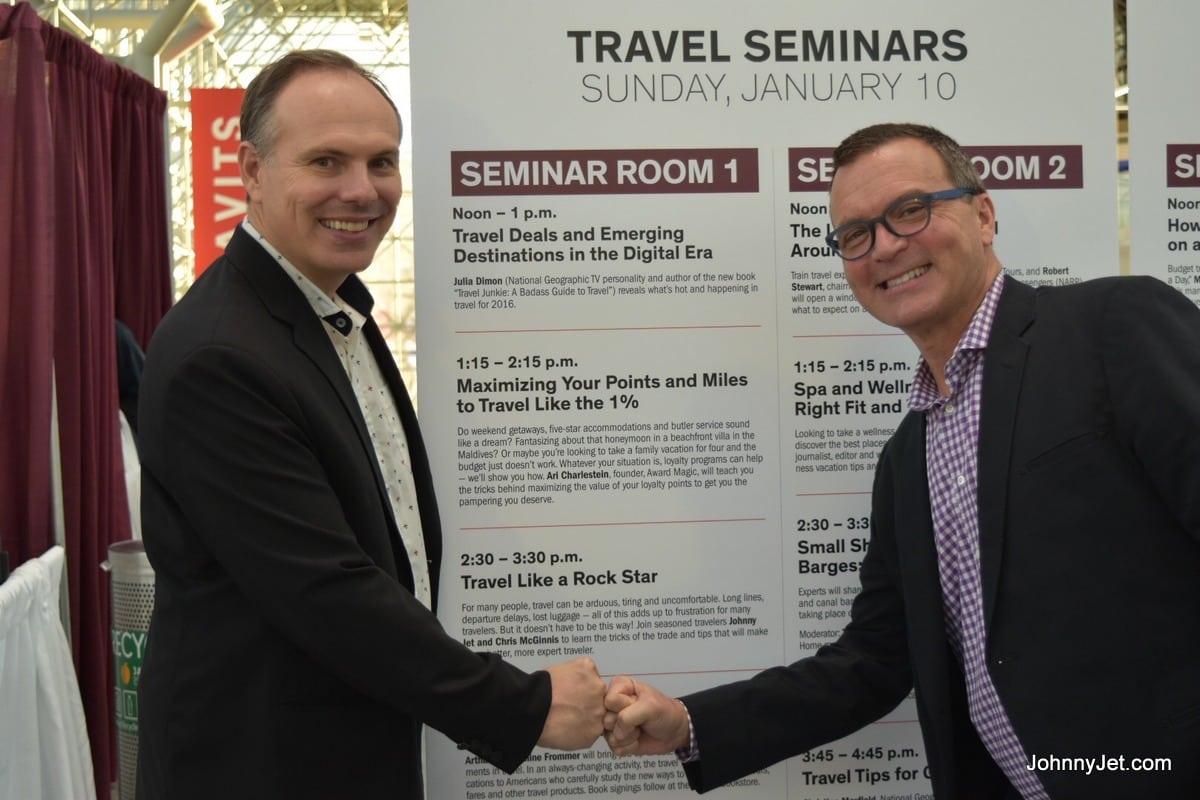 Sunday
Sunday was the big day – my presentation at the New York Times Travel Show. I met my colleague Chris McGinnis at his hotel, which was located near the Jacob Javitts Centre, so we could do a quick run through of our presentation. It was a shockingly warm day. I’m talking 61F degrees. We didn’t think anyone would show up to our session since there were some heavy rainstorms (my brother didn’t come since his basement flooded), it was late afternoon on a Sunday and there were NFL playoff games on the tube. But we had about 500 people in the audience and they really seemed to love it. Here are some of the tips I shared during my session: 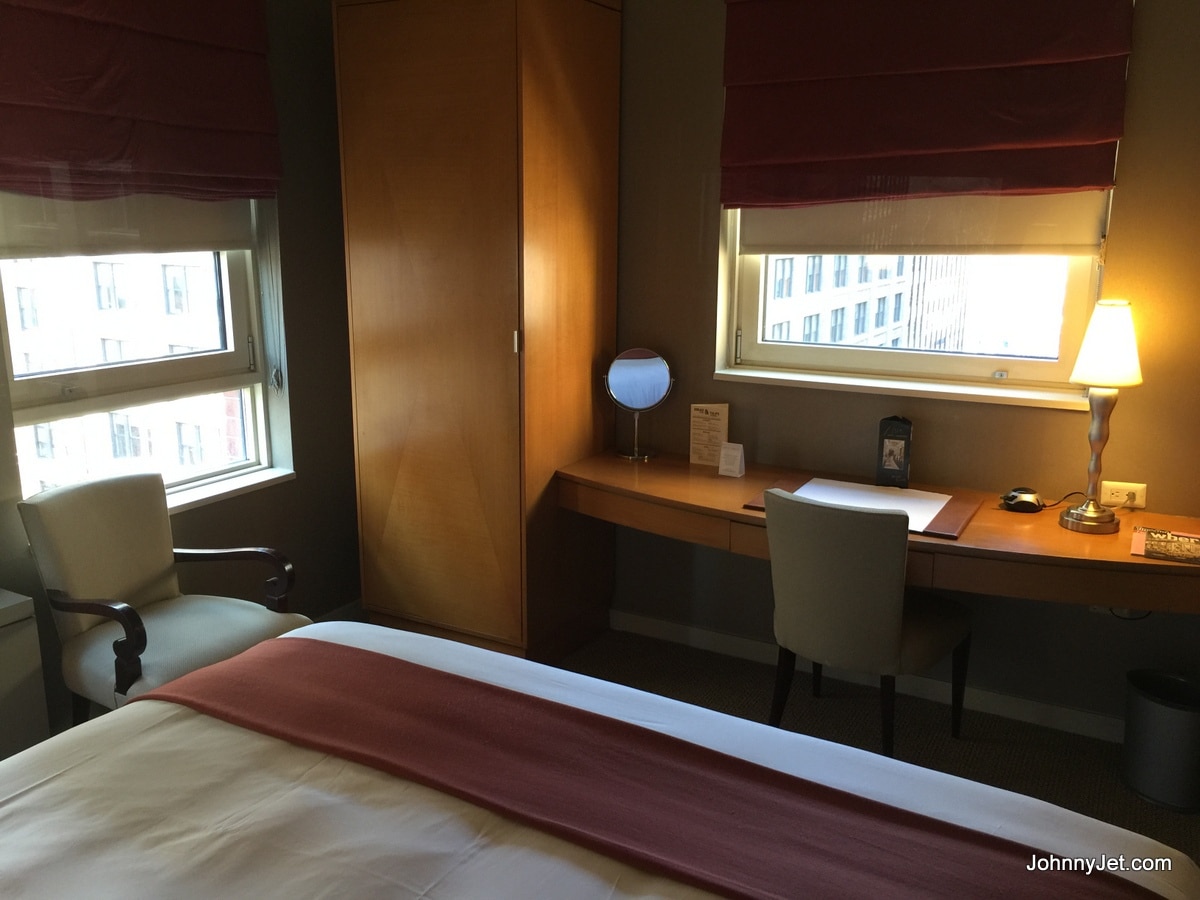 Monday and Tuesday
On Monday, Natalie and I checked out of the Library Hotel and into their sister property, Hotel Giraffe. It’s located on 26th and Park, so it was a brisk 15-minute walk (the temperature dropped to 30F). Hotel Giraffe is another boutique hotel with 73 spacious rooms and they offer the same amenities as the Library Hotel: Complimentary continental breakfast, wine and cheese from 5 pm to 8 pm and 24/7 coffee, tea, fruit, and pastries.

Natalie and I zipped all around town, meeting travel company after travel company on both Monday and Tuesday. And we walked a lot. About 12,000 steps each day and then, not surprisingly, by Tuesday night I started to feel rundown. My other sister, Georgie Jet, came into town to go to dinner but I had to bow out since I was exhausted and had a low grade fever. So Natalie and her went to the hotel’s restaurant, Bread & Tulips. I’ve eaten there once before with my dad so I knew they had excellent Italian food and they confirmed it. 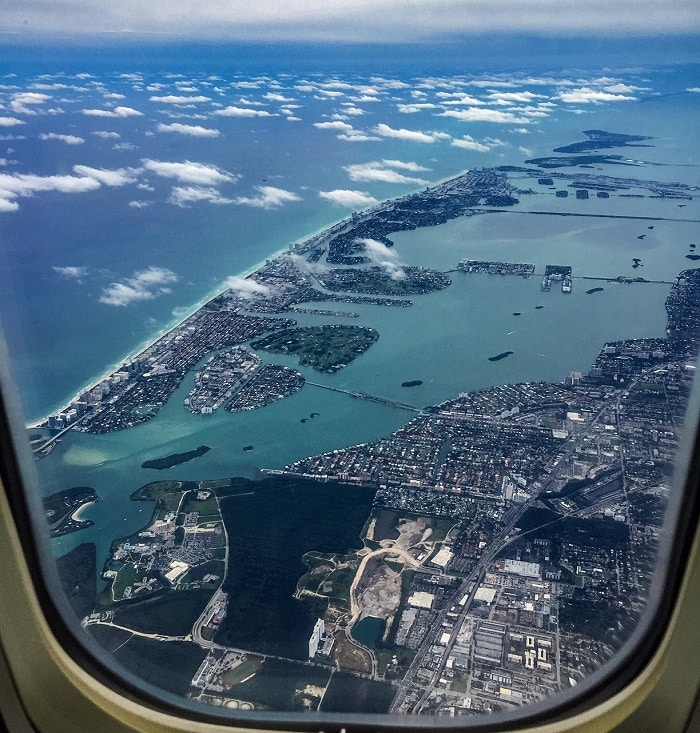 Wednesday
On Wednesday, we checked out of our hotel at 10:30am and took an Uber to LGA. The driver happened to be parked right outside of the hotel so there was no wait. The drive took 24 minutes and cost $38. After checking our bags, we went straight to the Centrurion Lounge to check out their food but since it’s on the wrong side of security, we then went through TSA PreCheck to the AA lounge. Natalie and I were in the exit row, heading to Miami to make our connection and before the flight attendants shut the door, I saw the gate agent walk down the aisle with a ticket in her hand. Sure enough, one of the first class passengers didn’t show up and since I was at the top of the list, she asked if I wanted my upgrade. Natalie wouldn’t take it so I did. We had a three-hour layover in Miami so we spent most of it in the Centurion Lounge and then Natalie got the last first class seat on our next flight. Turns out since she was tied to my reservation and alphabetically she comes up first, she got the upgrade. We’re now in the Cayman Islands for the Cayman Cookout, which I will write about next week. I’ll be posting photos in real time on social, so follow along!

0 Comments On "L.A. to New York for the New York Times Travel Show"