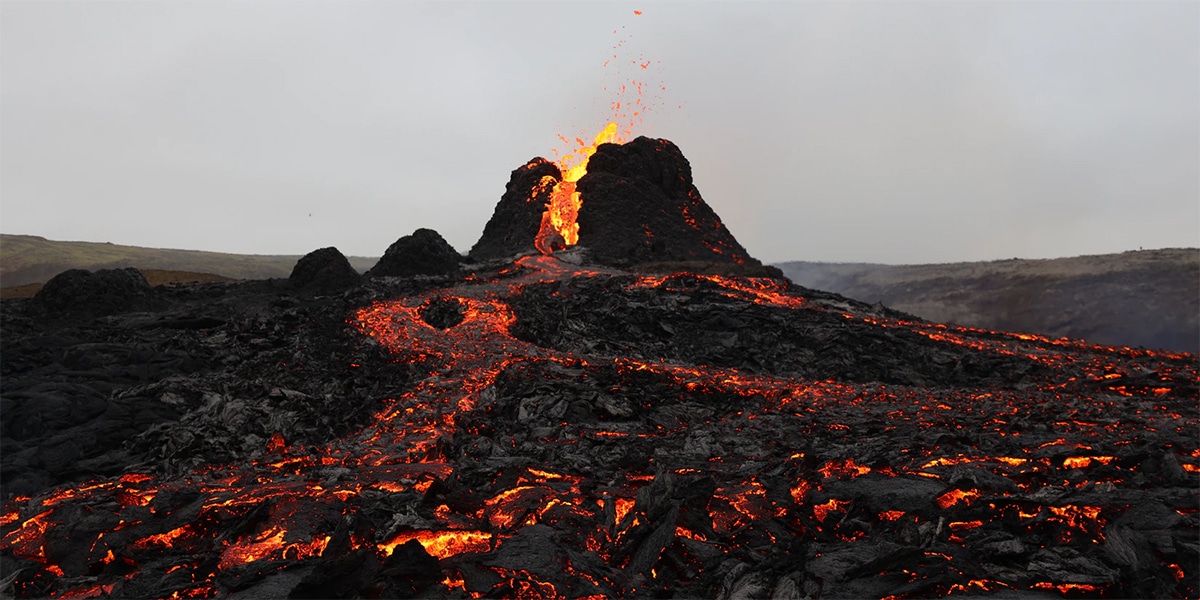 I’ve been fortunate to visit Iceland a couple of times, once in 2006 and again in 2011, and I learned firsthand just how remarkable this island nation is. I wasn’t expecting it to be so green and beautiful in parts. If it seems odd that Iceland is so green and that Greenland is so icy, it’s not a coincidence – think of it as the result of a medieval marketing scheme, according to National Geographic. You can read their full story here, which is quite interesting.

My favorite tour in Iceland was snowmobiling on a dormant volcano. When I went, it wasn’t long after Iceland’s Eyjafjallajökull (“glacier of Eyjafjöll”) erupted in April 2010, which made worldwide news when 20 countries closed airspace and all the flights between the U.S. and Europe were canceled for six days. I was one of the 10 million passengers impacted as my trip to Southern England had to be canceled.

Eyjafjallajökull was smoking for a while because I remember flying over it a month later on a SWISS flight from Zurich to New York and it was still active. It was quite a sight but my photo doesn’t do it justice.

Well, there’s another volcano erupting and it happened just recently. According to BBC News, “Thousands have flocked to a volcano in Iceland which erupted near the capital, Reykjavik. Lava started to burst through a crack in Mount Fagradalsfjall on Friday evening, in the first eruption of its kind in more than 800 years. The site was initially blocked off, but from Saturday afternoon people were allowed to make the trek. “It’s absolutely breath-taking,” Ulvar Kari Johannsson, a 21-year-old engineer, told the AFP news agency. “It smells pretty bad. For me what was surprising was the colours of the orange: much, much deeper than what one would expect,” he added. Scientists at the foot of the volcano were filmed cooking sausages on its lava as they studied the eruption.”

Thanks to this live webcam from Iceland, now you can view this livestream. It’s exciting to see oozing molten lava especially when you’re not in harm’s way.

According to CNN, “The current eruption is “small” with the “volcanic activity” having “decreased somewhat” in the area, the agency said on Twitter. The eruptive fissure is approximately 500-700 meters long according to the IMO with the lava area spanning less than one square kilometer.

Despite this reduction in activity, the lava flows still pose a “local hazard,” the IMO said. “Gas pollution is not expected to cause much discomfort for people except close up to the source of the eruption,” a further tweet added.”

This is What Happens When You Fly a Drone Into a Volcano
Photographer Garðar Ólafs — and founder of the Iceland-based stock agency Airstock — recently took his DJI drone to the skies above the erupting Geldingadalir volcano and may have gotten a little bit too close.
H/T Petapixel.com.

Vaccinated? Iceland is Open
If you want to get up close to the volcano or better yet tour around Iceland than you’re in luck. Just last week Iceland began letting in vaccinated Americans in. According to Andy Luten of Business Insider for now all that’s required is the paper CDC vaccination card. Luten described entering the country as “nonchalant” as he easily cleared Icelandic border control.