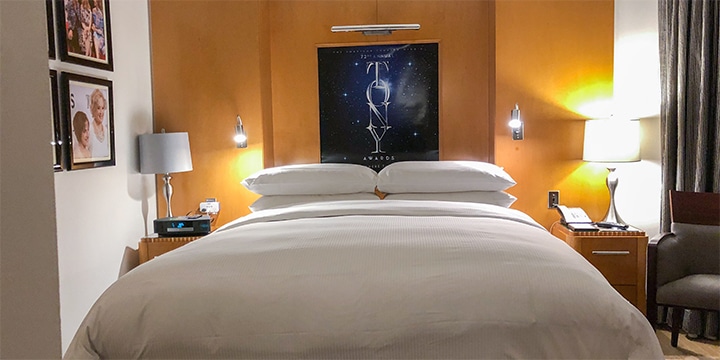 On June 10, the 72nd  Annual Tony Awards will roll into the Big Apple, taking center stage at Radio City Music Hall and just in time, the Sofitel New York has raised the curtain to its Tony Awards-themed suite. The stylish, French-inspired Sofitel New York is located in Midtown on 44th Street, between Fifth and Sixth Avenues so it’s just a few blocks from the theaters. 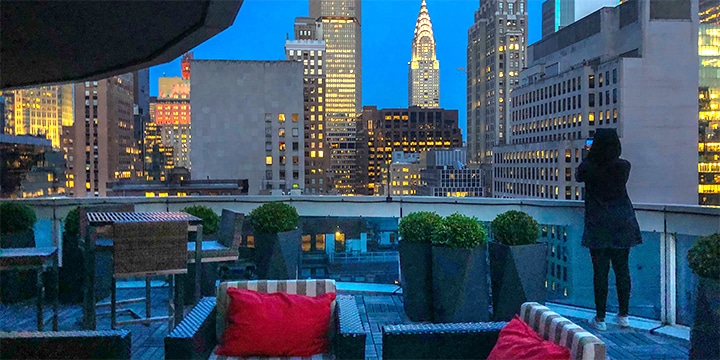 My wife, son and I were fortunate to enjoy a hosted stay in the luxury terrace suite, located on the hotel’s 24th floor. It has seriously breathtaking views of Manhattan’s skyline and the wraparound terrace is so big, you’ll want to invite all your friends over for cocktails at sunset … and after that, who knows what’ll happen. Maybe a show tunes singalong if you’re a huge Broadway fan! 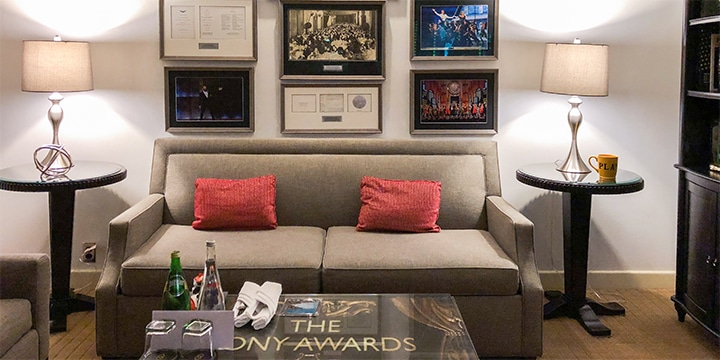 Inside the spacious Tony Awards Suite, guests will find memorabilia and Tony-themed amenities that spotlight the evolution of Broadway and the character it has brought to New York City. Amenities include a Tony song book, award-winning scripts, opening number photography, programs, invitations, Playbills from 1960 and beyond, and more. When we first entered the suite, there were clips from previous Tony Awards shows playing on the TV and there’s a Broadway street sign in the room. There’s even a dressing room mirror with light bulbs all around that’ll make you feel like a bit of a star yourself.

If you have deep pockets and are a Broadway fanatic, then the hotel’s larger-than-life $100K Tony Awards Package to benefit the Broadway League & The American Theatre Wing should be on your radar.

What do you get for the $100K Tony Awards Package? Guests will spend seven nights, June 4-11, 2018, in the exclusive Tony Awards Suite. Upon booking, Sofitel New York will make a $50,000 donation to the Broadway League & The American Theatre Wing. The package also includes:

If the 100K package deal is too rich for your blood, not to worry! You can still experience the suite through July 15, 2018 with rates starting at $2,000 per night.

Another option is for Le Club AccorHotels members as the hotel offers Elite Tony Awards packages and experiences. From 20,000 rewards points, members can book any of the following packages with the option of adding a night in a Superior Room and breakfast at Gaby Brasserie:

The 72nd Annual Tony Awards, hosted by Sara Bareilles and Josh Groban, will air live on CBS on Sunday, June 10, 2018. The Tony Awards are presented by the Broadway League and the American Theatre Wing. For more information on the Tony Awards, visit www.TonyAwards.com.