My Most Embarrassing Travel Story Involving a Japanese Ryokan 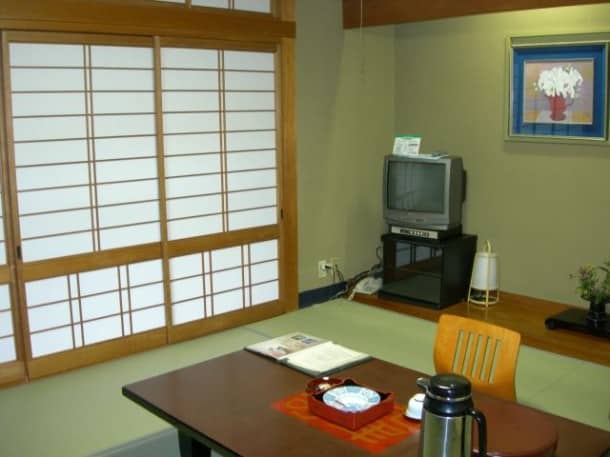 In 2005 I went on a Memoirs of a Geisha fam trip where they took me to all the sites that were mentioned in the book/movie.  We checked into an above average ryokan called Sento (a traditional Japanese inn). It was located in the center of Kinosaki and it did not look like much from the street.

Inside, however, was a whole other world. I was escorted to my straw-smelling minimalist room (one of 40) by a friendly, non-English speaking, kimono-wearing woman. She politely reminded me (by pointing) to take my 6-sizes-too-small slippers off before I walked on the tatami (straw mat). The place was basically one big empty room, with a connected indoor balcony divided by a shoji (sliding paper wall). For the first time in my life I felt like I was in a James Bond movie (minus the babes).

I was so tired I just wanted to lie down on the bed — but there wasn’t anywhere to do that. That’s right: My bed (a futon) only miraculously appeared at night, in the center of the room. I never thought sleeping on the floor could be comfortable, but it was. Before my bed showed up the room contained only a very low table, a cushion, a dresser and a television that got three Japanese channels.

Fortunately, the bathroom didn’t have a hole in the ground like many I read about. This one had a modern Western toilet with a heated seat, and some crazy bidet buttons I was too afraid to press. But once I pressed them I didn’t want to get off the can (whole other story).

Inside the tiny bathroom was a separate pair of miniature bathroom slippers to be worn only in there. My big toe couldn’t even fit in these, so I just stepped on the tops.

Hot Springs
Like the others, my room had no shower. Instead there was a towel, washcloth, and a yukata (robe) which was to be worn down to the hotel or public hot spring. Luckily, I didn’t slip the yukata on right away, because five minutes after the first woman left, in came another with a cup of green tea and manjuu (a sweet bean paste bun).

After drinking my tea and trying that nasty tasting bun (must be an acquired taste), it was time to wash up before dinner. I donned my yukata, making sure it was tied correctly. It’s important that the left side overlaps the right. Only dead people wear them the other way, and I don’t want negative karma swirling around. I didn’t learn until later that you’re also supposed to wear underwear beneath them. That was a HUGE mistake, which I won’t get into — except to say those robes don’t stay tied too well.

Spa at the Ryokan
I first walked across the street to check out one of the popular public baths in town. My imagination pictured something totally different. Stupid me expected to see a room filled with beautiful women wearing angel wings as they frolicked around the pool. When I took one peek inside, I quickly put on my shoes and ran back to the hotel. I have no desire to bathe in a crowded, steamy room filled to the rim with naked Japanese men. Instead I went to our hotel spa. It was not only free (well, included in the price of the hotel room – at the time — ¥130,000 = $130 for two people), but empty as well.

There are more rules, which are good because you don’t want people running in doing cannonballs without showering. Before entering the communal natural hot bath, it’s important to shower. To do this you sit on a 6-inch high, not very wide stool. Who were these things built for? I was so relieved there was no one else in the room, because I kept falling off that damn thing.

Wrong Room
At dinner (the most popular dish was crab), the women in our group were complaining that the women’s bath was really small. I thought that was odd, because the men’s bath was huge. There was even an outdoor tub, with a very peaceful mini-waterfall trickling down the rock wall. I must have been in the bathroom when they told the women, “Don’t worry. You’ll get to see the other spa tomorrow, because every day they swap the facilities at the Sento ryokan. Everyone gets to experience both spas.”

You should have seen the look on the Japanese woman who came strolling into the bath stark naked the next morning, only to find King Kong trying to scrub his arse on the miniature stool. Talk about a deer in headlights! I had no idea I was using the women’s bath. Hey, like I can read the Japanese character in the front that says “Female,” “Women,” “Ladies” or “Jackasses.”

When I told that story at breakfast, everyone (but me) was in tears from laughing. It’s funny now, but the scene was ugly. The poor woman didn’t speak any English, and me speak no Japanese. All I know is we both broke Rule #1 in Japanese public baths: Don’t make eye contact or stare. 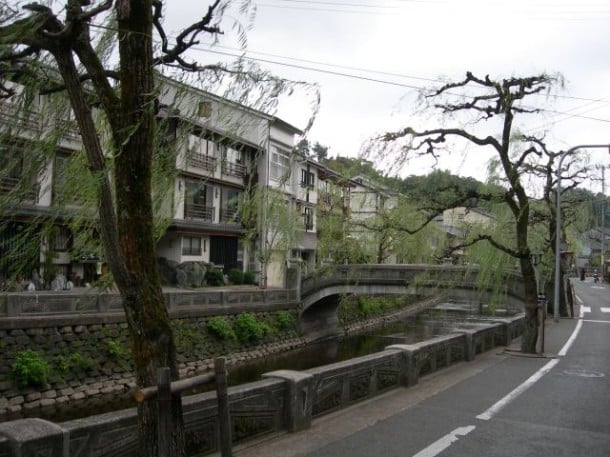 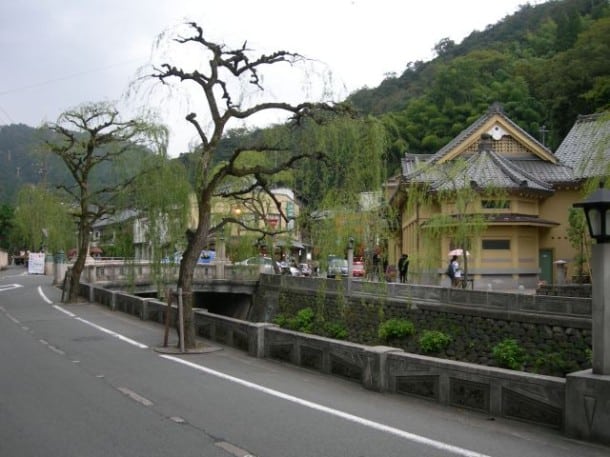 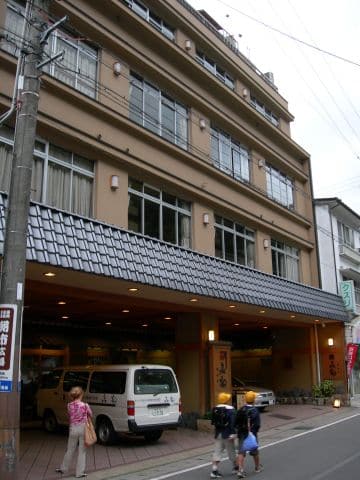 My room at Ryokan Sento in Kinosaki, Japan 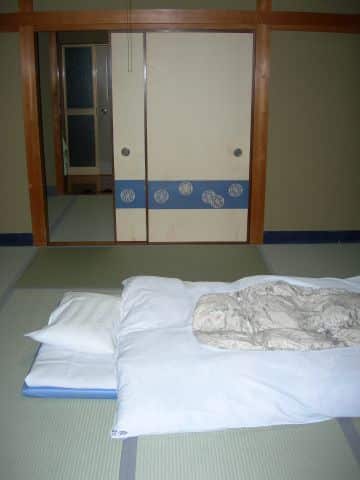 My bed at Ryokan Sento in Kinosaki, Japan 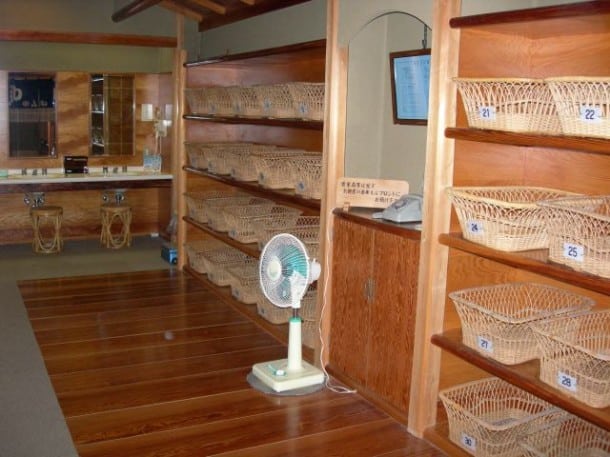 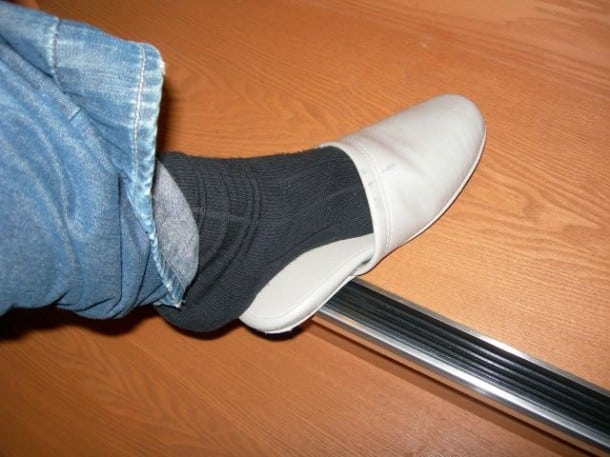 My slippers at Ryokan Sento in Kinosaki, Japan 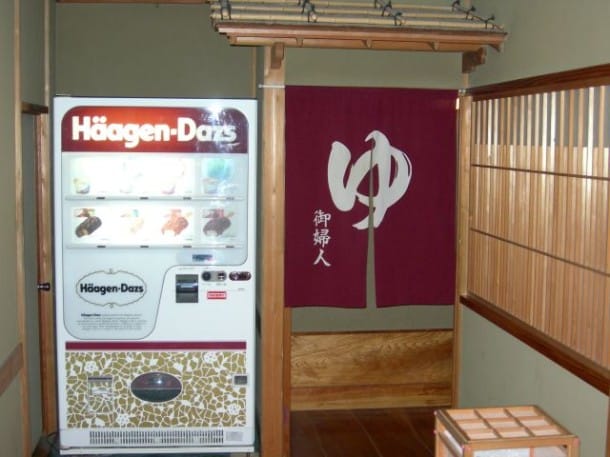 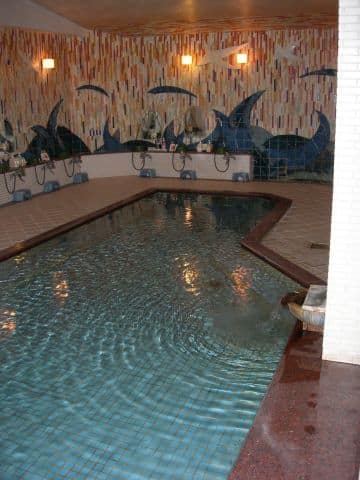 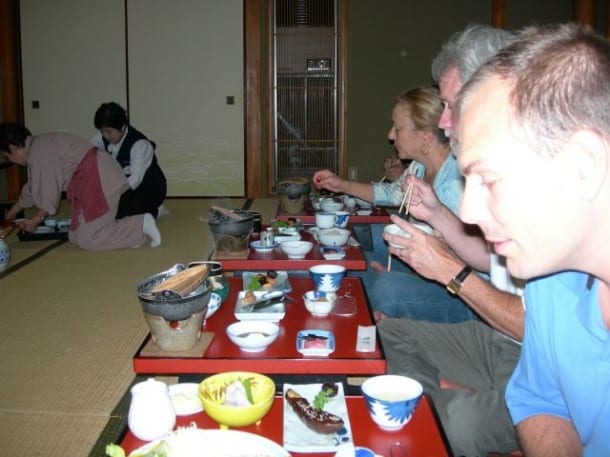 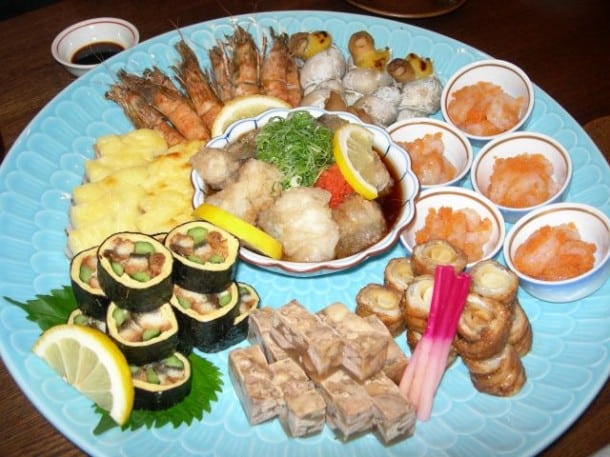 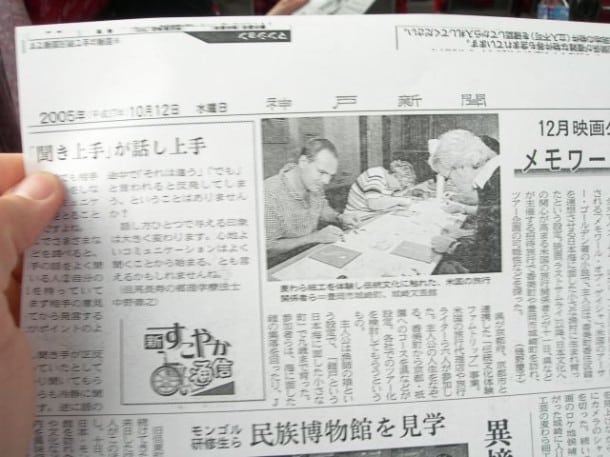 I made it in a Japanese newspaper 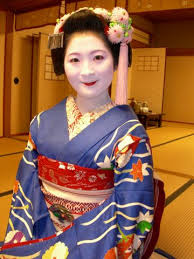 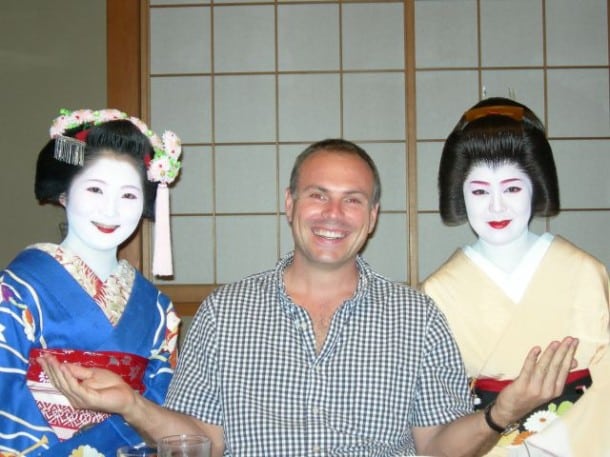