North, South, above, and below in New Zealand

New Zealand is the new “in” place to go; it seems like everyone either has been or is going. So, I thought it might be a good idea to escape there to avoid Vancouver’s traditional dreary rainy October weather.

My G Adventures New Zealand tour, New Zealand in Style, covers both the North and South Islands in 11 days, hitting a lot of the must-see sights. It’s billed as a “comfort” tour, which means the accommodations are more upscale and designed to appeal to a demographic that still wants some adventure with their creature comforts. Even though the hotels are rated as four- and five-star, they still conform to G Adventure’s mandate requiring the use of local resources whenever possible. I was surprised that nearly half of the 16 participants on my tour were under 30 and hailed from a wide range of countries: England, Ireland, America, Sweden, Australia, Thailand and Canada.

To the North Island!
My first impression upon arriving was that New Zealand resembles one huge golf course—populated mostly by sheep. The population of New Zealand is only 3.3 million, but there are 33.3 million sheep—roughly ten sheep per person. You can’t go thirty feet on either island without running into one. If you can’t sleep and want to count sheep, come to New Zealand. The other thing that immediately struck me was that almost all of New Zealand is “low-rise,” much like Canada of the 1930s or Regina today. On the half-hour trip in from the airport I don’t think I saw more than a couple of buildings more than two-stories high.

Our first stop on the North Island was Raglan, the surfing capital of New Zealand and a small seaside village to the southeast of Auckland. Raglan claims to have the largest left break in the world, which impressed me—even though I haven’t a clue what that means. Fortunately, there’d be an opportunity to find out what that means at the surfing lesson scheduled for the next day. Unfortunately, the lesson was cancelled due to the weather so I’ll never find out.

The following day dawned bright and sunny—just perfect for descending into the dark Waitomo Caves located south of Auckland. These caves, formed by rivers running underground for thousands of years through soft limestone, are famous for the glowworms that light up the ceilings and walls.

Upon arrival we were informed there are various options open to us for experiencing the caves: river rafting, tubing and repelling down into them. Most of our group signed up for tubing or river rafting; I opted for repelling, which sounded more exciting and like a chance to test out the spiffy new stent I recently had implanted in my heart.

The repelling process is simple enough; you simply step off the platform and winch yourself down. You control your descent by pulling up on the rope with your right hand. If you feel you’re going too fast, you can wrap your leg around the rope to slow your descent. This is the same method Captain Ahab used when tossing the harpoon into Moby Dick and we all know how that turned out.

I took a deep breath and stepped off the platform—dangling there for a moment—and once I knew I wasn’t going to plummet to my death I found the experience exhilarating. I slowly winched myself down the rope, like a dishrag on a vertical clothesline.

It took us exactly 15 minutes to winch down to the cave bottom and the raging river. Once there, the guides unattached us from the ropes, and led us into the cave to see the glowworms. But these aren’t exactly glowworms. In actuality they are more glowing maggots that hang from a string of spit from the cave ceiling. You’ve got to hand it New Zealanders. They’re excellent marketers, and knew that “Come and see the glowing maggots hanging from a thread of spit” wouldn’t cut it. Remember, these are the same guys who changed “Chinese Gooseberries” to “kiwis.”

We turned on our helmet lights and proceeded about a hundred yards into the cave until it was pitch black, sat down on a rock, switched off our lights and looked at the cave roof. I waited for someone to turn on their light to signal the “experience” is over. But no one did.

It was as dark as the inside of a cow, but if you looked up it was like the night sky on a clear night—with thousands of twinkling “stars.” You could almost make out constellations. I sat there, in the star-spotted dark, for what seemed an eternity. I begin to think everyone had left and I was sitting alone in the dark. I was tempted to turn on my light just for a second to make sure they were still there—but I didn’t want to be the first weenie to chicken out. Finally someone decided to be the king weenie and turned on their light and we all breathed a sigh of relief.

Back above ground, the next major event on our travel agenda was a visit to the UNESCO World Heritage Site Tongariro National Park to view the volcanoes. There are over 60 active, dormant and extinct volcanoes in New Zealand. The most famous one, Mount Ngauruhoe, was featured as Mount Doom in Lord of the Rings. Unfortunately as we made our way higher into the mountainous area, the weather deteriorated into a heavy rain.

Our disappointment at not being able to experience the volcanoes, however, was made up for by our stay at the Chateau Tongariro. Upon arrival at the hotel I got the feeling that we’d somehow been magically transported to Alberta’s Lake Louise. That’s because the hotel is actually based on the original Lake Louise Hotel (now The Fairmont Lake Louise).

To the South Island!
From Tongariro it was off to the Lake Taupo region, and then off to the little airport at Rotorua for a quick flight to Christchurch on the South Island. Christchurch, whose entire city centre was devastated by the 6.3-magnitude earthquake in 2011e. Two years later, there were still piles of debris everywhere. Where there wasn’t debris there were empty lots awaiting reconstruction. Buildings that weren’t totally destroyed were surrounded by scaffolding. The church the city gets its name from was still standing—sort of—but considered so dangerous that the city council has decided there is no way to save it—so down it will soon come.

The next morning we boarded a train for a scenic trip through the Southern Alps. While the weather wasn’t totally sunny, it wasn’t raining and so we were treated to spectacular views of the New Zealand Alps. While not as high as our Rockies, they were still  impressive.

Our destination for the day was Franz Josef Glacier in Westland Tai Poutini National Park, where we were scheduled for a can’t-miss helicopter tour of the glacier. Unfortunately the weather once again didn’t cooperate and the helicopters were grounded. Instead, our guide arranged for us to view the glacier from a scenic outlook in the park.

After a two-night stay in the park, it was off to Queenstown—a resort town of about 14,000 nestled in the mountains. Queenstown is considered to be the adventure capital of New Zealand. In the winter it features skiing and snowboarding. The ski runs are pretty tame compared to what we have here in Canada, which explains why we see so many Ausies and Kiwis at Whistler and Banff. In the summer, the main attractions are river rafting, bungee jumping,  jet boating, skydiving, and paragliding. If you want something a little tamer you can try fly-fishing or the luge.

Our guide had been promoting the luge ride as something we all had to try. I have some experience with the winter sports, and so my interest was piqued—but I wasn’t keen on speeding down the side of a mountain on a plastic sled at 80 miles an hour.

I was relieved to find that this ride doesn’t resemble the Olympic event at all—except in name. There’s no snow and the ride involves riding wagons in concrete channels down the side of the mountain. You control the speed with the handles; the more you pull back, the faster you go. Since we saw kids as young as five riding the “sleds,” we all signed up and enjoyed behaving like five-year-olds as we zipped down the mountain. The day’s other activities included an exciting ride up the river on a jet boat and a lake cruise on the Earnslaw, a restored 1912 steamship.

The final destination of the tour was an overnight cruise down Doubtful Sound. Doubtful Sound is reminiscent of the west coast of Vancouver Island, and features long fjords that open into the rugged Tasmanian Sea. Some of the inlets have familiar names, including the one named after Captain Vancouver. This wasn’t surprising since he did extensive mapping of the New Zealand coast in the late 1700s. On this last, incredible day, even the weather couldn’t dampen the spectacular scenery of towering mountains and rushing waterfalls.

Back in Vancouver
One thing I learned on this trip is that you can still have a good time in New Zealand even if the weather gods conspire against you. If you’re dressed for the weather you can still experience a lot of your trip without discomfort; a good Gore-Tex rain coat and rain pants are a must. They don’t take up much room in your day pack and can make a world of difference. And in the end, New Zealand is a spectacular country definitely worth seeing—rain or shine. 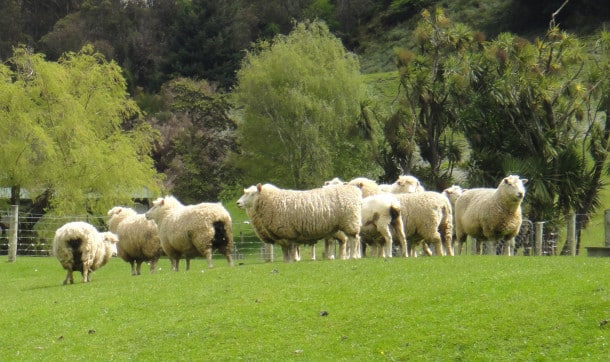 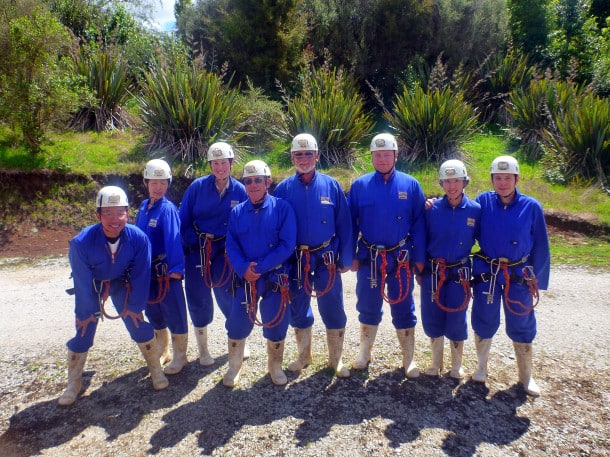 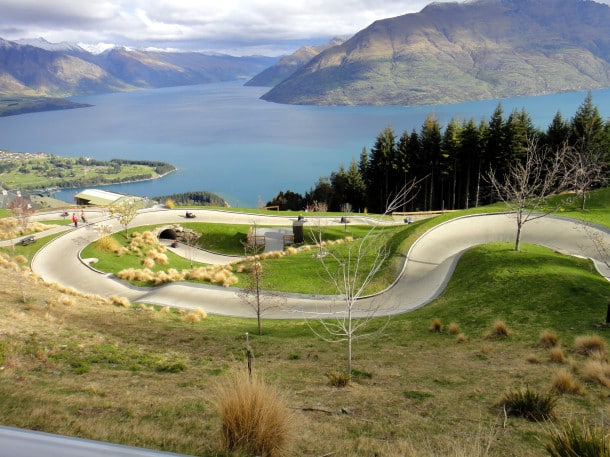 The scenic luge ride on the South Island 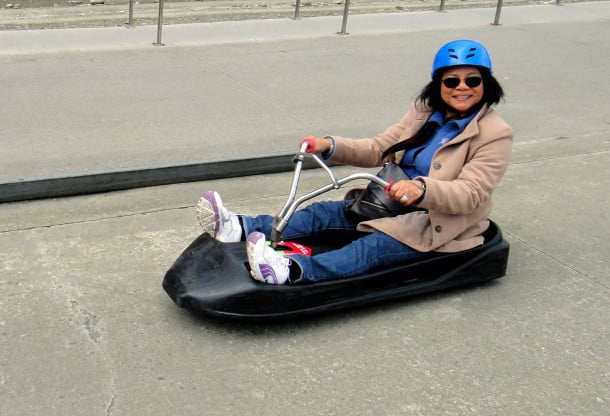 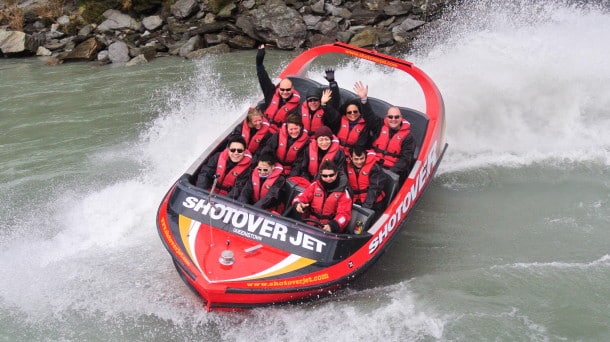 Jet boating on the South Island 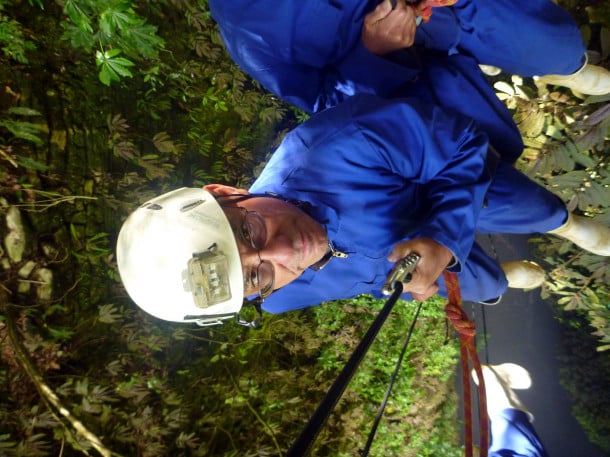 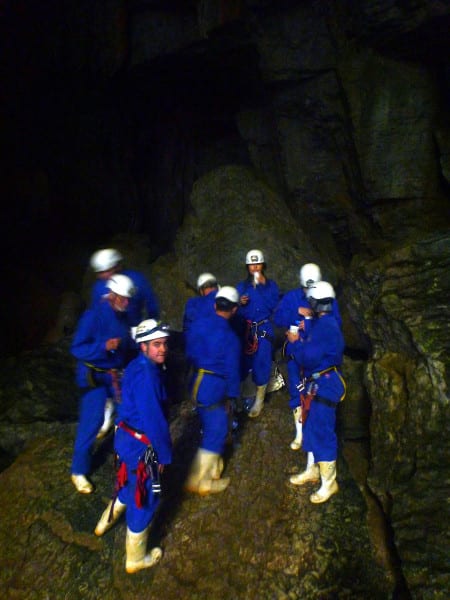 The group in the Waitomo Caves 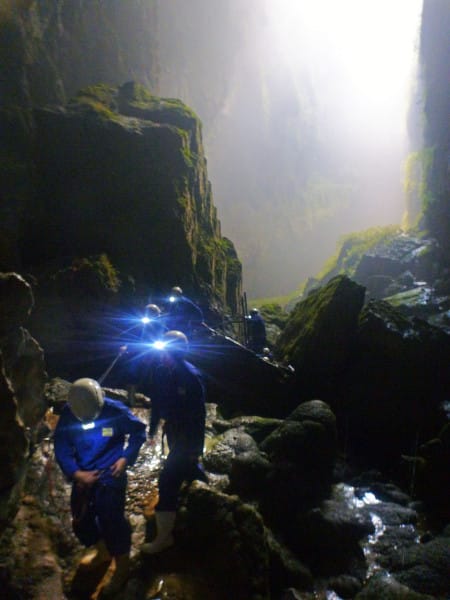 Deep in the Waitomo Caves 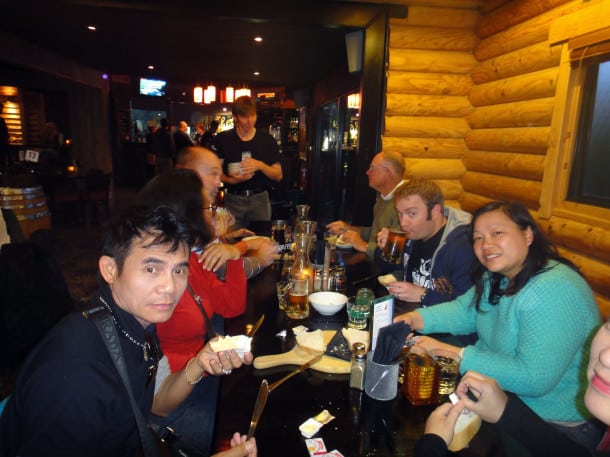 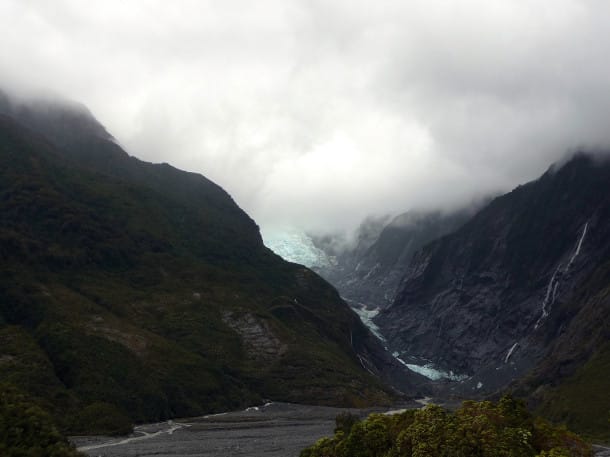 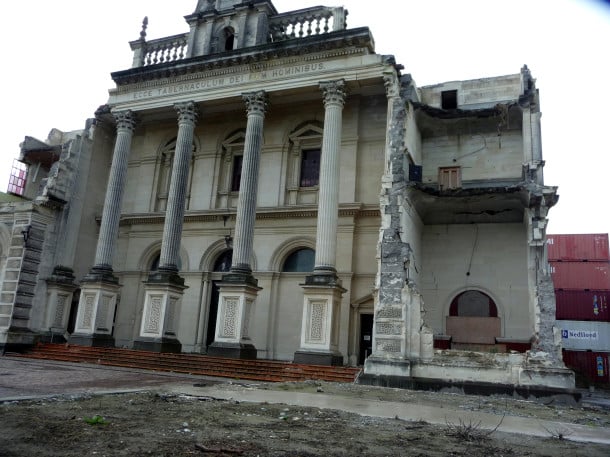 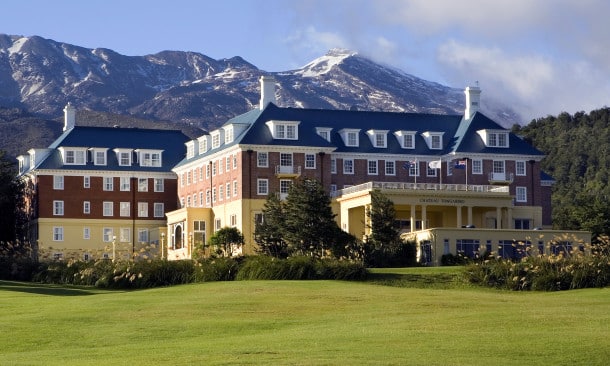 3 Comments On "North, South, above, and below in New Zealand" 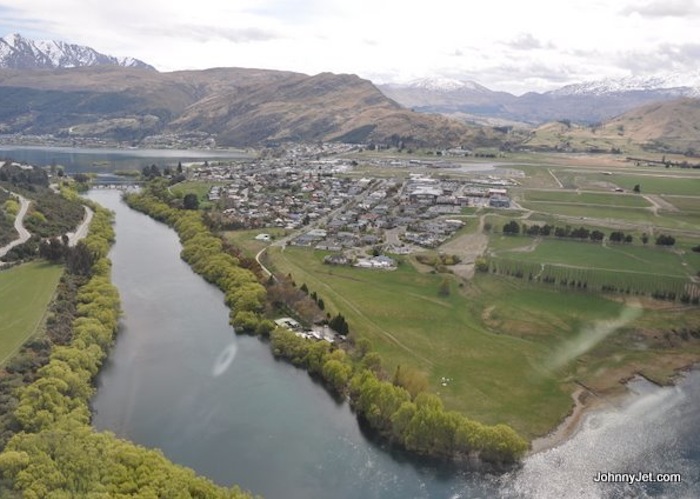 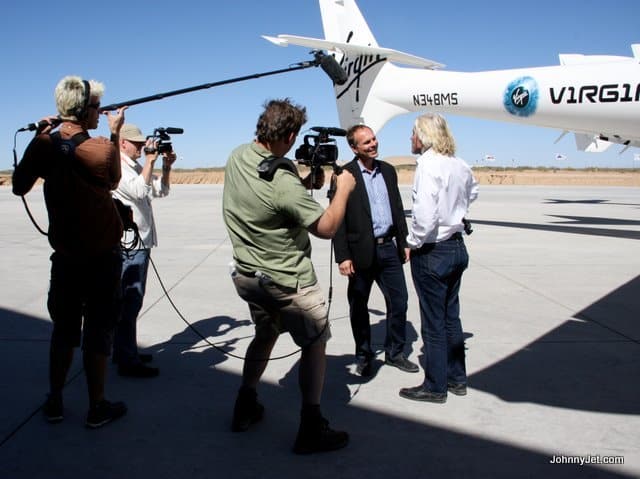