Orcas and Eagles and Bears – Oh My! An Adventure on North Vancouver Island

Susan B. Barnes is a travel writer based in Tampa, FL. She enjoys all aspects of travel, from adventure to luxury, and everything in between. Visit her online at travlingirl.com, follow her on Twitter at @travlin_girl or check out her Facebook page.

Photos by Christy Woodrow of OrdinaryTraveler.com. 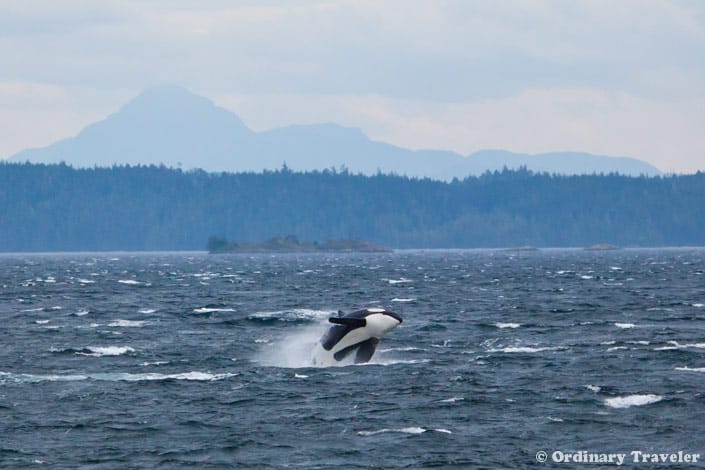 Orcas!
I’m an avid love of marine life, and one of the things I looked forward to most when cruising to Alaska a few years ago was catching a glimpse of orcas in their natural habitat. I did, and was quite thrilled. Yet not as thrilled as I was with what we saw on our tour with Stubbs Island Whale Watching. The pod of 15 or so that we came across didn’t disappoint—the show they put on was phenomenal, breaching and diving and showing their tails. I could have stayed all day, just watching in awe.

Unfortunately for us, the weather didn’t cooperate for the tour we’d arranged with North Island Kayak. It was our chance to glide along at water level and hope for humpbacks and orcas to emerge beside us. Oh well, just another reason to return to the island! 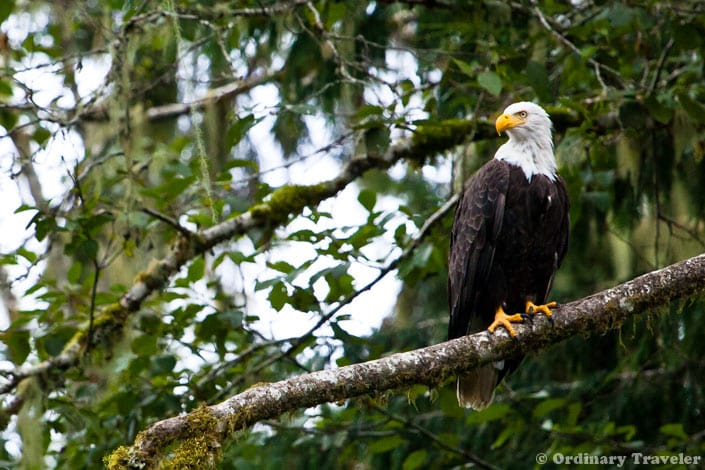 Eagles!
Bald eagles are as common on North Vancouver Island as seagulls at the beach, or pigeons in Trafalgar Square. Well, maybe not that common, but it’s pretty ridiculous. While it’s a rarity here in the lower 48 to see a bald eagle flying by, they’re an everyday sight on the island. In fact, when we stopped to watch a juvenile eagle learn to take flight on a sandy beach, a local stopped his truck and asked what we were watching.

When I told him, he pointed to a bare tree across the street from his house and said that he regularly sees 30 to 40 eagles hanging out in that very tree. I guess they’re a nuisance to some, but to us visitors, still incredibly majestic. 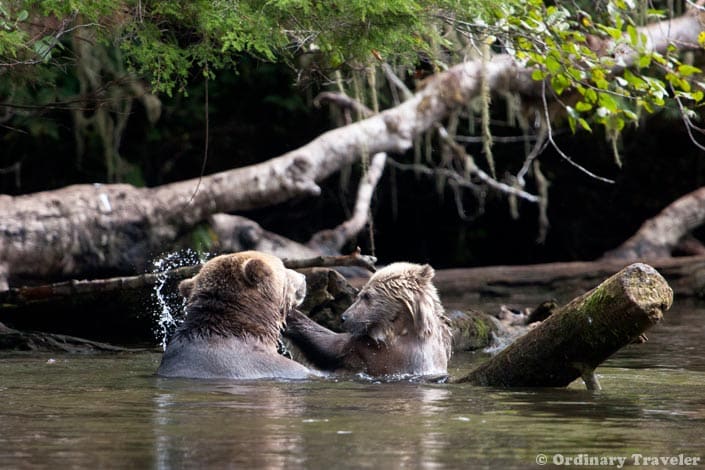 Bears!
With miles of wilderness, it’s no surprise that bears make themselves right at home on the island. In fact, as we left the car rental counter, the agent warned us about bears on the road at sunset, when they’re out foraging about for dinner. Bear warnings—great! Of course, we put ourselves right in the middle of the action on a trip with Tide Rip Grizzly Tours.

The well-trained and well-educated guides positioned our skiffs in the most prone position—perfect for viewing two brothers fishing in the river, and then two mama bears and their cubs feasting on salmon as they readied for their long winter’s nap. What magnificent creatures! 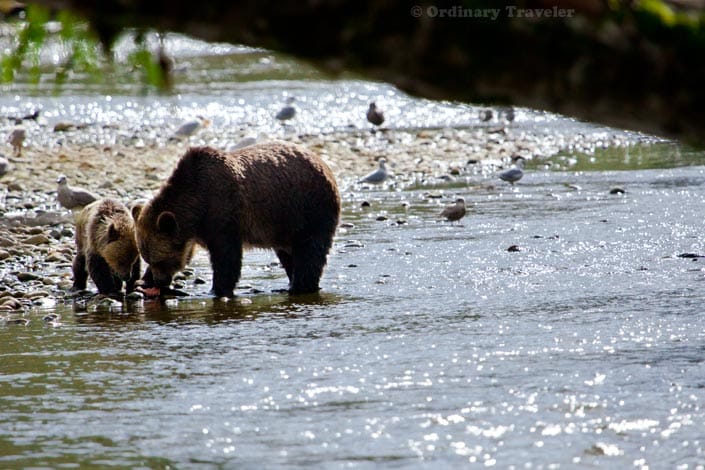 Grizzlies aren’t the only bears in the area, though. Hiking through Cape Scott Provincial Park to San Josef Bay and the sea stacks there (beautiful!), Cathy with North Island Daytrippers warned us that bears, cougars, and other wildlife make the forested park their homes. And no wonder—the dense vegetation, towering trees, and streams flowing throughout make it an idyllic wilderness home. On our return hike, we came upon three German tourists and let them go ahead a bit. When they stopped at a bend, mouths agape and one pointing at something beyond our view, I knew something was up.

Sure enough, a very large black bear was standing on the hiking path, looking back at us. For what seemed like forever, we stood looking at each other. He seemed to be posing for photos, though all of us were too awestruck to pull out our cameras. Cathy then lunged towards the bear, waving the walking stick she always carries (instead of popular bear spray, which requires the bear to be a bit too close for comfort to effectively use) and shouting, “Go bear! Go!” After some consideration, the bear lumbered off into the woods, and we continued on our way.

I can’t wait to return to North Vancouver Island for more fun and adventure—and wildlife!

2 Comments On "Orcas and Eagles and Bears – Oh My! An Adventure on North Vancouver Island"