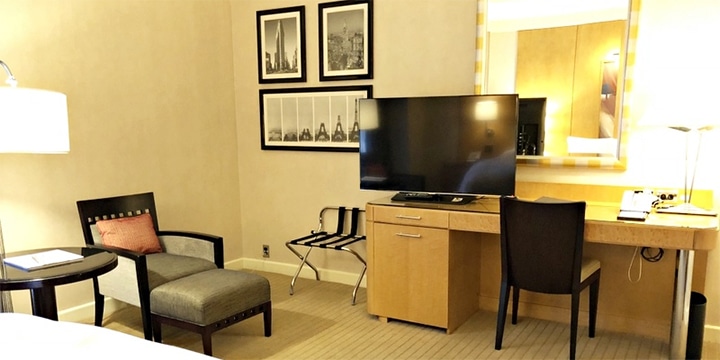 I’ve been fortunate to travel to New York City hundreds if not thousands of times, including three times in the last month. On two of those occasions, my family and I stayed at the Sofitel New York, which is conveniently located in midtown Manhattan at 45 West 44th Street. Full disclosure: Sofitel hosted us both times. 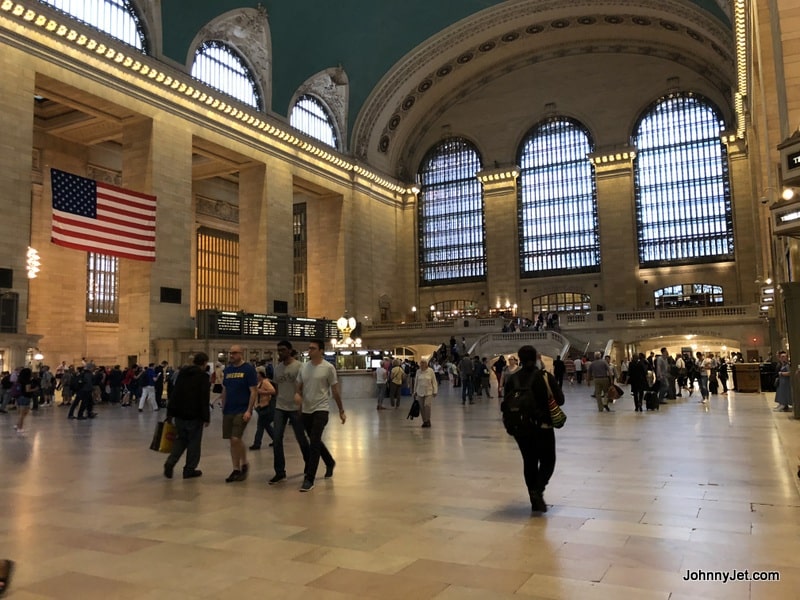 Grand Central to Connecticut
The Sofitel New York is just a few blocks from Grand Central Terminal (GCT), which I use regularly as I grew up in South Norwalk (SONO), Connecticut and still have family there. Metro North trains go between SONO and GCT at least every hour.  TIP: Download the MTA app and buy tickets before jumping on the train so you don’t have to stand in any long lines or get dinged an extra fee for buying on the train. 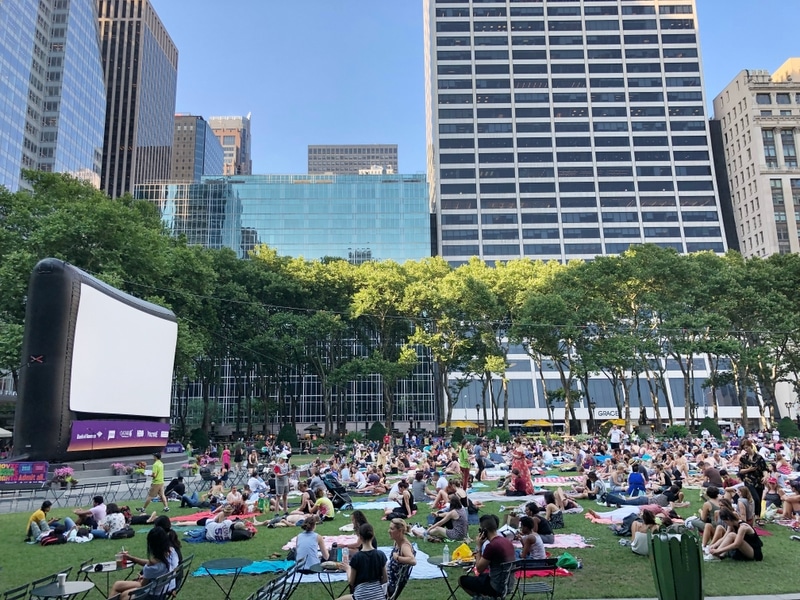 Nearby Points of Interest
Another reason to love the location of the Sofitel New York is that it’s a short walking distance to Bryant Park, the New York Public Library, shopping on Fifth Avenue, Rockefeller Center, Broadway and Times Square. Although Times Square is my least favorite part of New York City since it’s way too touristy and crowded it’s sometimes unavoidable. FYI: The photo above is of Bryant Park movie night, which is free and takes place every Monday night at sunset during the summer. Here’s more info. 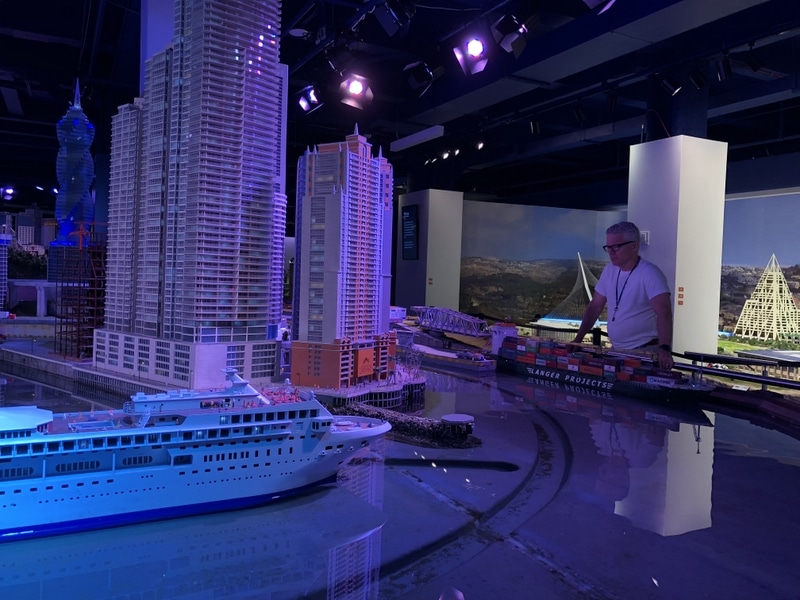 Gulliver’s Gate
My wife’s family was in town from Toronto and we took the kids to Gulliver’s Gate. It’s a really cool (though seriously overpriced) attraction in Times Square, just a six-minute walk from the Sofitel New York. They’ve taken landmarks from around the world and recreated them in miniature. Our favorite part was the world’s largest model airport. Everyone loved it but admission adds up fast ($36 for adults and kids 13+, $27 for kids 6-12). TIP: Ask the greeter at the door if they have any discount passes; they gave us $5 off each person. 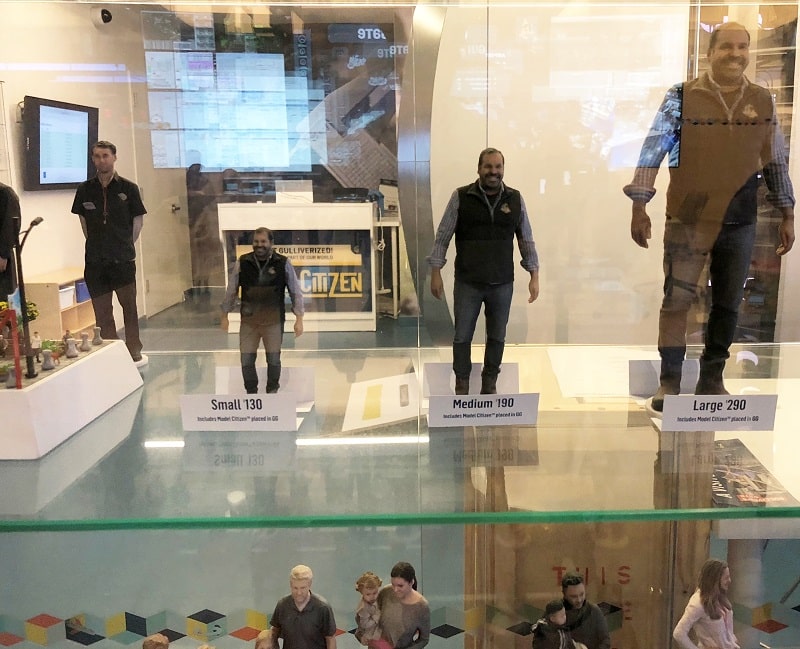 Get an Action Figure Made of Yourself
One unique thing to do at Gulliver’s Gate is get your very own action figure. They use a device that takes 120 photos of you simultaneously and then they send them away to be patched together. Prices start as low as $43 to be one of the thousands of figures in the display (a six foot tall person is 0.8 inches) or get larger doll for $130 or $290, depending on the size. I would’ve done it if I wasn’t dressed so casual.

This just shows the Sofitel New York’s great location and the fact that pretty much anything you can think of is right outside your door! Here’s a closer look at the hotel:

Peek Inside The Sofitel New York 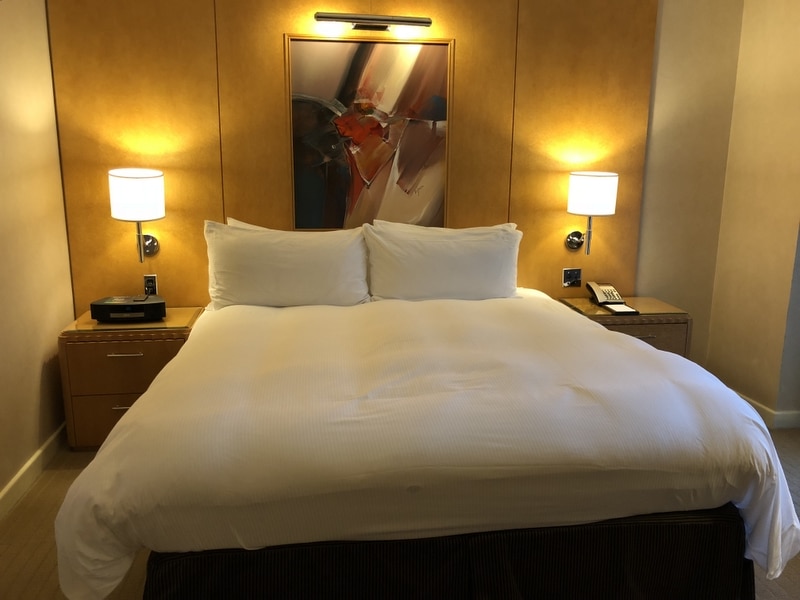 The rooms
The rooms at the Sofitel are done in an Art Deco style. There are 398 rooms on 30 floors, with 52 suites and one presidential suite. We have stayed at the Sofitel New York twice in the past month. The first time, we checked out the Tony Awards Suite, which was decorated with all kinds of Broadway paraphernalia and had an enormous, wraparound balcony with views of the Empire State Building. The second time, our room was much smaller but had everything we needed. The decor feels a bit out of date but the rooms are nice and comfortable and my wife loved the Lanvin bath amenities. 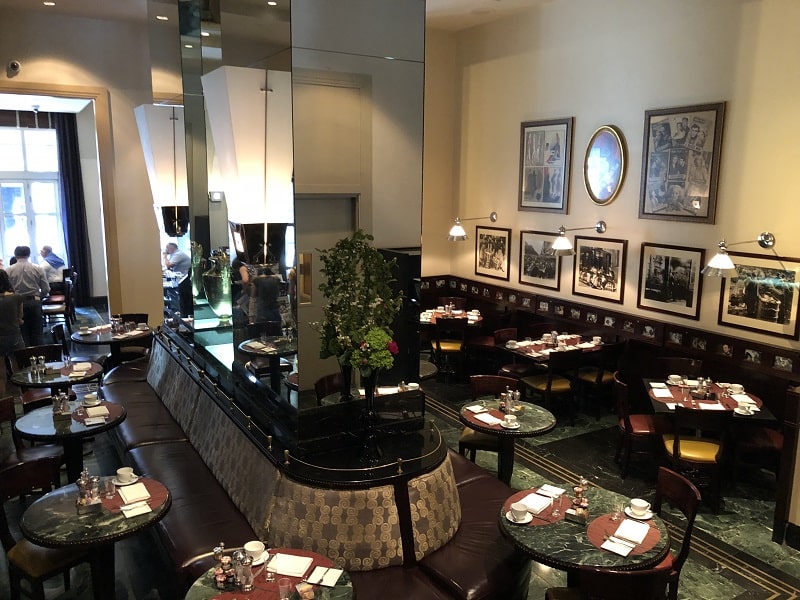 Gaby Restaurant
The on-site restaurant Gaby combines Art Deco style with Sofitel’s French roots. The French dining restaurant has a contemporary feel and every time we were there or just passing through, it was busy, especially the bar area, where guests love to sit with a cocktail and catch a game or the news. Whenever my wife and I are at a luxury hotel with our son, we are hyper aware of his behavior, not wanting to disturb other guests. But fortunately, the guests at the table next to us couldn’t get enough of Jack and our waiter, Benny, could not have been friendlier, chatting with Jack, playing with him and getting him whatever he needed. As we got to chatting with him, we realized that we were all headed to the same place in about an hours time: Connecticut. We had been planning to walk to Grand Central Terminal and hop on a train but Benny said his shift was over at 11am and insisted we drive with him instead of lugging our luggage and the baby all over the place. My wife and I still talk about Benny, how truly friendly and kind he was and how generous it was for him to offer to drive us all the way to Connecticut. We had a great time, great conversation in the car and have made a great friend. 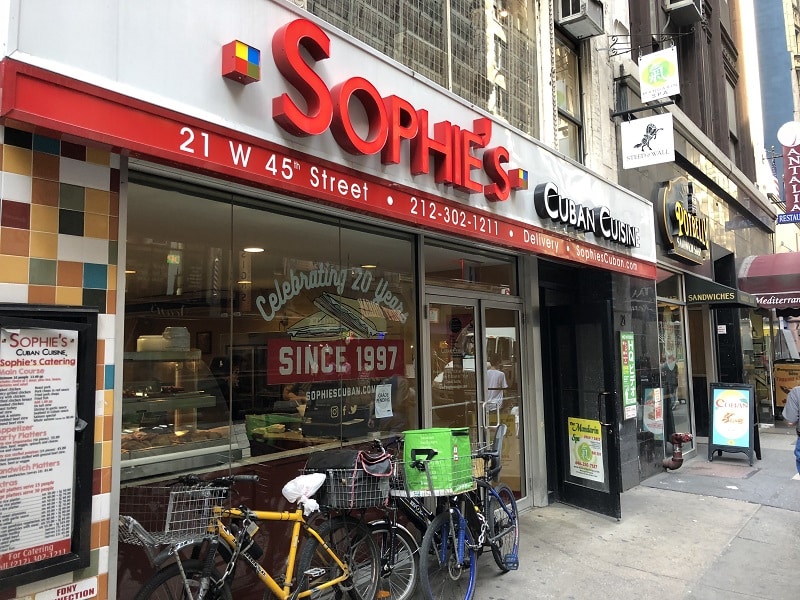 Nearby restaurants
If you don’t feel like eating at the hotel restaurant for every meal, there are tons of food options nearby – that’s the great thing about New York City! Pretty much any kind of food you want can be found pretty easily. Across the street from the Sofitel is a little Cuban place called Sophie’s Cuban Cuisine and we love the food there. It’s packed at lunchtime with locals stopping in for lunch so you know it’s good. I also love the fact that my 21-month-old son Jack loves the food, too, so it was handy to have something so close by that we knew he would eat (toddlers can be unpredictable!) My wife loved that there was a Starbucks just around the corner but note that the Sofitel does offer free tea and coffee right in the entryway of Gaby restaurant, which is nice and handy.  There’s also a Whole Foods a short walk away so you can pick up fresh fruit and veggies or hot and cold prepared meals and eat in Bryant Park if you feel like it. 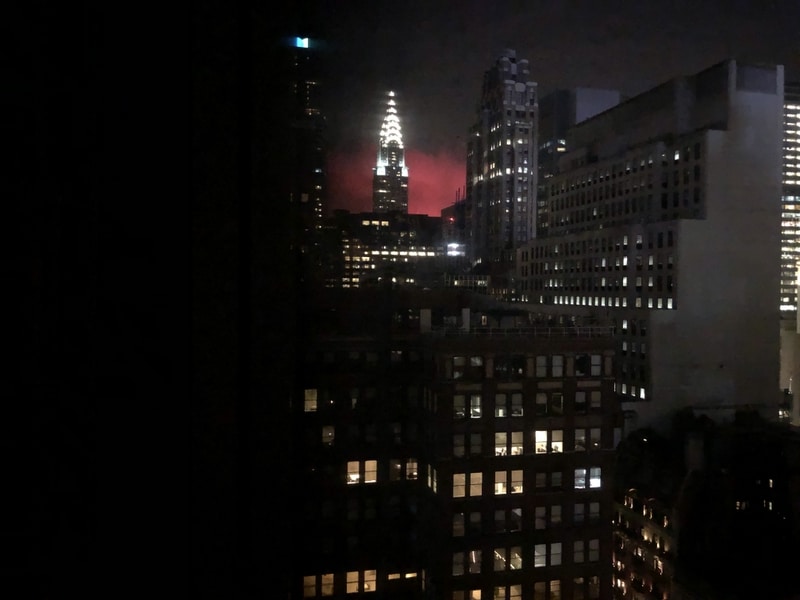 4th of July Fireworks
We were in New York during the latest heatwave and it was hot and humid. We had a 6am flight, which meant we had to be up at 3am and most importantly we have a 21-month-old who needs to go to bed early. So we decided not to brave the crowds to see Macy’s unbelievable annual Fourth of July fireworks show and to go to bed early. However, Natalie and I still caught a fraction of them as we were on the 22nd floor of the Sofitel and we could see the upper thirds of some of the shots. I wish I’d had a better camera on me since it was a surreal view looking out at them with the iconic Chrysler building directly in front. 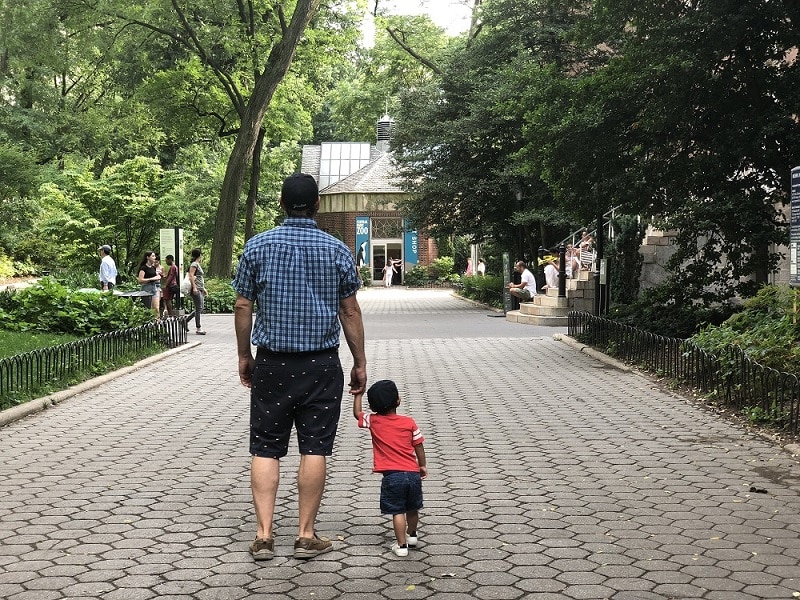 Central Park Zoo
We had a great trip to New York City and one of our random highlights was going to the Central Park Zoo for the very time. I’m not a big fan of zoos but this one is really well done and Jack and his cousin Aria absolutely loved it — even on a hot humid day.