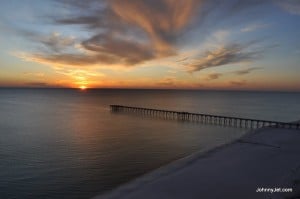 My girlfriend Natalie and I both got invited to speak on a panel in Panama City Beach, Florida, this past weekend. The topic was travel trends and how publicists/marketers can get the attention of a travel writer/editor. The hour-long presentation went really well, and instead of just flying in and out we decided to spend the weekend there–and we sure were happy that we did. Here’s how our trip went.

LAX to Atlanta
I began by flying Thursday morning from Los Angeles to Atlanta on one of Delta’s 777-200LRs that had just come in from Sydney. This is definitely the most comfortable Delta plane I’ve ever been on, and I wasn’t even in one of their phat herringbone business-class seats. However, I was in row 31, which is the first row in coach–a bulkhead–and had a crazy amount of legroom. Like on most Delta planes, there were individual entertainment systems, but this one had free movies and TV shows–I’m not sure if it was because I was in the Economy Comfort section or if it was because it’s an international aircraft that is strictly used on the Atlanta-LAX-Sydney route so their entertainment is free. The only thing it didn’t have that some of Delta’s other planes do was live satellite TV and Wi-Fi. Instead of working I ended up watching five travel shows (Globe Trekker, Samantha Brown’s Great Weekends, Anthony Bourdain’s No Reservations, Andrew Zimmern’s Bizarre Foods, and Dhani Tackles the Globe) on the four-hour flight, and none had annoying advertisements like many airlines show before their shows.

ATL AIRPORT
When I landed, Natalie was waiting for me at my gate, since she had come in earlier from Toronto. We had a 90-minute layover in ATL, so we went straight to Paschal‘s to grab some southern grub for lunch before getting on our 45-minute flight to Florida on a Delta regional jet operated by ASA. ASA flies one of those uncomfortable CRJ200s, but luckily the flight was short so it wasn’t bad at all–though nothing like the 777.

PANAMA CITY AIRPORT
When we arrived we switched our clocks back an hour (Panama City is on Central time) and marveled at how nice the Panama City Airport (ECP) airport is–it’s just a couple years old. Even though it’s up in the boondocks of northwest Florida, they have great signage, so it makes the 17-mile drive to Panama City Beach easy as can be. Plus it’s just a few turns. FYI: We rented a car from Hertz and passed on paying $14 a day for a Hertz Neverlost GPS system, which was a wise choice because the area is really easy to get around.

Sterling Reef
We were excited that they put us up in a really comfortable two–bedroom, two-bath apartment at Sterling Reef (12011 Front Beach Road, Panama City Beach, Florida; Tel.: 850-230-6110). It came complete with a fully equipped kitchen, a living room and even a washing machine and dryer. The best part was the view from our balcony, which was on the 14th floor (it was really more like the 17th floor because the first few stories are dedicated to parking).

Panama City Beach
If you haven’t been to the Florida Gulf, their sand is seriously some of the nicest in the world. The only place that might have nicer sand is Whitehaven Beach and the Lake MacKenzie beach on Fraser Island, both of which are in Australia. The sand in all three of these places is squeaky clean (it really does make noise when you walk on it) and we took a stroll each day even though it was unseasonably cold (temps ranged from 33F to 62F). Here’s a link to their current 10-day weather forecast to get a better idea.

M. B. Miller County Pier
Right next to our building was the M. B. Miller County Pier. They charge $2 per person to be a spectator and $6 to fish. It’s the first time I ever had to pay to walk down a pier, but it was well worth it: the views are gorgeous and you can watch people fishing. We saw a few bringing in baby bluefish and even a stingray. One fisherman told us he was using the blues at bait to get a tiger shark because they are good eating. I had no idea but was glad we didn’t encounter any of them. Speaking of stingrays, from our balcony we could see schools of them swimming along the shoreline–it was so cool. FYI: There were no signs of the tragic oil spill, and multiple people told us business is rebounding. 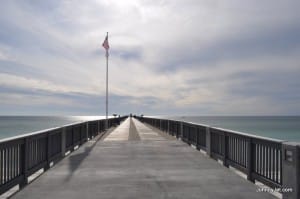 Panama City Beach caters to a mid-market clientele mostly from Alabama. When I told my southerner friends I was going down there, they said, “you are going to the Red Neck Riviera”! I guess that’s the nickname of the area, and when we drove from the airport to our place we could see why. We passed names of restaurants like Boondocks, Tootsies, Hooters… and then a bunch of really cheesy T-shirt shops. But we didn’t meet any rednecks. Instead, we met some of the nicest people I’ve ever come across in America. Besides the beach and the low cost of visiting, the people are what make Panama City Beach special.

Holiday Lights
It really is amazing how nice the folks in Panama City Beach are. The first place we experienced it was when we walked around their Fun for the Holidays attraction. It was located directly across the street from our building–actually, they used ours for one of their light shows. It cost just $5 to enter and they had live music, all kinds of Christmas decorations, a really good-looking Santa Claus (and Mrs. Claus) who had one of their helpers take a picture of you for free (they posted it on their website), free transportation, and skating for kids (it wasn’t real ice). The best part is that everybody we walked by wished us the most genuine Merry Christmas ever. That doesn’t happen very often these days. 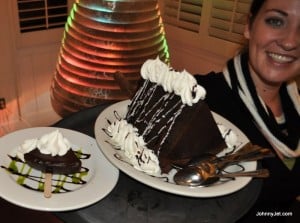 A huge attraction about Panama City Beach is that most of the restaurants are very inexpensive compared to L.A., New York, and Toronto (the three cities I visit most). Our dining highlights were:

Dinner at Boatyard: About a five-mile drive from our apartment took us to the Boatyard restaurant, which is located on a grand lagoon (it’s accessible by both land and sea). They serve fish tacos, fried oysters, king crab, Gulf Grouper, landlubbers’ dishes, and all kinds of other goodness like sushi. I had surf and turf with a side of gouda cheese grits. Be sure to try the chocolate-dipped Key lime pie, which is ridiculously good. Boatyard (5323 North Lagoon Drive, Panama City, Florida; Tel.: 850-249-9273).

Dinner at Firefly: We didn’t think the restaurant would be that great since it’s located in a strip mall, but we were wrong. The food is good, staff is friendly, and it has a romantic atmosphere. There’s a huge fake tree in the middle of a courtyard which will make you do a double-take at night to see if it is real or not. I loved how they use cut-off wine bottles as candleholders and that they serve pineapple butter with the bread. I had the chicken tortilla soup and filet mignon while Natalie had the scallops. Firefly (535 Richard Jackson Boulevard, Panama City Beach, Florida) 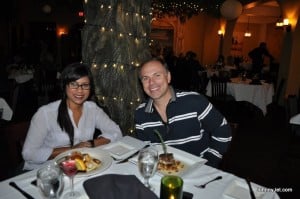 Brunch at Liza’s Kitchen: On Saturday morning we went to Liza’s Kitchen for brunch. They only serve breakfast dishes on the weekend–they normally open at 11 a.m. during the week, but they open at 9 a.m. on weekends. The food is good and cheap, which is why there’s almost always a line out the door. The service is quick and friendly, which is another reason it’s popular with both tourists and locals. Everything is made from scratch here, including focaccia bread, soups, and salad dressings. I had the breakfast burrito, which wasn’t short on spice, and Natalie had the French toast. I also couldn’t pass on a glass of Mello Yellow since I hadn’t had that since I was a kid–I think it’s Mountain Dew. They have free Wi-Fi and close at 4 p.m. In case you are curious, Liza is the name of the owner’s daughter. Liza’s Kitchen (7328 Thomas Drive #L, Panama City, Florida; Tel.: 850-233-9000)

Dinner at Saltwater Grill: Only about a mile from our apartment was the Saltwater Grill, which is also popular with tourists and locals. They have a 25,000-gallon saltwater aquarium in the center of restaurant which really adds to the ambience. The staff here are also super nice and they decorate the place so it was very festive. It’s no wonder there were so many Christmas parties/dinners going on at the tables around us. We sat in the corner and enjoyed the live pianist and of course the food. I had hickory-grilled filet mignon and blue crab for my main. My starter was a cup of their ham and black-eyed pea soup which was so good I wished I had ordered a bowl. Natalie had the tuna and scallops. All from the Gulf and quite tasty. Saltwater Grill (11040 Hutchison Boulevard, Panama City Beach, Florida; Tel.: 850-230-2739

Waffle House: It seems Waffle House is as popular in Panama City Beach as Starbucks is in New York City. We saw one on practically every other block we drove by, so we had to stop on the way to the airport. There’s one right near the last gas station before the airport on the corner of 90 and 79 It was so cheap, and when we left I told Natalie the staff there had to be the friendliest out of any diner I’ve ever been to. Natalie agreed. BTW: Natalie had a waffle, and she said it was good but she was disappointed they didn’t serve real maple syrup–just like a real Canadian would. I had a breakfast sandwich and a side of hash browns (you can add your own ingredients for 35 cents each so I had onions, cheese, and jalepeños). Good stuff and the bill was just $11, including a tea.

Other Panama City highlights included:
Getting a couples massage at Serenity Spa, Wyndham Bay Point: This used to be a Marriott but recently changed hands. I was impressed by how nice the men’s locker room was, their facilities like a sauna and steam room, and the quality of the masseuses. Afterward we had lunch out by one of their pools provided by the hotel’s restaurant Kingfish. Wyndham Bay Point (4114 Jan Cooley Drive, Panama City Beach, Florida; Tel.: 850-236-6000) 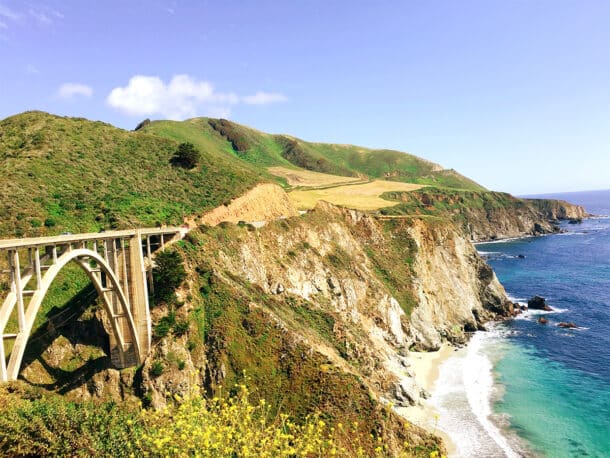 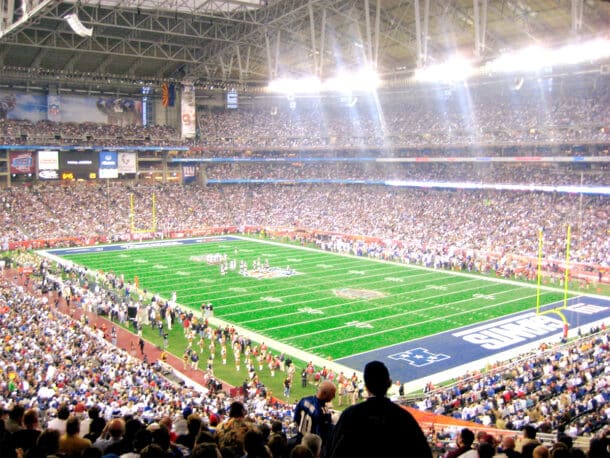 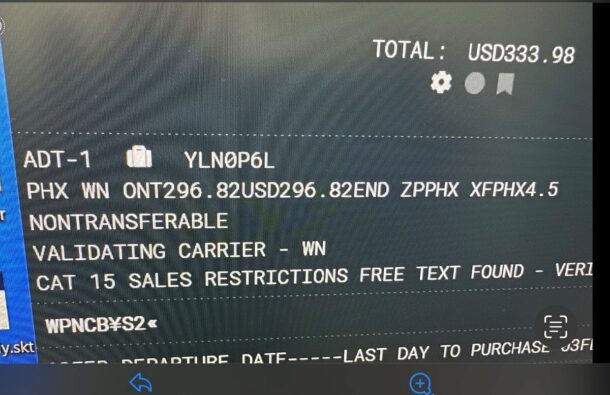