Inside the Private Suite at LAX, the U.S.’s Most Exclusive Airport Lounge

When the exclusive Private Suite at LAX (Los Angeles International Airport) opened in 2017, I obviously really wanted to check it out. After all, it was created and funded by Gavin de Becker & Associates, a security and consulting firm that protects many of the world’s most prominent people.

Saying it’s not cheap is an understatement. The cost of the Private Suite service is $3,500 for travelers flying domestic flights and $4,000 for those on international flights. Both fees cover access for up to three passengers. Annual members pay about $1,000 less per flight, and anyone can become a member for a membership fee of $4,500 per year. However, the group just started working with United Airlines, significantly reducing the price for first-time users. More on that in a minute.

At $3,500/flight for a private suite (shared lounge access is slightly less at $2,000/$2,500 per domestic/international flight), they don’t let any riff raff in. You have to sign an agreement to not take pictures of the public spaces, in case you run into a movie star (so there’s no asking for a selfie, but note that you most likely won’t run into anyone because the suites inside are all private). Once you sign up with all of your personal information including flight details, pay (full disclosure: I was given a free pass to review it), and forward a scan of everyone in your party’s passports, you’re given directions to the entrance.

The entrance to the Private Suite is the same as the one to the Flight Path Museum but once you’re through it, you take a left instead of a right. There are a number of things that make the LAX Private Suite great, especially the security, privacy and comfort. For starters, it’s directly across the runway from Tom Bradley Terminal. Once you arrive to a nondescript security checkpoint (you’re supposed to call when you depart your house/hotel and then again five minutes before, but no one answered my calls), you’re greeted by a couple of greeters. 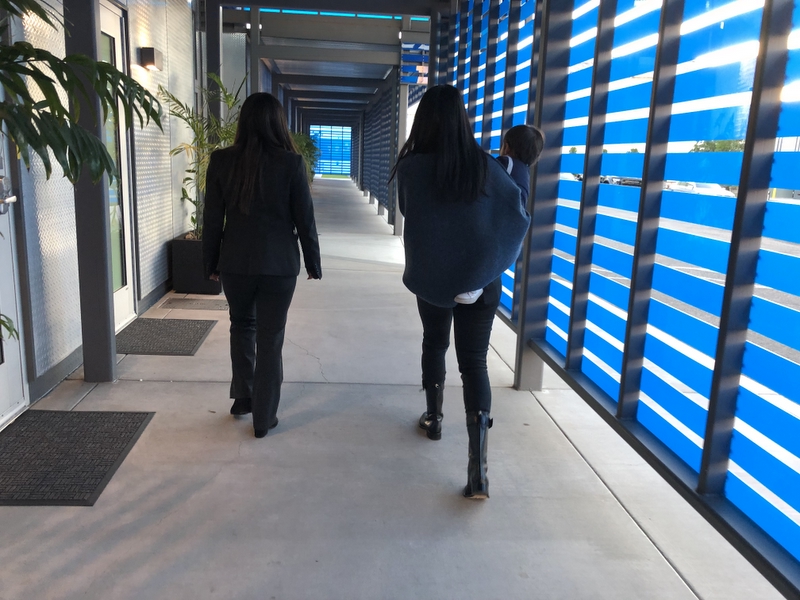 One greeter takes your luggage while the other escorts you to your suite. I saved my visit for when my mother-in-law would be traveling with us so I could earn some much needed son-in-law brownie points. It definitely worked as I could see in her eyes how impressed she was with the suite!

Below is what it was like in photos, starting from when we arrived at LAX at 6:15am on December 15. (We experienced the Private Suite before departing, but you can also use it when you arrive at LAX. This would be huge for those who don’t have Global Entry, because you clear immigration in the suite after being driven over the tarmac.) 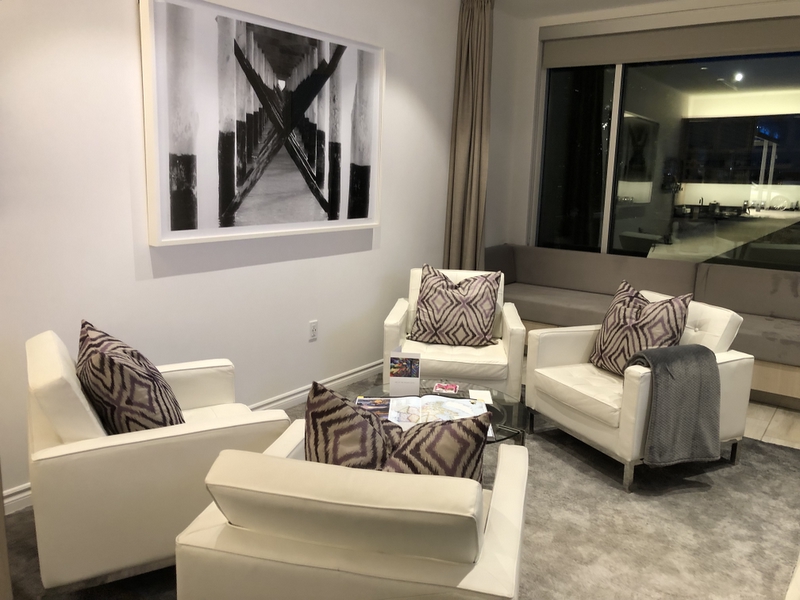 The private suites are tastefully decorated and about the size of a small hotel room. 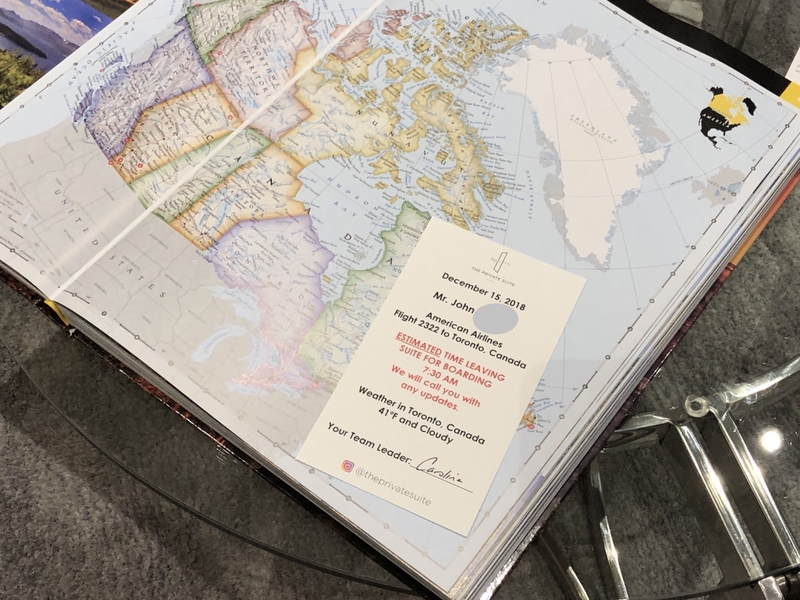 On the coffee table was a National Geographic atlas opened to the page with the country we were going to (Canada). There was also a note with my name, Toronto weather, our flight info, and the time we would be leaving the suite. 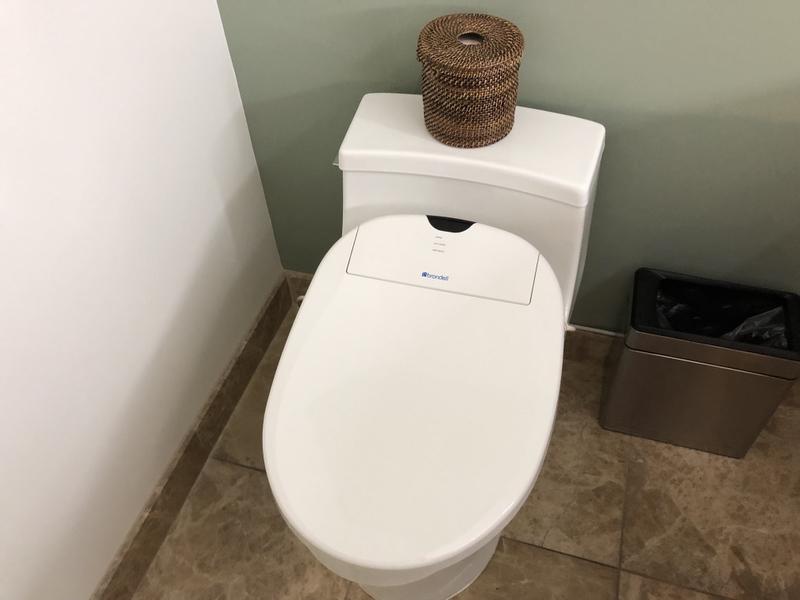 Each suite has its own bathroom with a fancy toilet like the ones commonly found in Japan that I just love! It has a heated seat and all the fun bidet functions. 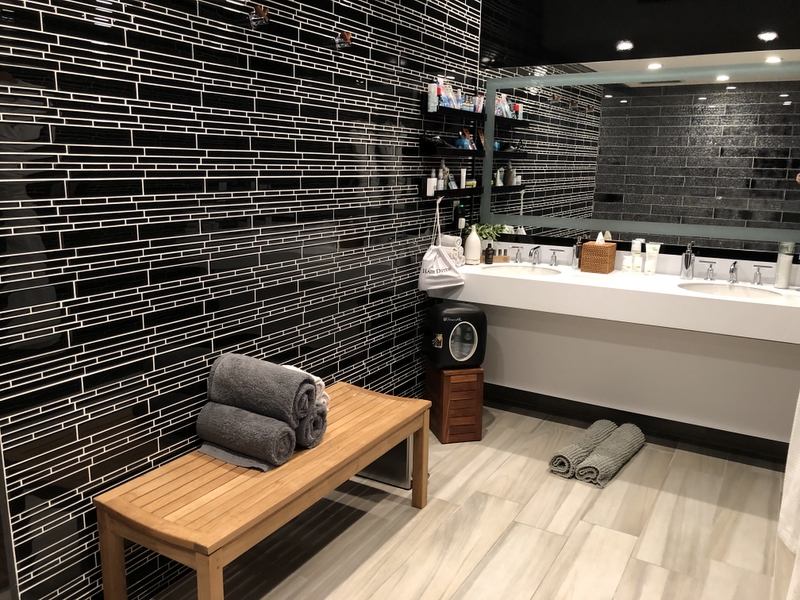 There’s no shower in your private suite but there is a swanky one down the hall which can be arranged for your use. 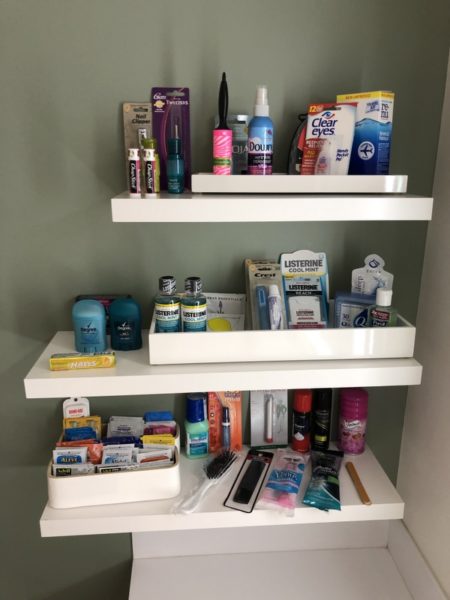 Back in the suite, the bathroom has all the toiletries you could ever imagine, including a styptic stick. Any or all of it is free to take. 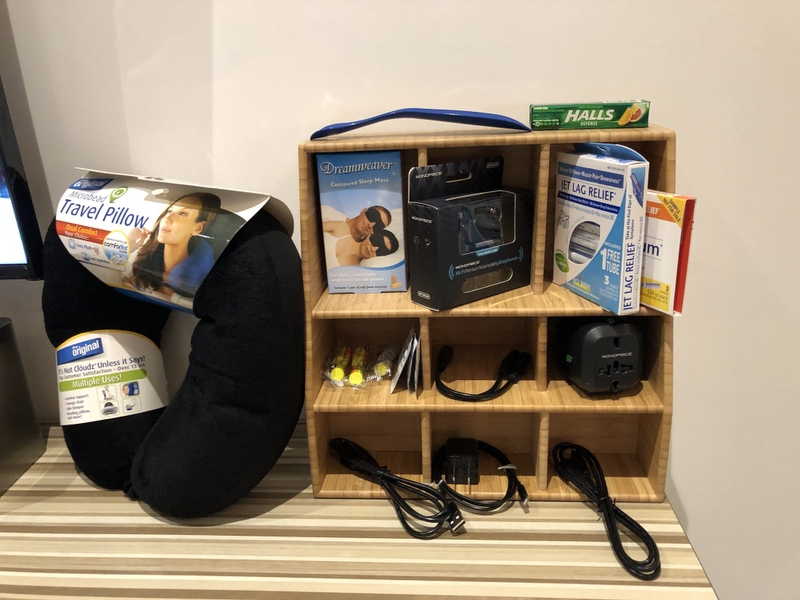 Speaking of amenities, the suite is tricked out with them. It’s almost like being in an airport convenient store. There’s everything from phone chargers to neck-pillows, and again, everything is free to take if you need it. 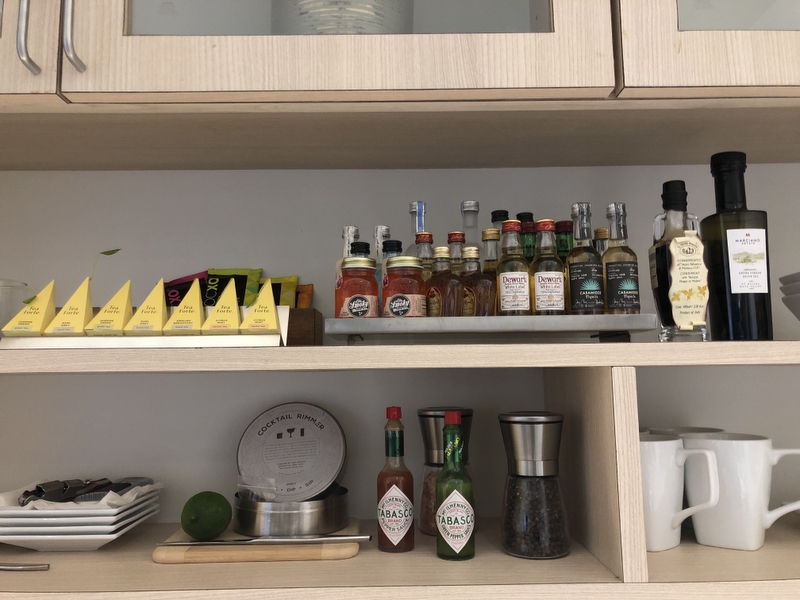 There’s also a food service pantry with all kinds of treats from chocolate bars to cereal (we were there in the morning). 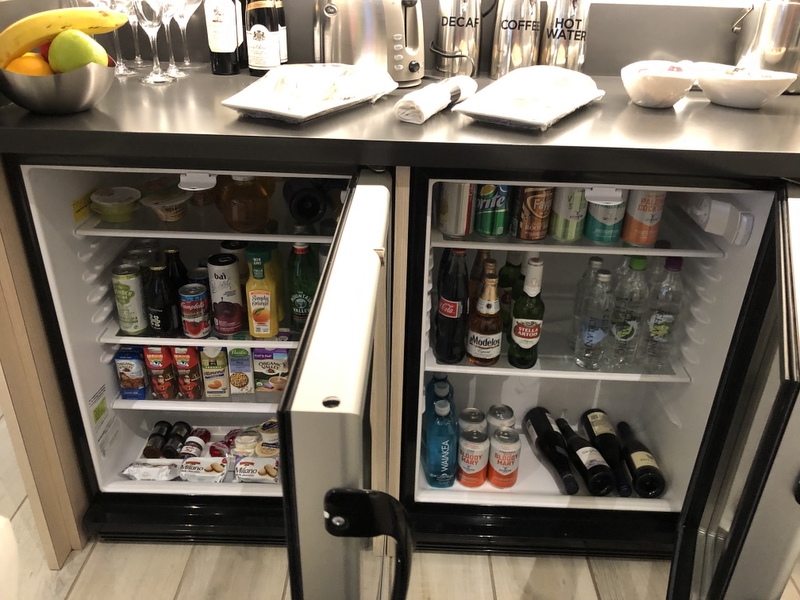 There are two fully stocked mini-fridges. 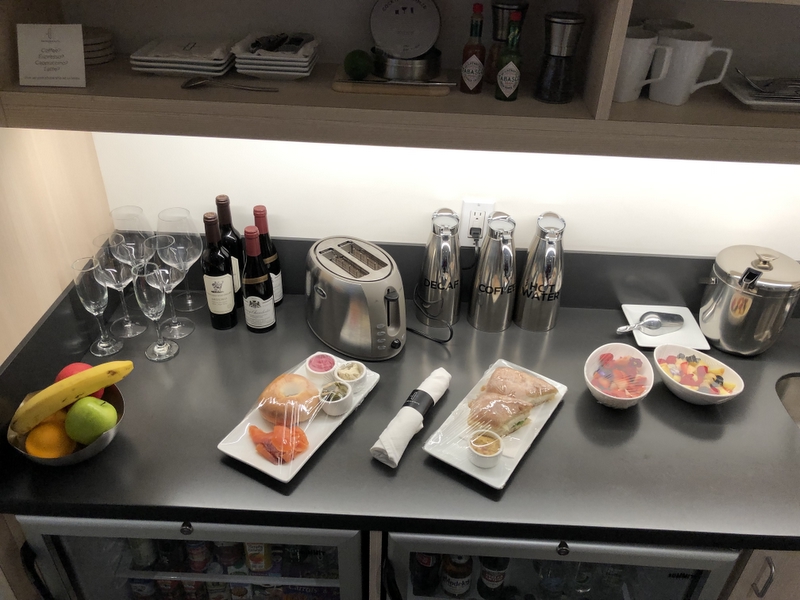 They also send a menu in advance so you can have food waiting for you when you arrive. It comes from Wally’s in Beverly Hills. Since it was morning, we just ordered some fruit, a bagel with salmon and a turkey sandwich. 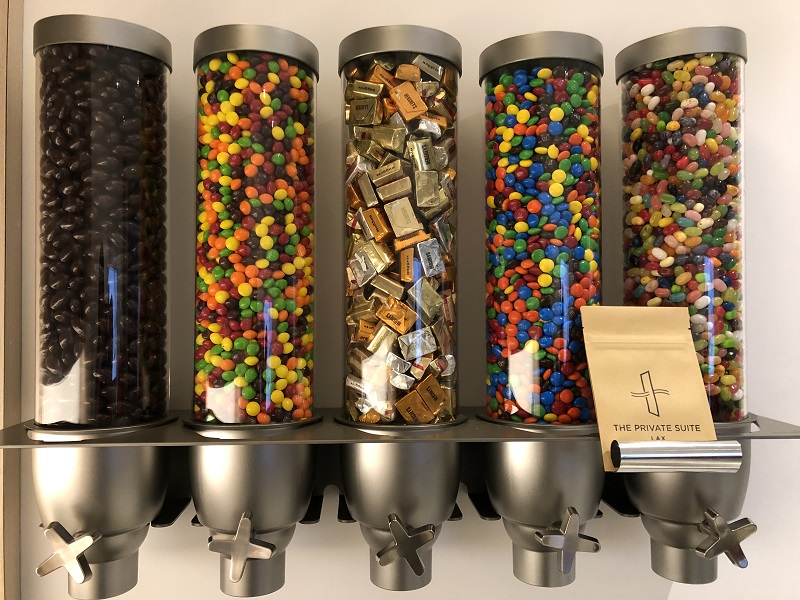 If you have a sweet tooth, there are candy dispensers filled with Hershey’s, M&Ms, chocolate covered almonds, jelly beans and Skittles with to-go bags. 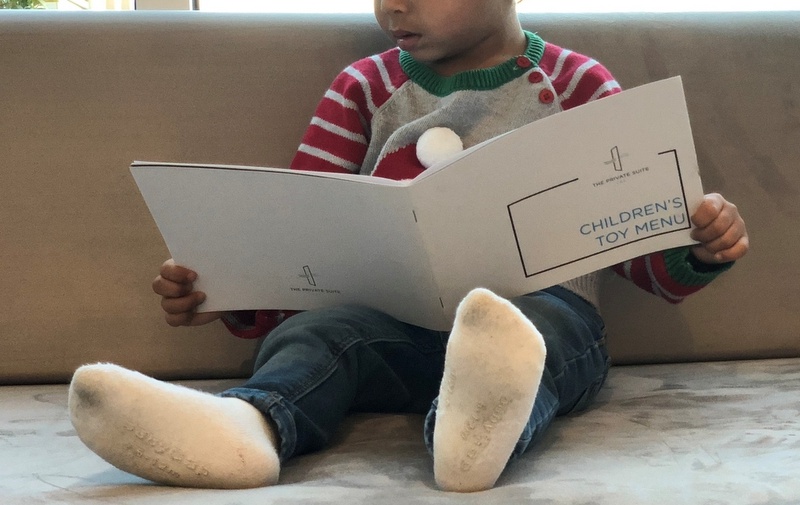 The Private Suite is very kid-friendly and kids will love the Toy Menu. Yes, there’s a toy menu! Just browse through it and call the concierge to let them know what you want. Again, there’s no charge. 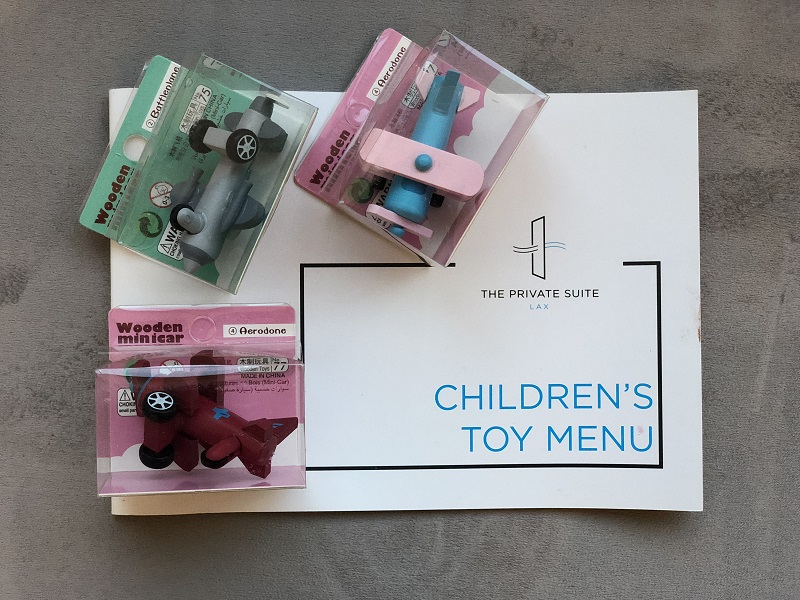 We picked the wooden planes made for toddlers. They come in a package of 12 so we will donate most of them. They break pretty easily, but then again Jack is like the Tasmanian Devil. 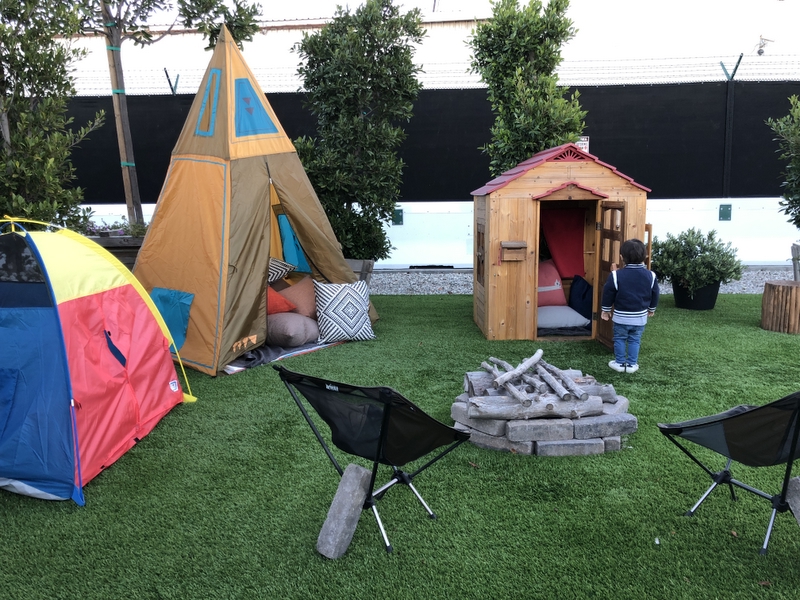 If you want space for kids to run around or just need to get some fresh air, there’s a section outside near where you pull up, with astro turf and a tasteful kids play area with houses and a tent. There’s also a putting green for older kids. 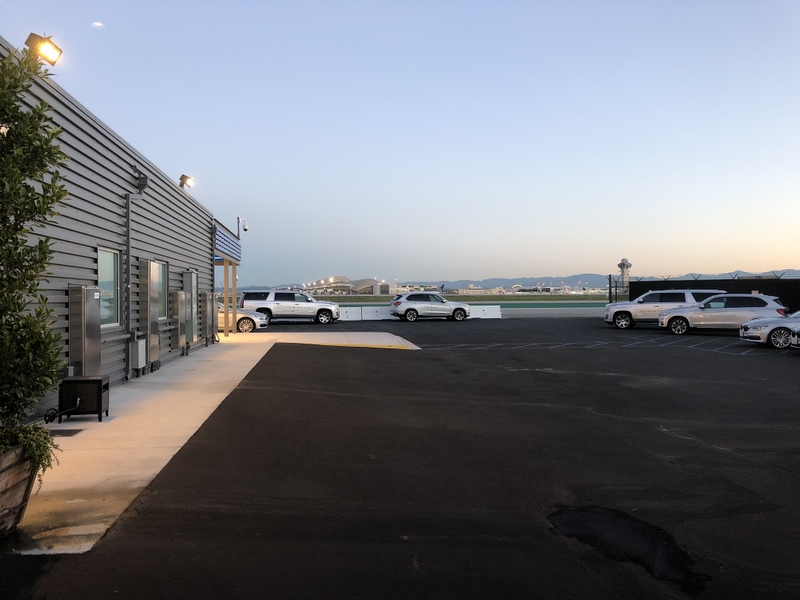 Most of the suites have a great view of the runway so aviation geeks will love it. 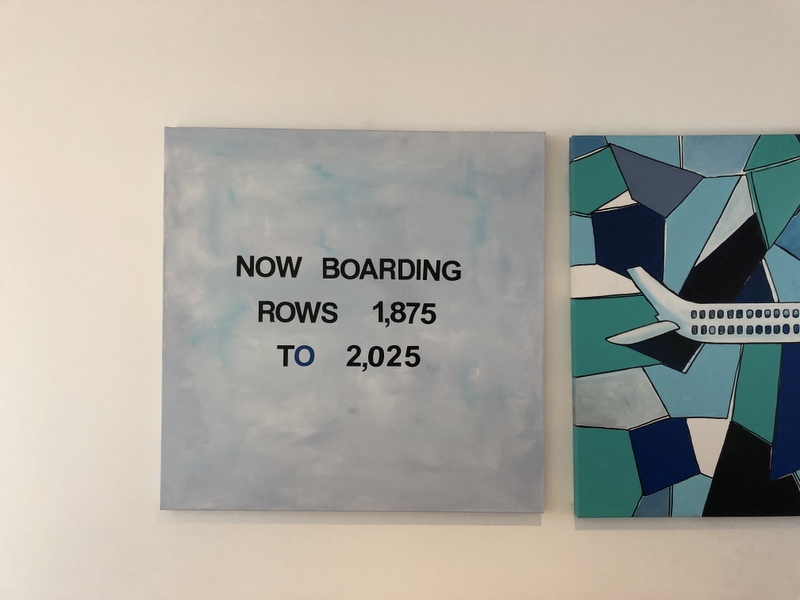 When it’s time to go, you’ll be escorted to your very own TSA checkpoint. It’s in the same building as the suite and they bring three agents over; it’s just like going through regular security, minus all the people. We were the only ones there. Since my mother-in-law doesn’t have PreCheck, she had to take her shoes off. I couldn’t take a picture of the checkpoint area but in the lobby nearby was the painting above, which I thought was hilarious. 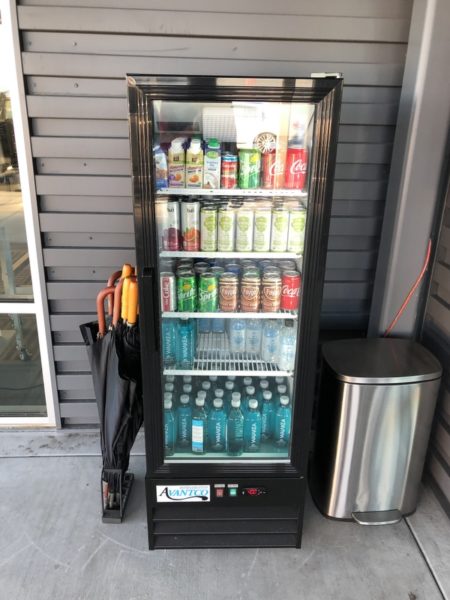 I asked if there was a way to take one of the bottles of water from the suite to the plane and was told no. But they do have a stocked fridge post-security for guests to take whatever they like. Score. 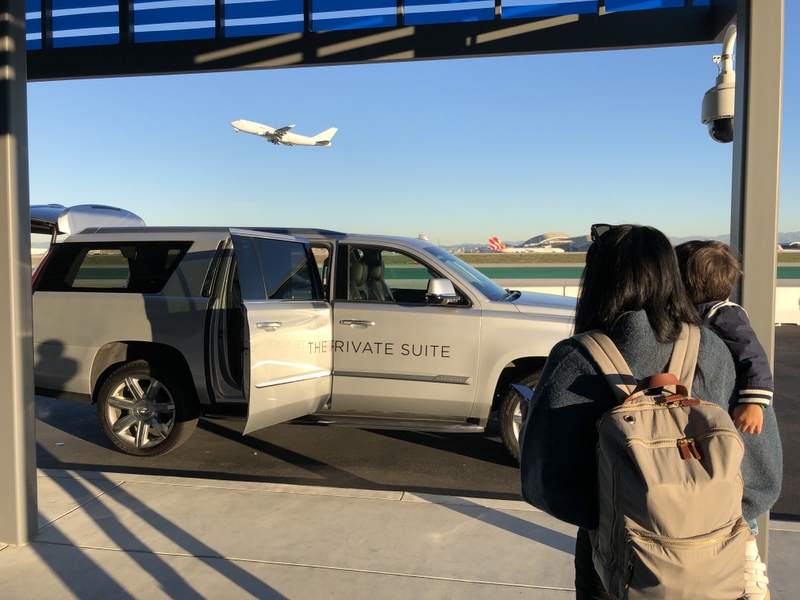 On top of that, the cars that they drive you to the plane in are all stocked with bottled water. That’s right: You get to the plane by private car—usually in a BMW 7-Series sedan, but since we were a party of four, we were escorted in an SUV. 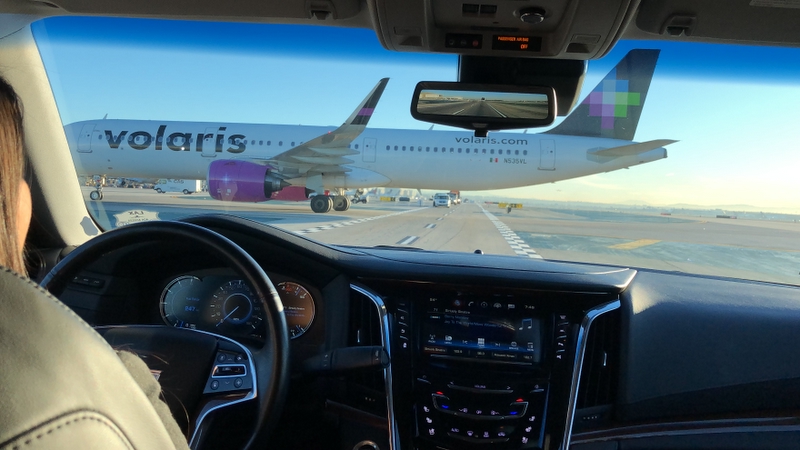 The views of the runway are insane. As a budding AV geek, Jack was on cloud nine…as was I! 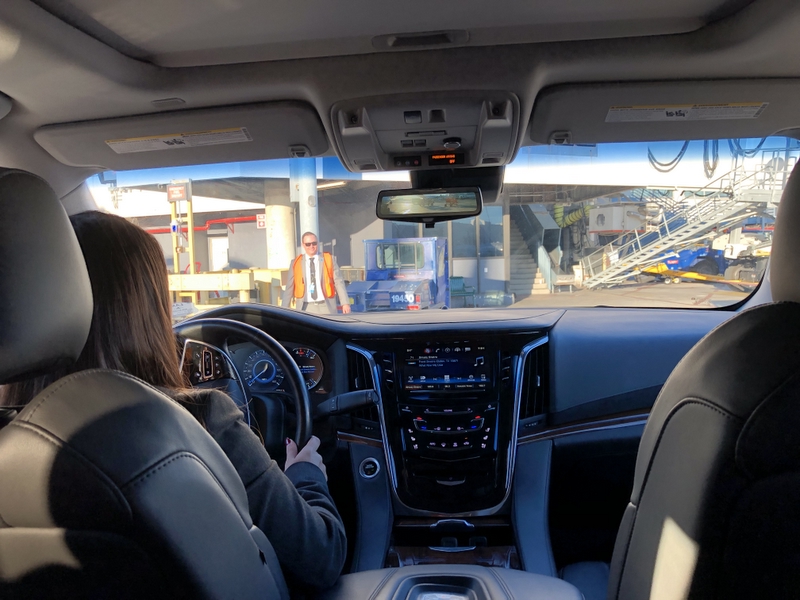 Once we arrived to our gate, the Private Suite team told us to sit tight as we waited for boarding to commence. They had asked us earlier when we wanted to board and I chose in the beginning of the process because we were in the bulkhead and I wanted to make sure we could store our bags above us. Otherwise, we would have gone last as I’m sure the celebs do.

FYI: At LAX, it typically takes a passenger 2,200 footsteps to get from car seat to plane seat. For members of the LAX Private Suite, it’s 70 footsteps! 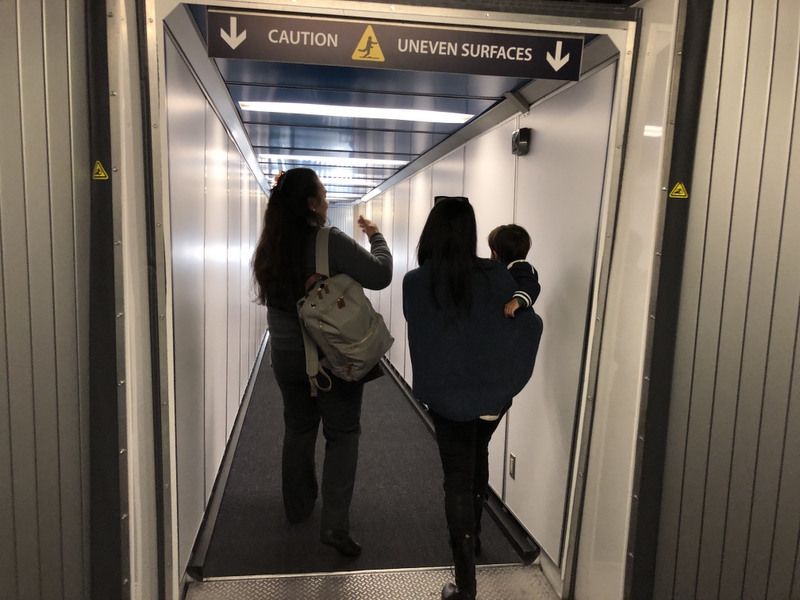 The company has agreements with all the airlines, so they work with them all. I was amazed because I fly American Airlines often out of LAX and I’ve never had the kind of gate service we had on this trip. The gate agent took our bags and escorted us on after the pre-boards (those in wheelchairs).

It was amazing, and now I just need to figure out how I can do it again the next time I fly with my mother-in-law! 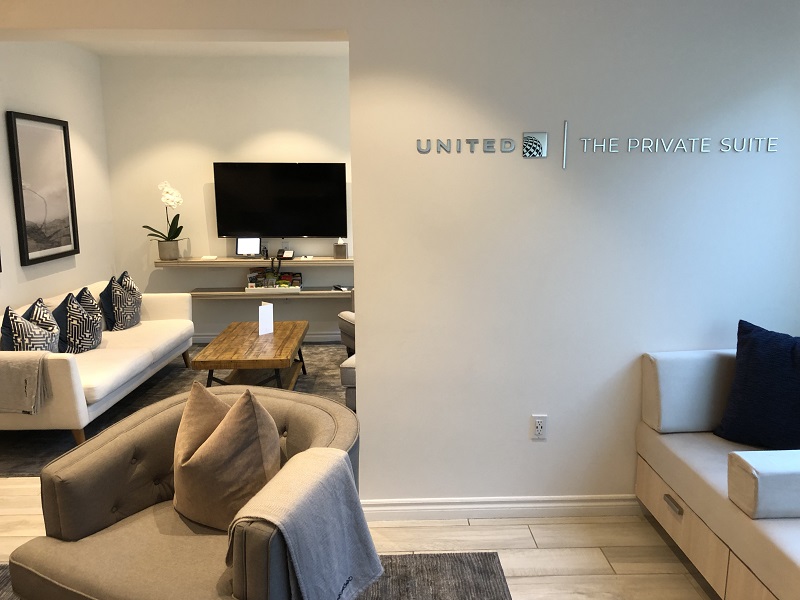 How to experience the Private Suite at LAX for less with United
To experience the Private Suite at a much cheaper cost, United Airlines has a partnership with the until March 1, 2019. First-time visitors will be able to secure access for $375 one-way or $700 roundtrip for domestic flights and $500/$950 for international flights (again all rates include up to four travelers). You’ll be in a shared lounge if you go this route, so there’s a chance there will be other passengers with you, but you’ll have access to some of the amenities, though not all. You can make reservations and see more information on this page.

3 Comments On "Inside the Private Suite at LAX, the U.S.'s Most Exclusive Airport Lounge"