Geoff is a personal finance and travel writer and editorial strategist. His work has been featured on Forbes, HuffingtonPost, TechCrunch, Hyatt, CreditCards.com, CreditSesame.com, and Inc.com.

Today I’ll be reviewing one of the longest flights in the world. I recently flew First Class on Qantas from Dallas to Sydney on the A380 Airbus. We made this booking with American Airline miles and it was only 145,000 miles and $55.60 for both of us. Some of the best miles I’ve ever spent since this flight would’ve easily cost over $10,000 per ticket.

We were really excited to fly Qantas First Class and enjoy the A380 Airbus again. And to be flying a non-stop route to Australia! That’s hard to come by. This is one of the longest flights in the world at just under 17 hours (I didn’t mention that to Jordan), but it was a great experience. Well, except for the guy dramatically throwing up on landing.

Anyway, here’s my review of the First Class on the Qantas A380.

We were flying out of DFW at the international D terminal. There was no one checking in when we arrived, so we quickly breezed through check-in and security.

The American Express Centurion lounge is located in the D terminal and was only a few steps away from our gate. 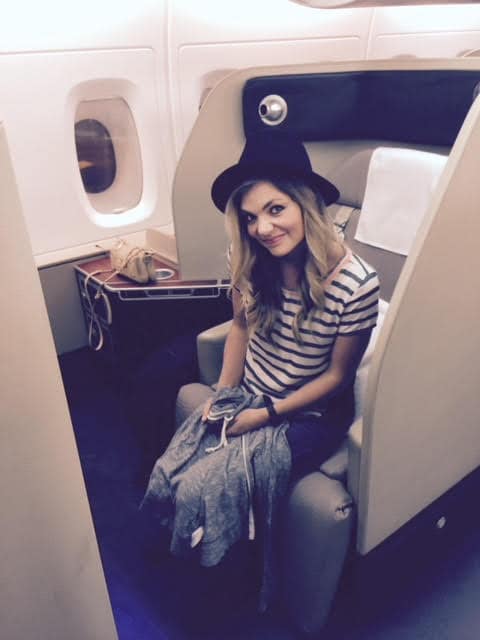 There’s no doubt that the Centurion lounges are the best appointed domestic lounges, but they’re often overrun with people. The spa was closed when we arrived, so we just grabbed a quick snack and found a nice quiet place on the right side of the lounge. Love the chairs.

I went into one of their conference rooms and watched the NBA playoffs. Heartbreaking.

After spending an hour in the lounge, it was time to board the Qantas A380. Smiles all around.

We were quickly greeted and offered a welcome beverage. Yes, please.

There aren’t 2 seats directly together on the Qantas A380, so I selected 2A in the middle, and 2k on the side. The seats were very private and spacious. Jordan said it’s the most comfortable she’s ever been on a flight, and she has flown Cathay First and Singapore Suites. I couldn’t argue with her. 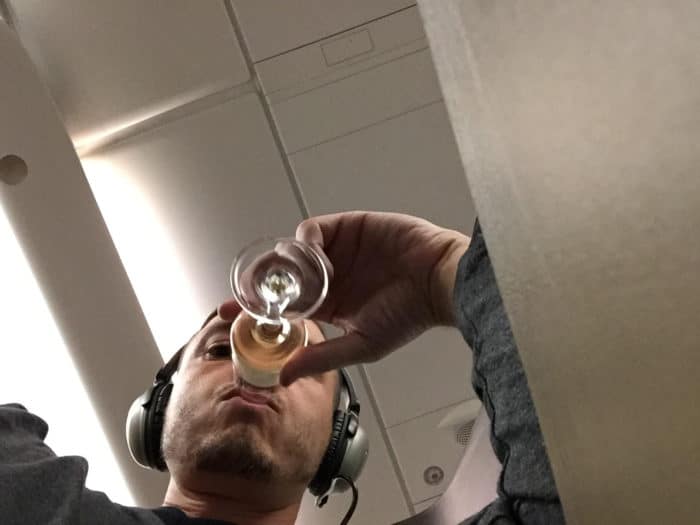 It’s hard to tell, but this might’ve been the most comfortable I’ve been on a plane too. I liked the simple design, and that everything felt new and spacious. Great hard product.

The entertainment screen was positioned at an angle, which made the area feel more spacious. The seat would swivel after take off so you could recline.

One weird element was the overhead bins. Being in the middle, I didn’t have a dedicated overhead bin, so I had to share with the person across from me who was luckily my wife. It would’ve been annoying for both of us if that wasn’t the case.

There wasn’t much legroom before I could swivel my seat after take off.

Sorry for the dark photos of the bed, but it was dark when we had turn-down service and I didn’t want to be the guy flashing photos. I found the mattress pad and seat to make a very comfortable bed. I easily slept 6ish hours.

I wasn’t expecting a Cathay or Singapore meal, but I was pleasantly surprised by our meal service. First of all, the Qantas first class staff was great.

It didn’t take long to get our welcome champagne, and another glass and canapes once we were at cruising altitude. The champagne was Taittinger Comtes de Champagne, 2000, France. Very nice.

For meal service, I went with the Giant Steps Pinot Noir from Yarra Valley, which was also nice. I started with the creamy asparagus soup. It was a solid way to start.

I was supposed to get my crab spaghetti next, but instead received my main –  the ricotta gnocchi. The gnocchi was good but very filling.

The Dungeness crab spaghetti was also tasty, but a little light on the flavor.

I’m not sure why I ordered dessert, but it sounded like a good idea. Ice cream and chocolate bread and butter pudding. Rich, so I could barely put a dent in it.

I did have Qantas famous steak sandwich for a snack a few hours after dinner, and it was really good as well. For breakfast, which was a couple of hours before landing, I went with muesli with yogurt and honey. Just a couple of my favorite things.

Of course, I also had eggs and bacon. Not too shabby.

Overall, the meal service was better than I anticipated. I’ve read many mixed reviews that curbed my expectations, so I was pleasantly surprised. The service and food were both really good.

The headphones weren’t Bose, but they did the job.

The TV screen was a good size, and the Qantas movie selection was definitely large enough for a 17-hour flight. I started with the good but creepy Night Crawler.

There was a touchpad control screen, but I ended up using the handheld controls unless I was adjusting my seat.

I gotta say, the PJs were extremely comfortable. I changed into mine within 3 minutes of being on board, but the first pair I received was a little snug, so the flight attendant offered me a larger pair. Thankfully.

The amenity kit was packed with SK-II products and had all the essentials. Thank you Qantas first class.

The bathroom didn’t compare to Lufthansa’s, Cathay’s, or Singapore’s, but it did have a nice window.

There’s just something about taking stairs on a plane. I walked up to the second level to stretch my legs many times.

Business class and the lounge area were located on the second level. We had a good laugh sitting on the couch. Just felt weird to be sitting on a couch on a plane, but it was nice to have a change of scenery.

The best part of the lounge area was the bottled water and snacks. I re-upped on bottled waters many times and snagged some dark chocolate.

Qantas First Class was definitely one of my favorites. I just love flying the A380. So smooth and spacious. I really liked the seat and bed on this flight, too. I also prefer the design to many of the other First Class products (ahem, Singapore Suites).

The service on our flight was great. Jordan really connected with our flight attendant and even received about two pages of recommendations on what to do in Auckland, where he was from.

This was definitely, without a doubt, one of the best uses of my miles. Flying Qantas First Class non-stop to Australia…are you kidding me? I feel very grateful. If you see premium cabin Qantas award space, GRAB IT.

If you’re interested in earning miles to redeem for first-class flights, check out the following posts so you can earn for your purchases: