Riding the Greyhound Bus to Canada

I know that my name is Johnny Jet, not Johnny Bus, but above all, I like to save money and time and avoid hassles when I travel—and sometimes taking the bus is the best option. 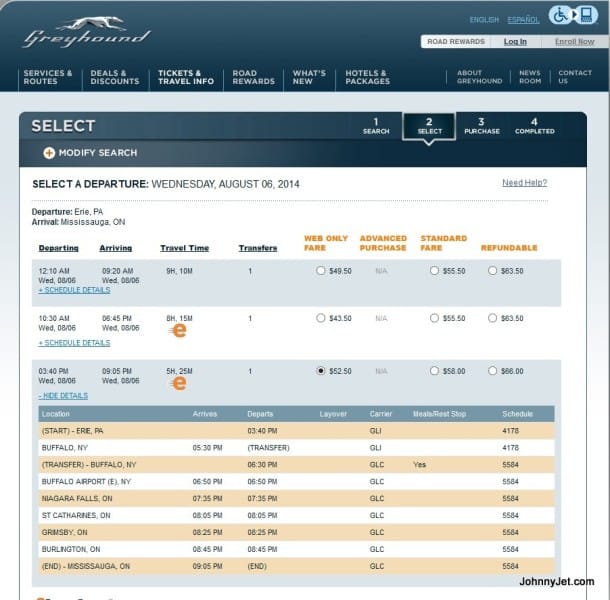 This week, I learned a valuable trick while booking a Greyhound ticket from Erie, Pennsylvania to Mississauga, Ontario (just outside of Toronto). The price for the journey was $52.50 for a last-minute ticket (24 hours in advance), a great deal because flying from Erie to Toronto costs anywhere between $250 and $950 for a one-way ticket. Flying also requires a change of planes and riding on a cramped prop plane unless you fly on one of Delta’s tired regional jets (that’s the $950). 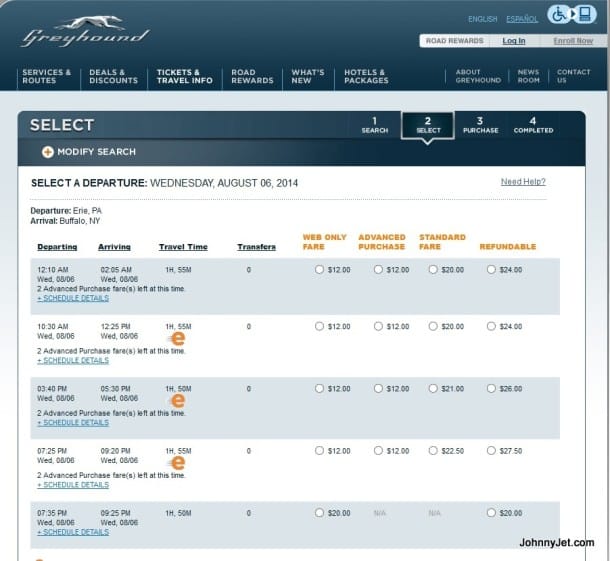 When I noticed there was a transfer in Buffalo, I decided to price my ticket out as two one-ways instead of one. Sure enough, the price went down drastically! A ticket from Erie to Buffalo was only $12 (above) and then the ticket from Buffalo to Mississauga was just $20 (below). By breaking it into two trips I saved almost 40 percent. Crazy, right? 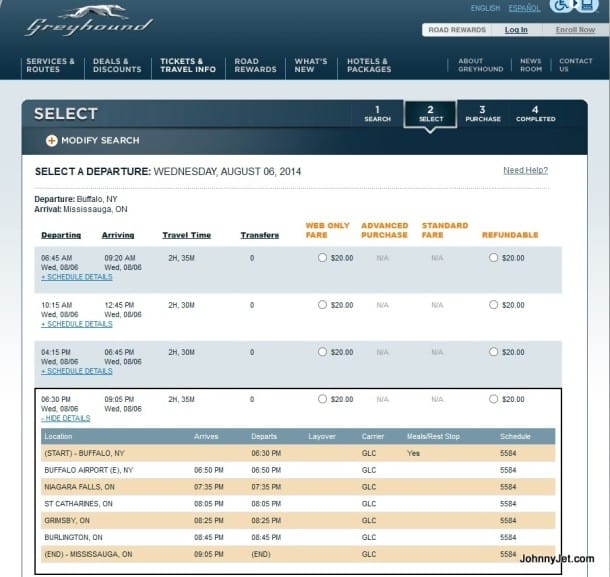 Archaic rules
Speaking of crazy and annoying, Greyhound has these archaic rules that say you HAVE to either print your ticket or pick it up at Will Call an hour before your trip, using a password and the credit card you paid with. Unlike with an airline boarding pass, if you lose your ticket, you’re can’t show them your email confirmation to get around it. You’re just out of luck. Oh, and then there’s the $18 charge if the person who’s traveling is not using his or her own credit card. Ridiculous, right? 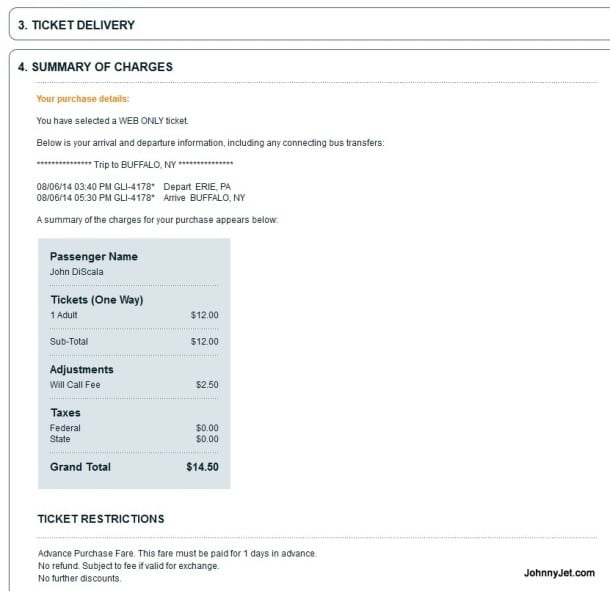 To print or not to print
I was at my sister’s summer house during all of this, under the impression that the printer didn’t work (because it didn’t last year and my nephew said it was still broken). So I selected Greyhound’s Will Call option and was hit with an additional $2.50 Will Call fee (see screenshot above). I decided to get off my butt and go downstairs to make sure that the printer really was broken—and it turned out that it wasn’t. Good news. I redid my reservation to print at home and guess what? As you can see from the screenshot below, Greyhound also charges a $2.50 booking fee for using a credit card! 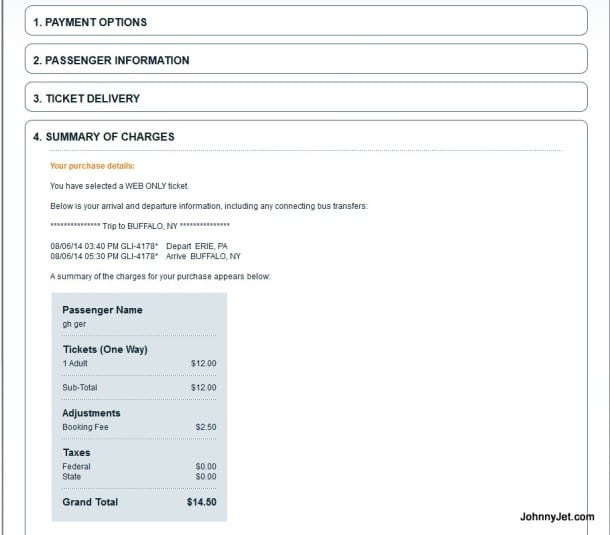 Something smells funny, right? Why doesn’t Greyhound just include this fee in the fare instead of trying to sucker us from the get-go? I’m guessing that they must not get taxed on the booking fee, which is pretty slimy, wouldn’t you say?

Erie to Buffalo, and what I learned along the way
The good news is that the bus rides were uneventful and I learned some valuable info that will better prepare you for your own trip. Starting with:

Buffalo-Toronto
We arrived into Buffalo 20-minutes late, but I still had plenty of time to catch the bus to Mississauga, which wasn’t until 6:30 pm. I was happy to see they had cleaned up the Buffalo station up a bit by tearing down the nasty cement-wall food shop and replacing it with a bright and open Tim Horton’s. But I wasn’t happy when my driver informed me my next bus might be an hour late.

He told me it was possible that they’d add another bus or better yet, that I’d be able to get on the earlier bus to Toronto. I was told to hang out by door number 4 and when I saw a Toronto bus pull up, I got excited. Rarely, do these things go in my favor but believe it or not, this they time they did. When I asked if the bus was going to Mississauga, the driver told me that yes, it was, and asked for my passport and ticket. Just like that, I was off early and on the express bus to Toronto, with the only stops being the border and Mississauga.

The Buffalo-to-Toronto bus is operated by Trailways, not Greyhound, and was a bit nicer. It too had electrical outlets but no Wi-Fi. It also had a noticeably different class of passengers onboard. No gold teeth or scary characters lookin’ for a quick smoke. Most were traveling from the Buffalo airport since it’s so much cheaper to fly to/from Buffalo than it is Toronto.

Canadian border
The Canadian border is just 10 minutes from Buffalo. I was impressed with how the Canucks ran their border where we crossed (usually they aren’t very nice). Our bus was completely full, with 50 passengers, and to steady the flow, they began the process by having the first five rows get off first and grab our bags, including the checked luggage. Families went together to speak to immigration officers and they had all five counters manned. It took only 20 minutes for them to process everyone on the bus and we were off.

Good to know: There’s no bathroom at the border stop but there is one on the bus. There was no traffic and it took just 2 hours and 20 minutes from the time I left Buffalo to get to the Mississauga stop at Dixie Mall.

Overall it was a very pleasant experience and you can’t beat the price.

Even More Good to know: Keep in mind if your first bus is late and you miss your connection you will most likely have to buy a whole new second ticket or plea for an agent or driver to let you slide. 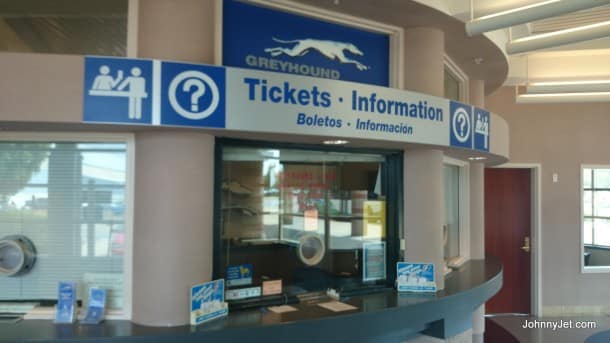 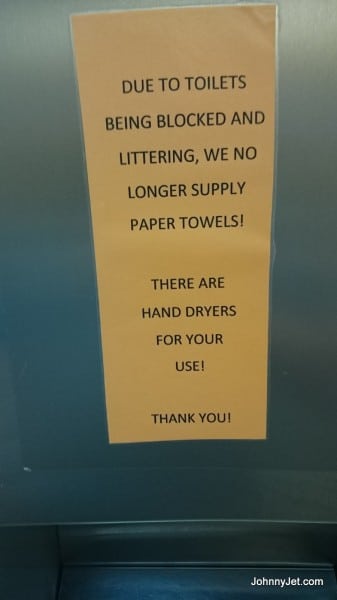 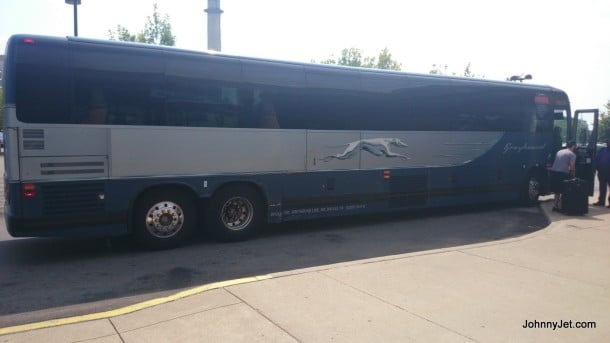 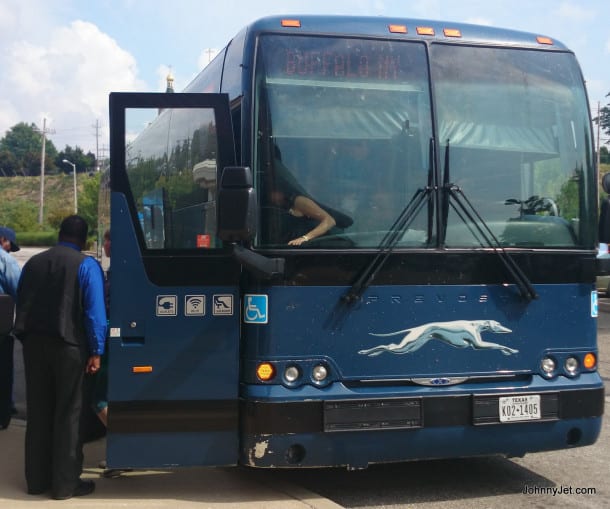 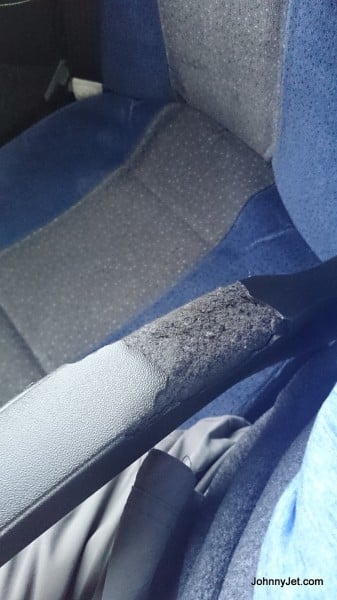 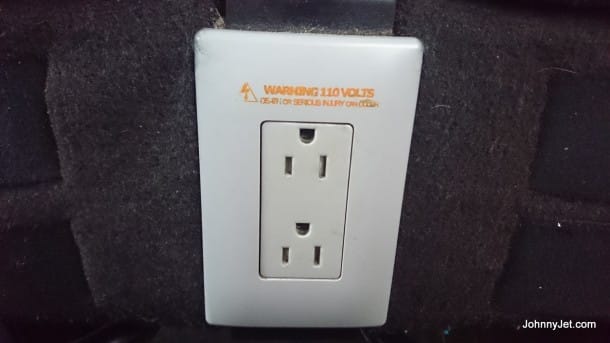 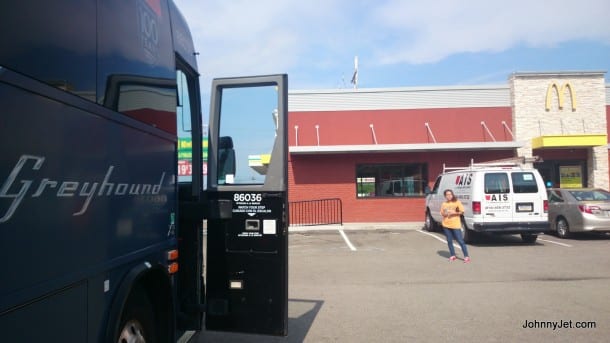 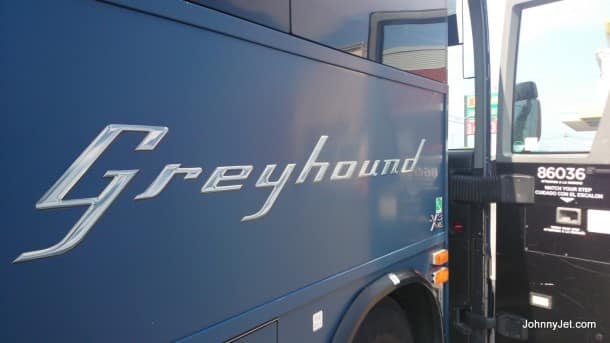 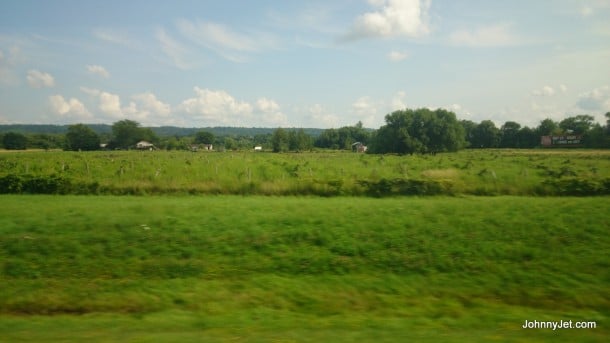 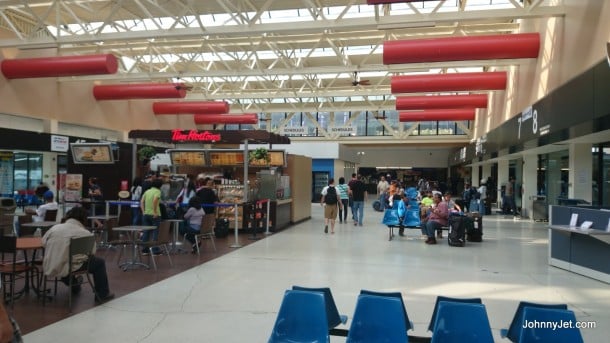 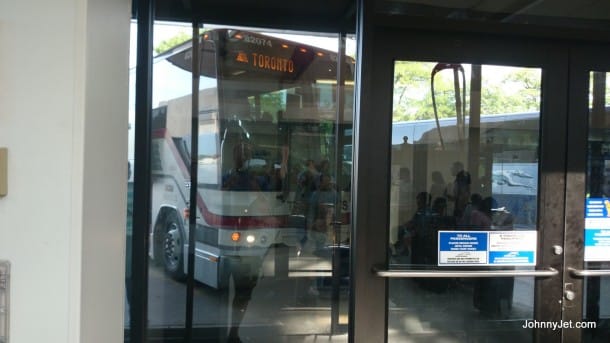 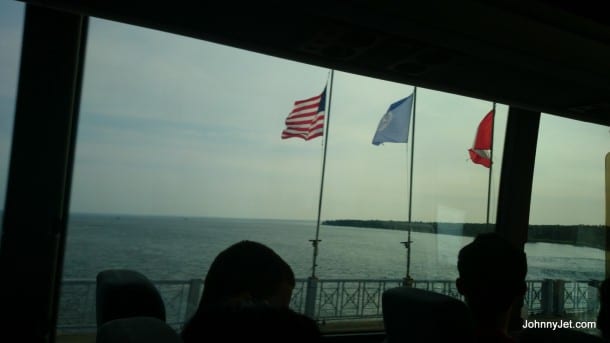 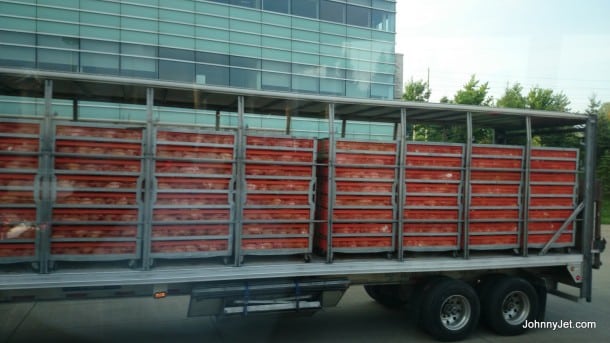 16 Comments On "Riding the Greyhound Bus to Canada"