Rome, Italy with my Dad 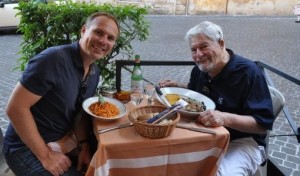 Before my trip to Italy I was in Connecticut hanging out with my family and friends over the Memorial Day weekend, and my brother Frank was kind enough to drive us 50 miles to John F. Kennedy Airport in Queens, New York. Check-in for our Delta Airlines flight took only a few minutes and security wasn’t too bad with only about a 10- minute wait. While walking to the gate I encountered by far the coolest gadget I’ve ever seen at an airport …: the AR.Drone! A salesman from Brookstone was showing it off to passersby’s and he sucked me in. The AR.Drone was so cool I had to make it Travel Product of the week. so iIf you want to learn more see this link.

New York to Rome on Delta Airlines
I was heading to Italy to check out Seabourn’s newest ship, Quest. I was allowed to bring a guest, so I brought my dad, and we arrived a few days early so I could take him back to the island where his parents were born. To make sure I didn’t run him ragged, we spent the first night in Rome. FYI: I will tell you all about Ischia next week and Seabourn’s Quest the following week. 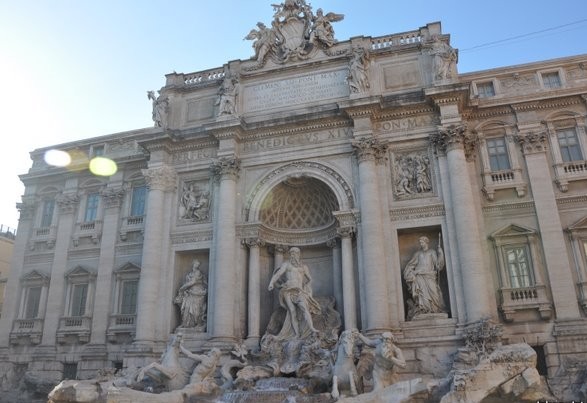 Our 7:05 p.m. flight left out of JFK’s depressing terminal number 3. Luckily our plane boarded on time (6:20 p.m.), so we didn’t have to wait too long in the dark, low- ceilinged ancient terminal. Since our tickets were not upgradeable I did everything I could to ensure we had the best coach seats – –exit row. For a couple weeks before the trip I logged on to Delta.com every day until the exit row seats opened up. They eventually did and we were good to go. FYI: Delta does now offer International Economy Comfort, so if I wasn’t hadn’t been able to get the exit row I would’ve paid for the extra space.

A330
On this route Delta flies a really comfortable A330 that used to belong to Northwest Airlines; but since they merged with Delta it now flies under the Delta name. To ensure the flight attendants would treat us well I went to Duty Free before the flight and bought them a box of chocolates – –they appreciated it, but they weren’t as nice as the crew I gave them to on our return flight (I will write about that flight later).

Push Back
On everyone’s seat was a blanket wrapped in plastic and a pillow–, but bring a sweater because they crank up the a/c and our plane was freezing. Unfortunately, after everyone got on the plane the captain said we were going to be late as we needed to get 6,000 lbs. more fuel because air traffic control had just changed the flight path. It took 25 minutes and we pushed back at 7:30 p.m.

Take Off
It’s always a long taxi at JFK airport in the evening, and we finally took off at 8:05 p.m. Flight time was 7:42 and 11 seconds (that’s what the flight attendant said, which I thought was pretty funny).

Dinner
About an hour after takeoff the flight attendants came down the aisle with the drink and food carts. Passengers get a free alcoholic drink, and the choice for dinner was chicken or pasta. I had pasta but the chicken with sweet potatoes was the way to go.

Some observations about the flight:
-There were a couple empty seats on the plane, including one across the aisle, which one of the FAs made my dad move to on descent since she noticed his hearing aids (we were in the exit row).

Welcome To Italy
What’s really nice about arriving to Italy is that there are no papers to fill out for immigration or long lines to wait in. There were just two agents working and they quickly looked at everyone’s passport without stamping it.

FCO Airport to Hotel
Normally I would take the train from Rome’s Leonardo da Vinci Airport to the city center because if you time it right, it’s the quickest and cheapest way. The Leonardo Express takes 31 minutes and a one-way ticket costs 14 euros (US$20USD). Here are the departure schedules: 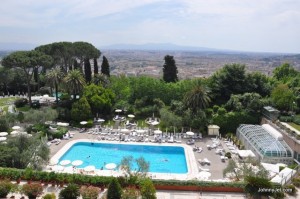 Rome Cavalieri Hotel
It took 35 minutes (in some light traffic) to get to the Cavalieri Hotel (website), which is just on the outskirts of the city. From the outside it doesn’t look that impressive, but once you walk into the marble lobby and see all their incredible art work you get a good feel of how grand it is. The 5–star hotel is run by Hilton and is the company’s first hotel in Europe to be part of their exclusive Waldorf Astoria Hotels & Resorts.

Cavalieri Hotel Pools
Since the hotel has 370 rooms it’s popular with the upscale tour groups, so I saw a bunch of busses out front. Unfortunately, we were only there for a 18 hours, so I didn’t get to experience most of its amenities like their restaurants, indoor/outdoor pools, gym, spa, and fifteen15 acres of lush Mediterranean gardens.

Cavalieri Hotel Check-In
As we were a guests of the hotel they had us check- in at their VIP section. There was no wait at the front desk so there wasn’t much difference except we got to sit and have a glass of water (still or sparkling) as they checked our passports and took the credit card info.

Our Room at the Hilton Cavalieri Hotel
We were in room 555, which had comfortable twin comfortable beds, a sitting area, flat- screen TV with satellite, a working desk with wireless internet (there is a fee and it was slow), marble bathroom, automatic shutters, and a private balcony with a breathtaking view of the city. It was surreal to see historical Rome and the Vatican to the far right. I felt like running there, which I could’ve, but there wasn’t enough time and I was beat from the lack of sleep.

Other room and Hotel observations:
-Every balcony has jasmine plants hanging from them it so the smell is divine.
-Although the room door is a double and soundproof, the connecting door to the next room isn’t, and I could hear my neighbors’ TV.
-The hotel has friendly employees so –when you pass them in the hall they all greet you, including the construction workers.

Imperial Club at Cavalieri Hotel
We had access to the hotel’s Imperial Club, which is located on the 7th floor. It has numerous seating areas, inside and out. There’s only a few tables outside and they are the chosen ones because of the view is so outrageous, but it was always available when we went up there (three times) for a snack, free bottles of Panna water, and the breakfast buffet. The staff was always willing to help and whip up the smallest, but most potent espresso in seconds. The Imperial Club is open from 7.00 a.m. to 11.00 p.m.
Cavalieri Hotel Free Shuttle to City
I didn’t think I would like the hotel since it wasn’t in the city center, but because of all its amenities, spectacular views, countryside feel, and free shuttle, I loved it. The shuttle operates every hour from 8:30 a.m. to 7:30 p.m. (with the exception of a two- hour siesta break in the middle -, so no shuttle at 1:30 or 2:30). It goes between the Cavalieri and Piazza Barberini, and there’s an intermediate stop on Via Veneto. The ride takes 27 minutes. FYI: The hotel has a bellman handing out maps as you get on so –be sure to grab one.

Ristorante Alla Rampa
We ended up going to Ristorante Alla Rampa since it was busy and it appeared a lot of locals were dining there. The location was great and the prices were not bad. I had spaghetti pomodoro for 10 euros (US$14.32 USD) and my dad had coniglio (rabbit) for 12 euros (US$17 USD). They charge 3 euros (US$4.29) for a large bottle of water and 1 euro (US$1.43) each for bread.

Krissy at The Old Stagecoach

0 Comments On "Rome, Italy with my Dad"