How to Snap Up Hotel Room Discounts Like Never Before

Repeat tech entrepreneurs Hussein Fazal and Henry Shi have created a new hotel booking platform called SnapTravel. Advisors in the company include industry veterans such as Scott Booker (the former CEO of Hotels.com) and Stuart Silberg (former CTO of Expedia).

It’s a very interesting way of providing access to some highly discounted rates. As you probably know, hotels don’t like to have empty rooms nor do they want to publicly discount their rooms so that customers won’t ever pay their normal rates.

To find the right balance, hotels have historically sold their unsold inventory to sites like Priceline and/or Hotwire, which don’t show their unusually low rates publicly (with hotel names attached). That’s why to get the most discounted rates, you have to book a room without knowing which hotel you’ll get.

Then HotelTonight came along and became super popular because they could take that same unsold inventory—beginning at noon—and sell same-day hotels for super cheap while disclosing the hotels’ names. This was possible because customers could only book the inventory using HotelTonight’s app on their phones/tablets.

Now, SnapTravel has emerged as the next hotel discount advancement. It lets customers book rooms at even greater (sometimes) discounts—and critically—without having to guess the hotel’s name or wait until the last minute. That’s because with SnapTravel, your discounted price is not displayed publicly but instead over SMS or Facebook Messenger.

I just gave the service a whirl. First, I logged on to their website and input New York City for one night and one person on March 29. I then had a choice to input my cell number or get the deal on Facebook Messenger. I did the former, and I received a text instantly from the site’s bot stating, “Let us show you the best deals we have in Manhattan, New York, United States of America for Wed, Mar. 29th – Thu, Mar. 30th (1 night). Back in a few seconds ”

A few seconds later, I received this message “SnapTravel found amazing hotel deals in Manhattan, New York up to 68% off per night Click the link to view each hotel’s photos, compare prices and review room details”

I tapped the link on my phone and it brought me to a page with hundreds of hotel offers, all of which were compared to deals offered by Hotels.com. Supposedly, SnapTravel offers “discounts up to 50% at 200,000+ hotels worldwide.” It was easy to search as I could filter by name, location, rating, or price. You can also request hotels that have pools, free Wi-Fi or a nice view. 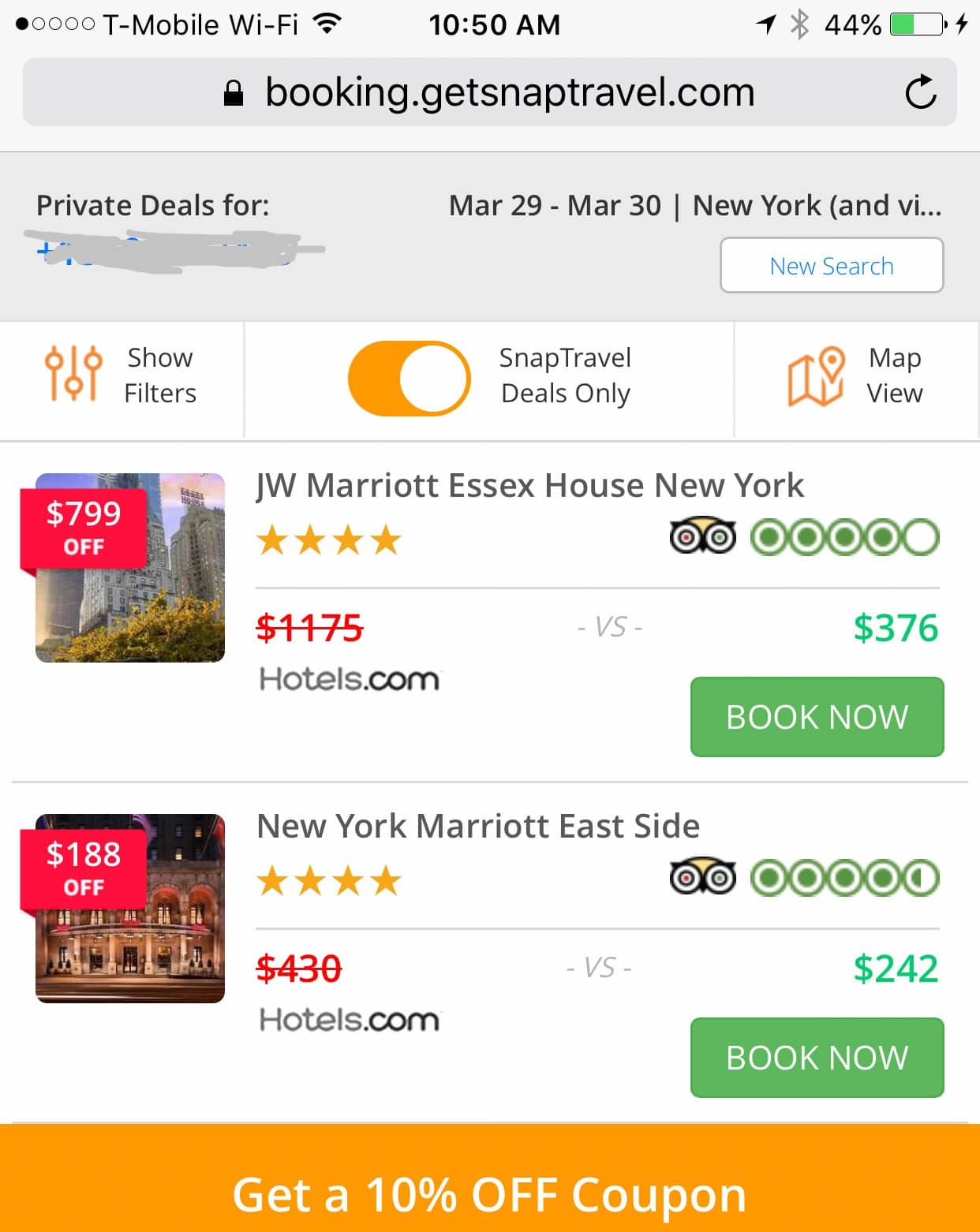 Of course, as with any tool, I recommend using it alongside other websites and tools (use JohnnyJet.com’s search tool!) since not all of their deals offer savings. For example, the two screenshots below show how SnapTravel was selling a room at the Hilton Manhattan East for $212 while Hotels.com had it for $209. Not a big difference, but it wasn’t the cheapest.

The real kicker might be SnapTravel’s customer service. According to Travel + Leisure, “It also has teams of customer-service reps available 24 hours a day to answer unusual requests that its computers can’t address. On the day of your arrival, a human will call your hotel directly to ensure any special requests will be guaranteed, such as early check-in or a room on a higher floor. They will also try to request a free upgrade on your behalf. That’s a service most online travel agencies can’t provide.”

I haven’t found out the full deal yet, but I plan to book a trip with them in the coming weeks and update this post.

Have you used SnapTravel? Let us know your experience in the comments section below.

To get to Los Angeles International Airport (LAX) from my house costs at least $50 roundtrip by taxi. When I only go away for a few nights or less I…