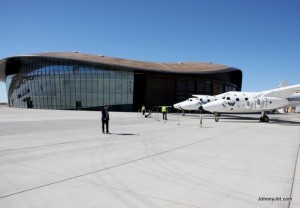 The reason we made the trek to New Mexico was to attend the dedication of Spaceport America, the world’s first commercial spaceport. Just writing that sentence makes me think of the Jetsons. You? When you think about it – it is truly unbelievable.

The day began with us leaving Las Cruces at 5am. We drove 90 minutes north to Elephant Butte, New Mexico to the Turtle Back Resort, where the Virgin Galactic check-in took place. From there, the 800 invited guests hopped on buses for another 50 minutes to the spaceport, which is out in the middle of nowhere. Cell service didn’t work although those with Verizon had one bar of service.

The 120,000 square-foot building isn’t completely done yet but it’s close and impressive. It meets LEED Gold standards for environmental quality and was designed by world-renowned United Kingdom-based Foster + Partners, along with URS Corporation and local New Mexico architects SMPC. The trio won an international competition in 2007 to build the first private spaceport in the world. It’s built using local materials and regional construction techniques and the facility is sustainable with few additional energy requirements due to the use of a range of sustainable features including geothermal heating and cooling.

What was even more impressive was Virgin Galactic‘s commercial space vehicles WhiteKnightTwo and SpaceShipTwo. My jaw dropped when I first laid eyes on them (they were conjoined as one). Sir Richard Branson and his children, Sam and Holly, and mother, Eve, were all there as they will all be the first commercial passengers into space, which is expected to take place in December of 2012. Other notable guests included Buzz Aldrin, Kate Winslet, Sarah Brightman and New Mexico Governor Susana Martinez. In addition to the media, those who had either plopped down the $200,000 fee (over 150 people) to go up in space or the $20,000 deposit (over 300 people) were invited, as well as the astronauts and those involved in the project.

I can’t tell you what was said in my interviews – you’ll need to wait until the TV show airs (I will tell you all about the details as soon as the production company lets me). I can tell you that Sir Richard is one cool dude and always has a flair for surprise and the dedication of the spaceport was no different. He, his children and a bunch of performers rappelled down the side of the glass building with bare feet and did tricks like they were floating in space. Then a magnum bottle of champagne was lowered to Sir Richard who was now hanging by himself and he made a few remarks before popping the cork and spraying the crowd and then of course taking a couple swigs from the bottle. What an entertainer and visionary. 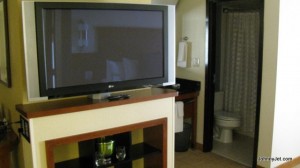 Hyatt Place El Paso Airport
Since we had early morning flights we decided to book a hotel near the airport. So we drove back to El Paso and got rooms at the Hyatt Place El Paso Airport. The rooms were much nicer than I expected. First of all, they are huge suites with comfortable beds and a 42″ flat panel HDTV. The room also had a mini fridge, designer toiletries and a travel size tube of toothpaste (the one thing I always seem to forget). On top of that, they had all kinds of complimentary features that most luxury hotels charge for like Wi-Fi, continental breakfast, parking and airport shuttle. The only thing I didn’t like is that the elevators were old and slow and they didn’t serve Tex Mex food in their lobby restaurant. Hyatt Place El Paso Airport, 6030 Gateway Boulevard E; El Paso, TX; Tel: 915-771-0022.