Talavera pottery, how I love thee! Until now, that love has been from afar. Having visited your home in Puebla, my love burns stronger than ever.

Okay, so I may be exaggerating a bit, but I have loved these brightly colored tiles and dishware since I hit the West Coast many moons ago. That one city, Puebla, is home to my beloved mole poblano as well as my equally well-loved Talavera pottery seemed too good to be true. But true it was, and most of the mole I ate was served on Talavera plates. Bliss.

Puebla has been called, with good reason, “The City of Tiles”, a fitting tribute given the numerous buildings that incorporate Talavera tiles into their décor. Puebla’s tile-making history dates almost to the city’s founding in 1531 thanks to the happy confluence the area’s fine clay and Spanish immigrants’ tile-making techniques.

Talavera takes its name from the Spanish town Talavera de la Reina, a pottery center that had in turn been influenced by the Moors in the 8th Century. (Which explains why the pottery I got from the Armenian quarter in Jerusalem looks a lot like Talavera from Mexico.)

By 1653 a potter’s guild was established regulating Talavera’s production. The pottery flourished for the next hundred years as the city grew and the demand for decorative tile-work grew along with it.  Centuries old Talavera tile-work is omnipresent in Puebla’s historic district today. Originally the tiles were white and cobalt blue, but in the 18th century the color list was expanded to include yellow, black, green, orange and mauve.

Talavera pottery today uses the same techniques as in 1653 and is restricted to the same six colors. Only workshops certified by a special regulatory agency after passing rigorous semi-annual tests can call their pottery Talavera, Mexico’s way of preserving this historic craft.

The technique is time-consuming, labor-intensive, and therefore expensive, explaining why there are currently only nine certified workshops and many imitators.  Authentic Talavera has the name of its studio, the mark DO4 and often a hologram. The pottery found in most tourist shops calling themselves Talavera will not have these marks.

Making a piece of Talavera typically takes three months. Fine black and white sand is mixed to create the clay. A block of this clay is softened by foot before being pressed into a mold or hand shaped. Only after the piece has sun dried over a period of weeks or even months is it fired. From there it is hand-dipped into a milky white glaze; stenciled patterns (often proprietary to the workshop) are dusted onto the pottery in charcoal and then hand-painted. A second firing and the piece is finished.

The process is so arduous that about one third of the pieces never make it to completion. Ah, but those that do! I was like a child in a candy store wanting everything at the three studios we visited.

Delightful Fernanda Gamboa of Talavera Santa Catarina took our group on a tour of her workshop in Cholula, explaining in detail all of the processes needed to produce Talavera. Next, we visited Uriarte Talavera, located in the historic district. Founded in 1824, Uriarte is one of Mexico’s oldest businesses.

Finally, while dining at Casareyna, we were able to visit a small gift shop representing the work of its larger, off-site workshop. Casareyna has engaged contemporary Mexican artists to help give its Talavera a more modern look.

Fernanda graciously boxed the pottery I bought at her shop so that I could carry it on the plane without breaking anything.  She even fashioned a handle for me.  Alas, the eager young women of the Puebla Airport security must have thought me suspicious because they took apart the box and examined every piece of Talavera. Sorry to say that they were better at ripping apart boxes than repacking them. I just managed to get on the plane in time and am happy to say that nothing got broken. I use my Talavera often, a wonderful reminder of the City of Tiles. 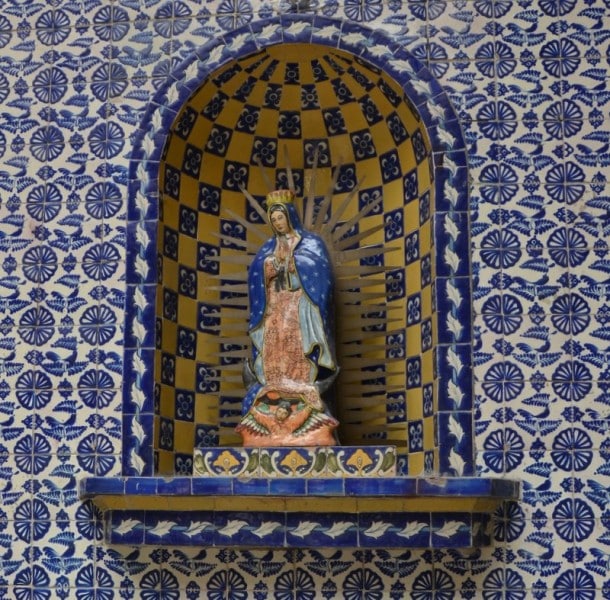 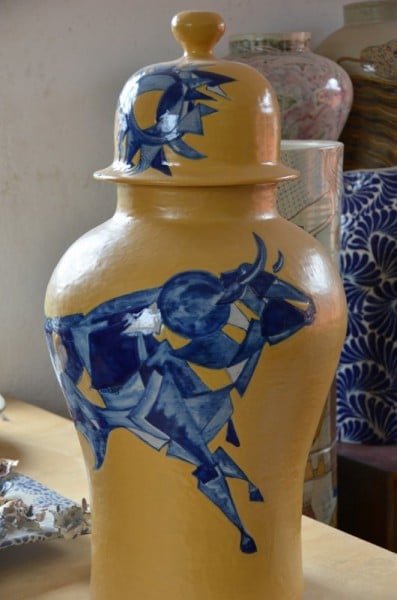 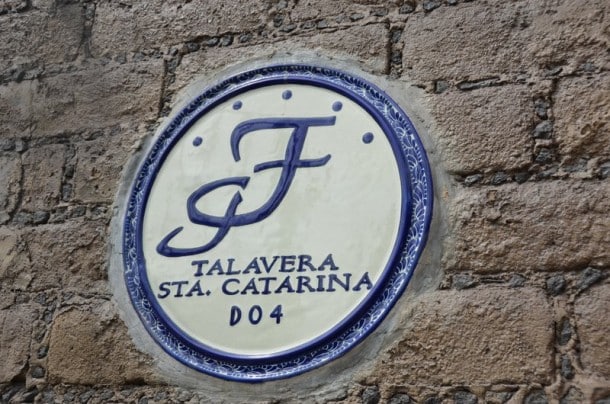 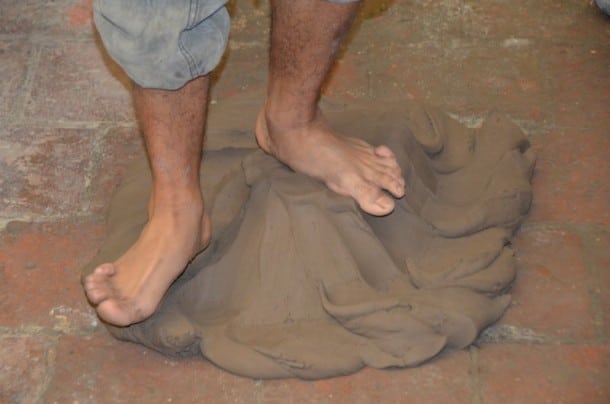 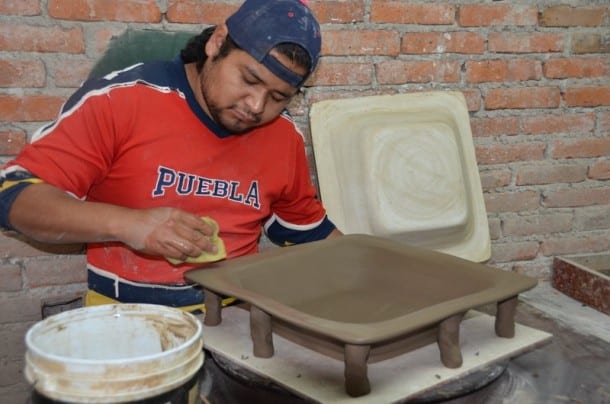 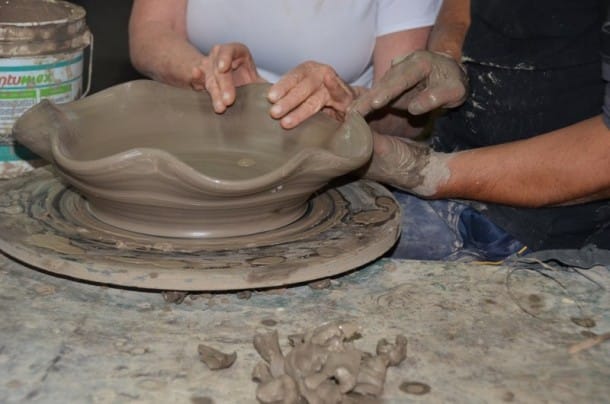 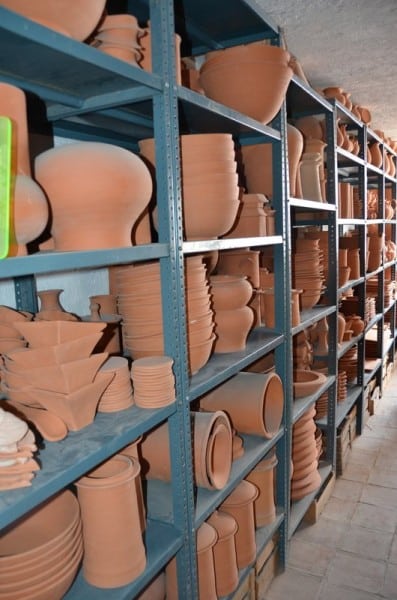 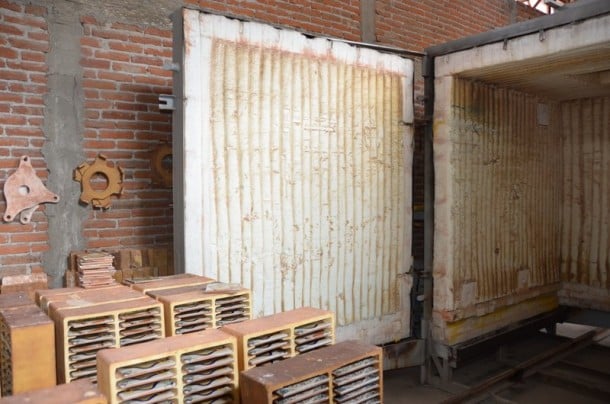 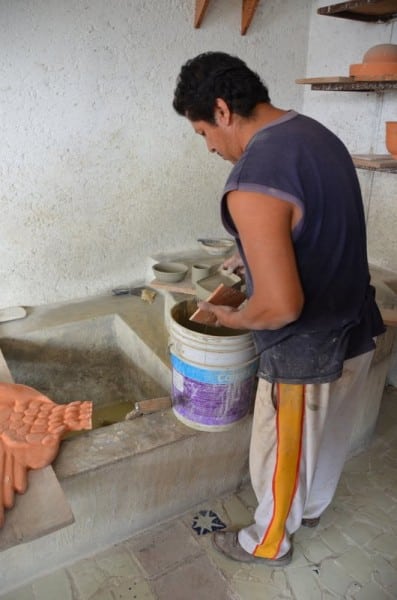 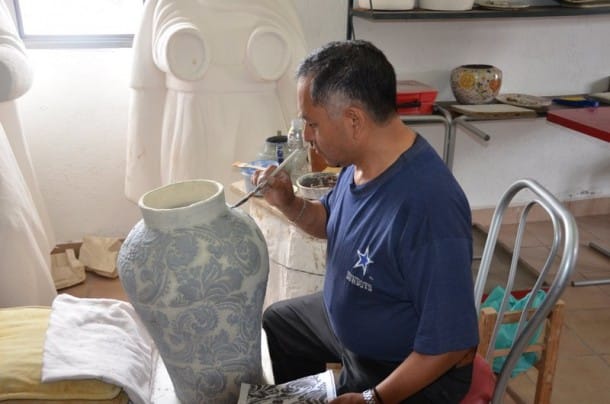 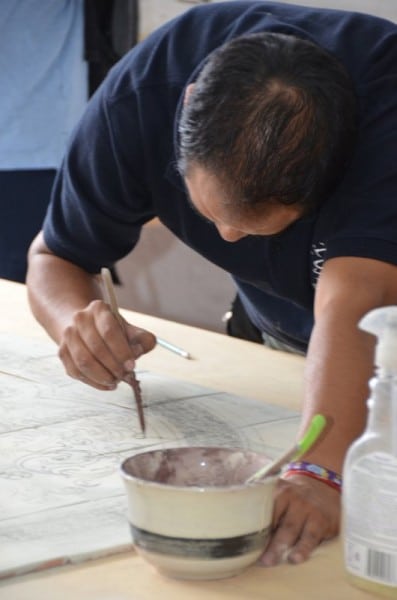 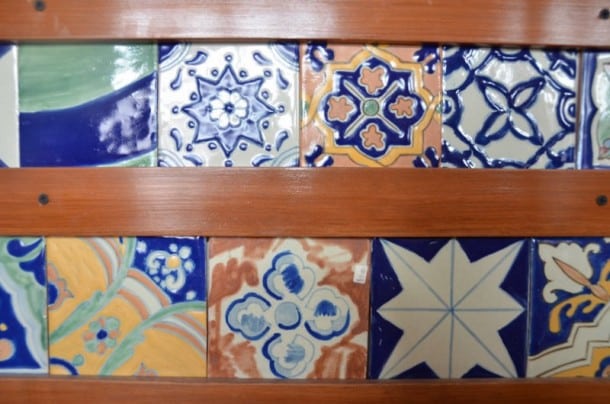 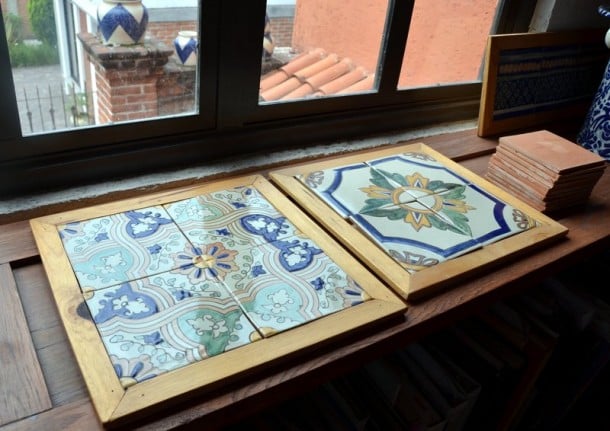 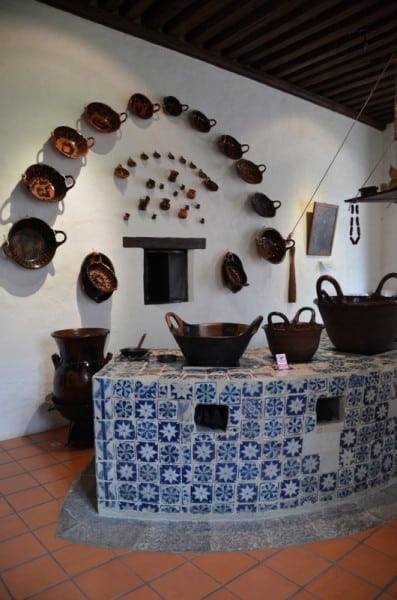 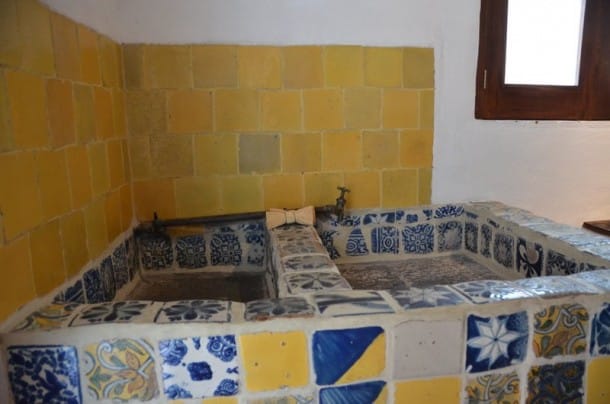