Jim Milio has been a writer, producer and director of television series and specials for more than 30 years, including Travel Channel’s Hot Spots 2013 starring Johnny Jet. Milio also produced Dog Whisperer for National Geographic and The Real Las Vegas for A&E.

This is the first part in Jim Milio’s three-part series in Thailand.

What’s wrong with me? I haven’t taken a full two-week vacation in more than two decades. My amazing wife Jeanette decided that this losing streak needed to end, so we booked a trip to a country neither of us had ever traveled to, but was on high up on our bucket lists: Thailand. We spent a week renting a private villa in the beach resort of Hua Hin and then several days at various Anantara resorts in Bangkok. Both are detailed in two more of my must-read missives, which will follow in the next two days.

Here, I want to showcase a handful of awesome adventures we enjoyed, because the “Land of 1000 Smiles” offers real magic. The Thai people are among the friendliest I’ve met anywhere on the planet and it’s not hard to feel the spiritual vibe everywhere—even in the middle of bustling Bangkok.

We wanted to hit some of the key spots in Bangkok but not with a big tour group. We also didn’t want to wander by ourselves either. Jeanette popped online and at TripAdvisor found George—who is part of thaitourguide.com, which customizes day tours of Bangkok and its surrounding areas. George picked us up at our hotel with a driver and whisked us around the city effortlessly.

We visited the Thai Royal Temple and Royal Palace, took a Chao Praya River tour, explored Wat Pho (Temple of the Reclining Buddha), had lunch, and trekked through the famous flower/vegetable market. George handled everything and was a phenomenal tour guide with a thoughtful answer for every possible question we offered him. He also took us to an off-the-beaten-path Thai restaurant where we all ate a lunch feast for $15 US! The all-day tour was completely worth the 6,900 Thai Baht (approximately $200), which includes all fees and tour costs.

The night markets of Thailand are infamous. We hit two of them. The Patpong Night Market is set right in the middle of Bangkok’s notorious red-light district. If you need to ask what a “Ping pong show” is…then don’t. As for goods, you can find everything from candles to knockoff designer purses to Thai silks. Bargain hard and you can get real deals here.

In the resort city of Hua Hin, we traveled to the Cicada Night Market, which we both loved! Cicada features artists’ handcrafted wares including clothes, wood carvings and many items you just won’t find anywhere else. Cicada also features great street food vendors, and we chowed down on a yummy variety of noodles, meats and desserts. To top things off, we watched an entertaining Thai pop band here. You truly haven’t lived until you’ve heard a Reggae version of “My Way” performed by a Thai singer.

3. A great, cheap taylor (and a weird coincidence)

Here’s the strangest thing that happened on the entire trip: Jeanette hoped to get a dress made at one of the hundreds of tailor shops that populate Bangkok, ones that whip up low-cost suits and dresses of any kind in as little as 24 hours. Our hotel recommended a place, but we had trouble locating it. The streets were crowded and we looked like bumbling American tourists. Eventually, a small, stout Thai woman dressed in black asked if we needed help. After explaining what we were after, the woman mentioned that it was a holiday and most of the tailors would be closed. She did know of a good place, she said, and wrote down the name, summoned a tuk tuk driver and negotiated the fare for us. “If he charges you more than 60 baht ($2), don’t pay it!” she exclaimed and sent us on our way.

Within seven minutes, we arrived at IFC Tailors and Jeanette arranged for an awesome dress made from scratch in less than 48 hours for $70. One week later, in another section of Bangkok, we were walking on another street when we bumped into…the same Thai lady who helped us a week earlier!? In a city teeming with more than eight million people, what are the odds of running into the same stranger twice on two different days in two different sections of the city?! We decided the universe was trying to tell us something—but we don’t know what. If you figure it out, please get in touch.

If you visit Thailand and don’t get massages, you’ve made a terrible mistake. In addition to charging as little as $10 for an hour massage, Thai masseurs and masseuses are often wizards and sorcerers when it comes to body work. In Hua Hin, we discovered the White Orchid Spa, which is run by a charming Swiss woman named Gabriela. The White Orchid is beautifully appointed and the massage therapists were, without question, the best we had while in Thailand…and that’s saying something. The White Orchid will even dispatch drivers to pick you up from your hotel in Hua Hin and then drop you back once you are a satisfied mass of kneaded flesh. 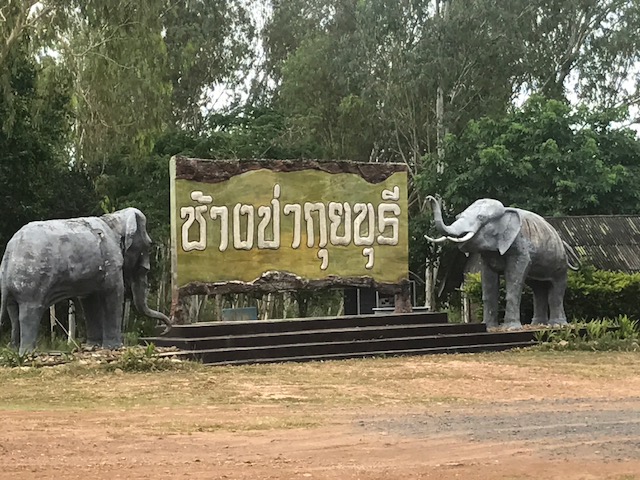 Kui Buri National Park was easily the highlight of our trip and there’s no way we would have ever known about this place without White Orchid owner Gabriela telling us about it…and then taking us there herself! Located near the border of Myanmar and Thailand, roughly about an hour’s drive from Hua Hin, Kuiburi is a 370-square-mile park that is home to more than 300 elephants. After paying a modest fee ($15 each for the three of us), we boarded a small pick-up truck with our guide to view elephants in the wild. As the hours progress, you never know when you are going to run into a single bull male or a herd of moms with their progeny. It was thrilling to be able to come so close to these magnificent beasts in a place where they can roam freely. It was a day we will never forget.

In part two: Anantara in Thailand.