The Funniest Animal Photos of 2022: See the Winners of The Comedy Wildlife Photography Awards

Anyone who loves to travel knows just how spectacular this planet truly is. Experiencing the people, cultures, foods and wildlife of places around the world confirms what a wildly beautiful and exciting place Earth is. Speaking from personal experience, my trip to Africa in 2013 was absolutely life-changing because of the people but also because of the wildlife I saw living peacefully in their natural habitats. That trip shifted my perspective on so many things about the world. RELATED: The Best Time to Capture Photographs While on Vacation

Paul Joyson, co-founder of Comedy Wildlife, started the Comedy Wildlife Photography Awards in 2015 to bring people together to work towards a common goal. “Our world is extraordinarily beautiful and interconnected, yet the human race is doing its best to over-exploit and damage it,” Paul says on his website. “Issues of wildlife conservation and sustainability are gaining momentum globally, yet the messages and images tend to be negative, depressing and enervating.”

Paul is a wildlife photographer and while he was living in East Africa, he discovered that many of his own photographs of animals were funny, entertaining. According to the website, “He realised that the humour of these photographs was both entertaining and a means to engage people with the threats facing these same animals.”

“A funny animal photo is incredibly effective because there are no barriers to understanding, or taboos that must be negotiated. It taps into the impulse for anthropomorphism (big word!) which is well-documented as one of the most powerful triggers for human empathy. To really understand animals and the issues that affect them, you need to empathise with them as fellow inhabitants of the same planet.”

The Comedy Wildlife Photography Awards showcase the best of humorous wildlife photography and raise awareness about the organization’s wildlife conservation and sustainability efforts. Each year, thousands of images are submitted and winners are selected in the following categories: Creatures of the Land, Creatures of the Air, Junior Photographers (for photographers under 18), Internet Portfolio, Underwater and Video Clip.

This year’s winning photos are wonderful, wildlife like you’ve never seen it before and in ways that will make you laugh out loud. Here are the winners of the 2022 Comedy Wildlife Photography Awards: 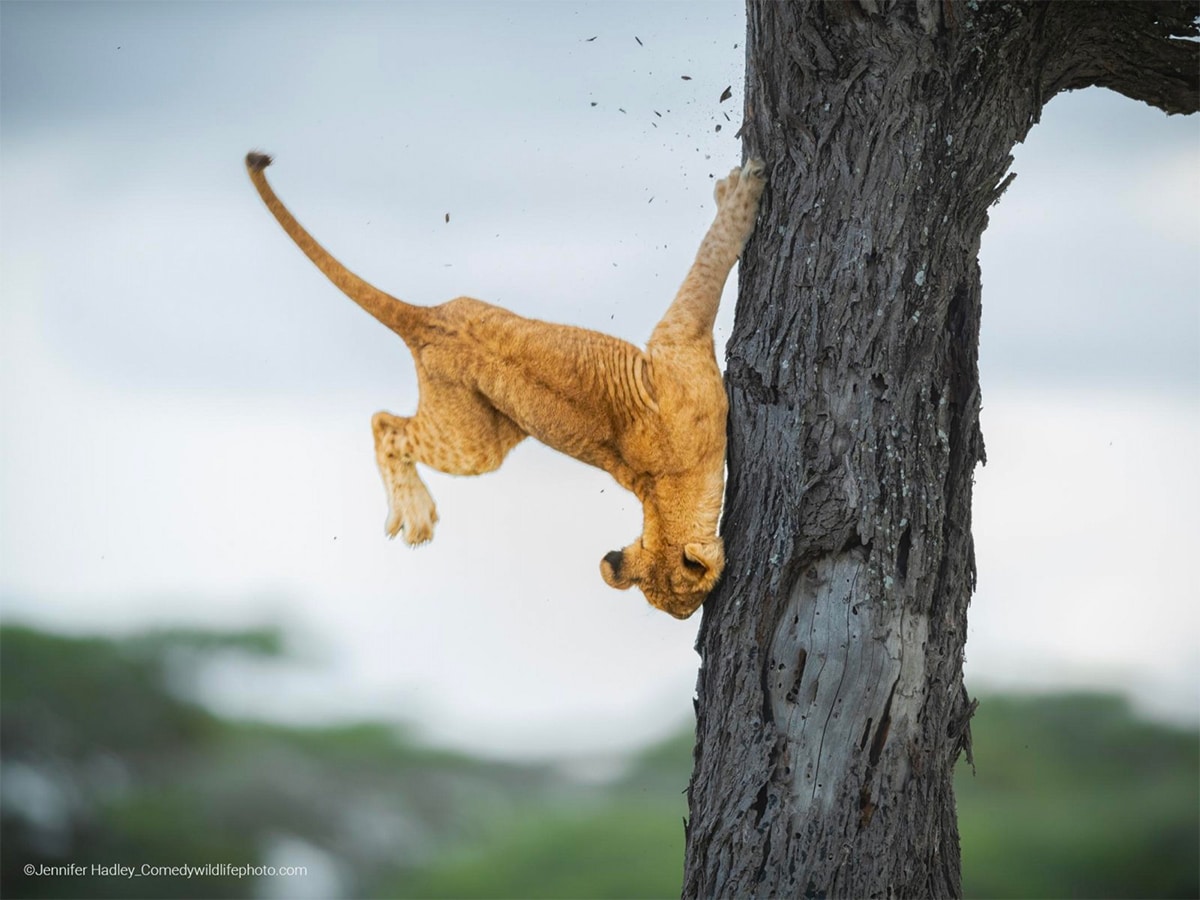 WINNER: Creatures of the Land Award
PHOTOGRAPHER: © Jennifer Hadley | Comedy Wildlife 2022
“This 3 month old cub and his sibling were in a tree. The other lionesses were in other trees and on the ground. He wanted to get down and walked all over the branches looking for the right spot and finally just went for it. It was probably his first time in a tree and his descent didn’t go so well. He was just fine though after landing on the ground. He got up and ran off with some other cubs.” 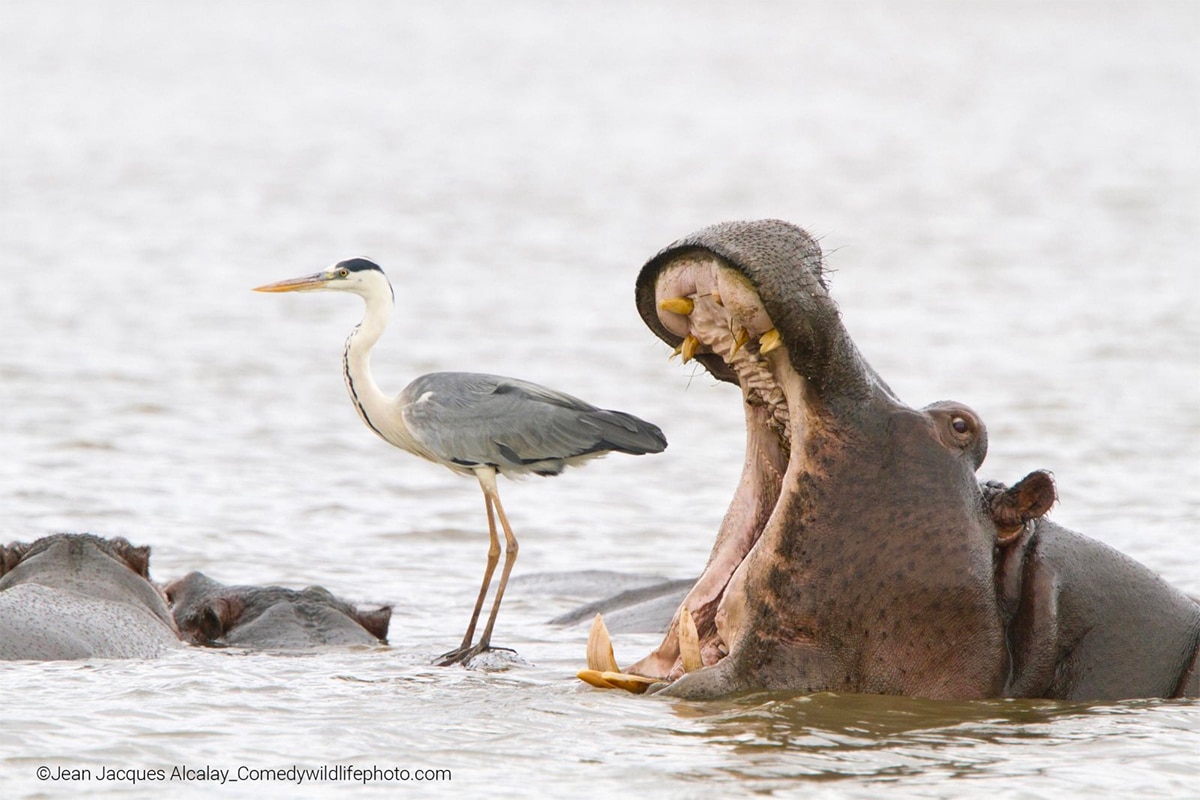 WINNER: Creatures in the Air Award
PHOTOGRAPHER: © Jean Jacques Alcalay | Comedy Wildlife 2022
“Hippo yawning next to a heron standing on the back of another hippo.” 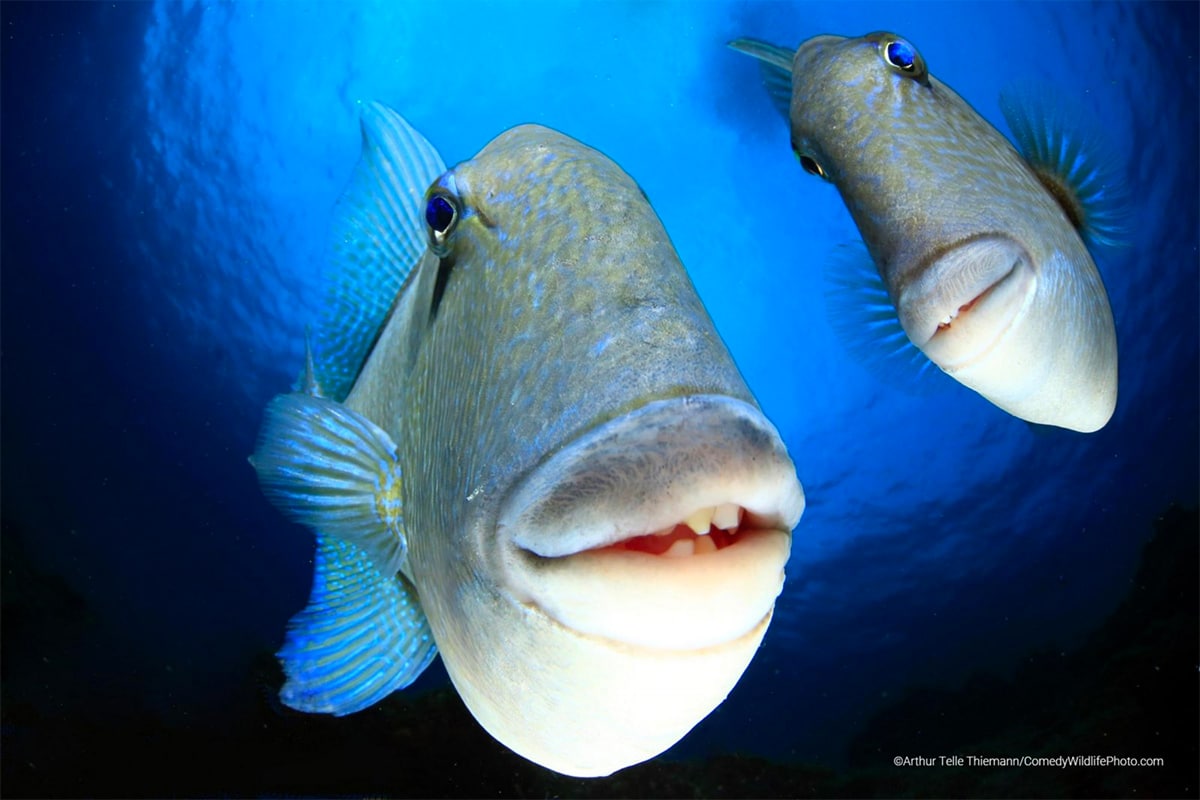 WINNER: Creatures Under the Sea Award
PHOTOGRAPHER: © Arturo Telle Thiemann | Comedy Wildlife 2022
“A couple of triggerfish looking into the camera, captured at the Azores. Even they may look funny, these fish can be quite aggressive. In this case they didn’t attempt to bite me, but the domeport of my camera housing ended up with some scratches… life is hard… at least it wasn’t me who was hurt.” 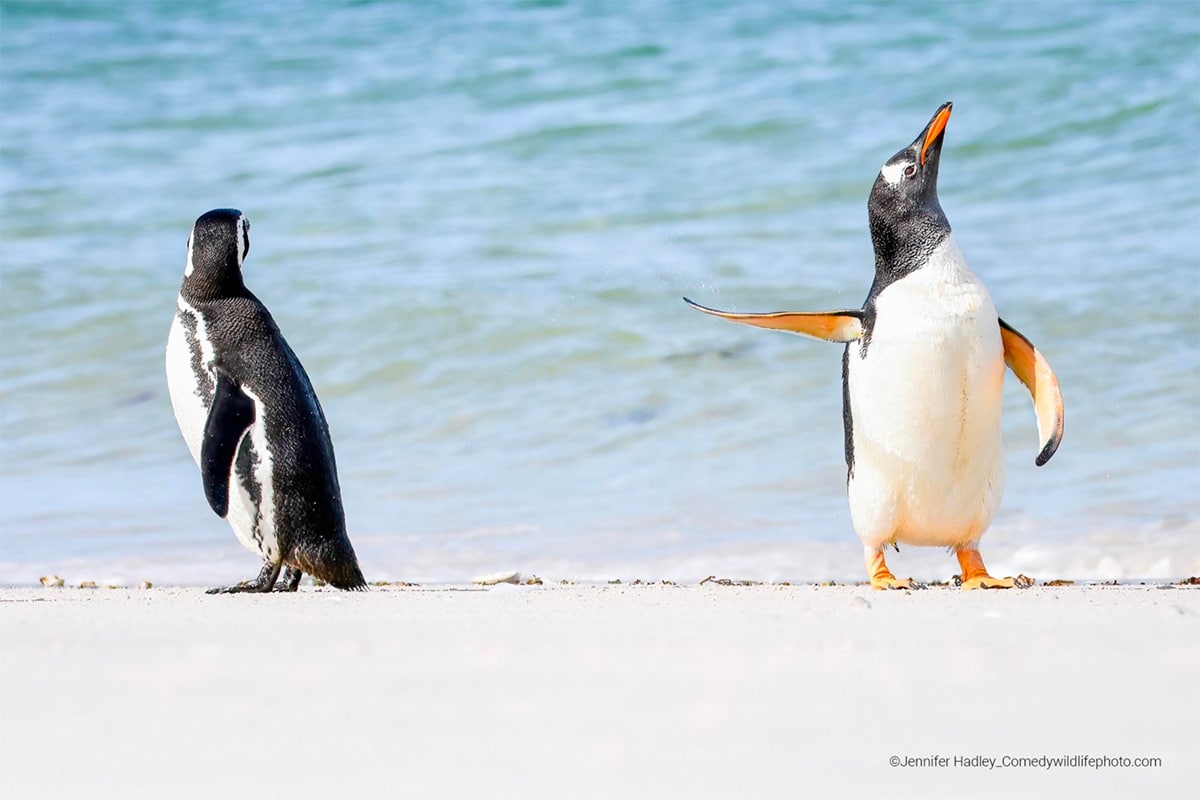 WINNER: People’s Choice Award
PHOTOGRAPHER: © Jennifer Hadley | Comedy Wildlife 2022
“This was shot on the Falkland Islands. These two gentoo penguins were hanging out on the beach when one shook himself off and gave his mate the snub.” 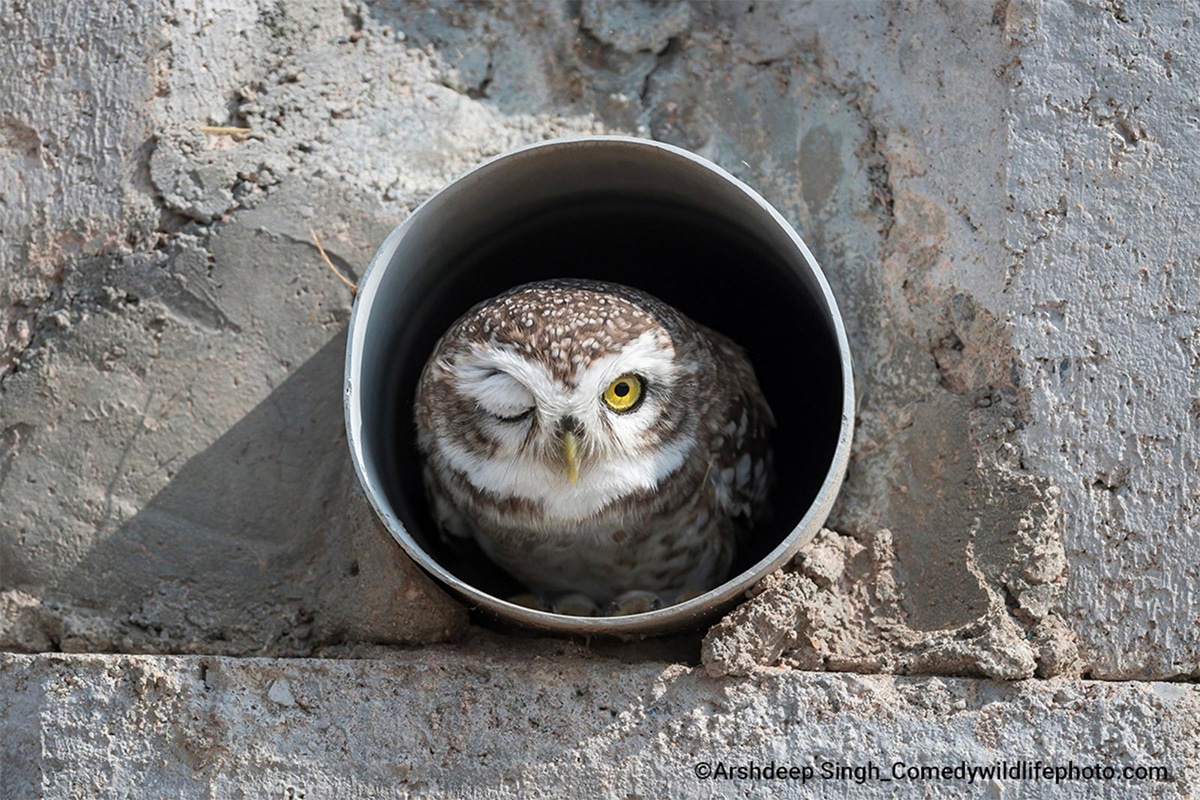 WINNER: Junior Award
PHOTOGRAPHER: © Arshdeep Singh | Comedy Wildlife 2022
“Few hundred miles away we went to explore wildlife of a small town named ‘Bikaner’. It was after almost a year I travelled because of covid. We hired a guide to explore places around. During last day of our trip we came across a pipe in a city where we spotted an owlet. I have earlier clicked owls in a pipe before so I was sure that I wasn’t mistake. We waited for a short while and it didn’t take a long time and one of the spotted owlet came out of the pipe. It was really funny when he came out and looked at me straight, before going inside he closed one of his eyes and felt like he wanted to say I CU boy ! and I immediately snapped a picture when he gave this pose.” 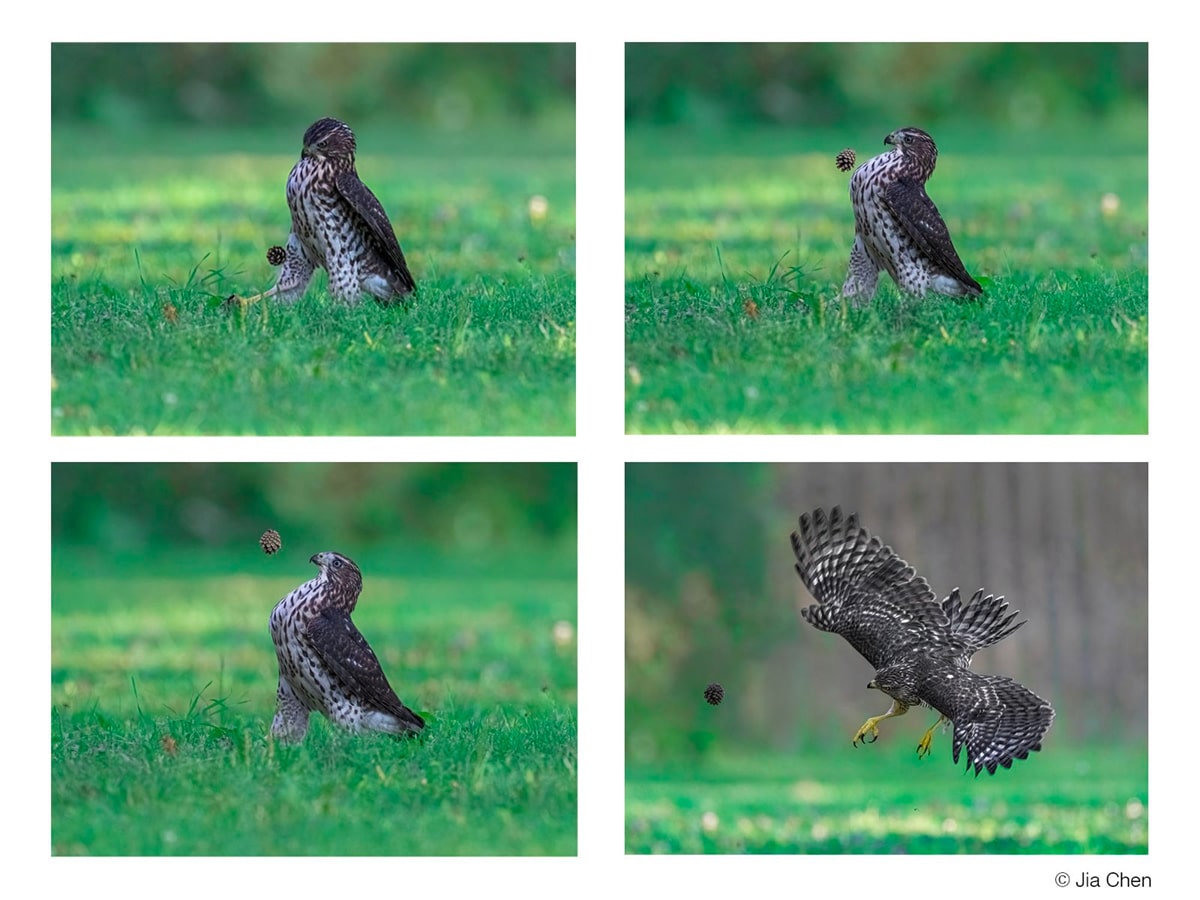 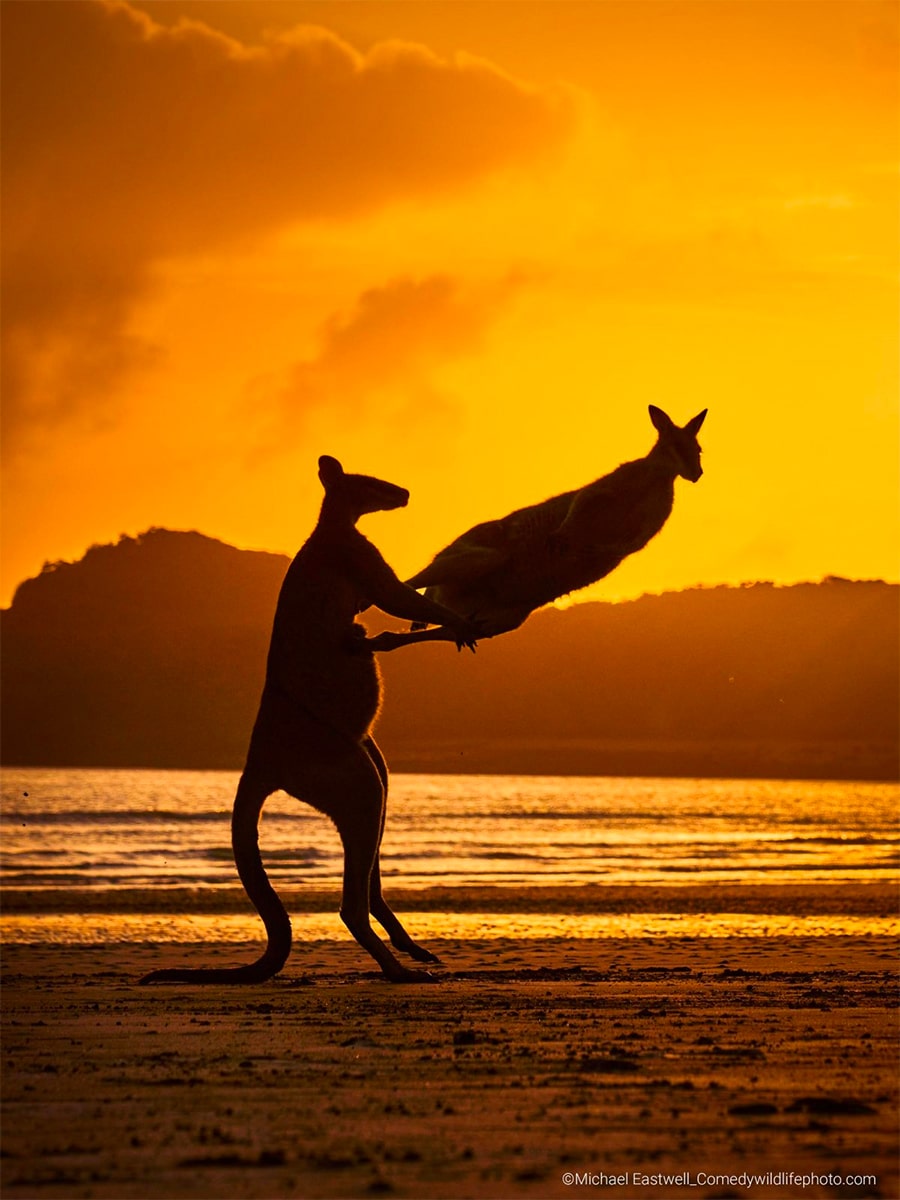 PHOTOGRAPHER: © Michael Eastwell | Comedy Wildlife 2022
“Apart from its beauty, Cape Hillsborough is renowned for its resident kangaroos and wallabies. I visited the area for three consecutive sunrises, but it was on my final morning that I captured this beautiful spectacle, two wallabies playing / fighting on the beach as the sun burst through the surrounding clouds.” 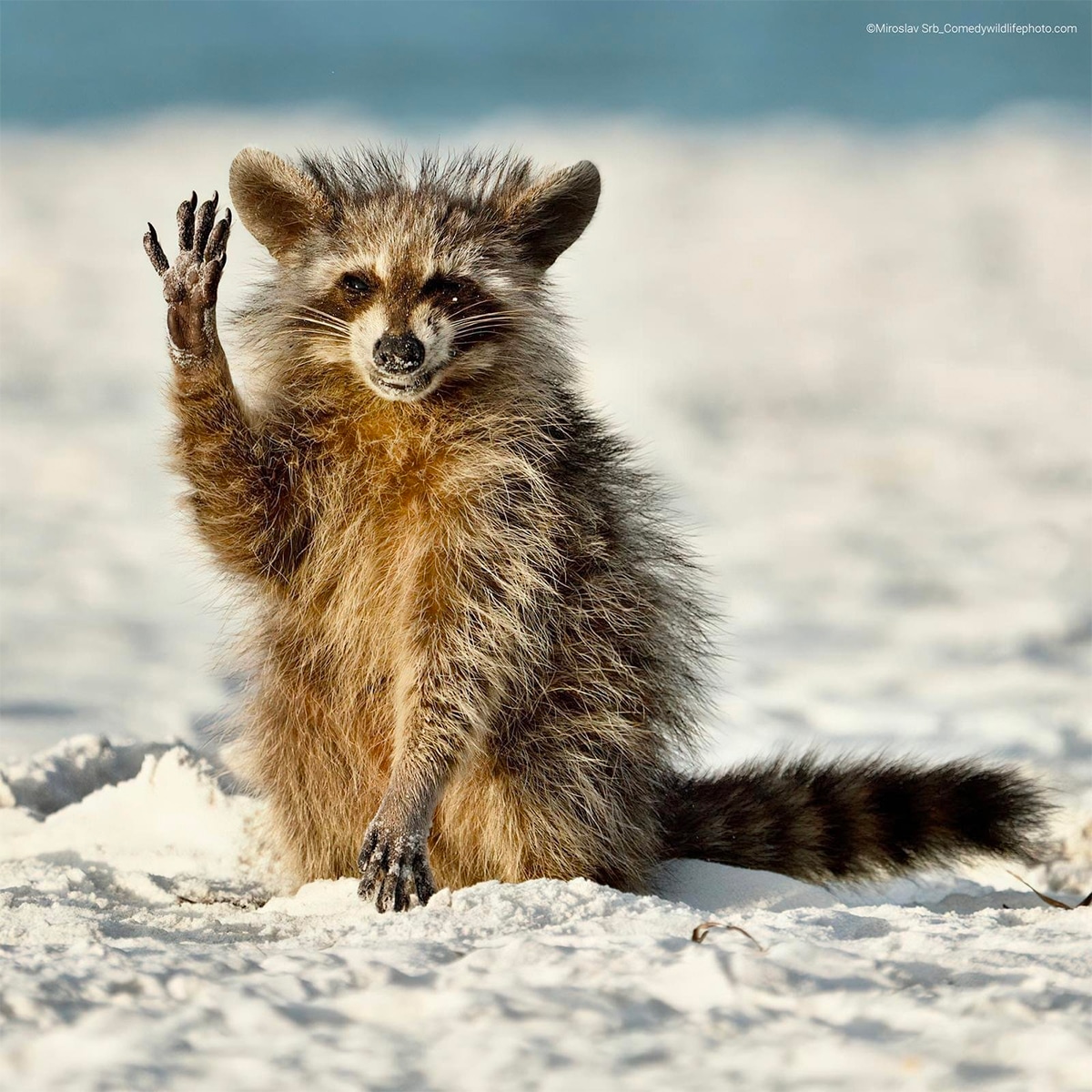 PHOTOGRAPHER: © Miroslav Srb | Comedy Wildlife 2022
“I photographed raccoon on a Florida beach, where I fed him shrimps. Then he thanked me like that.” 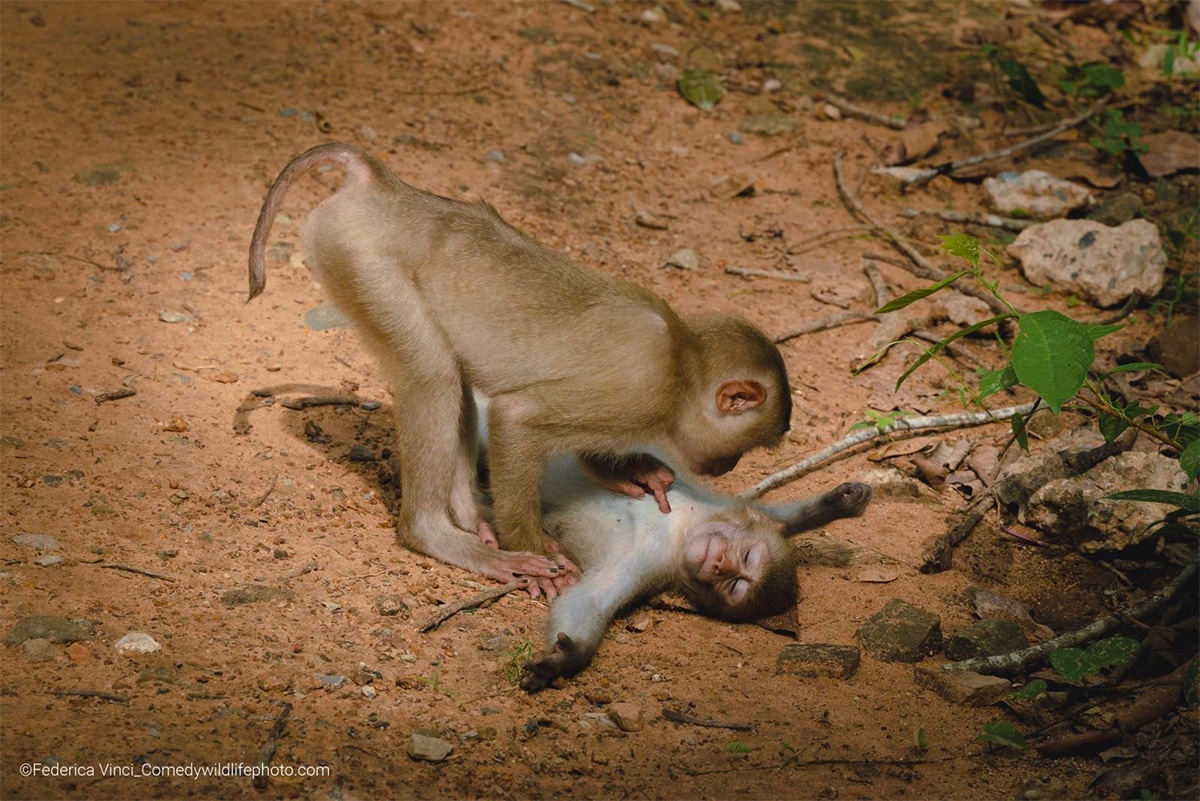 PHOTOGRAPHER: © Frederica Vinci | Comedy Wildlife 2022
“Walking near a Cambodian temple where groups of wild monkeys lived, I came across this scene: a wild monkey in total relax, while its friend was taking care of it.” 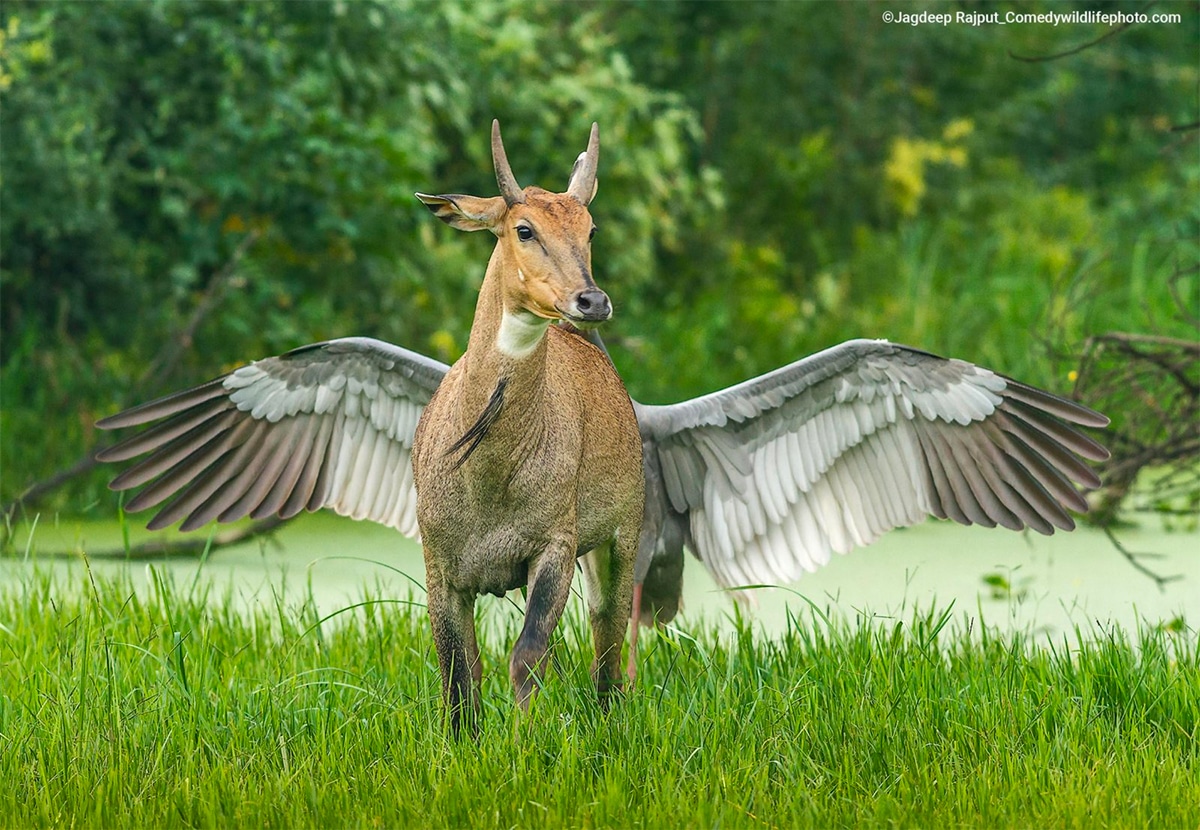 PHOTOGRAPHER: © Jagdeep Rajput | Comedy Wildlife 2022
“Actually this is Indian Saras Crane attacking a Bluebull from behind, the bull happened to venture close to Saras’s nest, where in, it had laid a single egg. The Saras Crane, which is tallest flying bird in the world, opened its huge wings and attacked the bull from behind, driving the bull away from the nest.” 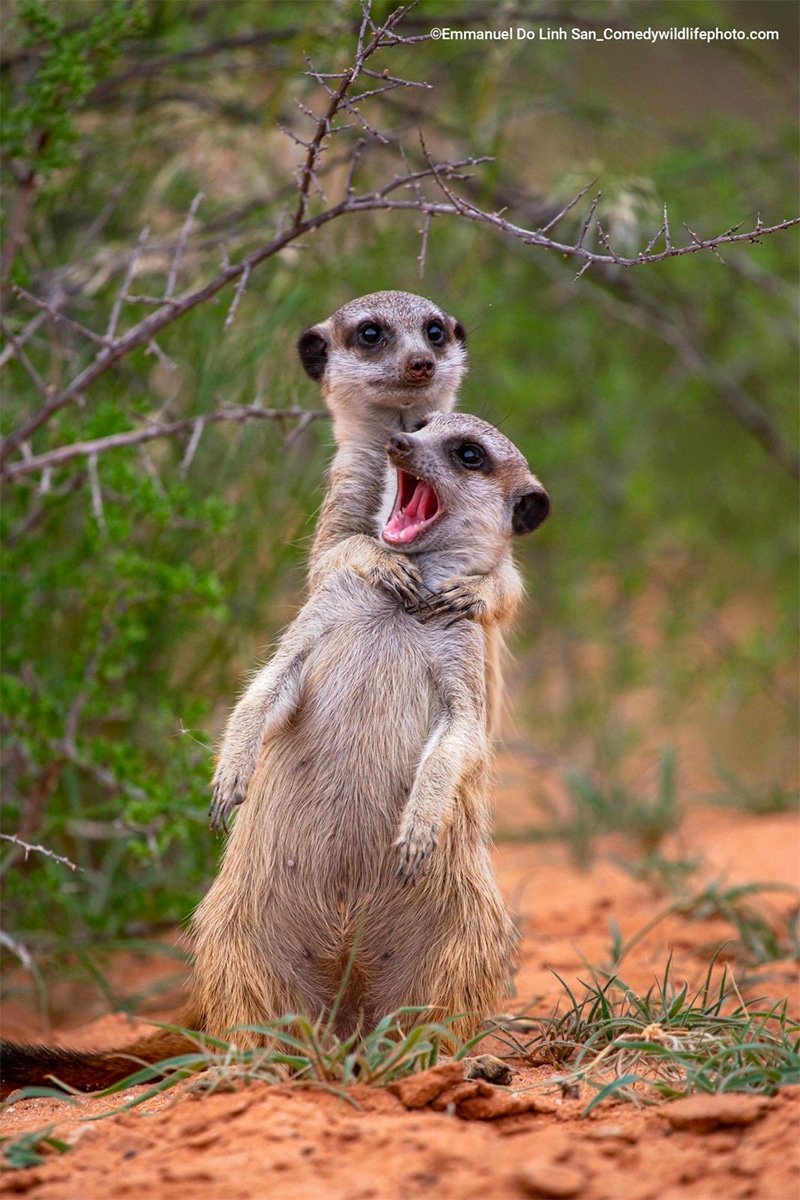 PHOTOGRAPHER: © Emmanuel Do Linh San | Comedy Wildlife 2022
“I was following a group of meerkats on foot in the Kalahari Trails Game Reserve, in South Africa. Most individuals, including adults, were in a playful mood. It gave me a unique opportunity to capture very interesting and dynamic interactions between some members of the group. In the photo that I have selected, there is no aggression between individuals, but rather an interaction that reminds us of humans when one of your friends jokes about you and you pretend to strangle them and, in response, they open their mouth like a simpleton.” 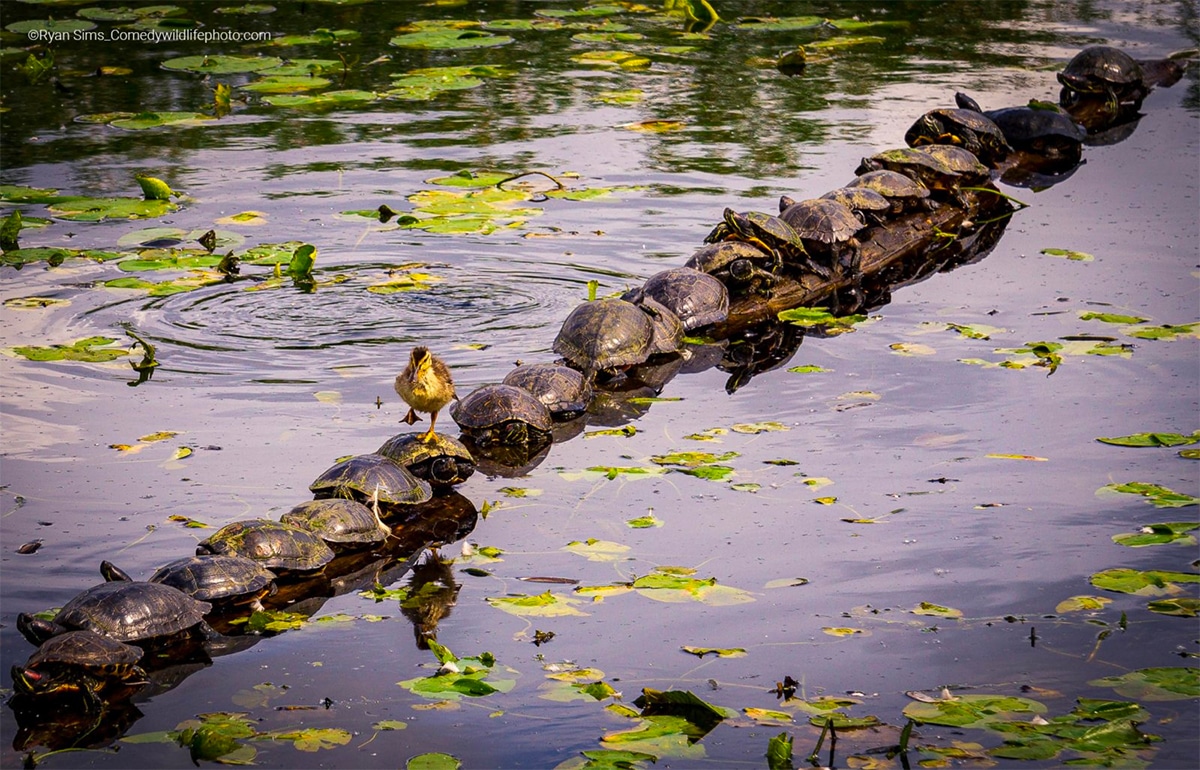 PHOTOGRAPHER: © Ryan Sims | Comedy Wildlife 2022
“A duckling walking/waddling across a turtle covered log at the Juanita wetlands, the duckling fell off after a few turtle crossings, it was cute.” 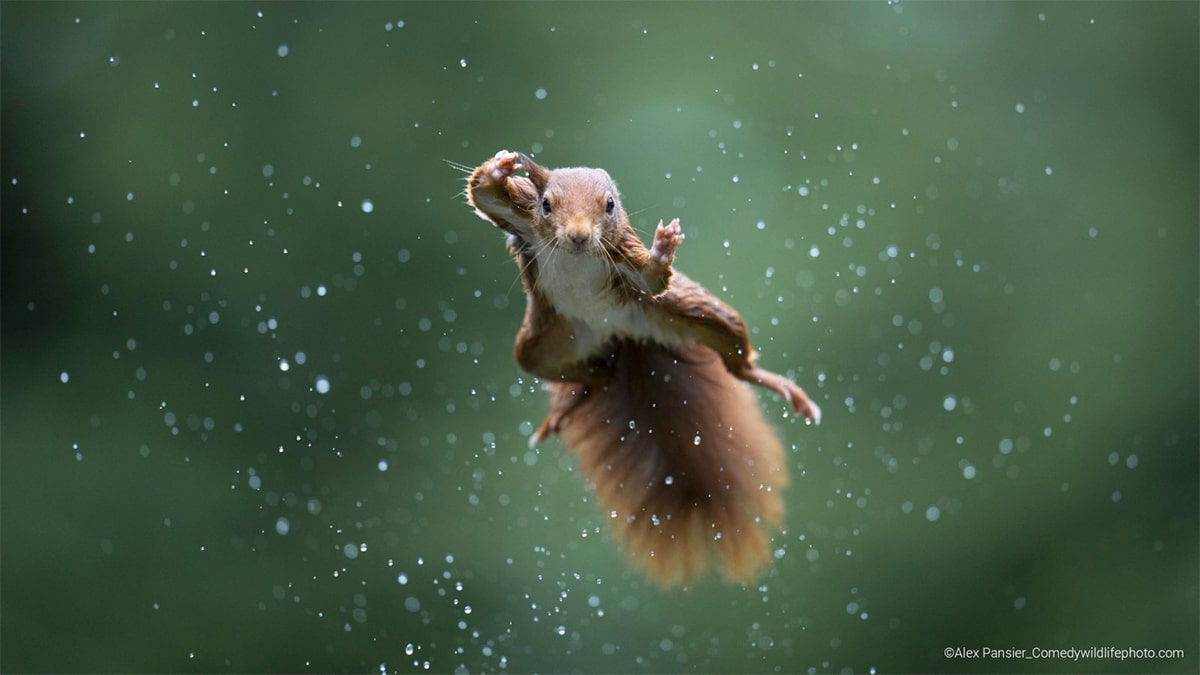 PHOTOGRAPHER: © Alex Pansier | Comedy Wildlife 2022
“A red squirrel jumps during a rainstorm, so you can see the drops flying around.” 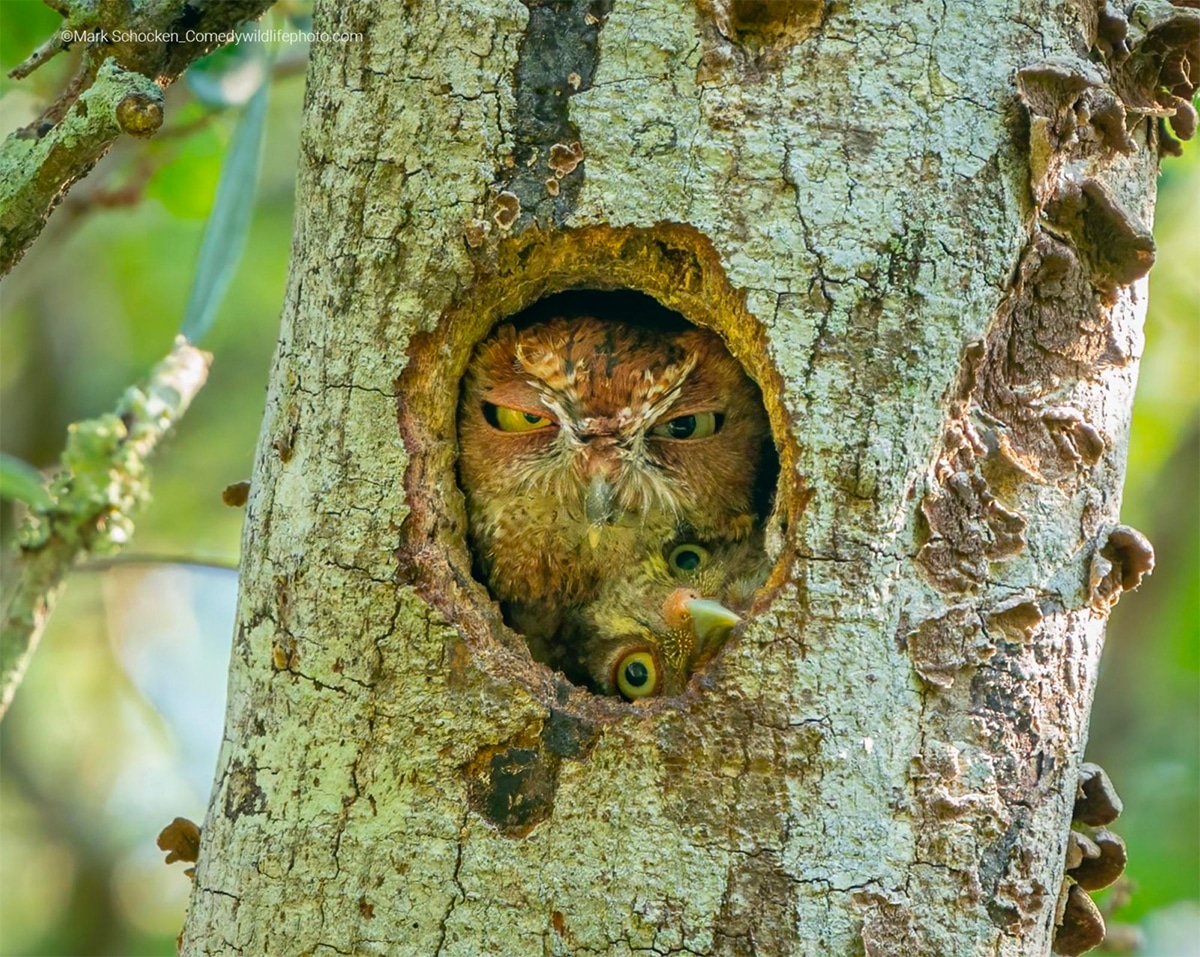 PHOTOGRAPHER: © Mark Schocken | Comedy Wildlife 2022
“I was going to see and photograph this eastern screech owl nest in a local park in Florida. One morning, a few days before the two owlets fledged, one owlet tried to squeeze into the nest hole with Mom, maybe to see the outside world for the first time. It was hilarious and I was glad I was there that morning to photograph it. The moment lasted only a few seconds as Mom didn’t seem very happy with the arrangement. Check out the expression on her face.” 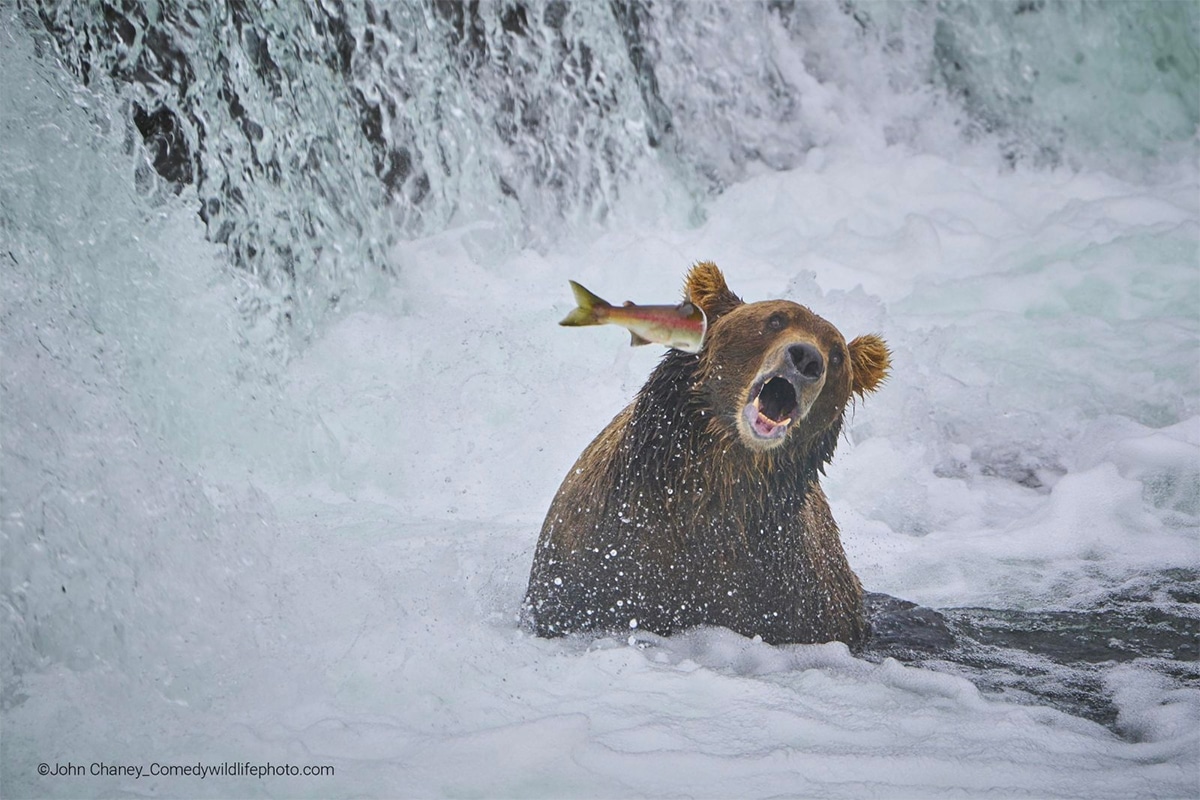 PHOTOGRAPHER: © John Chaney | Comedy Wildlife 2022
“This salmon decide to punch the bear in the face rather than be lunch.” 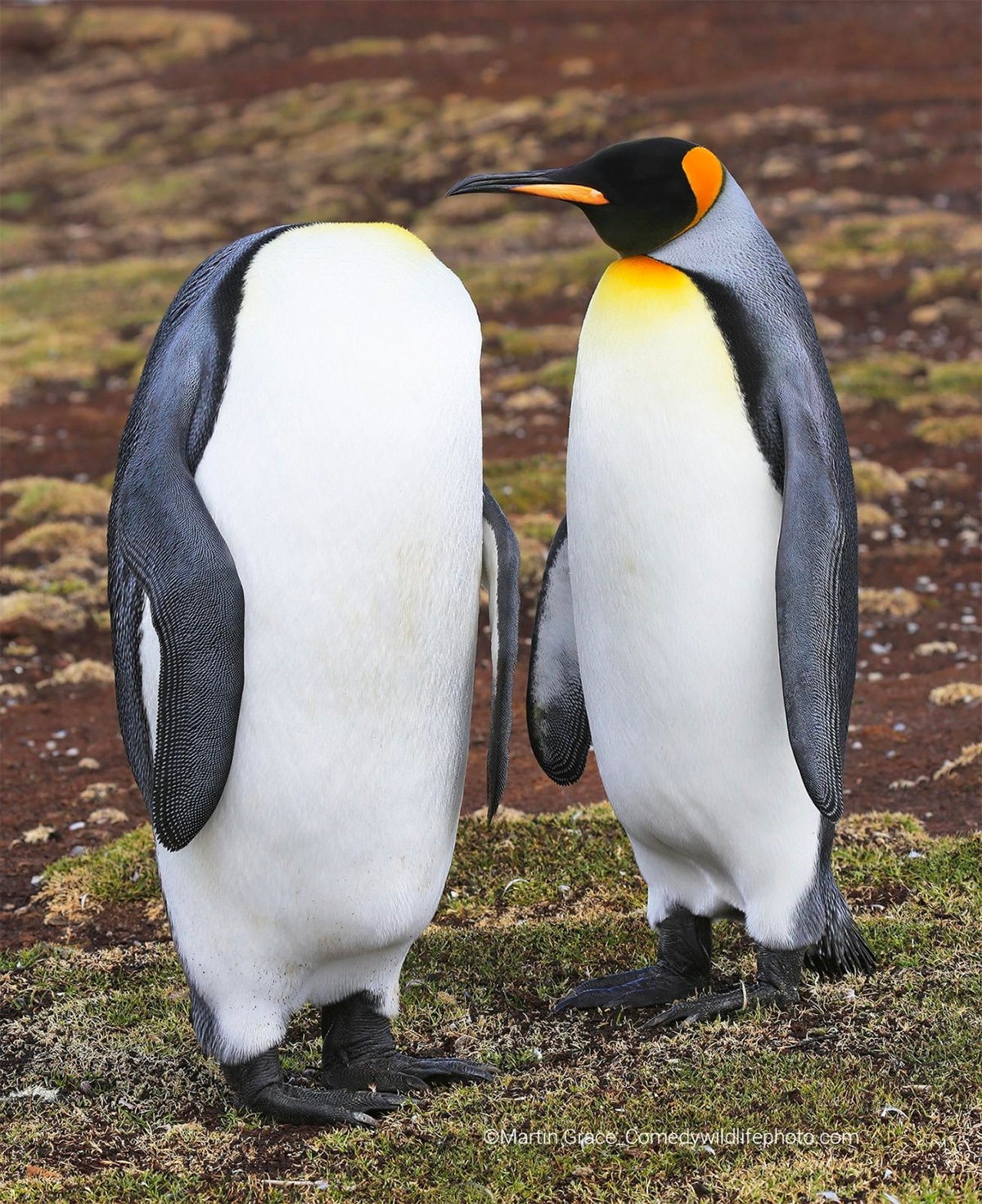 PHOTOGRAPHER: © Martin Grace | Comedy Wildlife 2022
“Two King Penguins (Aptenodytes patagonicus) at Volunteer Point in the Falklands. The right hand bird may have an inscrutable expression but it must be wondering where its mate’s head has gone. Perhaps it is a Rudyard Kipling scholar: ‘If you can keep your head when all about you. Are losing theirs and blaming it on you …”