The Major U.S. Airlines Are Still Price Gouging – Even After They Promised Pete Buttigieg They Wouldn’t 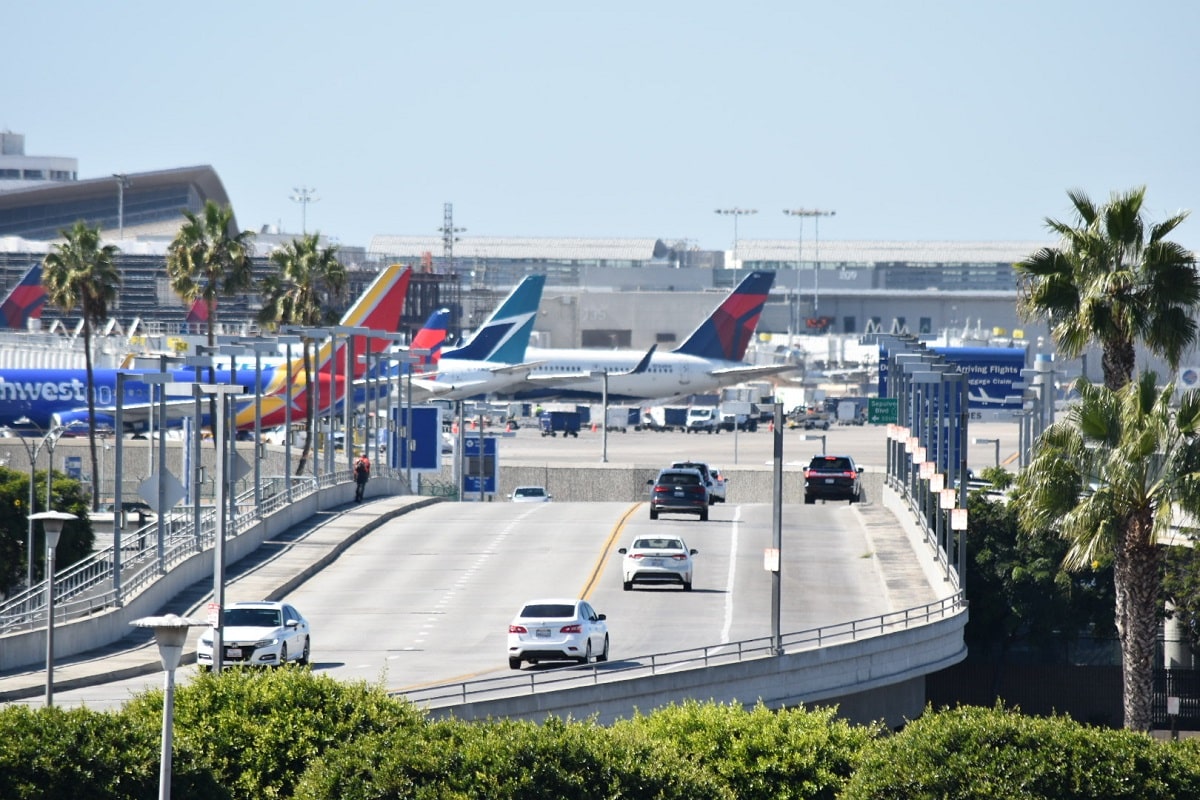 Southwest Airlines is to blame
The premise of the above article is that my family and I had to cancel our Christmas trip to Toronto (we live in Los Angeles) because my wife was sick with Covid.

I had alerts set up for what was supposed to be our return flight back to L.A. when I realized that because of Southwest Airlines’ complete and utter meltdown this week, we would have been completely screwed.

It turns out our American Airlines Toronto to Dallas flight got severely delayed so we would have missed our connection to LAX. The airlines were already flying close to capacity but when Southwest canceled over 2,500 flights each day, those 450,000+ displaced passengers per day have been scrambling to buy new tickets on other airlines. That means that any plane that had seats available were suddenly completely oversold and then some.

American’s app tried to offer me flight options for the next seven days (screenshots below). But as you can see there was nothing … and I mean nothing! … available. 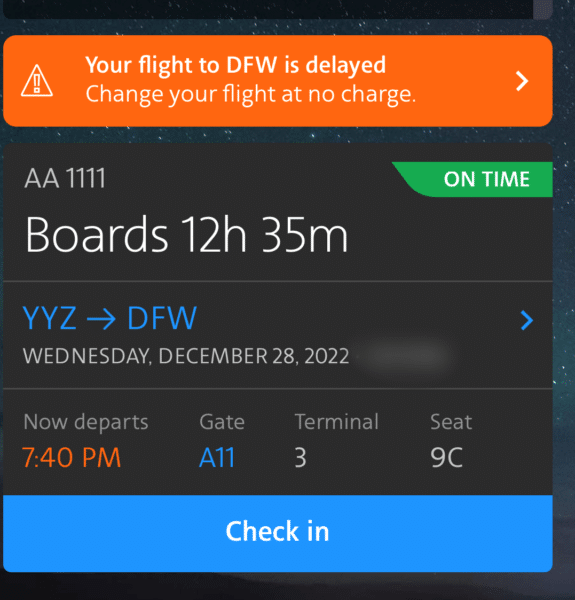 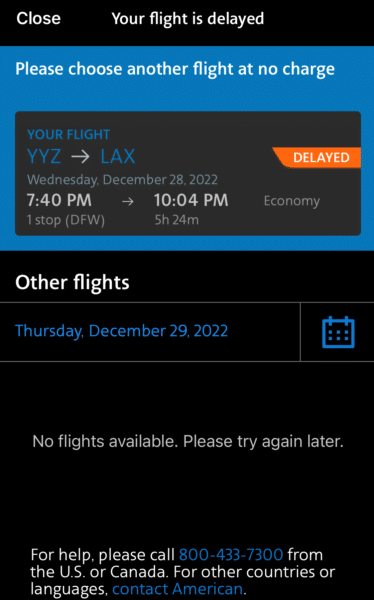 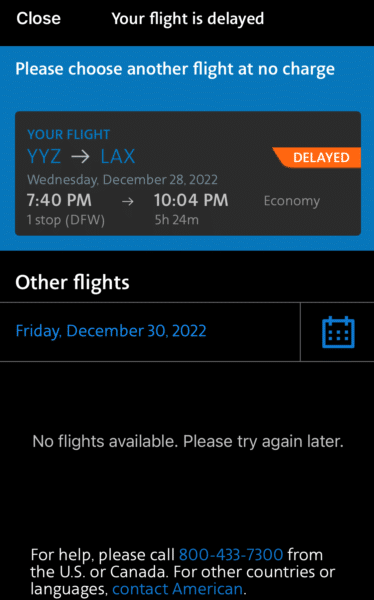 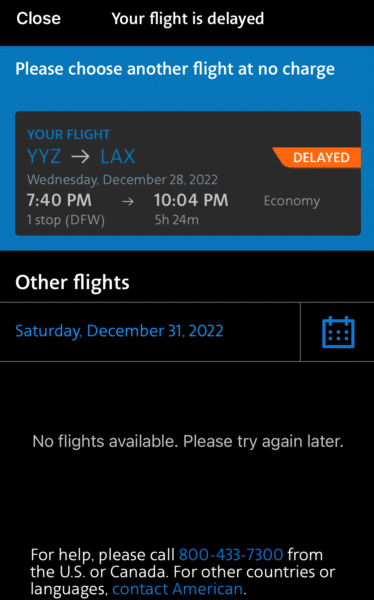 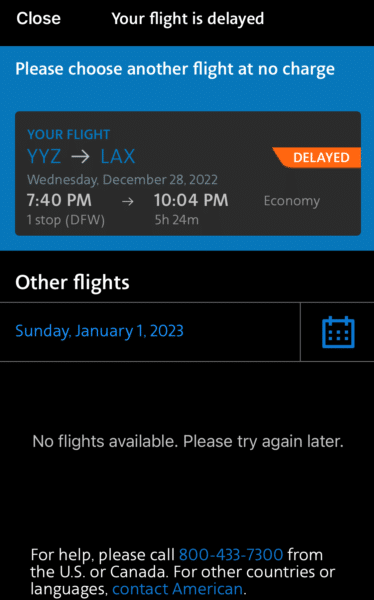 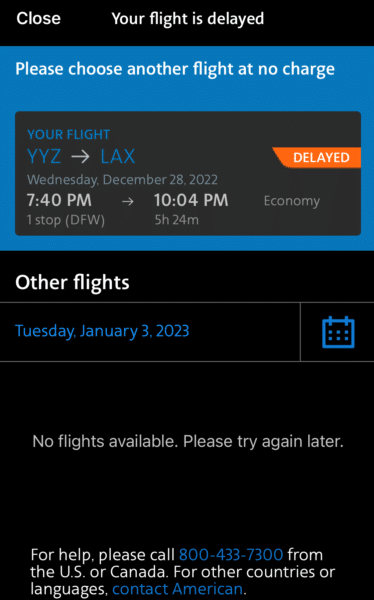 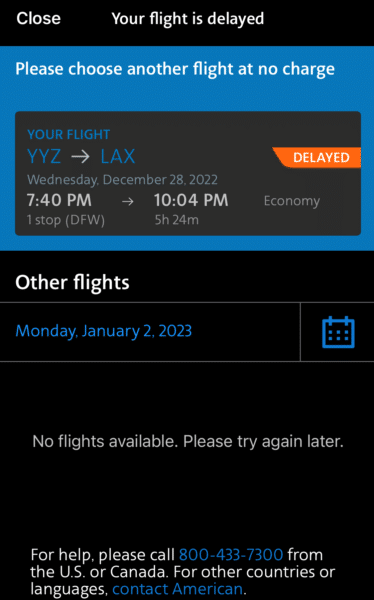 I’m really not sure what we would have done except stay in Canada for an extra week since there are pretty much no flights available for a party of four to any of Southern California’s airports (LAX, BUR, LGB, SNA, SAN).

And if there is a flight available, seats aren’t together and the airlines are charging an astronomical amount.

What’s even crazier is that according to CBS News: “Amid the frenzy of Southwest flight cancellations, American, United, Delta and Alaska Airlines tell CBS News they are capping fares between select cities.”

.@AmericanAir, @Delta and @united tell @CBSNews they are capping fares in cities where @SouthwestAir operates. There may not be many seats available. Move comes as @SecretaryPete called on airlines not to jack up prices in stranded flyers.

In an interview with Nexstar Media, Transportation Secretary Pete Buttigieg addresses the issue of airline price gouging, saying, “We’re really expecting airlines to go beyond the legal minimum and to do the right thing here. It shouldn’t take an enforcement action from our department in order to get people taken care of or get them their money back.” Watch the rest of the interview below:

As people try to rebook flights on other airlines some are reporting price gouging. @SecretaryPete tells me he’s talking with airlines to try to make sure they aren’t taking advantage of travelers. #NexstarDC pic.twitter.com/TALoyt6CsC

Now, look at the screenshots below, which were taken around 5pm ET on December 28, well after American, Delta and United said they would cap fares and not price gouge stranded passengers.

The screenshot below is for flights from Toronto, for a party of four, economy class to anywhere in Southern California.

The screenshot below is from DFW to anywhere in Southern California for a party of four in economy class on December 28. 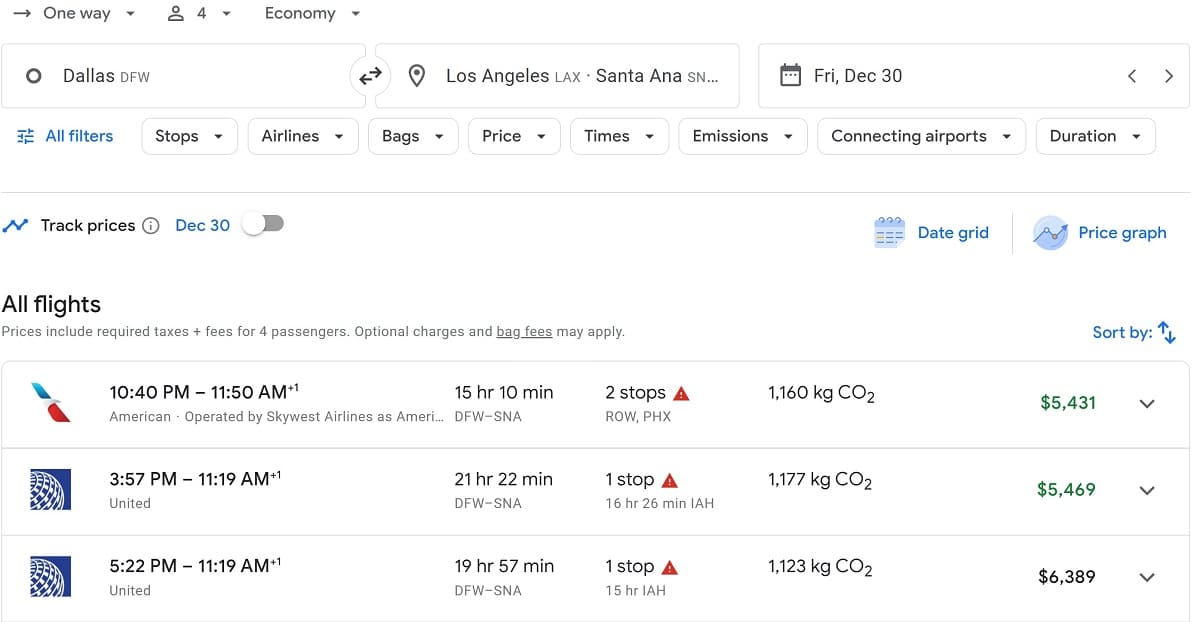 The screenshot below is for flights from DFW to anywhere in Southern California for party of four in economy on December 29th. 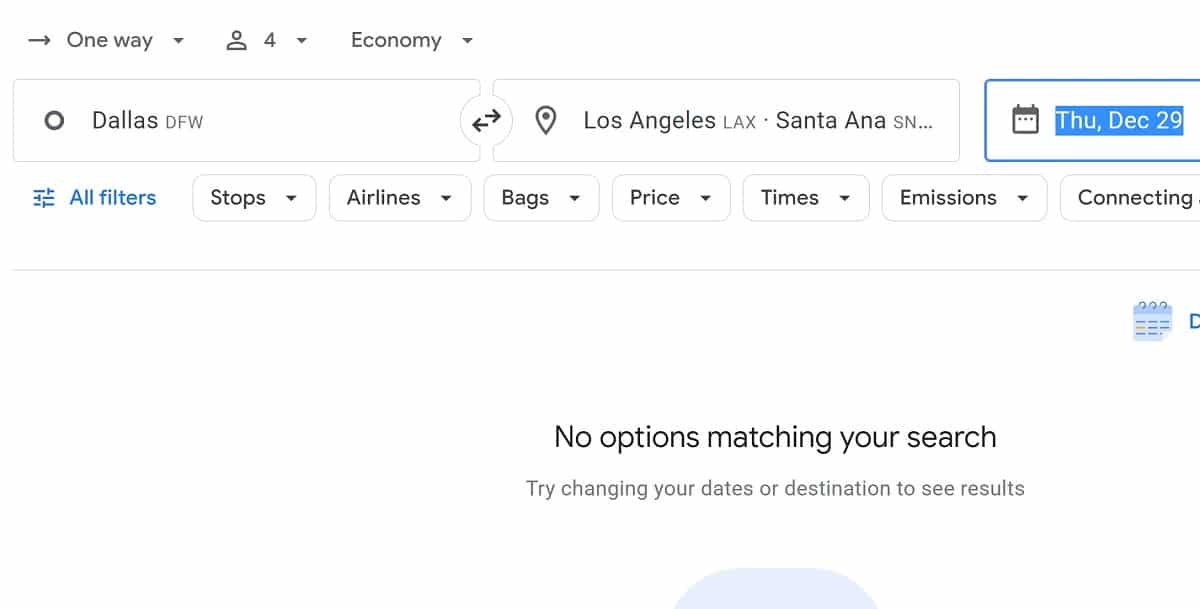 The screenshot below is from DFW to anywhere in Southern California for a party of four, economy class on December 30.

The screenshot below is for flights from Chicago to anywhere in SoCal for a party of four in economy on December 31st. 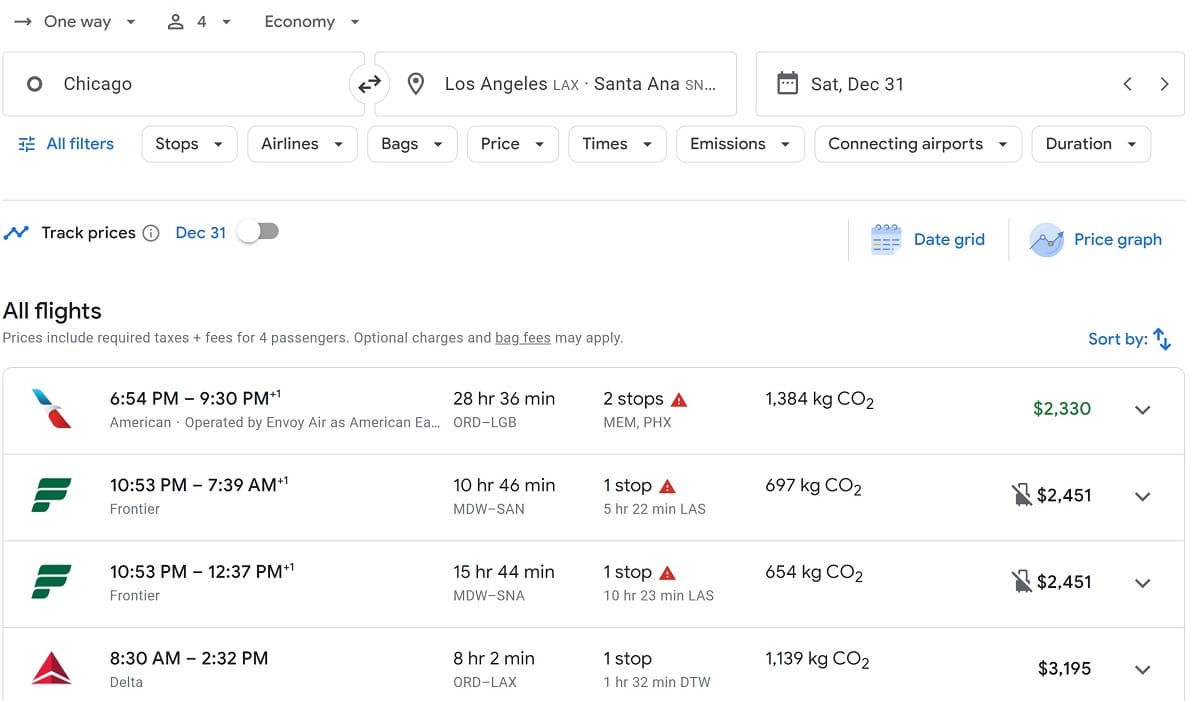 The screenshot below is for flights from Denver to anywhere in Southern California for a party of four in economy on December 30. 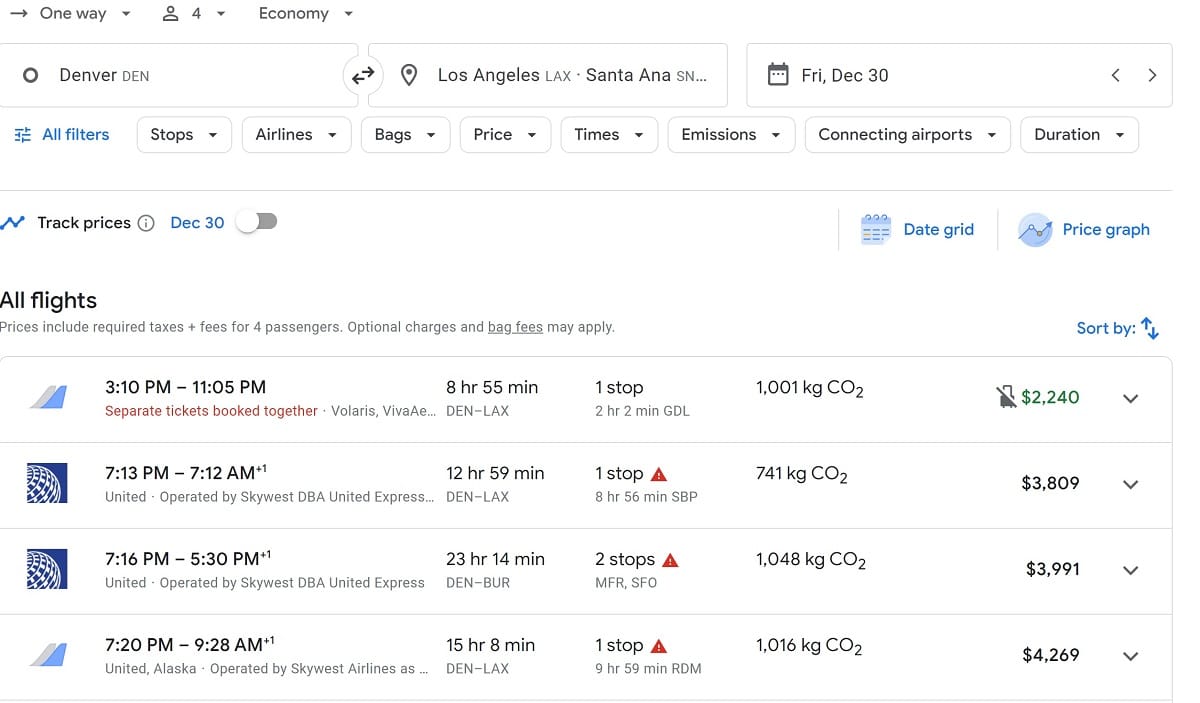 Looks like price gouging to me. What do you think?

1 Comment On "The Major U.S. Airlines Are Still Price Gouging - Even After They Promised Pete Buttigieg They Wouldn't"