Hi, I'm Georgette, a writer and artist based in Connecticut and Vermont's Northeast Kingdom. I'm also Johnny Jet’s sister, who quite possibly ignited his first spark of interest in traveling to exotic places when at the impressionable age of 14, he saw my four-week trip to Australia last three years! Whether skiing in the mountains, snorkeling in the tropics, or exploring historical cities, I'm always game for traveling and the privilege of writing for my brother's website JohnnyJet.com. Of course, coming home to my husband Cam, our dog Indigo, and my three cats Ace, Chammy and Kashmir is great, too! Check out my animal portraits at georgettepaintings.com.

The Dominican Republic holds the distinction as the most popular Caribbean destination, with Punta Cana, on the southeast part of the island, the number one choice. Tourists go for the countless hotels, the sun, the white fairy sand, turquoise water, limitless rum drinks.  Most go for their all-inclusive resorts, and some go to explore the “less beaten” part of the island. I would experience both. 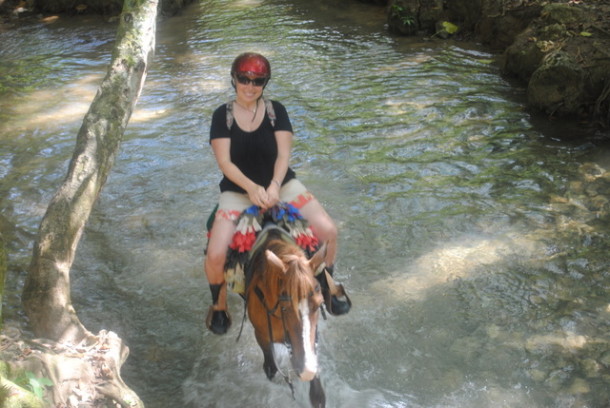 In 3 ½ hours I was transported from cold and rainy JFK to Punta Cana paradise. I flew the friendly Delta  – they make the coachers feel like business class (almost!). Most hotels have their own shuttle service. Mine cost me only $15 (a cab ride is $35) to the Spanish-owned Bavaro Beach Resort, the all-inclusive resort on the famed Bavaro beach. It was perfect for the first day, to rest, and to enjoy the sun, sand, water, drinks, and a great buffet. It was fun to see romantic couples, humongous European women in tiny bikinis, and to hear the group activities such as Merengue dancing lessons and volleyball. But the beach was crowded and I was yearning to explore the people, the land, and the culture beyond the resort limits.

Taíno Indian, African, and European traditions and history are all mingled here on this vast Caribbean Island. The scenery is diverse as well – pristine white sand, jungles, rivers, mountains, brilliant turquoise sea, and historic cities. Columbus “discovered” the island in 1492, and soon after the Europeans colonized the island. Many of the people are mixed race, and identify themselves as such. They are Creole – Spanish, French and African. Unfortunately, the native Taíno Indians were extinct within 70 years of Columbus arriving, but their spirit and culture remain in their pictographs, ceramics and the whisperings I heard in their caves.

Traveling with Tequia Experiences, got me into the heart and soul of DR – a popular nickname with tourists. The locals call it RD –Republica Dominica. It is a good idea and fun to have a little Spanish in your back pocket. Not all Islanders speak English, and who can’t deal with at least trying to speak the Native Tongue? No one is going to make fun of your bad tenses, and you may even enjoy resurrecting your high school Spanish! 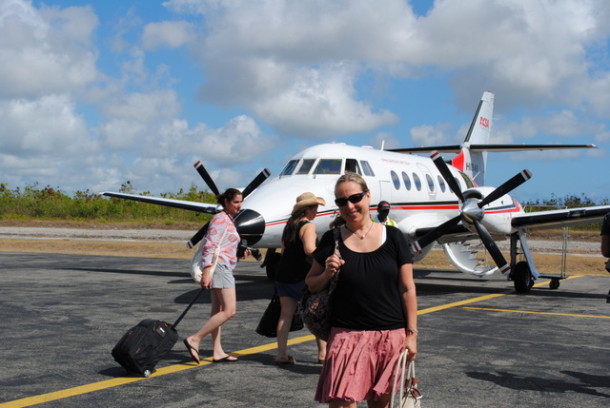 Early the next morning, I became acquainted with Waldo Tejada, our Tequia Experiences  host, and met the group I would be traveling with for the next six days. We all became fast friends. Tequia, by the way, means “guide” in the native Taíno language.

Samaná peninsula is in the Northeast, and would take hours to drive, so instead, our group boarded a charter plane from PUJ to El Catey International Airport (AZS) in Samaná (part of the Tequia package). The flight was exhilarating, quick (1/2 hour), and a great way to get to see the lay of the land. When we landed, our driver and tour bus met us, and it was a good thing it was large, because we would spend lots of time in it as we explored the Eastern half of the Island of Hispaniola. The roads were curvy on mountainous passes, and I was glad not to be driving.

Now, in the north, the views were of the Atlantic Ocean, a deep cobalt blue, lined by coconut palms and lush greenery – so inspiring. An hour later we arrived upon the quaint Fishermen’s Village of Las Terrenas, not at all touristy. We had a brief respite from the bus and heat, and I drank my first cold “Presidente” – the National beer and icon of DR. This was late April, the quiet time in DR. But just a few weeks earlier, Las Terrenas was bustling with Italians, French, and vacationing Dominicans, all there to relax in the laid-back beauty of Samaná. If we had been there a month earlier, we would have had seen Humpback whales! The Samaná peninsula is known as the place to watch the whales from January to March, when tens of thousands enter the safe haven to mate. (Next time!)

The tour bus continued snaking along the roads until we arrived at Salto Limón, our first Tequia Experiences adventure, (if you don’t count the charter plane and the bus!) a Dominican-owned sustainable and ecotourism operation that includes an hour-long horseback trek to the incredible Salto Limón waterfall. Every horse has an accompanying Dominican guide. Mine was 15-year-old adorable Manuel. He even delighted in taking pictures of the scenery (and me on the horse) with my 35 mm camera (don’t forget to tip generously). The horses are small, but well cared for, and the trek is a bit treacherous over limestone. Once we got to the waterfall, some of us jumped in. It was refreshing! Cool and aquamarine, the color of the DR gemstone – Larimar. It also has alleged mystical powers, so I was not going to miss it! At a nearby shack, they sell local jewelry made of Dominican Republic semi-precious stones, the light blue Larimar and Amber. Cold Presidente and Coca-Colas are also available. I found out that the Coca-cola here is made with real sugar, not high fructose corn syrup like the ones in the States, and actually tastes much better. Everything in the Dominican Republic tastes much better! Lunch was included in the tour – a typical home-style Dominican meal of rice and red beans, grilled chicken, stewed beef, and salad. The Dominican’s are not really into spicy food, but it was quite good, and there is always a bottle of hot sauce around. Socializing with the locals was a real treat. I found them to be humble and sincere. I also loved the perritos (small dogs!) mingling about! 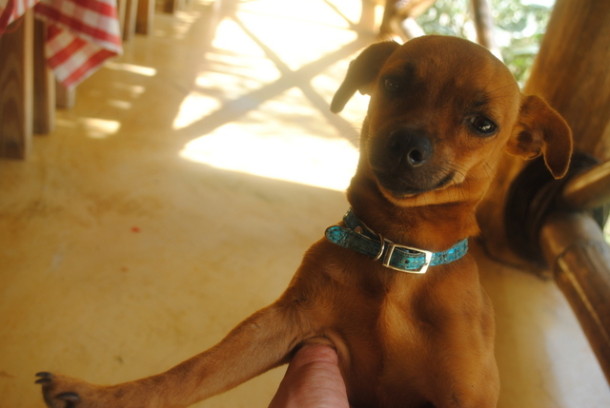 We hopped back in the bus to be driven to a slice of paradise, aptly named  “Sublime Samana” where we settled into our modern, tall-ceilinged rooms. We enjoyed the rest of the day at their long continuous pools and the private, empty beach. That night we had a memorable dinner right on the beach, at their restaurant “Savor”. Fresh caught fish, exotic fruits and a rich chocolate cake for dessert. This is a total luxury resort, perfect for families or couples wanting to escape from the all-inclusive resorts but still be on the beach. Every suite has a balcony overlooking the pool and the ocean, and hot tubs are on the deck of the two-bedroom suites (sweet!). In my next post, we will be exploring the wild and mysterious side of Samaná, the large green “boobs” and the ancient Taíno cave drawings of Los Haitises National Park! 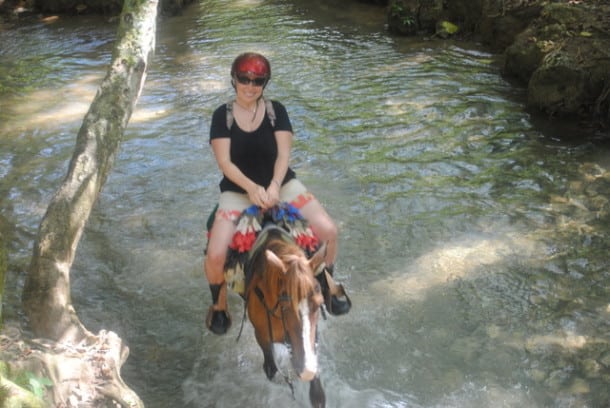 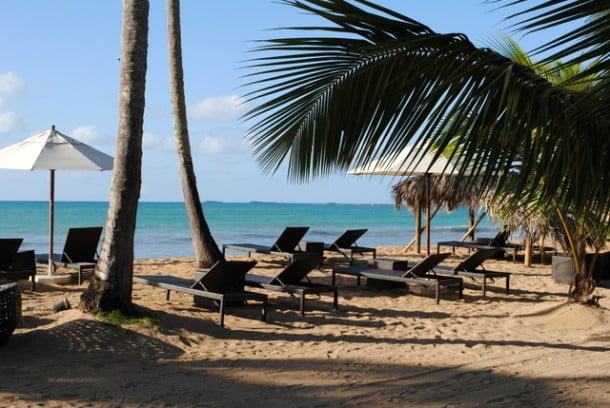 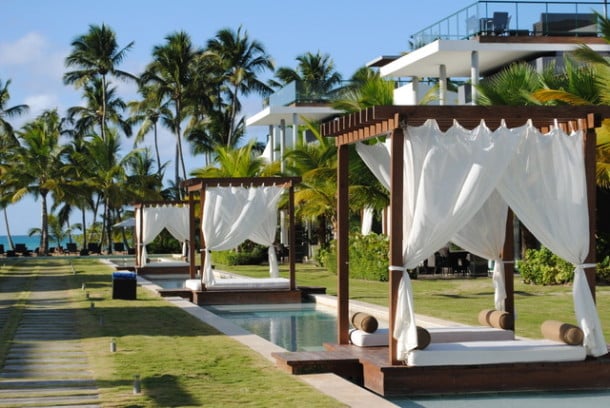 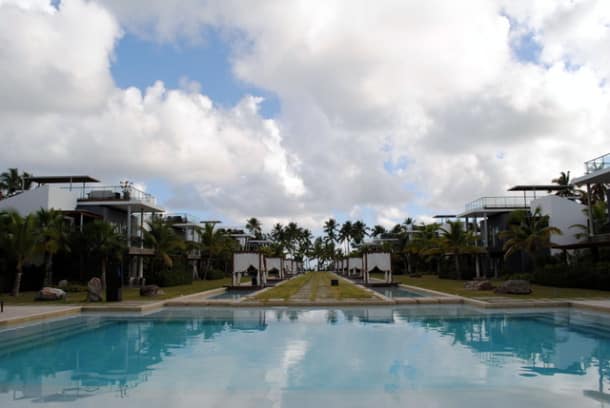 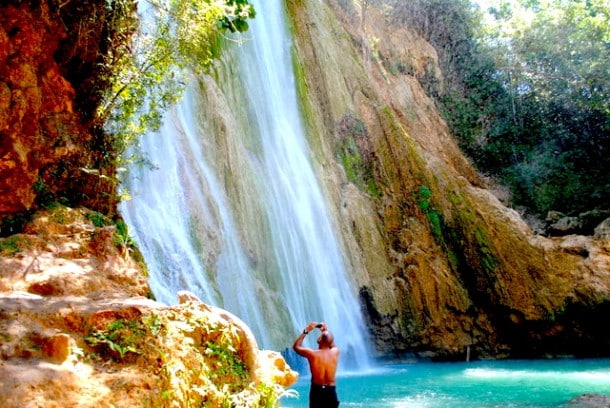 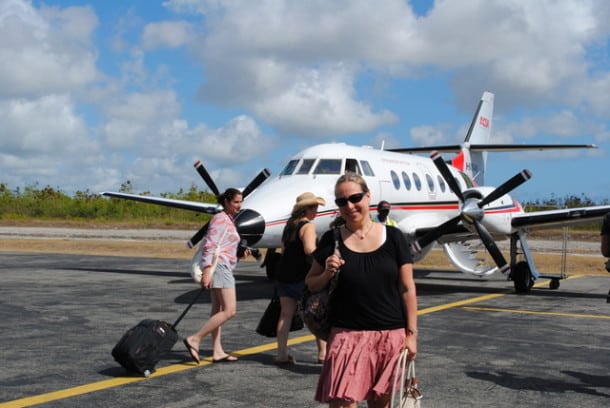 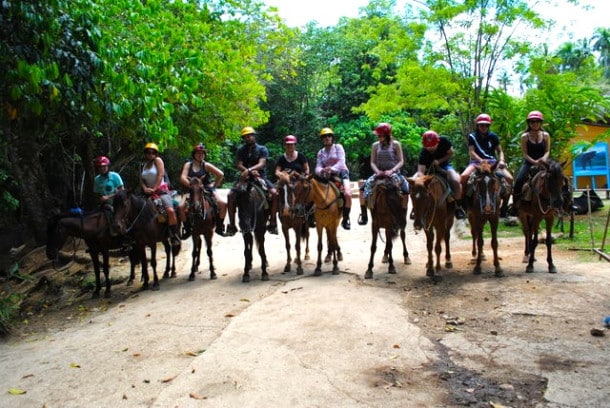 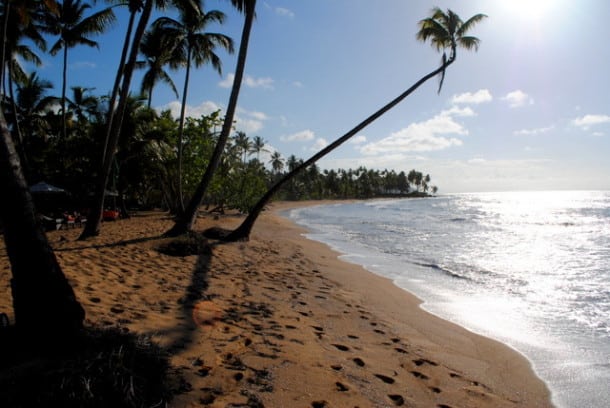 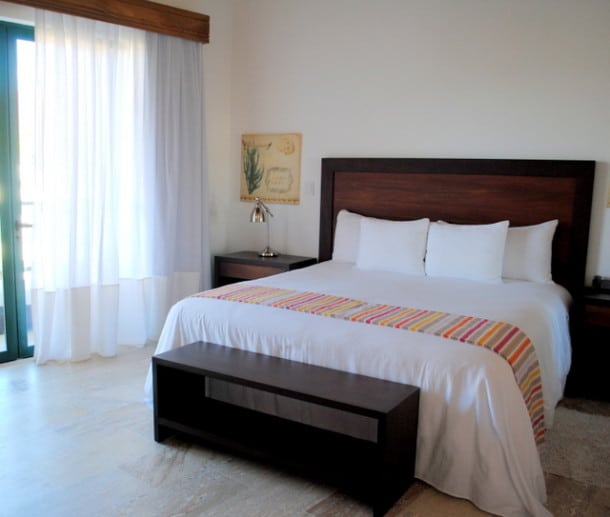 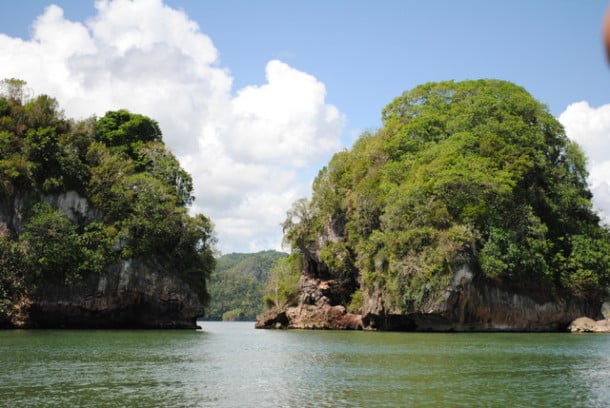 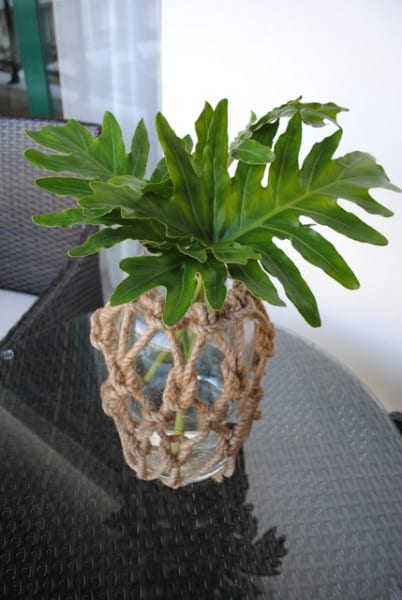 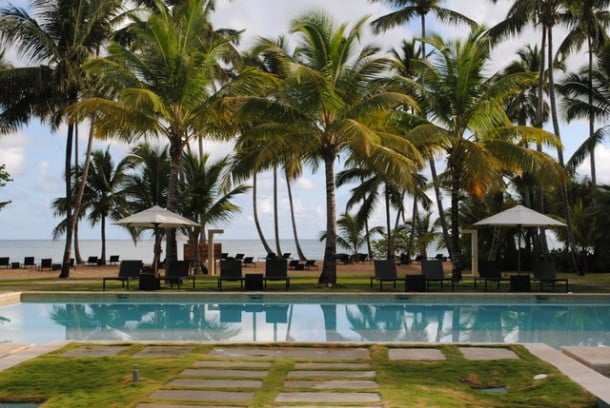 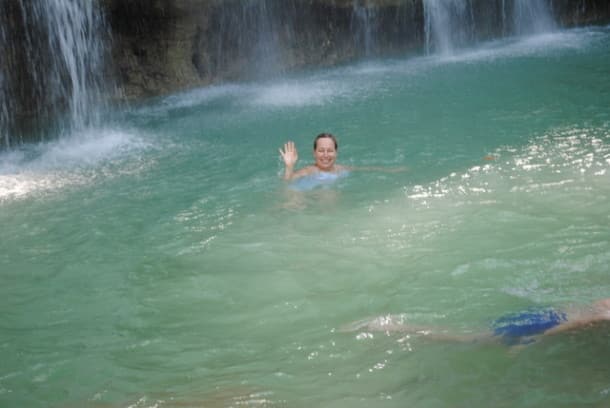 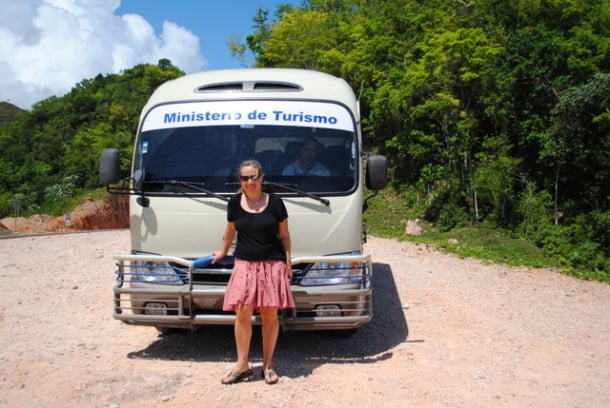 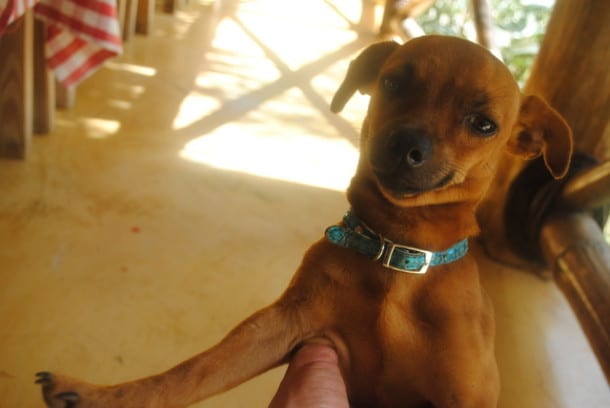 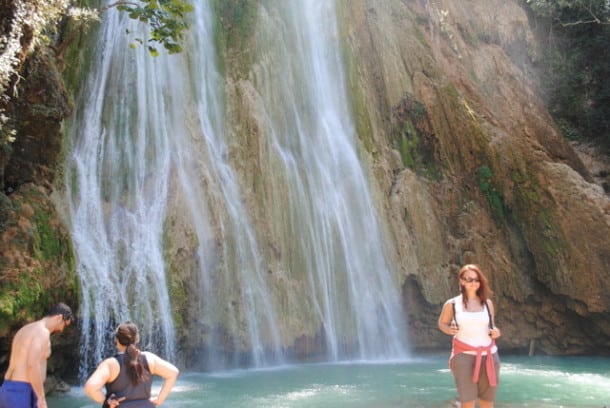 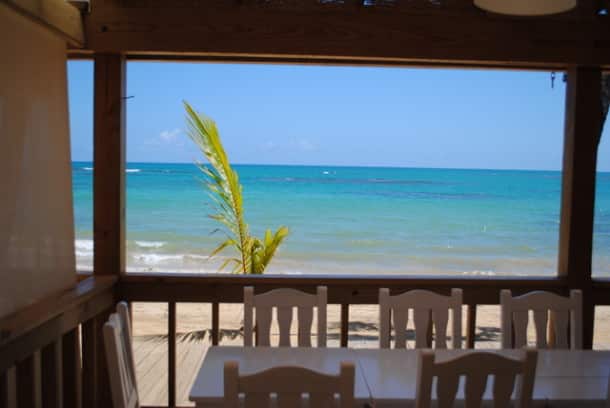 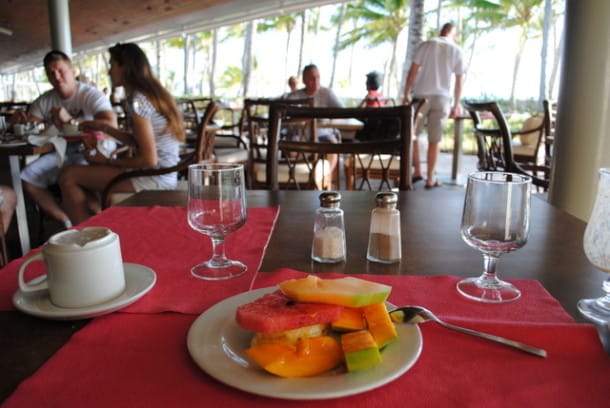 The Chase Sapphire Preferred earns 2x points per $1 on dining. 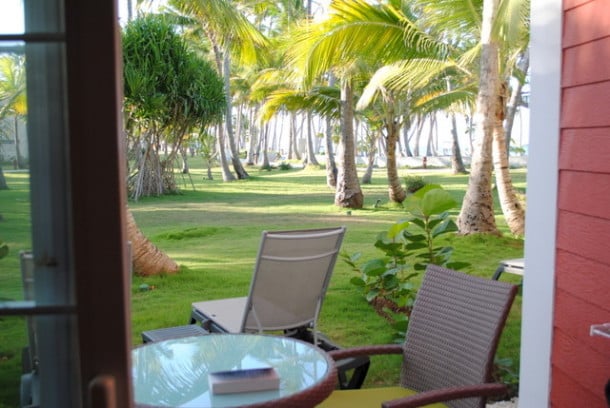 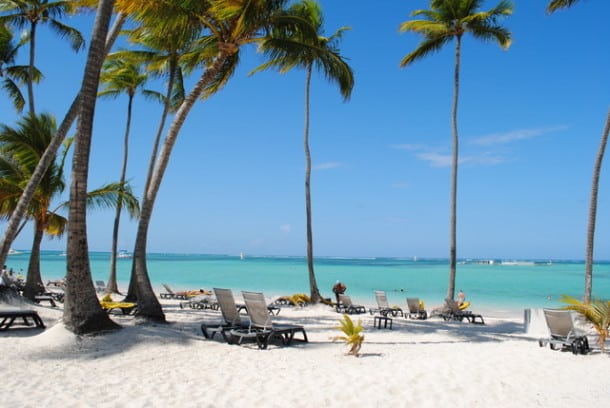 Bored in your hotel room?