If you love the Riviera, with its warm climate, beaches, chic restaurants, ‘glam’ hotels and “the scene” without the seemingly French arrogance and pompousness, the Riviera de Fiori, Riviera of Flowers or Italian Riviera, just a few clicks south of Menton, offers the same loving and beckoning atmosphere with a much-more outgoing and pleasing personality.

The Italian’s love for their own brand of “joie de vivre” beats the pants off the sometimes stuffy French and their seemingly “know it all attitude.” Mind you, I do love French people, and I certainly love France – and I must have a French fix in Paris, Cannes or San Tropez at least once a year, but if it were a matter of choosing one, Italy, and its magical Ligurian coastal region, wins hands down.

I guess it’s the love of the sea in me that keeps traveling back to Liguria, and in particular, the small beach town of Alassio, situated midway between Genoa to the south and the Italian-French border to the north.

It was 18 years ago that I got really lucky and happened on this mostly off-the- beaten track small beach town on the Italian Riviera.  Easily accessible by train, bus or car, Alassio, is one of Italy’s most beautiful vacation towns, known pretty much only to its residents and the high-rollers of Milan, Torino and Rome, many of whom keep beautiful and expensive villas in the hills above the town.

The town dates back to pre-Roman times, as it is located on the Via Augusta, the road that leads to Rome.  The Ligurians first inhabited the area prior to the first millennium. Centuries later in 1540, it was annexed to the Republic of Genoa.

In order to understand my love for Alassio, one has to know how I discovered the place.  It all started with my mother-in-law when she was a teenager in Barcelona at the onset of the Spanish Civil War in the mid 1930’s.  Please note, I didn’t know her then – nor was I even born!

The then 13 year-old Angela, born and raised in Barcelona, lived for three years in Alassio during the height of the Spanish conflict.  Once the war ended, she and her family moved back to Barcelona.  Years later she married, and, with her husband, moved to Havana, Cuba, where later, my wife, Maria was born.  For obvious political reasons, the family immigrated to Miami in 1962.

So, twenty years ago my mother-in-law hankered to return to Alassio – 50 years had passed since she had been in school there. For years, my wife and I had heard Angela speak lovingly about her years in Alassio – and, of course, she spoke perfect Italian. So Maria researched the town, and through a friend in Milan, they arranged travel to Alassio. Little did they know how the town and its residents would change their lives.

Upon arriving at Genoa, they took the train north to Alassio and within fifteen minutes of arriving, while having a coffee, Angela asked the barista about the street she had lived 50 years before. The kindly barista made a telephone call to a professor friend that had written several books about the history of the area. The professor was out but his wife answered and then asked the barista, “Why are you asking?” Upon being told that a Spanish lady wanted to speak to her husband, she requested the barman to ask if her name was Angela. It turned out that the professor’s wife was one of Angela’s schoolmates! She had thought that Angela had become a nun on her return to Barcelona after the Spanish Civil War. What a surprise and joy it was for Angela to be reunited with her classmate and others from 50 years ago.

My wife’s friend who worked for British Airways had recommended a hotel in Alassio, the Aida, and upon hearing the story of Angela and her reunion with the town’s classmates, the hotel owners shared the joy and ovation. To date, these kind people, the Galtieri family that owns and manages the Aida, have become our extended Italian family as we now visit several times a year – whenever we have time to get away to Italy.

But moreover, what constantly beckons us back to Alassio several times a year is the fantastic beach, the temperate and warm weather and the great life on the Riviera dei Fiori.

The beach is long, wide, and made of real sand, not rocks or sharp pebbles as in Nice or Cannes. The water is safe and clean; and walking out into the water is a gradual decline with mellow waves. It’s not for surfers and surf boards, but more a sun worshiper’s paradise.

Alassio is an ideal family vacation spot with numerous family friendly hotels, a variety of restaurants with a wide range of cuisines, gelato shops, bars and discos, plus glamorous shops featuring the latest fashion from Milan or Paris. The shopping street, locally known as the ‘Budello,’ is a narrow passageway and the whole town participates in ‘the passeggiata’ routine, that Italian ritual of a slow stroll in the evening.

Another beauty of Alassio is that it is centrally located for all the more famous cities along the French and Italian Riviera.  Whether it’s Monte Carlo, St. Tropez, Cannes, Nice, Menton, San Remo, Genoa, Ventimiglia, Savonna, Torino or Milan, Alassio is well-located and with a superb transportation infrastructure in northern Italy to take one anywhere in the country. If you want to linger at the Cannes Film Festival or hang out during the Monte Carlo Grand Prix, Alassio is only a relatively short drive away.

One of the defining attractions of Alassio is not having to pay the high hotel rates of the nearby celebrity hotels in the more famous Riviera towns. Alassio is an easy one hour drive from either Genoa or Nice. In the event one flies into Milan-Malpensa or Linate, one may stop for a shopping sojourn at the Serravalle shopping outlet, the largest in Europe, and conveniently located adjacent to the autostrada on the way to Genoa and Alassio.

Give Alassio a try; its fabulous beaches, restaurants, shopping, and family run hotels are simply the best. Nice, Genoa or Milan are short hops from London, Paris, Rome or Frankfurt, and you’ll be immersed and then in love with the Italian Dolce Vita.

Favorite Alassio hotels: The Aida, Residence Le Terrazze or Villa Firenze; all are a short walk to the beach.

Favorite shopping: Friday market in Ventimiglia or Saturday market in Alassio; Alassio’s Budello or the town of San Remo which has lots of shopping streets and great buys. 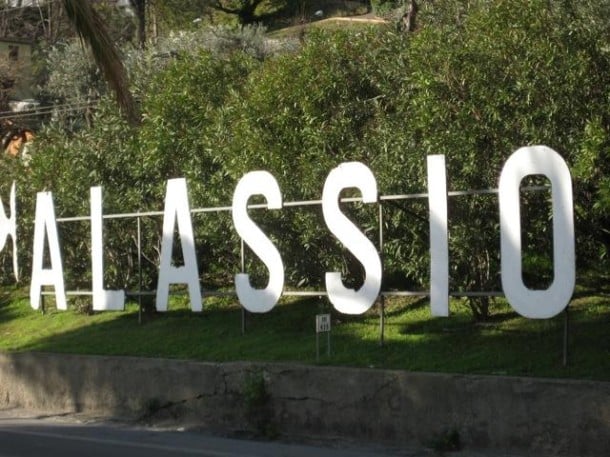 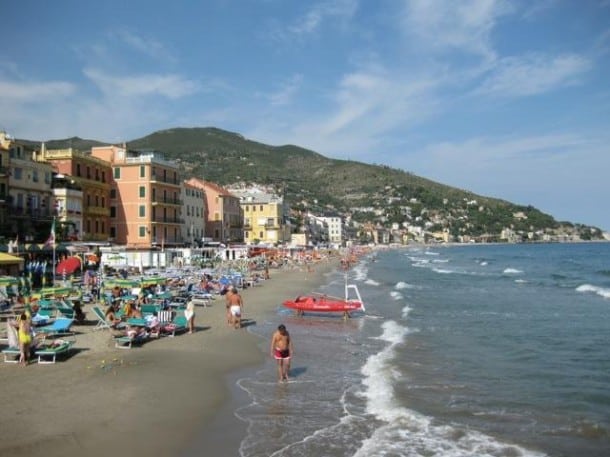 The beach at Alassio 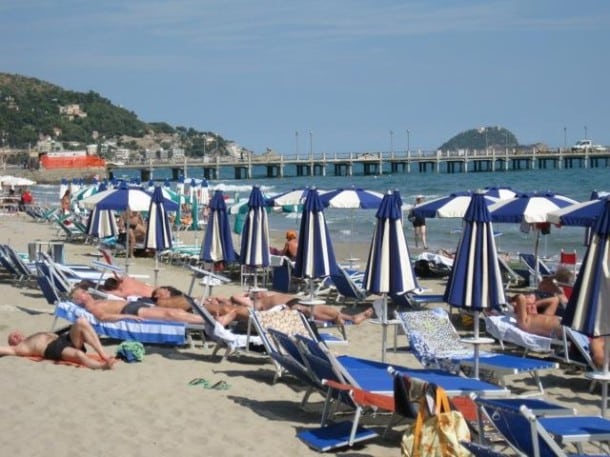 Sun worshipers on the Alassio beach 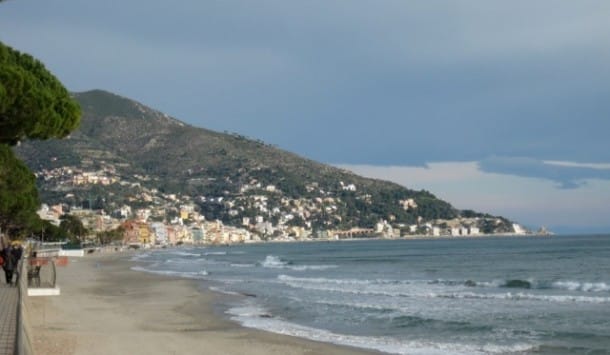 The Alassio beach in winter 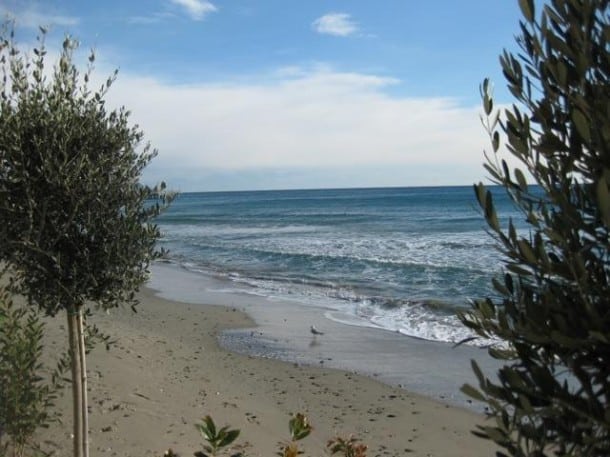 The beach is pretty deserted in the off season. 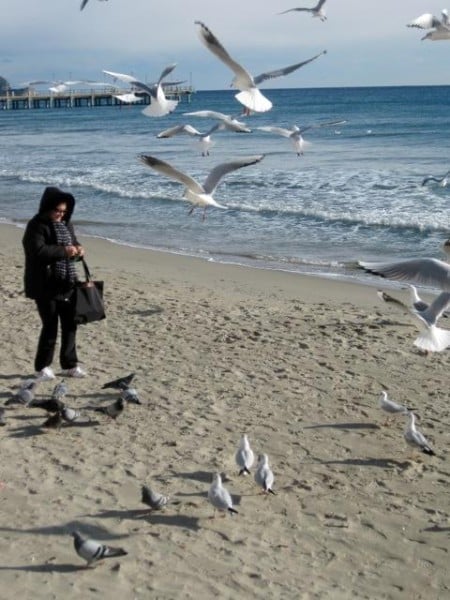 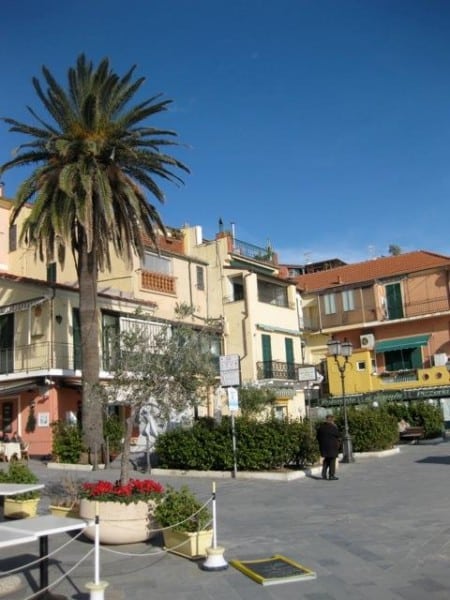