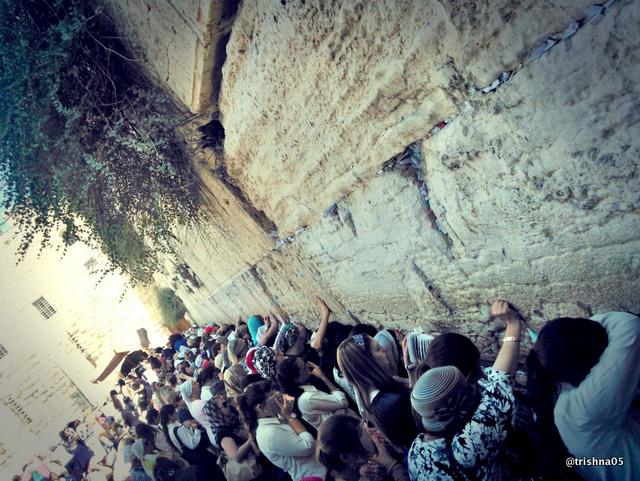 Located in the Old City of Jerusalem,The Western Wall, is the remnant of the wall that once enclosed and supported the Second Jerusalem Temple and is arguably the most sacred, recognized site in the Jewish faith. It’s also happens to be the western supporting wall of Temple Mount, one of Islam’s holiest sites.

Both faiths’ strong territorial claims in such a close proximity makes the wall one of the most contested religious sites in the world.

That being said, I only “felt” the highly charged atmosphere upon our arrival. Security is justifiably comprehensive given the ongoing Israeli-Palestinian conflict. The metal detectors at the entrance can be intimidating but as long as you follow directions and answer questions (if asked), you should pass through with no hassle.

Our group split up as men and women worship separately according to Orthodox Jewish tradition. I slowly made my way past the right side of the dividing screen, which is the area reserved for women. On a given day, you can also find eager women peering over to the men’s section (left side of the screen), proudly watching their sons read the Torah in celebration of their Bar Mitzvah.

Don’t be discouraged by the crowds of people – they aren’t as overwhelming as they seem. Just be wary of your surroundings. People may accidentally shove or bump into you, particularly those walking backwards. (Some do this out of respect so their backsides don’t face the wall.) 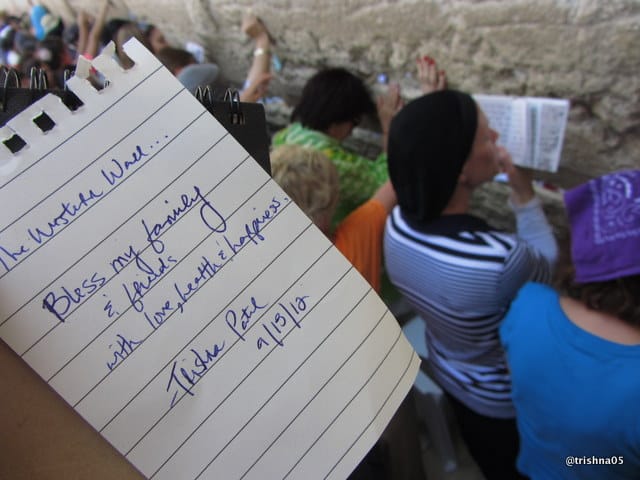 As I neared the foot of the wall, I watched as women restlessly waited their turn. When they finally reached the ancient stone, many were moved to tears as they chanted and swayed back and forth. They bowed their heads, touched the wall and left written prayers in the lower crevices. Though I’m not particularly religious, I felt compelled to do this as well. For me, it was just so incredibly beautiful to witness the spiritual experiences of others.

So why does the Western Wall touch people in such a strong way? Our tour guide said there wasn’t one simple answer, but that its significance has evolved throughout time. What began in the 160os as a place for religious mourning (for the destruction of the  Second Jerusalem Temple by the Romans in 70 AD) has gradually also become a commemoration of Jewish identity despite strained Arab-Israeli relations in 20th century (See: 1948 Arab-Israeli War, Israel’s 19 year exile, Six Day War of 1967). The common theme, however, is the wall’s symbolism for faith, hope, and healing.

Religion and politics aside, the Western Wall is a tremendously powerful place and was one of the most thought-provoking and humbling experiences of all my travels. Add it to your bucket list!

Dress Code: Men must wear a hat or take a free head covering from a box beside the entrance to the prayer area. Women cannot expose their shoulders and skirts/dresses must reach below the knee. You may also borrow the required shawls and skirt coverings if need be.

Krissy at The Old Stagecoach

With the introduction of JFK-Frankfurt-Singapore daily service, travelers can now circumnavigate the globe on the A380 with one carrier. RELATED:  10 Reasons to stay at the Shangri-La Hotel | Raffles…