Top 5 Things to Do in Queensland

I love Queensland, Australia and I’m excited about my partnership with Tourism and Events Queensland (TEQ). We’ve launched a travel blogger contest to win a trip to Queensland and if you want to go, you can enter in three easy steps! Check out how you could win here. Since our contest requires bloggers to write about what they would do with 5 days in Queensland, I thought I would kick things off with a post of my own. Here are my top 5 things to do in Queensland: 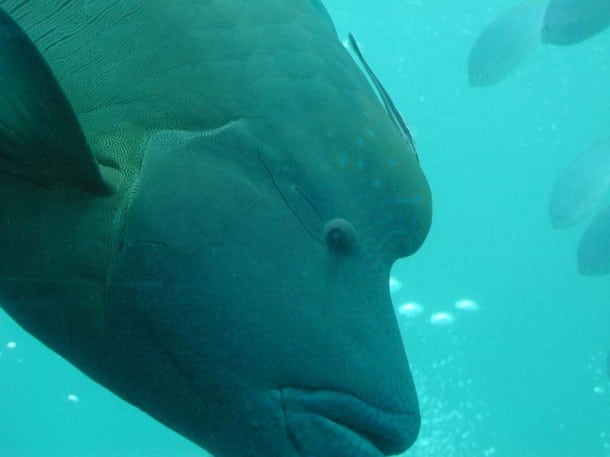 1. Snorkel the Great Barrier Reef
The first time I visited Australia was in 1995 with my college girlfriend to visit her parents who were living in Sydney. Lucky me, her dad brought us up to Hayman Island, which is the closest of the Whitsunday Islands to the Great Barrier Reef. It’s almost a sin to visit Australia and not snorkel or dive The Great Barrier Reef. It’s the largest (1,430 miles/2,300 kilometers) and most extensive coral reef system in the world and is listed as a World Heritage site. It’s made up of roughly 2,900 individual coral reefs, 600 continental islands and 300 coral cays. It’s also the only living structure that can be seen from the moon! According to TEQ, The Great Barrier Reef can be easily accessed from various points along the Queensland coast including Port Douglas, Cairns, Townsville, the Whitsundays and Southern Great Barrier Reef.  Visitors can take a day snorkelling or dive trip, stay on a coral cay island such as Heron or Lady Elliot and snorkel or dive right off the beach, or for super-keen divers, experience a live-aboard.  Queensland is also one of the only places in the world where divers can swim with minke whales. 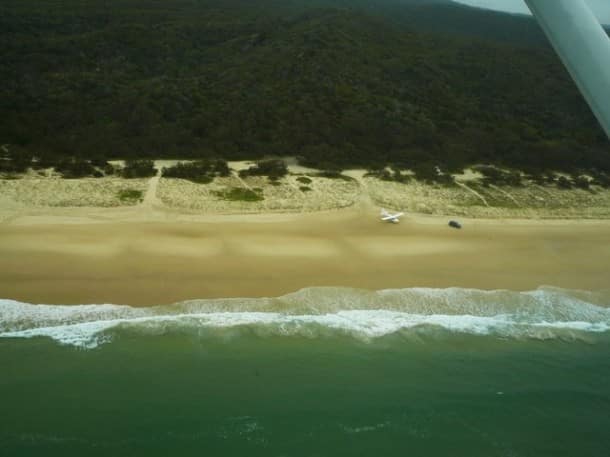 2. Landing in a plane on Fraser Island’s 75-Mile Beach
Although my name is Johnny Jet, I’m terrified of small planes. On a 2007 trip to Queensland, I took a four-seater Cessna to Fraser Island. But when I saw the plane, my stomach dropped and I wanted to cancel the trip. The cool pilot saw the fear in my eyes and said, “Don’t worry mate, I don’t want to die either.” In no time we were airborne and after the first ten minutes of the ride being as smooth as promised, I opened my eyes to see the incredible, peaceful views of eastern Australia. Slowly, I unclenched my sweaty fists and relaxed my calves. It turned out to be the biggest surprise ever; this was one of my top flight experiences of all time. There wasn’t one bump and we saw over twenty whales, a handful of giant manta rays, jellyfish and dolphins. As we approached Fraser Island, we could see 4×4 trucks cruising along the famous 75-Mile Beach. This is the beach that is also designated a national highway and runway! We zoomed in right over people fishing for Tailor fish and they didn’t even look up. An unforgettable experience! 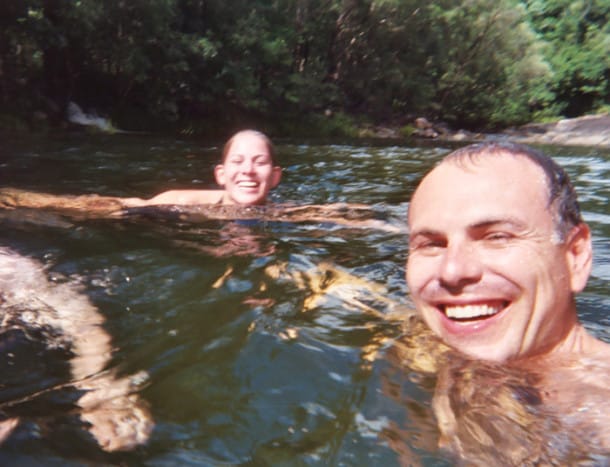 3. Cape Tribulation / Daintree Rainforest
To get to the Daintree Rainforest and Cape Tribulation (also referred as Cape Trib) I flew to Cairns (pronounced “Cans” by Australians). It’s located in far north Queensland. From there I rented 4-Wheel Drive for the approximately 3-hour picturesque drive. I knew I was in for an adventure when I read the sign on the Daintree car ferry: “No Swimming. Crocodiles.” Gulp. Good thing the car ferry took — literally — only two minutes. The moment we crossed the Daintree River and arrived on the other side, the entire landscape changed drastically. We were now in a dense tropical lowland rainforest. It felt as if the road was swallowing us alive, as we drove down its fauna-covered throat. The Daintree Rainforest is over 135 million years old, making it the oldest rainforest in the world – older than the Amazon. Although the Daintree Rainforrest covers 750 square miles, it comprises only 0.2% of the landmass of Australia. (Australia is about the same size as the continental U.S.). The Daintree is home to the largest range of plants and animals on earth. It includes 85 of the world’s 120 rarest species of plants, along with 430 species of birds, nearly a quarter of Australia’s frog species, and over 60% of Australia’s bat and butterfly species. This is the only place on earth where two UNESCO World Heritage Sites – the Great Barrier Reef and the Daintree Rainforest – come together. I explored them both. For my stories see JohnnyJet.com/Australia. 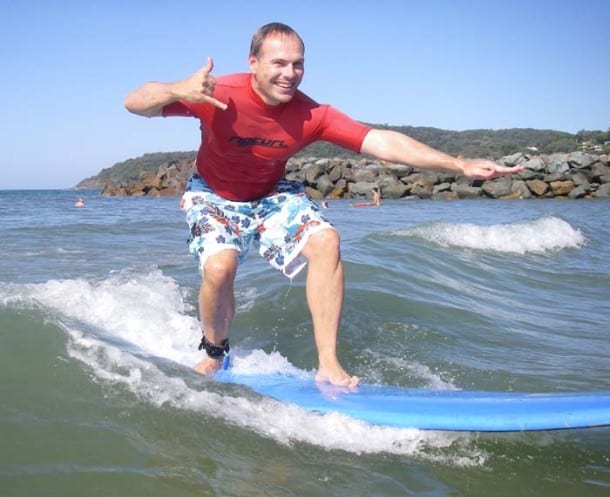 4. Surfing in Noosa
Noosa is located 160 km (99 miles) north of Brisbane, which is about an hour and a half drive. If you’re thinking about making the trek from Sydney by car, it’s 1,100 km (683 miles) … a 13-hour drive. Australians love to vacation in Noosa because of its natural beauty, shops, restaurants, beaches and most importantly, the weather. All year round, the subtropical climate is pleasant and it’s possible to swim anytime. One of the best things to do in Noosa, besides hiking the National Park, is get a surf lesson. Noosa is famous for surfing lessons, as the break is shallow, the water is warm and even when the weather is bad, the waves roll perfectly. When I was visiting, I signed up for a lesson with Merrick’s Noosa Learn to Surf School. It was $55 Australian dollars for a two-hour lesson. The owner, Merrick Davis, a World Pro Am surfing champion, greeted me but was running out on an errand so he had one of his instructors conduct the lesson. I put on my tight surfing shirt, grabbed a long soft board and walked down the tree-covered path to the beach. There were three groups of six with mostly pre-teen girls. We all made a circle around our instructor, a funny and animated French guy. Fast forward 30 minutes and we were all in the water, achieving what was promised. Everyone in our group got up on their board and surfed. The instructor was great and encouraging, especially with those who weren’t strong swimmers. A really great experience for beginners. It was a lot of fun and I was even able to flash the ‘hang loose’ sign to the photographer in the water who was taking photos, then selling CDs with the images for a reasonable $25 Australian dollars. 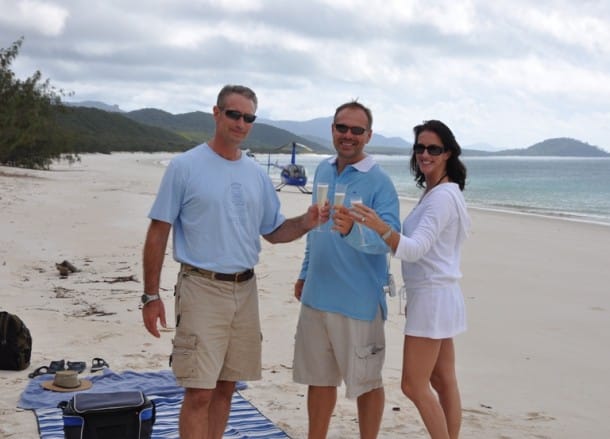 5. Helicopter on Whitehaven
I’ve been to Hamilton Island three times and one of the most popular side trips from there is to go to nearby Whitehaven Beach. Whitehaven is on Whitsunday Island, which is the largest island in the Whitsunday group. The beach got its name because the white sand is from the coral that broke off in storms from the Great Barrier Reef. The coral turned white when it died and over millions of years, as more dead coral piled up and was crushed by the wind and waves, it turned into some of the purest white sand around. It’s like talcum powder and by far the softest sand I’ve ever touched! It’s so cold, soft and clean it squeaks when you walk on it. The sand is made up of a high percentage of silica so it doesn’t get hot. In 2004, my brother arranged for us to get there by a bumpy 40-minute Zodiac ride, which wasn’t much fun. But in 2010, I went in style in a four-seater helicopter, arranged through HeliReef. The 15-minute ride wasn’t bumpy at all. We touched down on a remote part of the beach away from all the tour boats and beach goers. As soon as you step off, you can see why it is the most photographed beach in Australia, even on a not-so-pleasant day like when we were there. The pilot puts down blankets and makes your picnic spot while you go for a walk, swim or snorkel. The whole excursion was two hours and the only thing we brought was some food for the picnic lunch (the pilot brought juice, water and champagne), sunscreen, hat, bathing suit, towels, sunscreen and snorkel gear.

These are my top 5 things to do in Queensland. What are yours?

Write a post about what you would do with 5 days in Queensland and you could win a trip there! Get the full contest details here.

0 Comments On "Top 5 Things to Do in Queensland"