I was hired to do a satellite media tour and the organizers were kind enough to fly me first class. You’ve got to love having a paid first class ticket; you don’t have to wait around hoping your upgrade will go through, or buy an overpriced bottle of water to stay hydrated and of course, there’s the bonus frequent flier miles. Woo hoo!

After clearing security so quickly I decided to critique Air Canada’s business class experience from start to finish on their Toronto to Orlando service.

Checking-In
I’m a fan of Air Canada but not their website’s functionality. I think it’s crazy they won’t let you change your seat assignment more than 24 hours in advance unless you book your ticket through AirCanada.com. What’s also lame is they don’t offer mobile boarding passes or the option to email your boarding pass so you can print it later. Natalie’s printer wasn’t working when I checked-in so I ended up taking a screenshot, then pasted it into Microsoft Paint and saving it as a jpeg. I then emailed it to a friend who printed if up for me so it worked. But it was a bit of a chore. Score: 6/10

Immigration
This has nothing to do with Air Canada but I think it’s important to include. I’m now a member of Global Entry and Nexus, which was the best $50 I ever spent and it’s good for five years.  As a trusted traveler I no longer have to wait in those ridiculous immigration lines that most U.S. and Canadian airports have.

As you probably know, the U.S. government has set up pre-clearance in most major Canadian airports (including YYZ) for travelers heading to the U.S. so when they land in America they are treated as a domestic passenger. They do this to help ease congestion at U.S. international airports. And the U.S. also operates border pre-clearance facilities at some airports in Bermuda, The Bahamas, Aruba, and Ireland.

Security
Toronto Airports have always done a fine job with security. I’ve never had to wait longer than 10-minutes and now that I have NEXUS I can use their dedicated lane which has no line. In those lanes you still need to take shoes off and laptops out but none of the officers are trying to pull rank like the TSA sometimes tries to do. Score: 10\10

Boarding
When I checked-in for the flight the day before I noticed plenty of empty seats in first class – I wanted to see if it was still like that so I could possibly get one next to me. At the gate I stood in line and waited for the agent to call me. She didn’t even acknowledge that I was there for about five minutes, which is not acceptable. I know they are busy but a simple smile and a “I will be with you in a minute” would’ve given them a perfect score. She was polite once she did acknowledge me. They invite little kids and those who need more time to board first, then first class followed by frequent fliers. I think that’s the right way to do it. Unlike United Airlines which ended pre-boarding for children last week.  Score: 6/10

Seats
Before selecting my seat I logged on to SeatGuru.com to see what they suggested for Air Canada’s A319 aircraft. Row 2 (bulkhead) received high marks and since it was available I snagged 2A. Seat Guru was right as it had a ton of leg room (unlike Delta’s bulkhead on their 767-300 on my return flight). Their A319 has 14 seats in Executive Class with 38-39 inches of pitch and 21 inch wide seats that have five inches of recline. Economy class has 106 seats with 31-32 inches of pitch and those seats are 18 inches wide with 4.5 inches recline. All seats have individual entertainment systems with movies, music and live mapping. Score: 8/10

Service
The main flight attendant working first class was super friendly and she greeted all passengers with a big welcome at the plane door while checking tickets. First class service began before takeoff when she or her helper served water or orange juice and ear buds (in coach they charge $2 or $3). Then came newspapers (Globe and Mail and National Post) and food menus.

Exactly five minutes after takeoff the seat belt sign went off (we were still climbing). You never see U.S. carriers do this – usually they wait 20 to 40 minutes. Drink service began shortly after with Blue Diamond roasted salted almonds. Yum! Then hot towels. I thought it was kind of weird they served lunch and not breakfast even though the flight departed at 10:05 am. You? Lunch choices were spinach and ricotta lasagna, Turbot with lemon dill cream sauce or beef tenderloin. The tray came with a Mesclun salad and strawberry cheesecake. The food was good and service excellent. Score: 9/10

MCO
Flight time was just two hours and twenty minutes. Once we landed in Orlando (MCO) it was a long taxi (about 10 minutes). Did you know MCO stands for the airport’s former name? McCoy Air Force Base. (Although the locals joke it’s really an acronym for “Mickey’s Corporate Office.”)

MCO Tip
After taking the tram to the main terminal I made the rookie mistake of following the crowd and going down the B escalator instead of the A. I thought my driver was a no-show when really I was. Duh!

Drivers Using Tablets
I thought it was pretty cool that my driver was using a tablet for his sign placard. Don’t you? He said he’s been doing it for about six months which just shows how often I get a car service. 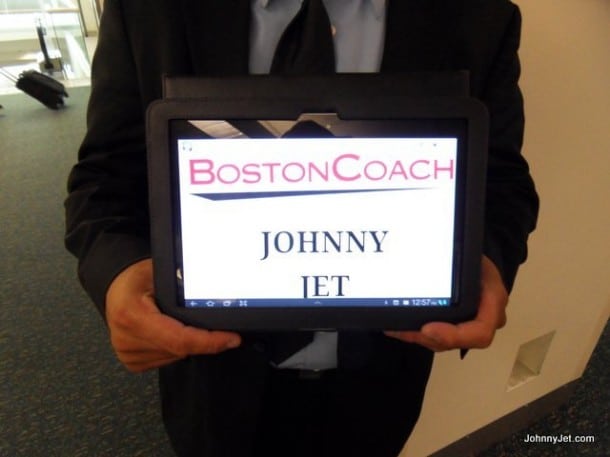 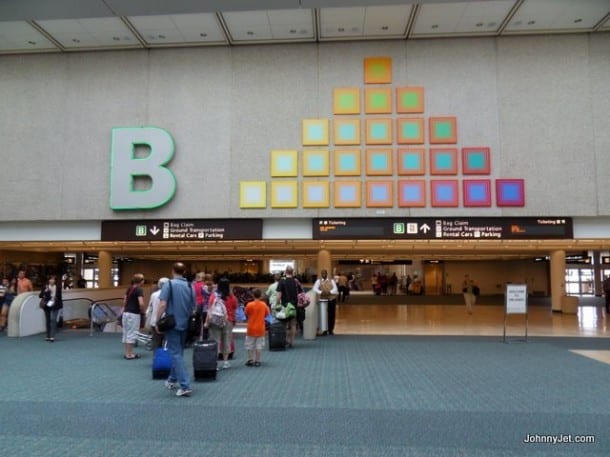 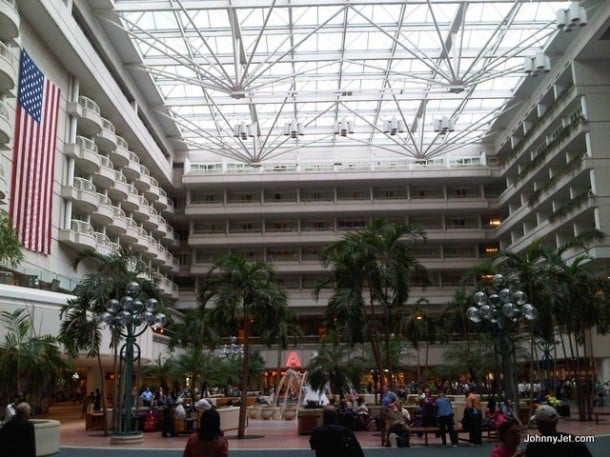 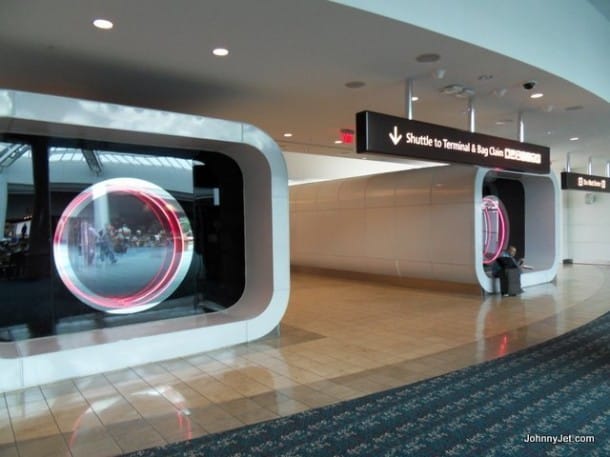 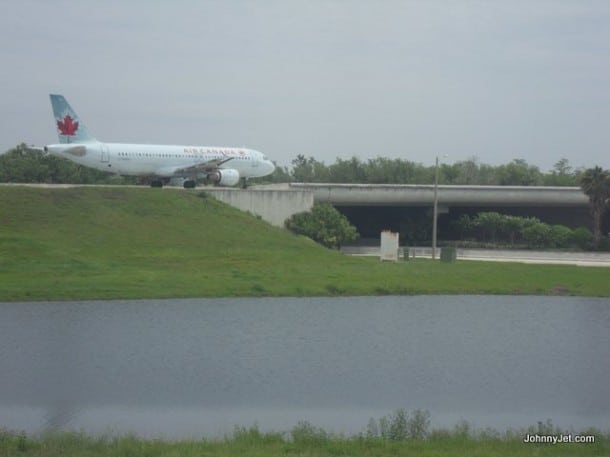 Airlines miles from the largest US and international airlines can be your best option once the economy reopens. Air Canada plane at MCO. Photo by Johnny Jet 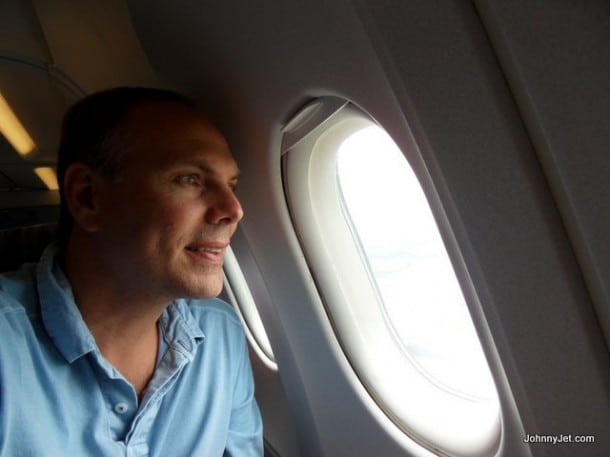 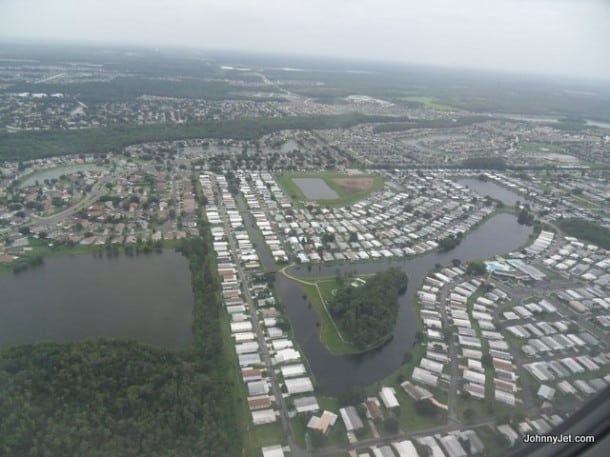 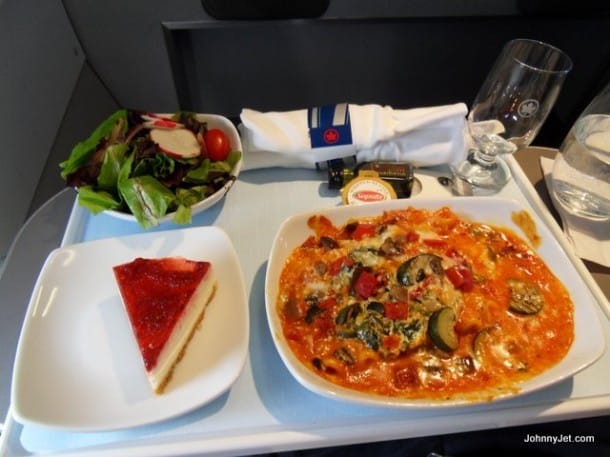 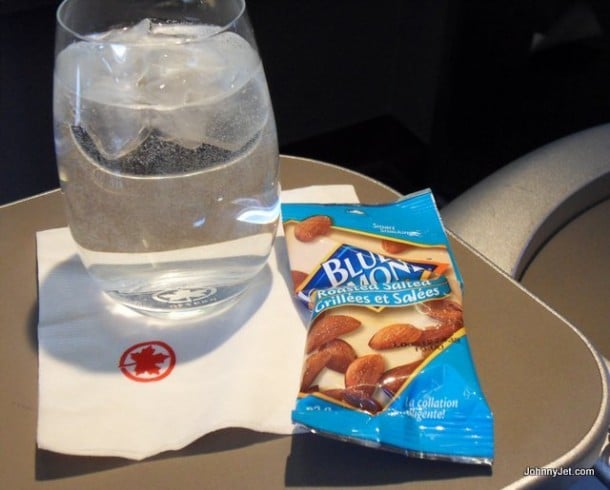 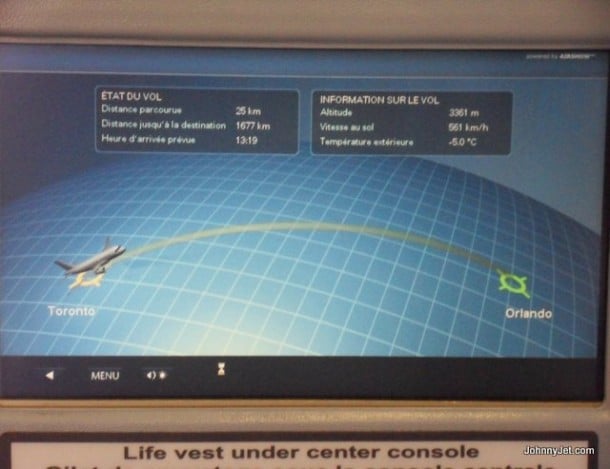 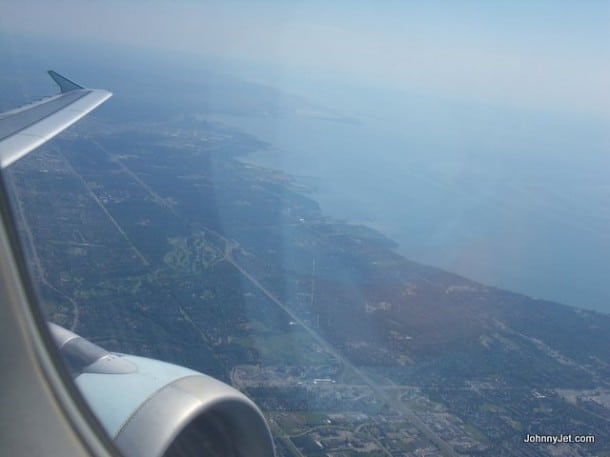 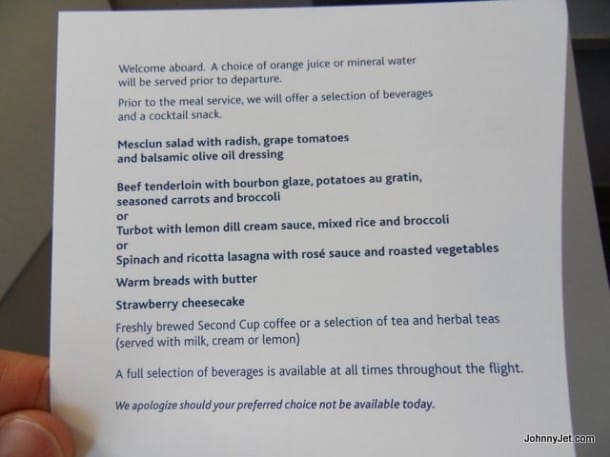 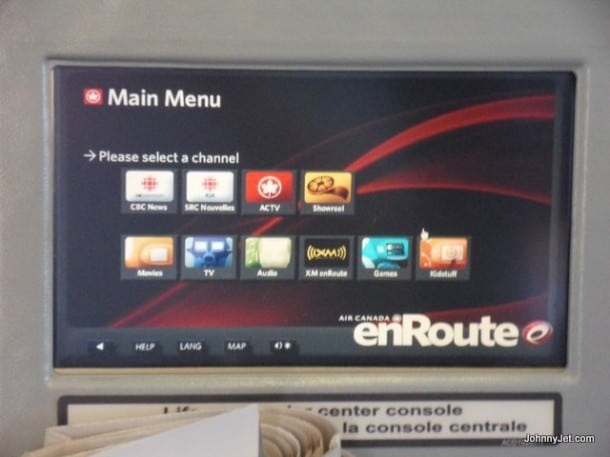 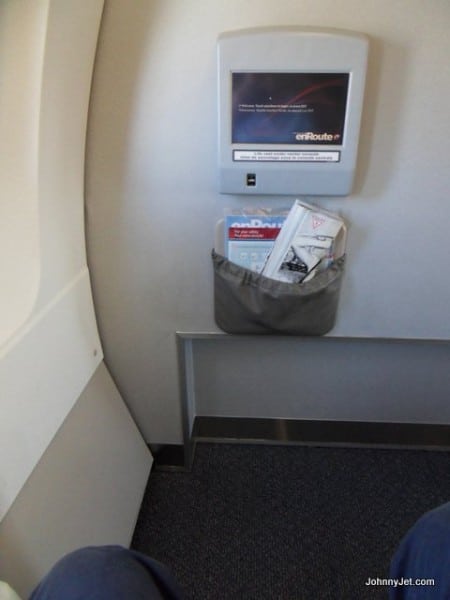 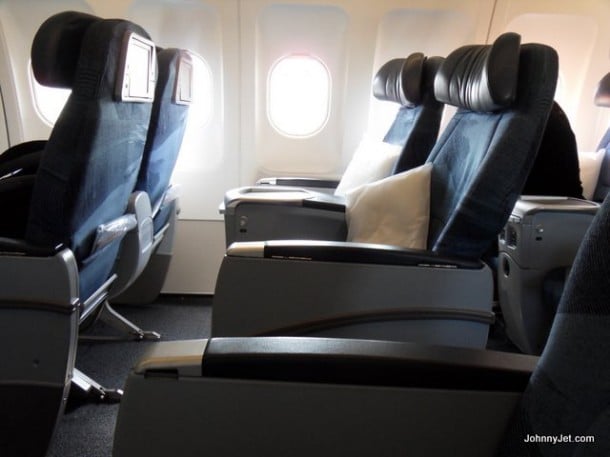 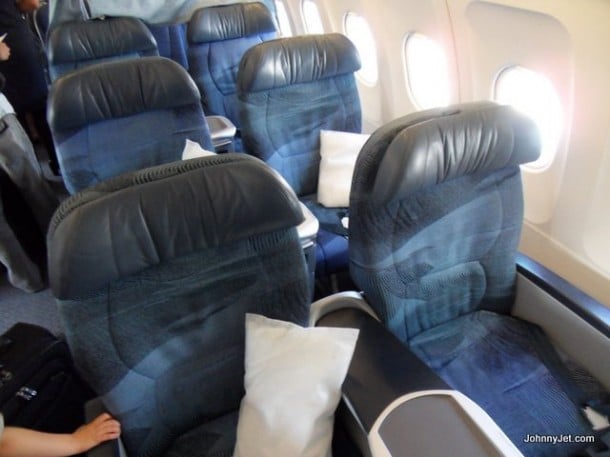 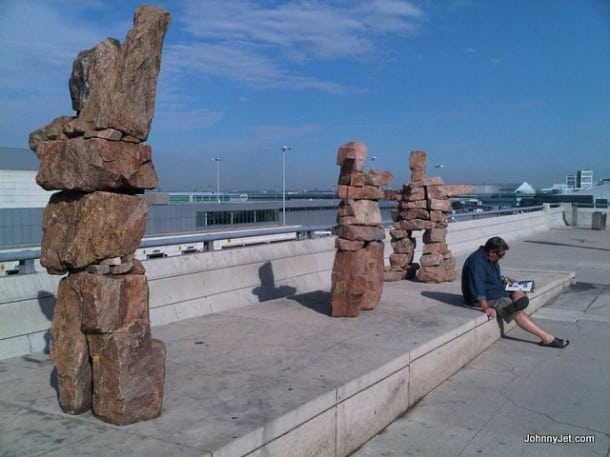