Tourism Cares: At The Gettysburg on 9/11 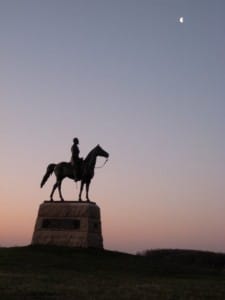 September 11, 2009 marks a day of remembrance and an opportunity for volunteers to participate in an event to preserve national historic sites. It is only fitting that an army of volunteers would descend upon the eroding Gettysburg farm and one-time battlefield hospital to help restore and pay homage to the meaning of caring.

TOURISM CARES
Tourism Cares is a non-profit public charity with a mission to preserve the travel experience for future generations. It accomplishes this by mobilizing the travel and tourism industry and travelers to give back to society through grants to natural, cultural and historic sites worldwide; through academic and service-learning scholarships for students of hospitality and tourism; and through the organization of volunteer efforts to clean up and restore tourism-related sites in need of care and rejuvenation. For additional information about Tourism Cares, please visit TourismCares.org.

GETTYSBURG
This year it was Gettysburg, before July 1863, a quiet market town of less than 2,500 inhabitants whose proximity to ten interacting roads seemed to make it the chosen land for arguably the most important battle in American history.

From July 1-3, 1863, more than 160,000 American soldiers clashed here, in what would prove to be a turning point of the Civil War. The battlefield mourned the bodies of more than 7,500 dead soldiers and several thousand horses of the Army of the Potomac and the Confederacy’s Army of Northern Virginia, and the stench of rotting bodies in the humid July air was overpowering.

While the union’s supporters and Lincoln faced looming opposition to the unpopular civil war, this major battle, an unthinkable sacrifice for so many parents and families, provided the opportune platform to reunite the cause and Lincoln, in this location, delivered the words, which will live on.

“Four score and seven years ago our fathers brought forth on this continent a new nation, conceived in Liberty, and dedicated to the proposition that all men are created equal. Now we are engaged in a great civil war, testing whether that nation, or any nation, so conceived and so dedicated, can long endure. We are met on a great battlefield of that war. We have come to dedicate a portion of that field, as a final resting place for those who here gave their lives that that nation might live. It is altogether fitting and proper that we should do this. But, in a larger sense, we cannot dedicate … we cannot consecrate … we cannot hallow this ground. The brave men, living and dead, who struggled here, have consecrated it, far above our poor power to add or detract. The world will little note, nor long remember what we say here, but it can never forget what they did here. It is for us the living, rather, to be dedicated here to the unfinished work, which they who fought here have thus far so nobly advanced. It is rather for us to be here dedicated to the great task remaining before us — that from these honored dead we take increased devotion to that cause for which they gave the last full measure of devotion — that we here highly resolve that these dead shall not have died in vain — that this nation, under God, shall have a new birth of freedom and that government: of the people, by the people, for the people, shall not perish from the earth.” 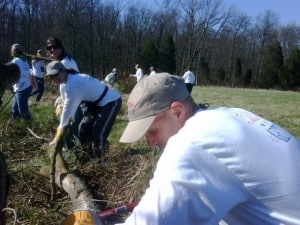 And on the morning of our day of labor, cleaning up an overgrown field to restore it to battlefield conditions, we gathered, coffee in hand to listen to the singing of the national anthem. On that day, amongst the men and women who traveled from around the country to help preserve this national landmark, I put the coffee down and my hand over my heart, and with my other hand, wiped the tears from my eyes as the sun rose over the distant Alleghany mountains.

THIS YEAR’S EVENT
Tourism Cares, a not for profit group intent upon fostering awareness and preservation of historically important, indigenous and cultural national treasures, annually arranges clean-ups and brings national media attention to sites uniquely American. On September 11, 2009 the group welcomes both the travel industry and the public to participate in an opportunity to give back to the country, and to honor all those affected by the tragedy of September 11, by conducting an unprecedented clean up of our nation’s capital.

Volunteers will help with projects at the World War II Memorial, the Korean War Veterans Memorial, the Franklin D. Roosevelt Memorial and Lafayette Park between 10am and 3pm. The sites are highly visited and will be the focus of the clean up.

WHAT YOU CAN DO
The National Park Service requires the minimum age for volunteers to be 16 and those who are under 18 years old have waivers signed by and be accompanied by a parent or legal guardian. Participation is limited and reservations must be made in advance. There is a $29 registration fee for students between the ages of 16 and 21, and a $49 registration fee for adults over 21 to cover lunch, water, tools and other supplies for the event. Registration and waiver forms are available on the Tourism Cares website, TourismCares.org.

ABOUT THE AUTHOR:
International Recreation Expert. Francis J. DiScala (Frankie D) was born to do it differently. On his first camping trip at 10 years old he was sequestered from his group for talking and forced to sleep in an open field away from the safety of the tents. He immediately realized that the moon was much clearer out under the stars and has been “out there” ever since. Never one to say no, Frank has been to Mountains of Montana, Idaho, Arizona bow hunting and sleeping outdoors, fishing off-shore amongst the whales for giant tuna, skiing and snowboarding almost every major mountain in North America, racing motorcycles on international racetracks in New Hampshire, and scuba diving reefs from Australia to the Red Sea in Jordan. fun and games are often interrupted and trips cut short by his need to return to his legal career. He hasn’t stopped talking and often can be seen and heard giving strange opinions on television shows including CNN’S Headline News/Nancy Grace and Court TV. Despite a hectic schedule, Frank has also found time to travel and write and in recent years has become an enthusiastic contributor to JohnnyJet.com, one of the most comprehensive travel resources online.

100,000 points can make it easy to see the world. Photo by hitesh choudhary from Pexels

Photo by Daniel Lee from Pexels

It's earn to earn bonus rewards while eating at home by cooking from scratch or using meal kits. Photo by Lara Santos from Pexels 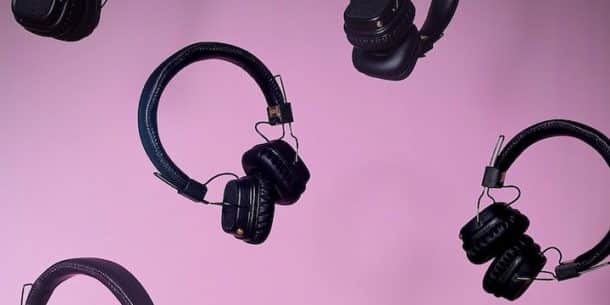 Photo by insung yoon on Unsplash

Note: This trip was sponsored in part by TourismCares.org.